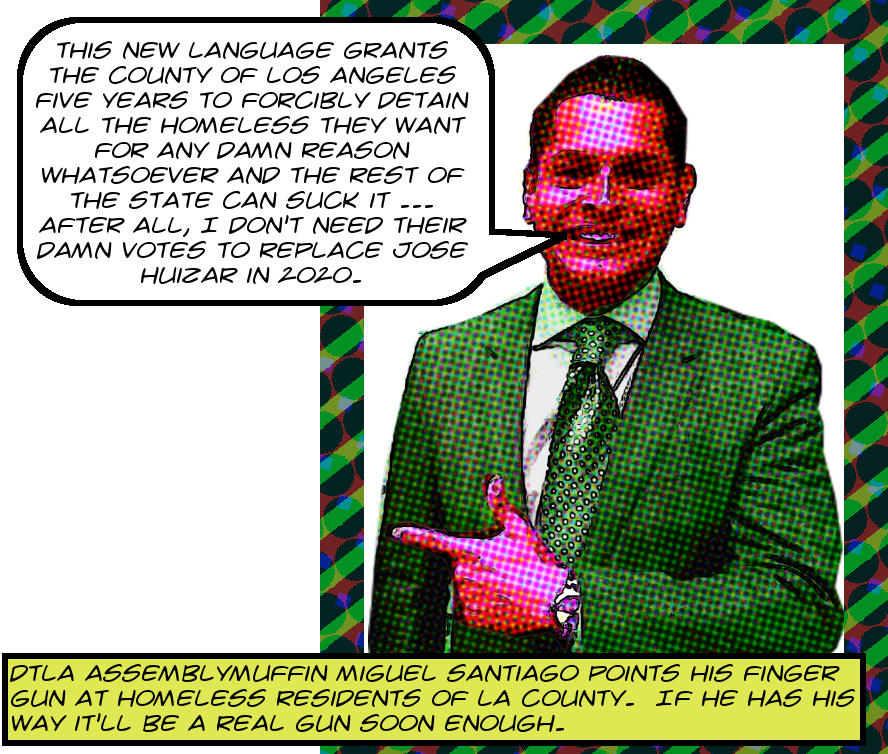 You may recall that Assemblymember Miguel Santiago, a through-and-through creature of the BIDs of Downtown Los Angeles, has been pushing a bill, AB-1971, to redefine grave disability in California in order to allow cities to lock up homeless people on even more superficial pretexts than are currently available to them.

The prospect of this, of course, has BIDs all over the City messing their jeans in joy, and therefore has our esteemed councilbabies messing theirs at the thought of the copious contributions soon to swell their officeholder accounts.1 So much did this unconstitutional jive mean to our Council that they memorialized their support in Council File 18-0002-S11 and also went about the place giving dog-whistle-filled speeches to their BIDdie constituencies.

But despite Santiago and the BIDs and the LA City Council dressing the proposal up as somehow related to compassion or other human emotions, it was pretty clear to everyone that it was nothing more than another tool to facilitate the detention and removal of homeless human beings from our streets. Thus did opposition begin to build, even to the point where, last week, the Los Angeles Times Editorial Board, in no way known for its leftie firebrandism, came out against the bill for precisely the right reasons:

… it’s odd that so much attention is devoted instead to making it easier for authorities to force mentally ill homeless people into involuntary treatment even if they are not an immediate danger to themselves or to others. Once we grab them — and remove them from whatever comfort or support structure they have managed to create — where do we put them? If we force them into hospitals for medical treatment they say they don’t want, then what?

Well, evidently the opposition grew strong enough that yesterday Miguel Santiago felt forced to amend his cynical creation. Amazingly, though, he didn’t change its substance, but only its scope. The new version, if adopted, would expire on January 1, 2024 and, most bizarrely, would apply only in Los Angeles County. Turn the page for some more commentary and a red-lined summary version of yesterday’s changes.
END_OF_DOCUMENT_TOKEN_TO_BE_REPLACED 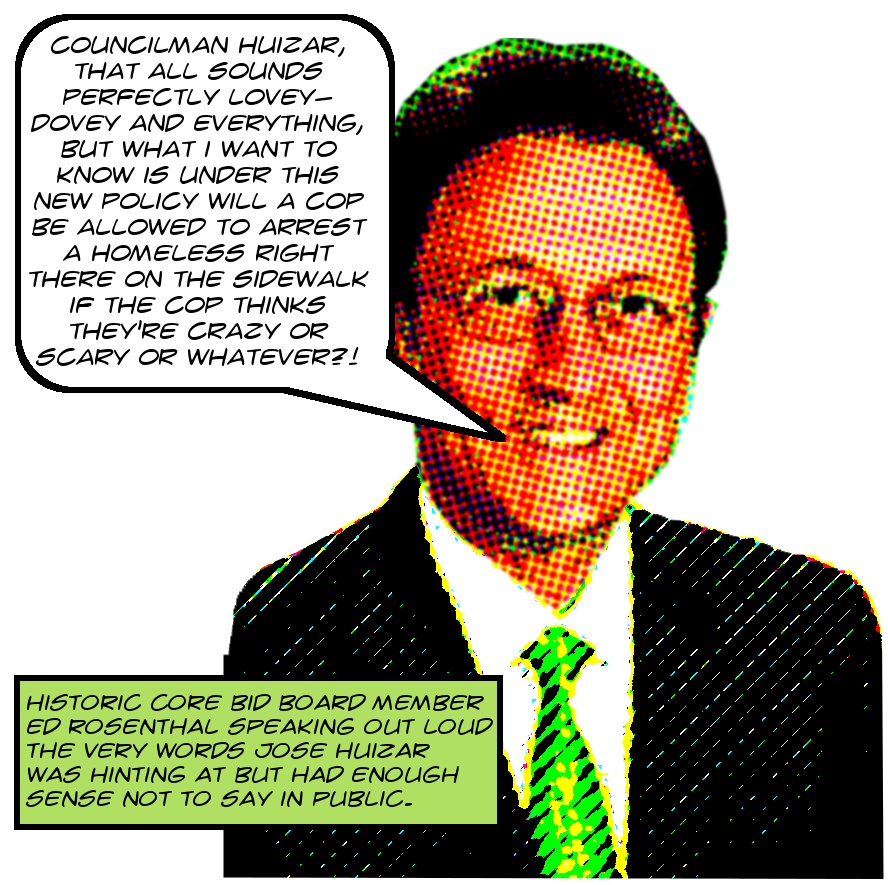 However, the very most interestingest bit was José Huizar’s announcement that he and his colleagues had just dropped a motion allowing the City to seek to have the Lanterman Act6 amended so that the the definition of “gravely disabled”7 includes refusing medical services. The whole mess can be found in CF 18-0002-S11.8 You can watch Jose Huizar talking about it and also there’s a transcription and some more snarky discussion after the break.
END_OF_DOCUMENT_TOKEN_TO_BE_REPLACED