In February, my hand forced by the mindless obstructionism of the City of Los Angeles with respect to compliance with the California Public Records Act, I filed a petition asking a judge to compel them to hand over two classes of records. First were private person’s arrest forms generated in Hollywood in 2018. The point here is to be able once again to track arrests by the BID patrol after their appalling 2016 contract amendment took these records, at least for now, out of the reach of the CPRA.

The second kind of records I’m seeking in the suit are postings to the Regional Public Private Infrastructure Collaboration System, familiarly known as RPPICS. This is some kind of cop bulletin board that a lot of BIDs have access to, and the LAPD claimed that everything on the system could be withheld from me under the so-called investigative materials exemption to the CPRA, found at §6254(f).

And it’s these last ones that seem to have cracked the case. Last Thursday the City of Los Angeles, in the person of Deputy City Attorney Jonathan Bislig, sent over this letter admitting that the City possessed responsive RPPICS material that was not exempt and yet had not been produced. And they attached four pages of material, constituting three responsive records. There’s a transcription of the letter and of one of the RPPICS items after the break, and here are links to all three:

This is not only hugely important because we finally get to see some material from the hitherto top secret RPPICS, but also because the fact that the City released previously withheld material as a result of a suit means that I’m the “prevailing party” and therefore that the City has to pay my lawyer. This was held in the monumental 1991 case Belth v. Garamendi, which interpreted §6259(d) of the CPRA thus:

In this case we hold that Government Code section 6259, subdivision (d), mandates an award of court costs and reasonable attorney fees to a plaintiff who prevails in litigation filed under the California’s Public Records Act. We further hold that the plaintiff has prevailed within the meaning of the statute when he or she files an action which results in defendant releasing a copy of a previously withheld document.

This release is also hugely important because it shows really clearly that LAPD’s original denial was completely bogus. There’s nothing investigative at all about these three records. They falsely characterized them that way purely so they didn’t have to produce them, or even search for them, for that matter. It’s shameful that LAPD, and the City of Los Angeles as a whole, treats its mandated duties under the CPRA so lightly. It’s also shameful that the only means to enforce compliance is a lawsuit.

Together, these shameful facts mean that the only possible strategy is to keep suing them until they get their act together. It’s going to be expensive for taxpayers, who have to foot the City’s legal bill and also the requester’s in successful cases, but as Sigmund Freud famously said, if you don’t pay you don’t get better. More news as I have it, and turn the page for some transcriptions.
END_OF_DOCUMENT_TOKEN_TO_BE_REPLACED 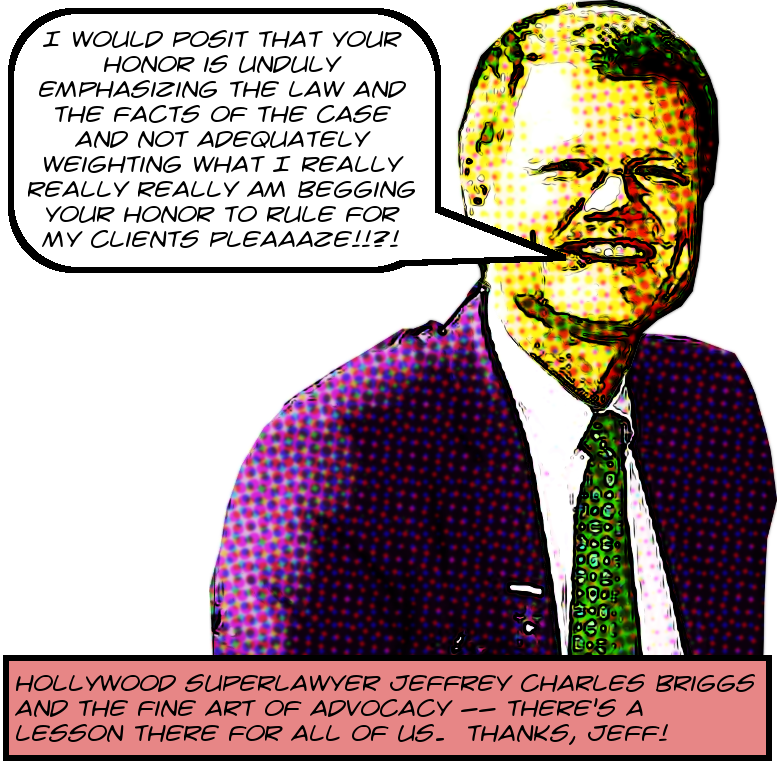 Flynn filed a simply brilliant rejoinder to that, and this very morning the judge rejected every last one of Hollywood Superlawyer Jeffrey Charles Briggs’s arguments, including his incredibly, embarrassingly whiny oral argument, and handed down a ruling awarding $30,000 in fees to Flynn. Ironically, before the ruling, Flynn offered to settle for significantly less than that and was roundly rejected by Attorney Briggs. Turn the page for a transcription of the ruling and a little more commentary.
END_OF_DOCUMENT_TOKEN_TO_BE_REPLACED