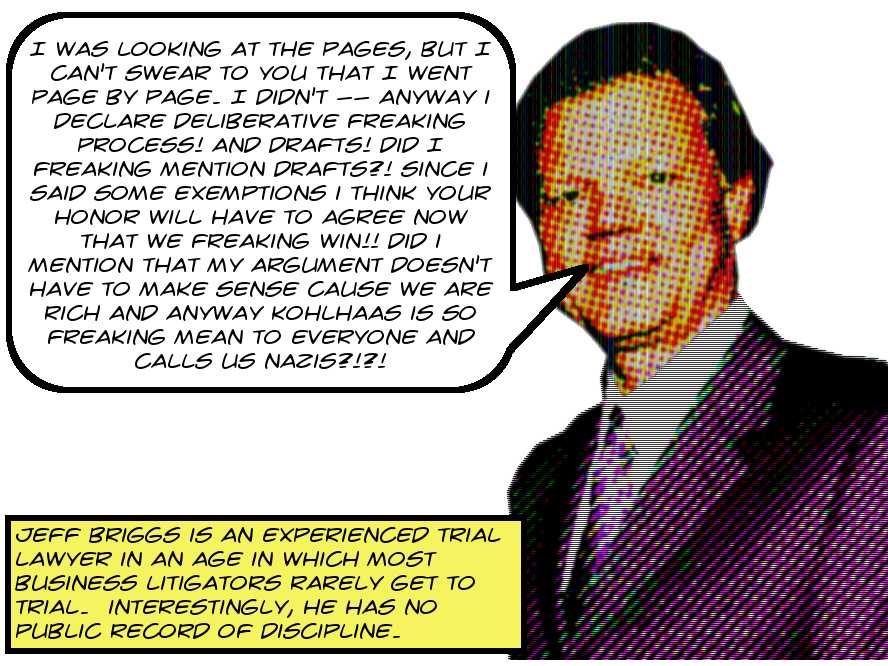 And nowhere does their misbehavior reach a more fevered pitch than in the use of the so-called “deliberative process” exemption to the CPRA. In short, this is an exemption that courts have built up out of the “catch-all” exemption to CPRA, found at §6255(a), which says:

Essentially, a claim of deliberative process is a claim that the agency needs some privacy to discuss decisions that its staff are making.5 You can, I’m sure, see the potential for abuse here. But there’s some solace, theoretical though it may seem, to be found in the fact that the law requires (“shall justify”) the local agency to not only have but also to actually give genuine fact-based reasons for why it’s better for the public to have the record withheld than it is to have it released.

This, as I said, is nice in theory, but in practice it’s ignored by BIDs. However, I’m beginning to think that it’s NOT ignored by courts. Some recent experience has led me to believe that a court will order the respondent, that is to say the recalcitrant, mendacious, record-withholding local agency, to justify most of its exemption claims item by item.6

In response to just such an order, recently imposed by the Hon. Mary Strobel, self-proclaimed Hollywood superlawyer Jeffrey Charles Briggs not so very long ago filed this declaration and privilege log listing a bunch of emails that he and his crooked clients over at the Hollywood Media District BID were claiming were exempt from production.7

And, amazingly, at some point prior to that Jeffrey Charles had produced eight of these emails to me. This unprecedented8 gaffe makes it possible, for the first time9 to actually evaluate the validity of a claimed exemption. And it doesn’t look good, friends. You can read all the material here at Archive.Org, or read on for item-by-item descriptions.

First, here’s what Briggs said about one of these exemption claims:

2/8/16 Goldman/Schechter email attaching draft Exec C’ee mtg agenda DRAFT/DELIBERATIVE PROCESS DISCUSSION OF WHAT TO INCLUDE AND NOT INCLUDE.

Now read the actual email. It’s from Laurie Goldman to Lisa Schechter and Jim Omahen and it says, in its entirety:

Hi Jim,
Please see attached….call me if you have any questions.  I’d like to see the final agenda before it is posted.
Thanks!
Laurie

According to the essential guide to the deliberative process exemption published by the Reporters’ Committee for the Freedom of the Press,10 the key question is always:

whether the disclosure of materials would expose an agency’s decision making process in such a way as to discourage candid discussion within the agency and thereby undermine the agency’s ability to perform its functions.

So really, how does this apply to Laurie Goldman’s email to Jim Omahen telling him that a draft copy of an agenda is attached? There’s no decision-making going on here to be exposed, providing even more evidence that Lisa Schecter and Jeffrey C. Briggs habitually lie about how, why, and if records in their possession are exempt.

Ah, but you may have noticed that there is an attachment to this email. Here it is. It’s a draft agenda, which also has nothing deliberative about it. However, you may well have noticed that deliberative process isn’t the only exemption claim that Briggs made for this item. He also declared that the infamous “drafts exemption,” found at §6254(a), applies. This oft-abused nubbin states that the following are exempt from release:

So take a look at the attachment if you can.11 There’s nothing deliberative going on in there, but there is this fascinating note from Laurie Goldman to Schechter/Omahen:12
(to discuss, but NOT TO INCLUDE ON THE AGENDA)
1. Code of Ethics/Document Retention/Whistle Blower
2. Increase BID Boundaries
3. Assessment Increase

This is super-interesting that Laurie Goldman was planning in advance to discuss matters not included on the agenda. It’s super-duper-interesting in the context of the Brown Act at §54954.2(a)(3), which states unequivocally that:

Anyway, I was planning to go through all of these emails and explain why the claimed exemptions are completely untenable. But on reading through the rest of them it’s become clear that they’re not really that different from one another. I’m interested, but I realize this is probably nerdview, so I think I’m just going to skip it. If you’re interested, though, please take a look at the whole damn collection.

And what does this set of revelations mean for the future? Well, my feeling is that since one judge has shown herself to be willing to force detailed explanations of exemption claims, and since we now have pretty solid evidence that BIDs’ exemption claims, at least those made by Attorney Briggs, are essentially bogus, the BIDs are going to turn away from claiming any exemptions at all13 I’m guessing that once the flow of documents starts up again around here14 we will see very few exemption claims and more claims that exhaustive searches were done when they obviously were not. Or at least that’s what I’m guessing. Tah, friends!

Image of experienced business litigator Jeffrey Charles Briggs is ©2018 MichaelKohlhaas.Org. It was based off of this little item here.