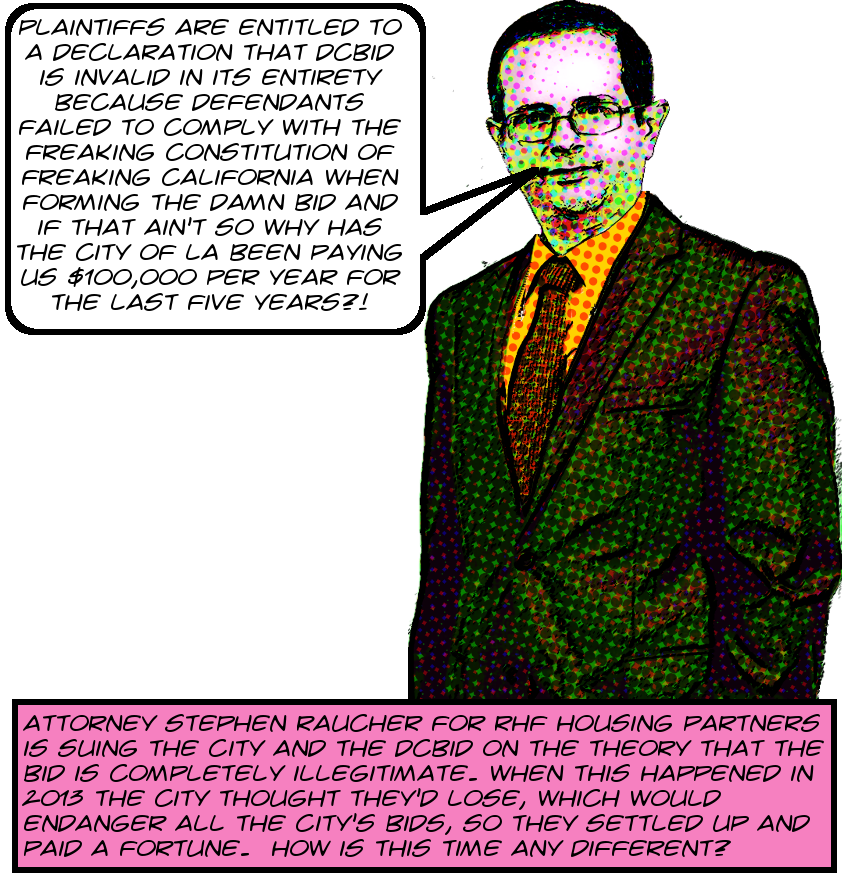 The Retirement Housing Foundation owns and operates a variety of low-income housing facilities around the country, including two, Angelus Plaza and Angelus Plaza North, which are located within the Downtown Center Business Improvement District. In 2012 RHF sued the DCBID and the City of Los Angeles, arguing that because they were a nonprofit provider of low-income housing none or few of the BID’s activities benefited them and that therefore under requirements of the California Constitution they could not be required to pay BID assessments.1

A confidential 2013 report to the City Council by Deputy City Attorney Daniel Whitley, a copy of which I recently obtained, states that the City Attorney’s office considered the City’s case extremely weak.2 However, the report continues:

In accordance with this instruction, the City Attorney negotiated a settlement with RHF in which the City would refund all assessments paid to RHF, to the tune of a little more than $100K per year over the five year life of the BID. Whitley recommended to Council that they approve it. His reasoning was stark:

Given that the City will almost certainly lose this litigation (as we discussed earlier), should the City wish for the DCBID to continue in operation, we recommend approval of the settlement.

This settlement was approved by City Council on February 13, 2013. And the City did pay the money. But then the DCBID expired and was renewed starting in 2018.3 And RHF asked the City to renew the settlement, and the City refused. So RHF filed suit again in 2017. Turn the page for the sordid details.

On May 8, 2017, as the DCBID was in the process of renewing, RHF’s attorney, Stephen Raucher, emailed Daniel Whitley to ask about the status of the settlement agreement after renewal:

As you probably know, the DCBID is coming up for renewal. Our settlement agreement (attached for your reference) remains in effect “for so long as… the DCBID continues in its current formulation.” Nonetheless, in an abundance of caution, I wanted to reach out to you to find out the City’s position on the continued effectiveness of the Settlement Agreement. In the event the City contends that the current settlement expires with the current term of the DCBID, is the City willing to enter into a new, similar agreement?

And after the usual back and forth chatter, Daniel Whitley threw down the glove!

The new BID uses a different methodology, and so we don’t believe it’s using the same formulation as before. If your client wishes to contest the assessments it will have to file suit.

And that’s just what RHF did. Here’s a copy of the summons and complaint, filed in July 2017. And the arguments are technical, but no quarter is given. They’re asking for nothing less than the disestablishment of the DCBID or, barring that, an order that they shouldn’t have to pay the assessments at all because as providers of nonprofit affordable housing they don’t benefit from the BID’s activities. You can read dozens of filings from the case on Archive.Org, with material through September 2018 here and a second set of later material here.

As I said above, RHF lost this case in October, and here’s a copy of the ruling. I’m not competent to judge what happened in between the first suit and the second suit to make the City’s position so much stronger than Daniel Whitley thought it was in 2013, but apparently something did happen. RHF filed a notice of appeal just this last Wednesday, January 23, 2019, and you can read that here, although there’s not much to it.

Whether the appeal will succeed or not I have no way of knowing. The case hinges on incredibly technical aspects of California tax law. But the whole situation is pretty revealing. In 2013 the City recognized that in all probability a court would rule that the Downtown Center BID, along with possibly all BIDs in the City of Los Angeles, was illegitimate. In order to avoid this outcome, catastrophic from the City’s point of view, they elected to spend more than $500K paying off the plaintiffs to avoid losing the case. But this means that it’s likely that, at least in 2013, the City’s BIDs were in fact illegitimate. Why would the City of Los Angeles spend so much money to prop them up rather than fixing them?

Everyone involved with BIDs goes on interminably about how they’re spending their own money that they’re paying voluntarily. Even forgetting about the vast amount of City-owned property in BIDs, for which the City pays staggering amounts of assessment money to the private corporations that run the BIDs, even forgetting about the vast amount of City resources which go into placating the weirdo demands of the BIDdies, here’s the City spending a half million dollars just to avoid facing up to the likely possibility that every BID in the City was illegal. And they may still turn out to be so. Stay tuned for updates.

This case addresses the Plaintiffs’ claims against the Downtown City Business Improvement District (DCBID). We previously provided two reports (R12-0328 and R12-0361) regarding this litigation and submit this report to provide a recommendation for settlement, which we believe will resolve this matter.

This settlement will last for five years. Over the course of the five-year settlement the DCBID will provide approximately $30 million services while the City will pay approximately $500,000.00 to the Plaintiffs under the terms of the settlement.

Given that the City will almost certainly lose this litigation (as we discussed earlier), should the City wish for the DCBID to continue in operation, we recommend approval of the settlement.

We believe this will resolve this matter and that this settlement is in the best interests of the City. It is, therefore, recommended that Council:

1. Approve settlement of this case on the terms set forth in this report, and authorize the City Attorney to execute the necessary settlement and release documents to effectuate the settlement; and

2. Authorize and instruct the City Clerk, subject to approval of the City Attorney, upon receipt of documentary proof that Hill RHF Housing Partners has paid each of the assessments from the DCBID during the five-year life of the DCBID, to cause to be drawn and delivered demands for each such payment required to be made by the settlement in this matter, from funds available in City Attorney Fund 100-Department 12, Liability Claims Account No. 9770, to Hill RHF Housing Partners, without further action by the Council or Mayor; and

3. Authorize and instruct the City Controller to process the payments to the payee as specified by the City Clerk, subject to the approval of the City Attorney, that are authorized and required to be made pursuant to this settlement, from funds available in City Attorney Fund 100-Department 12, Liability Claims Account No. 9770, to Hill RHF Housing Partners, without further action by the Council or Mayor.

If you have any questions regarding this matter, please contact Deputy City
Attorney Daniel M. Whitley at (213) 978-7786. He or another member of this Office will be present when you consider this matter to answer any questions you may have.

Image of Stephen Raucher is ©2019 MichaelKohlhaas.Org and is, well, you know.. just take a look at this, why don’t you?