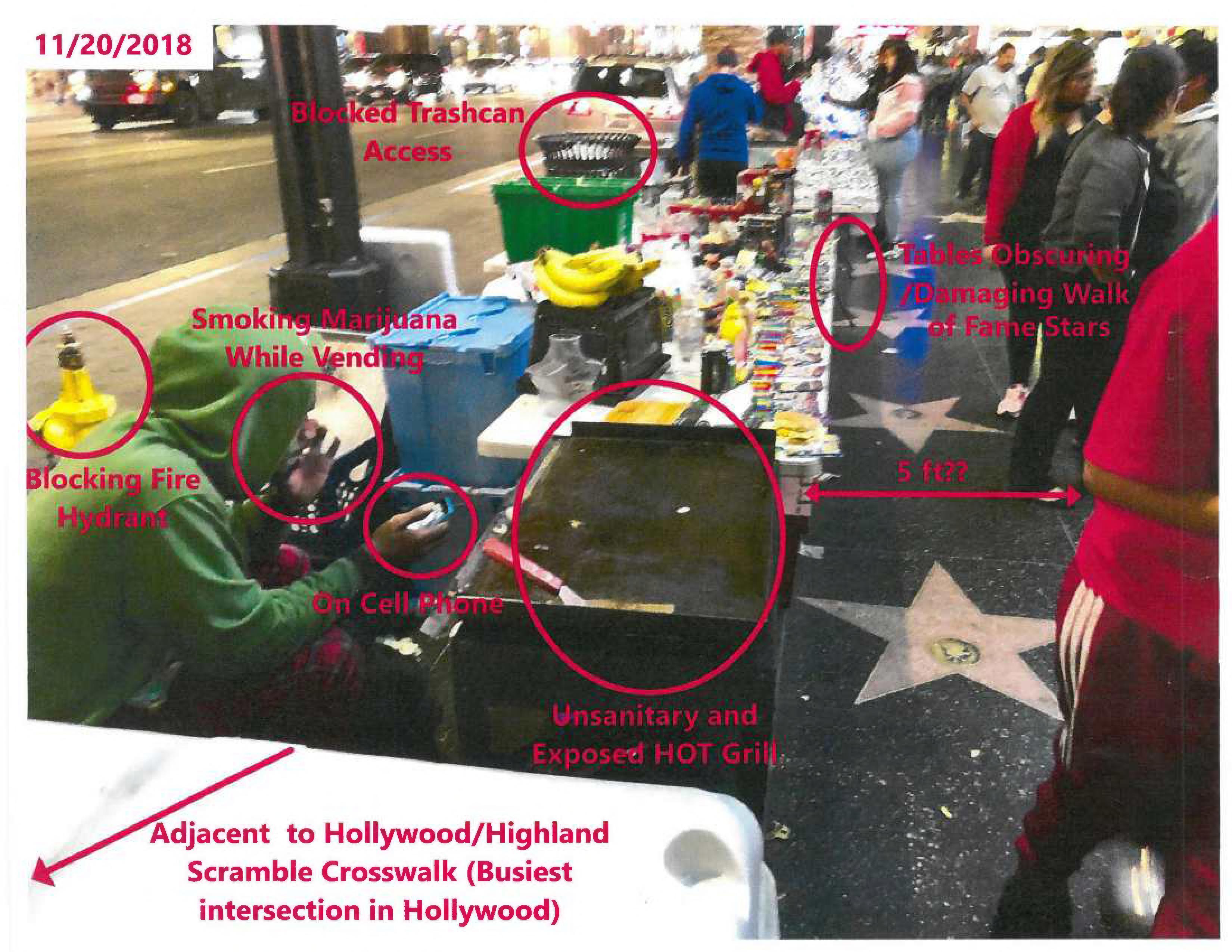 And to do this, of course, they’re now required to argue that they’re motivated solely by objective health, welfare, and safety concerns rather than the real reasons, chief among which is their unhinged racism. Which brings us to November 27, 2018, when Leron Gubler submitted yet another letter to the Council File, accompanied by some photos supplied by the Hollywood Property Owners’ Alliance, pushing the theory that vending on Hollywood Boulevard is unhealthy, unsafe, and contributes to illfare,4 and so should be banned.

And what are these putatively objective health, safety, and welfare concerns? Well, just look at the picture above. What do you see but a hotdoguero sitting next to his grill and smoking something, claimed to be marijuana, while looking at his phone. They never explain why this is bad, so maybe it’s just obvious? Is texting while grilling a well-known safety concern?

And as for cooking while stoned, well, if you’ve spent any time at all around the back of the house in pretty much every restaurant in the world you’ll know that (a) chefs smoke a lot of weed and (b) it certainly doesn’t hurt their cooking and (c) probably really improves it cause they get so darn enthusiastic about those flavors. This is well understood in the industry, and, with legalization, is even the basis for a whole new kind of cannabis-based haute cuisine. Perhaps it’s not surprising that I’ve never heard a word out of any of these BIDdies about the dangers of stoned food preparation in traditional restaurants.

Nor have I ever heard a word about the very real health, safety, and welfare concerns in the traditional high-end restaurant industry whose presence on Hollywood Boulevard is so enthusiastically touted by the BIDdies. Famously, according to Winston Churchill, the traditions of the British Navy are rum, sodomy, and the lash. In fine dining restaurants the parallel traditions are cocaine, rape, and sadistic brutality. Whatever damage is likely to be done to the social fabric by a stoned person cooking hot dogs on the street, he’s probably not going to commit rape on the job. 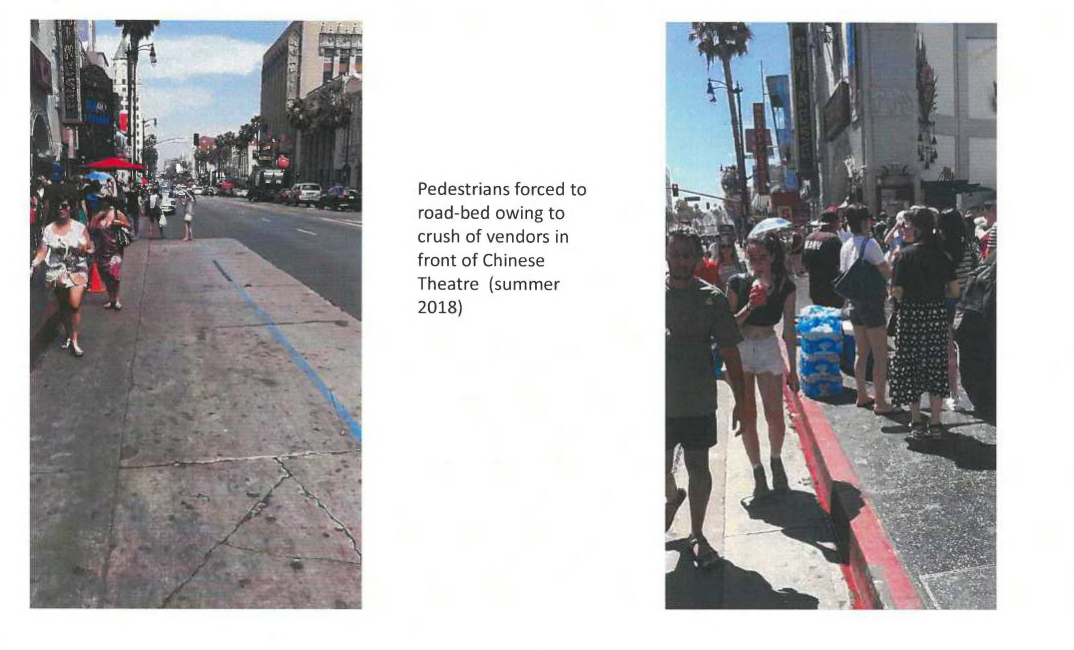 And really, if you read the letter (there’s a transcription below), the weed-smoking hotdoguero seems to constitute the full extent of BIDdie health concerns. There’s a nod towards safety concerns, illustrated by photos of people putatively forced to walk in the street in front of the Chinese Theater by vendors, but take a look at the pictures. In one case the sidewalk isn’t visible and in the other case there aren’t any vendors on the sidewalk. The fact is that people have been walking in the street in front of the Chinese Theater since forever. It may well be dangerous, but it’s not because of vendors.

The bulk of Leron Gubler’s letter, though, reflects the real concern of these BIDdies, that is the real concern other than racism which, as dense and insular as they are, even they seem to have learned to keep quiet about. This, of course, is the fact that vendors obscure the stars on the sidewalk. Thus ranted Leron Gubler:

See, according to the BIDdies, it’s not just a sidewalk. It may be “similar” to a sidewalk, but actually it’s a “unique entity” and a “central point of activity.”5 But actually, in reality, whether or not it is all these things, it’s still a sidewalk. It’s owned by the people of Los Angeles, not by the BIDdies. This is why, e.g., the City Council has to pass an ordinance for each and every star that’s installed there. The BIDdies are not the boss of this sidewalk. They use those stars to make money by drawing tourists into their businesses. Street vendors have an equal right to use them the same way.

The BIDdies don’t own the walk of fame, and they don’t get to exclude people who also want to use its drawing power to earn a living. And fortunately, thanks to Ricardo Lara, state law prohibits them from excluding vendors for this reason. And it is their real reason.6 Thus I predict lawsuits over this Hollywood Boulevard vending exclusion zone. And, as is often the case, the BIDdies are providing some of the most damning evidence against themselves. And that’s the story. Now I’m off to the corner to buy some tamales y champurrado for breakfast!

On behalf of the Hollywood Chamber of Commerce and the more than 800 members it represents, we would like to thank the Council for ensuring that the protections for the Hollywood Walk of Fame have been included in both drafts of the proposed vending ordinance.

In order to best ensure the safety of the thousands of people that access the Walk of Fame daily, it is imperative that these protections remain in place and that robust enforcement is provided to ensure that the established vending rules are adhered to. As such the Chamber is supporting the adoption and funding of a comprehensive permitting program as outlined in Draft Ordinance No. 1. The Chamber believes that this model will allow the City to best recover its costs and provide the necessary enforcement to ensure a successful City Wide vending program.

In accordance with the protections afforded the Walk of Fame for both ordinances, we ask that you please consider how the City intends to enforce vending regulations on Hollywood Boulevard. I have attached a photo taken last week of the very typical conditions on Hollywood Blvd. In just this one photo you see:

• A vendor blocking access to a fire hydrant and a city trash can.

• This vendor is also publicly smoking Marijuana, while talking on his cell phone and manning a hot grill that is directly exposed to the passing crowds.

• All of this is occurring just feet from Hollywood’s busiest pedestrian crosswalk at Hollywood and Highland.

The Hollywood Chamber of Commerce implores you to please consider how the City intends to provide adequate enforcement as it proceeds with the adoption of this ordinance. Specifically, we ask that you please address the following:

1) The draft Bureau of Street Services Rules and Regulations mentions vending carts or kiosks. However, in our experiences with the current vending atmosphere, many transactions are done from- tables, blankets, tubs, bins, and wheel barrows. Is it the City’s intention that these items also be included in the definition of cart/kiosk?

2) The draft rules and regulations also specify a two foot clearance between vending carts and kiosks. Many of the vendors currently active, utilize additional items like tubs, bins, and ice chests to store additional products. Often these ice chests and tubs are placed beside the vending carts. Can the two foot clearance be measured to account for the placement of these items – rather than from cart to cart?

3) Will picture identification be a mandated part of the permit system for vendors?

4) If the Council opts for a vending program model that does not require all vendors to be permitted, how will the City address the increased costs that will undoubtedly be absorbed by the cleaning crews of Business Improvement Districts, in the event that some vendors are not adhering to the rules and regulations requiring pick up and disposal of trash? (Almost all of Hollywood Boulevard being part of a Business Improvement District)

Once again, thank you and we look forward to working with you to ensure the implementation of a successful vending program that is beneficial for all Angelenos.