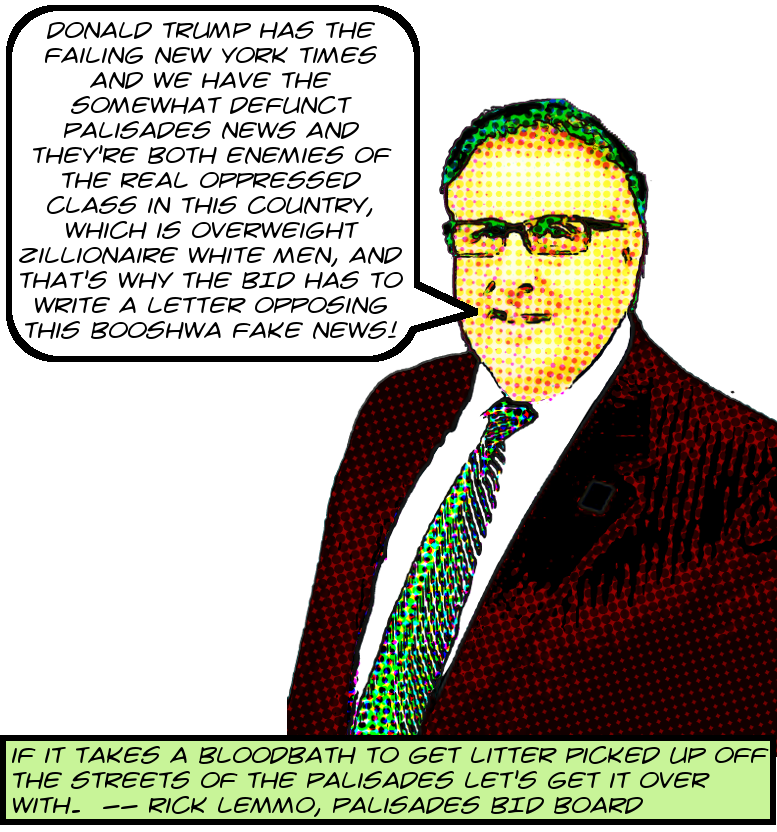 Yesterday morning the Pacific Palisades BID became the third lucky winner in our ongoing Brown Act enforcement project, following in the hallowed footsteps of the Byzantine Latino Quarter BID and the Studio City BID after them. I sent the BIDdies this demand letter, based as usual on the Brown Act at §54960.2, which gives civic outlaws like the Palisades BIDdies the chance to avoid getting sued back to the Stone Age by issuing an unconditional commitment never to break the same law again no more.

The Byzantinios caved and issued such a letter, and the Studio Citizens did too, at least with respect to three out of the four violations of which I accused them.1 And there’s a reasonable chance that the Palisadesean BIDdies will cave as well, in the fierce face of my ferociously convincing rhetoric. But maybe they won’t, cause BID boss Elliot Zorensky is a stone cold psychopath whose anger, it seems, has so far overmastered his prudence that he will cheerfully drown his own metaphorical babies merely in the hope of splashing some metaphorical bathwater on the metaphorical silken neckties of his quite literal enemies. Hard core, yes. Sustainable? Certainly not.

And of course, to faithful readers of this blog the fact that the Palisadeseans have violated the Brown Act won’t even seem like news. They are locally famous for scoffing in the face of the Brown Act. There was that time in January 2016 when they went and held a vote by email, and that other time in April 2016 when they went and held a vote over the telephone, and that other other time in April 2016 when Sue Pascoe of the Palisades News had the damn nerve to tell Laurie Sale that the Brown Act required them to post their damn agendas where people could see them and Laurie Sale flipped out and cried on Rick Scott’s shoulder all night long.

But the problem with all those episodes in relation to the enforcement project is that good old §54960.2 requires one to start the legal process with a demand letter sent within nine months of the violation. I made my first CPRA request of the PPBID in January 2017 but because they’re a bunch of law-flouting privilege monkeys, they didn’t hand over many if any records until July 2018,2 so that the Brown Act enforcement deadlines for all those 2016 violations were past before I even learned of them.

However, in that steaming heap of records that Elliot Zorensky handed over to me in July3 there was a crucial exchange of emails between Board members that adds up to a big fat violation of the Brown Act at §54952.2(b)(1), which says:

And not only that, but the conversation took place in May 2018, so we are well within the nine month deadline. And it’s that conversation, the details of which are interesting in themselves and are to be found after the break, that forms the basis of today’s demand letter. The BID now has thirty days to respond or else we’re going to court, and you will read all about it here if you want to!

Here’s what happened. On May 23, 2018 PPBID Board member Rick Lemmo emailed fellow board members Elliot Zorensky and Nicole Howard and some other people about an article that had appeared in the Palisades News. He said:

Please find attached another “fake news” account by the somewhat defunct Palisades News. I would appreciate it if the BID would in fact correct the record in our upcoming minutes and two [sic] write a correction to Bill Burns [sic] and the news to moire [sic] accurately relate the facts and correct their story.

Note the particularly Trumpian tone, what with accusations of fake news and the use of almost random discrediting epithets, “failing New York Times,” “somewhat defunct Palisades News.” Also, if you want to read the article he’s upset about you can find it here. But it’s the kind of hyperlocal stuff that outsiders just aren’t ever going to understand. He sure is mad about it, though! But Board president Elliot Zorensky is even madder! He’s so mad his weirdly large head is fit to explode! Just look:

Guys I really cannot believe that Sue Pascoe did an article that makes the Chamber look bad for the all of the good deeds you have done for years. I do not understand why she would do that.
…
We, the BID will write an [sic] rebuttal to the article and send to the paper (Bill Bruns). I would also send to the Palisades Post if they will print it too. The BID would love help with this letter from the Chamber to make sure it is correct and comprehensive. The BID minuets [sic] will reflect the facts correctly. It will NEVER make the Chamber look bad and hope the relationship can go back to what it was.

I am still in Vegas spending time with my sons following the ICSC convention and will be back to the Palisades on Saturday evening. I will ask for the correction article to be started right away. Laurie and Susan Carrol [sic] will take a run at the first draft. Guys again I am so sorry for how the Chamber was made to look bad.

And if that had been the end of it then actually there would have been no violation, because at this point only a minority of the Board members were involved in the conversation. But Elliot Zorensky, a man who would rather save $2,000 on lawyers now only to have to spend $200,000 tomorrow,4 just couldn’t leave it alone. The very next day he forwarded Rick Lemmo’s letter to the entire Board and added this genius bit of commentary:

Everyone we have a problem. We must write a letter to correct the facts to Sue Pascoe.

And it’s at this point that the Board of Directors violated the Brown Act at §54952.2(b)(1). Here they are, as plain as day, discussing a matter that’s within their subject matter jurisdiction. And they’re discussing it by email. Oh, you might legitimately wonder if this is really a discussion among a majority of the Board members. After all, first a minority discussed it and then Elliot Zorensky shared some of the content of that discussion with the rest of them. But this certainly still counts as a discussion.

This question was the subject of an opinion by the California Attorney General in 2001, which is 84 Cal. Op. Att’y Gen. 30(2001).5 In this opinion the Attorney General says that the actions prohibited by this section:

… would include any exchange of facts … or … substantive discussions “which advance or clarify a member’s understanding of an issue, or facilitate an agreement or compromise amongst members, or advance the ultimate resolution of an issue”

And this kind of sneaking around in secret emails is really harmful. BIDs are subject to the Brown Act because they’re created by the City of Los Angeles and funded with tax money.7 The only way that we, the people, have to control the actions of these weirdo little backwater public servants is by monitoring their decision-making processes via the Brown Act and the Public Records Act. When they meet in secret like this is puts them beyond political control, which is intolerable in a free society. As the Brown Act itself at §54950 says:

Anyway, enough ranting! That’s the violation, and yesterday I sent them the demand letter. The statute gives them thirty days to issue an unconditional commitment to never violate this section of the law again. If they don’t respond or if they respond too late, it’s off to court to enforce the rights of the people of Los Angeles!

Image of Rick Lemmo is ©2018 MichaelKohlhaas.Org. I guess there’s a family resemblance with this lil Lemmo here.