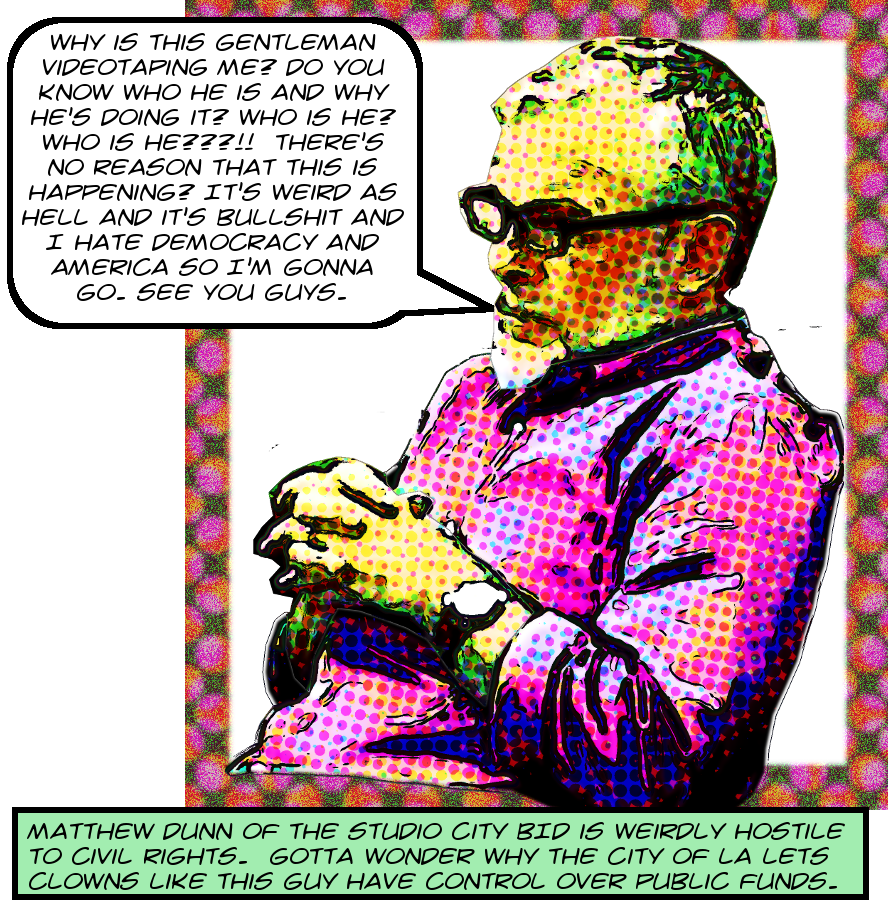 Oh for goodness sake, friends! Day before yesterday I took an astonishingly complex combination of public transit routes out to the the wild and untamed-by-rule-of-law hinterlands of Studio City to attend my very first meeting of the board of directors of the Studio City BID. And Lord, what a scene! What a raving conglomeration of angry white men! I have a serious topic to write about with respect to this meeting, but there are some things I have to take care of first, so it’ll have to wait. Thus, tonight, you get a lighthearted highlights slash bloopers reel of some of the oh so crazy antics of these oh so crazy folks.

When I first arrived in the meeting room1 there were board packets at every seat at the table. Board packets everywhere! Additionally, incompetently pedantic flunky Damien Gatto was shuffling self-importantly about the place so I asked him to see a copy of the packet. Now, I don’t tend to ask BIDdies for any favors, because what’s the point? And this request for a board packet to look at was not asking for a favor. The Brown Act at §54957.5 requires any materials distributed to the board for a meeting to be made available to the audience immediately.2

Evidently pedantically incompetent flunky Damian Gatto never heard about this, though, because, says he, he’s only going to give me the minutes and the agenda, and not the financials cause, says he, they’re secret. So I said “why” and he said, in a performative demonstration of his pedantry, his incompetence, “because we don’t have to, that’s why.” Hmmm. Gotta love the intense commitment to public service evinced by this pocky little sucker on the public tit, eh?

Anyway, he then stumbled off to his lair where, I am guessing, he was set straight by Emmy-award-winning zeck dreck John Walker,3 because when he came back with the goodies they did, lo and behold and so on, include the top secret financials. You can read that toppest secretest board packet, complete with the ultra-toppest ultra-secretest financials that spotty little minion Damian Gatto did not want you to see by clicking right here!

Now, that’s all interesting, I’m sure, but by now it’s not news that these rampaging BIDdies don’t have the first clue how the Brown Act works.4 This little incident, though, was far, far from being the weirdest, lunatic-est, most-signifying-of-a-delusional-level-of-cluelessness-est, incident at this meeting. Those honoraria go to the bizarre little hissy pitched by board member Matthew Dunn who, it seems, doesn’t like to have his picture taken5 even though the right to record meetings is explicitly guaranteed by the Brown Act.6 Turn the page for details, links, and, of course, a transcription!

In this aversion, by the way, Matthew Dunn is not so different from other unhinged antisocial BIDdies, like e.g. psychopathic rageball George Yu of the Chinatown BID7 or that unidentified but nevertheless diagnosable board member from the Arts District BID, who all, it seems, have deeply guilty consciences that make them hate being recorded. Super-genius angry clown Matthew Dunn tops all of these screaming mimis, though, in that, in his ungoverned rage at being filmed against his wishes he actually stormed out of his own meeting.

You can watch the lead-up to his tantrum right here or jump ahead right to the outstorming. This is a unique reaction in my experience, and somewhat self-defeating on Mister Matthew Dunn’s part. The City gives these BIDdies almost unlimited power to collect and spend money. Pretty much the only condition is that they have to make themselves subject to the Brown Act and the Public Records Act. They must find this to be a worthwhile tradeoff because it’s entirely voluntary on their part. And then the second someone wants to exercise rights guaranteed by the Brown Act and therefore agreed to voluntarily by the BID this guy walks out so that he doesn’t get to help spend the money?

Oh, and I almost forgot to mention! Check this other guy, whose name I didn’t get, who didn’t leave but he did sit there with a piece of paper in front of his face for most of the meeting. See him here in the lower left corner of the screen. Or jump straight to here where he forgets himself for an instant and puts the paper down. The kind of thing one learns at perp walks, I imagine. Anyway, I’ll close with a transcription, and keep your eyes or your RSS feed open for some big upcoming news about this creepy little Ventura Blvd BID!

Matthew Dunn: I gotta know something. Why is this gentleman videotaping me? Why?

John Walker: Because he chooses to.

Tony Richman: Because he can.

JW: he’s an activist in the community, in the city of Los Angeles, he’s attending…

MD: And I think you should tell us that before somebody comes in here and does that.

JW: I didn’t have a chance to tell you the president knew.

MD: okay okay and but there’s no reason that this is happening?

JW: And you’re on tape indicating that.

Image of Matthew Dunn is ©2018 MichaelKohlhaas.Org. Not only did we flip the dude out by filming him without asking but now we are copyrighting pictures of him. Just wait till we start selling the damn coffee mugs!