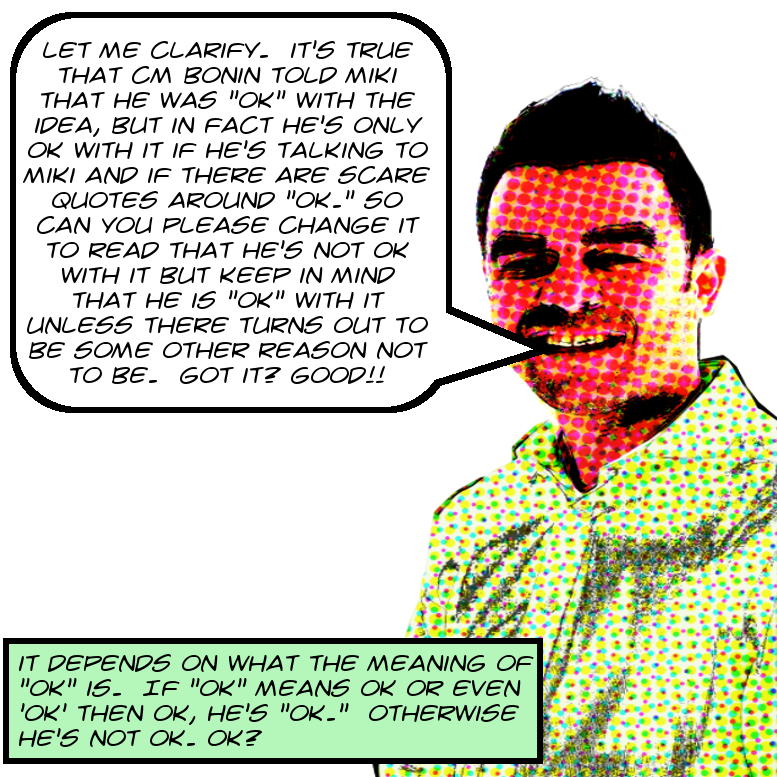 Oh, man! Don’t you hate it when you tell your followers and minions and networkers that your Councilmember supports some policy position and then his chief of staff flips out on you and “requests” that you eat your words and you have to do it cause if you don’t the Council District might cut off the flow of zillion dollar bills pouring down on you and the damn zillionaires as whose henchman you serve from the heady cornucopian heights of the fourth floor of 200 N. Spring Street?1

What?! That never happens to you?! Well, it certainly happens to BIDdological freak show specimen Donald Duckworth like, all the freaking time. This is the story of one such episode from 2017 having to do with street vending, which began on January 11 when 2017 Donald Duckworth sent out the Westchester Town Center BID‘s Winter 2016 newsletter.

It contained a typically stupid but essentially innocuous article on the infamous CF 13-1493, which is, of course, the street vending matter. I don’t have the original email attached to which he sent the thing, but he also forwarded a copy to Rita Moreno of the City Clerk’s office. And therein we find the following exhortatory paragraph, which evidently accompanied the newsletters sent out to the BIDs willing minions:

We are sending the newsletter now so that our readers have an opportunity to voice their preferences with respect to the proposed City action that is being supported by Councilman Mike Bonin. Think of taco carts, fruit vendors, and cheap merchandise together with all of the litter, sidewalk mess, and clutter caused by vendors that don’t pay rent, taxes, or fees as the brick and mortar stores they are competing against do. The Westchester Town Center BID has requested our Councilman to not force street vending on the community of Westchester and to require property owner approval before any vendor could set up shop in front of their property. If some neighborhoods want it fine, but we don’t think Westchester is one of those places. The Neighborhood Council and Chamber of Commerce have agreed. How fair is it to require property owners to repair their sidewalks but not allow them to have a voice in whether or not someone can set up a business there?

Well, it seems that Councilmember Mike didn’t like this claim that he was in favor of the street vending apocalypse2 and he called Donald Duckworth on the morning of January 12, 2017 and was all like hey dude, not right and therefore apologize. And Donald Duckworth, whose job is to bring home the bacon rather than to aggravate the pigs, begged forgiveness and agreed to correct the damn record. And the whole detailed story along with links to and transcriptions of the emails and other records can be found directly after the damn break!

The first indication of trouble is found in this January 12, 2017 email from Don Duckworth to BIDdie Miki Payne. Unfortunately I don’t have the original, but only a version that Don Duckworth forwarded to Bonin lackey Chad Molnar:

Yesterday we distributed the current issue of the Westchester Town Center BID Newsletter, which is attached again.

We wanted our readers to know about the a proposal that the Los Angeles City Council was considering that would legalize and possibly force street vending onto Westchester. Our beloved Councilman Bonin talked to us this morning and felt that our email mis-characterized his position. We did not intend to do so, apologized for any misunderstanding, and agreed to clarify his position with our readers. Councilman Bonin said that he supported an “opt-in” system or, if the votes to pass it were not there, then: “I will continue to push for requirements to give neighborhoods an easy and simple ‘opt-out.'” He also said he agrees that property owner approval should be required before street vending could occur on any particular property.

At issue here is Don Duckworth’s earlier statement that Mike Bonin supported taco stands. The BIDs, of course, had been and still are pushing for any Los Angeles street vending scheme to require neighborhoods to opt-in. Street vendors seem to have enough political clout to prevent the City Council from passing this, so the next best thing for the zillionaires is the so-called “opt-out” option. By February 2017 Mike Bonin was telling BIDdies in CD11 that not only did he support this, but that he supported allowing each Councilmember to unilaterally opt various neighborhoods out at will.

Anyway, as I said above, Don Duckworth sent this proposed clarification to Mike Bonin’s head staffie Chad Molnar along with this offer:

We thought we’d run this revised email clarification language by you before actually sending it tonight. Let me know your thoughts. Thanks.

Chad Molnar got back to him less than an hour later with this:

Thanks for the chance to review.. can you give me a few to try to track down some additional info? Will get back to you with a couple small changes soon.

And a mere 26 minutes later Chad Molnar replied again, this time with the detailed changes that would be necessary to mollify his boss, Mike Bonin:

Can you just strike the following line altogether?

“He also said he agrees that property owner approval should be required before street vending could occur on any particular property. ”

I know I told Miki that he is “Ok” with the idea, but there are a number of other things we’re looking at to protect your businesses and accomplish what we think you want, so he just isn’t ready to make that an explicit requirement yet.

Otherwise, the rest of the email works.

This, of course, is the dreaded property owner approval. The BID, indeed, all the BIDs, are hungering for this clause because they know how to abuse it in order to ban street vendors from their BIDs all together. Note the inherent hypocrisy in the fact that Mike Bonin’s staff chiefie actually told BIDdie Miki Payne explicitly that Mike Bonin supports property owner approval. But it seems that he’s not willing to commit to it publicly.

Everyone who’s paying attention3 knows that not only is property owner approval a dealbreaker for the street vending proponents, but it’s probably unconstitutional. No politician is going to go to the wall for this delusional crapola, which is why Chad Molnar wants it out. And of course Don Duckworth can’t afford to alienate Mike Bonin, so it took him only six minutes to send this reply agreeing to all terms:

But two minutes later Don Duckworth’s sense of entitlement reasserted itself and he fired off an intemperate demand that Chad Molnar make good on his vague promise to “protect your businesses and accomplish what we think you want”:

We sure would like some input / review of any language that is intended to protect us.

And Chad Molnar, who knows when to hold em and knows when to fold em, certainly knows when he’s already won and should be gracious. Thus did he reply a mere three minutes later to El Duckworth:

And El Duckworth did indeed take out the offending lines, as seen in this version from the next day, January 13, 2017, for which he was thanked personally by Bonin flunky Anna Kozma: “Thanks for the edit, Don. We appreciate it.” And man, this has to rankle with El Duckie. He’s given it all up to dear leader Mike Bonin with nothing to show his BIDdie bossies but Chad Molnar’s empty promises which, along with eight dollars and fifty cents, will buy you an iced double grande chai tea latte with two blonde shots at that coffee place they all like so damn much.

Yesterday we agreed that we should ask Chad to review the language of our clarification email. Chad asked that the following sentence be removed: “He also said he agrees that property owner approval should be required before street vending could occur on any particular property.”

Chad said: “I know I told Miki that this language was acceptable to Mike, but we are trying to find something better.”

Given our goal, I said “ok.” Then added: “We sure would like some input / review of any language that is intended to protect us.”

I wish I wasn’t so suspicious… What could help us more than a simple property owner approval requirement?

Image of Chad Molnar is ©2018 MichaelKohlhaas.Org and has some lil something to do with that Chad Molnar over thar.