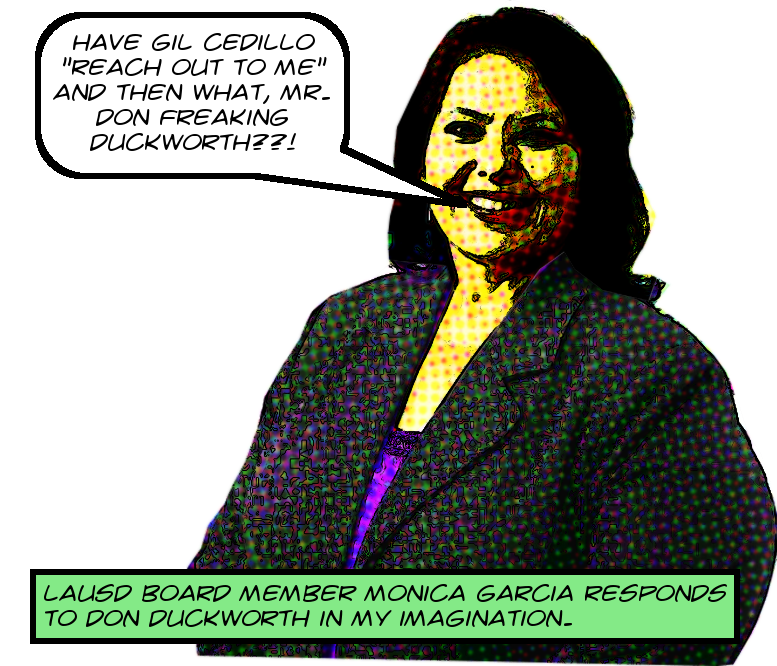 It’s well-known that the City of Los Angeles always votes its property in favor of BID formation. In fact, an ordinance passed in 1996 directs the Clerk to vote yes on both petitions and ballots unless the City Council specifically directs otherwise. And to my knowledge, the same has been true of the Los Angeles Unified School District. There have been signs, albeit not dispositive, of some LAUSD discontent with the policy, e.g. the probably intentional voiding of all petitions, but no open rebellion that I’m aware of.

And BIDs are evidently used to taking LAUSD petitions and ballots for granted. For instance, the Byzantine Latino Quarter BID is currently in the process of renewing.1 And I just received a huge release of emails about the renewal from BLQBID director Moises Gomez, which you can look at here on Archive.Org. It’s clear from the discussion that Don Duckworth and Moises Gomez were counting the LAUSD petitions as already-hatched chickens2 but, amazingly, it was not to be.

In April 2018 LAUSD staff prepared a report recommending that the Board sign petitions approving seven BIDs in Los Angeles. But at its May 8, 2018 meeting, the LAUSD Board voted down the staff proposal, and, according to staffer Yekaterina Boyajian, writing in an email to Moises Gomez on May 21, this is how it went down:

The proposal for the District to sign these petitions in support of the BIDs was not approved. The Board expressed the desire to support the BID petitions, and staff spoke to the positive relationships schools have with existing BIDs, but the Board felt that they could not justify supporting the expenditure of public education funds for purposes other than education in a time when the District is facing historic budget deficits.

And turn the page for a detailed explanation of the BLQ BID’s evolving thinking about these LAUSD petitions between February and May 2018, along with the usual links to and transcriptions of any number of really interesting emails!

⌘ February 15, 2018 — Don Duckworth to Moises Gomez: Has Monica Garcia given you a time frame on the return of the LAUSD Petitions? At LAUSD, the squeaky wheel will get the grease. — Don Duckworth does a lot of BID renewal consulting, hence his expert tone with respect to how to deal with LAUSD.

⌘ February 15, 2018 — Moises Gomez to Don Duckworth: Lizette Patron, Chief of Staff at Monica Garcia’s office called and left me a message on how the petitions have been forwarded to Steve Cotton to facilitate getting the petitions signed from the facilities department. I’m going to try and see if I can get these signed by Monday. — That would be Monday, February 19, 2018. Keep that in mind as you continue to read.

⌘ April 2, 2018 — Don Duckworth to Moises Gomez: Someone from LANI should call Monica Garcia’s Chief of Staff and make sure that the BLQ-Pico renewal petitions are scheduled for approval by the LAUSD Board. I’m thinking there is an item on April 10 Board Meeting for this. But we should check and be sure. — Moises Gomez was expecting these petitions to be signed by February 19. Now it’s six weeks later and they are still unsigned. Worse yet, now there’s an item scheduled at a Board meeting, whereas in February no one had mentioned the need for Board approval. Note that LANI is the Los Angeles Neighborhood Initiative. This is some kind of non-profit which also serves as the Property Owners’ Association for the BLQ BID.

⌘ April 6, 2018 — Moises Gomez to Don Duckworth: So I just spoke with Yekaterina. The petition is slated to be discussed at a LAUSD board meeting on April 24th which cutting it really close. I will make arraignments [sic] to be present at the meeting. — Now LAUSD staffer Yekaterina Boyajian has told Moises Gomez that it definitely will be on a Board agenda, so that approval is no longer automatic.3

⌘ April 9, 2018 — Don Duckworth to Moises Gomez: If LAUSD says they have the Petition on the Board Agenda with a recommendation for approval, I don’t think you need to attend the meeting. I do not in similar circumstances. Usually these are Consent Calendar items. If the Board Member is supportive you should be good. Just my 2 cents… — Don Duckworth is evidently still not worried. He claims it will be on the consent calendar and there is no need to go to the meeting to speak in support. He, as we have seen, is the consummate BID approval expert, especially when it comes to LAUSD. Will it spoil the plot if I say that he’s wrong? Dead wrong.

⌘ Also in that same email: Moises, please telephone Monica Garcia’s Office at LAUSD and verify (“for reals”) that approval of the BLQ-Pico BID Renewal Petitions is on the Board Agenda for a specific date. (What specific date?) I’m guessing it’s on the May 8 Agenda. But we need real information. May 8 is 4 days past the City’s May 4 “drop dead” date but we can, I think make a case that LAUSD promised this approval mid-April then hasn’t followed through. We need to be able to represent to the City that LAUSD will provide our executed Petitions without “conditions” on the 9th of May it would seem to me. — Does Don Duckworth seem to be getting a little nervous now? In February he didn’t even acknowledge the necessity of Board Approval. In April he said it would be a routine consent item and no one needed to attend the Board meeting to support it. Now he’s worrying about the fact that the approval will come in after the City’s deadline for petitions. However, he’s still assuming the petitions will be approved and so he’s outlining a strategy to get the City to accept them late. His tune really is changing, is it not?

⌘ April 25, 2018 — Moises Gomez to Don Duckworth: Yekaterina at LAUSD called to inform me that yesterday’s board meeting in which they would have discussed authorizing the petitions was cancelled last minute. The rezcheduled [sic] date is now May 8th. The day after the deadline. — They are really getting nervous about LAUSD now. But they’re still taking it for granted that LAUSD will sign the petitions. As above, their worries are all about timing rather than about defection.4

⌘ April 25, 2018 — Don Duckworth to Moises Gomez: Yes. She’s the person I’ve been talking to per my email the other night. I’ve informed the City of the LAUSD delay. That means we have until May 8 instead of the May 4 we were originally told by City. The question will be: how long it takes for LAUSD to get the signed Petition to us and our need that it be “unconditional.” I have a call into her re those questions. — Don Duckworth is really on this problem. He’s in touch with the City, he’s confirmed a deadline extension, he’s thinking about practical problems related to getting the approved petitions in-hand and tranferring them to the City.

⌘ April 25, 2018 — Don Duckworth to Moises Gomez: It sounds like we’ll get unconditional Petitions on May 9. She will email them to me. Sounds good. — It sounds to me like Yekaterina Boyajian is representing to Don Duckworth that the Board will definitely approve of signing the petitions. I know this is a temptation for staffers, to assume that their boards will do as they’ve always done in the past. But if that were the last word on the subject, why do we even have boards at all?

⌘ May 15, 2018 — Yekaterina Boyajian to Moises Gomes: On May 8th, 2018, the Los Angeles Unified School District Board of Education voted on a staff proposal to sign various Business Improvement District (BID) petitions involving District properties. The proposal for the District to sign these petitions in support of the BIDs was not approved. The Board expressed the desire to support the BID petitions, and staff spoke to the positive relationships schools have with existing BIDs, but the Board felt that they could not justify supporting the expenditure of public education funds for purposes other than education in a time when the District is facing historic budget deficits. — As already seen above.5

⌘ May 21, 2018 — Moises Gomez to undetermined recipients:6 Although the BLQ BID recertification petition drive was successful without LAUSD support. I am a bit concerned about the upcoming special election required to certify the BID’s continued operations. LAUSD has historically supported the BLQ BID and I am disappointed by their decisions not support us this time around. — Boo hoo hoo, amirite?!

⌘ May 21, 2018 — Don Duckworth to Moises Gomez: Excellent. Is there any chance of getting Councilman Cedillo to reach-out to Monica Garcia? The LAUSD Board could always reconsider their previous action. — Get for real, Don Duckworth! First of all, who cares, since the BID got enough petitions even without LAUSD. Second, why would Gil Cedillo have any sway over Monica Garcia? The LAUSD is famously legally independent of LA City Hall. The City Council has no power over the school board at all, and usually the two entities have a fairly hostile relationship. But dream on, Don Duckworth!

That’s the last information I have on this matter, but it’s so interesting, isn’t it, that LAUSD made such a radical turn-around? This might signal the beginning of a new era in no-longer-automatic government support for BIDs. I even have a little evidence that the City of Los Angeles itself is beginning to reign in its unconditional support. I hope to publish later today. Stay tuned!