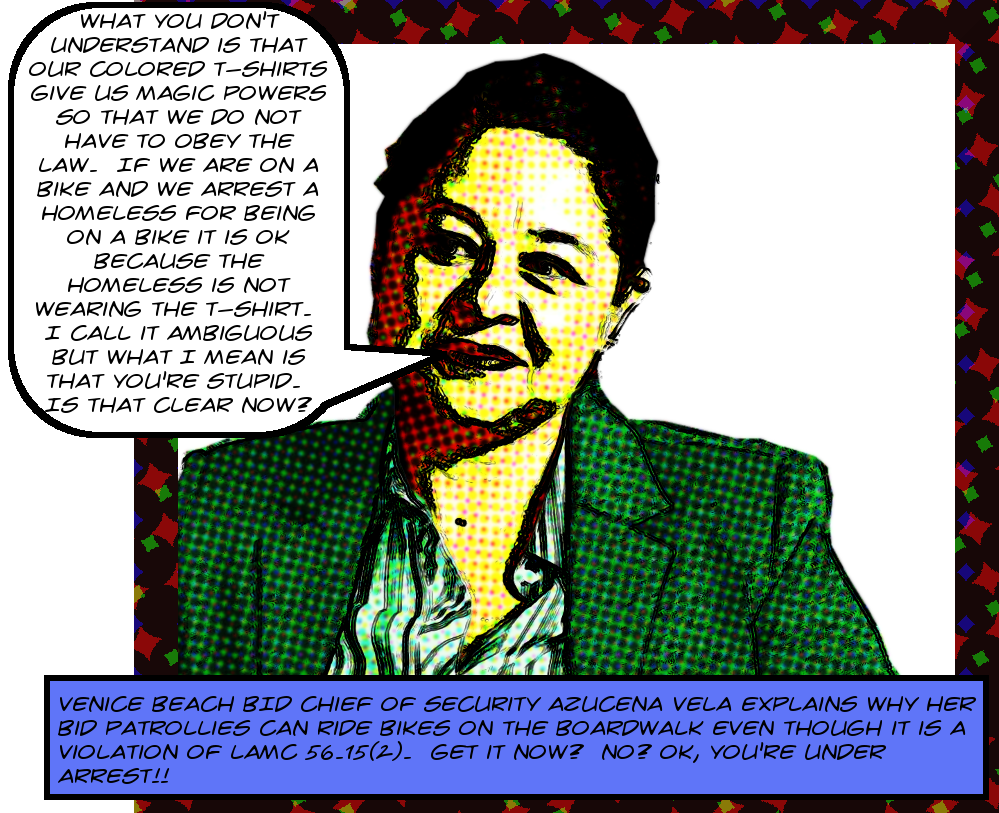 Yesterday was the second Friday of the month, so I hauled myself out West on the 733 to listen to the Venice Beach BIDdies babble on about whatever it is they’re talking about out there on Main Street, just inches from the Southern border of the City of Santa Monica. And naturally I videotaped the whole thing, and you can watch it here on YouTube or here on Archive dot Org as you prefer.

As always there was a lot of interesting stuff going on, and I’ll have at least one more post for you about it, but today’s topic is the security report by BID Patrol boss Azucena Vela of Allied Universal security. Here’s how it all went down. First, famous-in-Venice member of the Neighborhood Council Colleen Saro spoke during the newly attenuated public comment period. You can watch her here. She had a lot to say, but the salient bit was her comment on the BID Patrollies riding their damn bikes on the Boardwalk:

And if you know anything about Venice you know that, first, bikes on the Boardwalk are a big problem. People who ride them there are your basic antisocial psychopaths who are so fixated on their own convenience that they don’t care at all about running over children, old people, wheelchair riders and other human beings who can’t dodge quick enough. Also, second, it is actually against the law to ride a bike on the Boardwalk. It says so explicitly at LAMC §56.15(2):


So Colleen Saro’s point is a good one. The BID Patrollies are supposed to enforce the law. Part of that is telling people to stop riding their damn bikes on the Boardwalk. But if the BID Patrollies are sitting on a bike when they’re doing this, there’s a problem, isn’t there? During her report, BID security chieftain Azucena Vela responded to this, but not in a way we expect a self-styled law enforcement professional to respond.

Here’s where her report started, and here is where she got around to responding to Colleen Saro. And here is what she had to say about her BID Patrollies riding their bikes on the Boardwalk:

we have started to do set up points at different areas of the boardwalk and we are off our bikes and we’re trying to stop them however it has become an issue when they refuse to stop or us escorting them to the bike path so being on the bikes becomes a lot more mobile and more agile.

What she seems to be saying here is that the BID Patrol gets off their bikes and waits at fixed positions for citizens to ride by on bikes. Then they tell them to get on the bike path. But if the people on bikes won’t stop then what are they supposed to do? Evidently they have to be on their bikes too so they can chase down the scofflaws.

Now, we’ve heard a lot of blather from BID supporters about how these BID Patrollies are not meant to enforce the law, but rather to “observe and report” when they witness violations. It’s a misdemeanor to ride a bike on the Boardwalk, so I suppose they’re witnessing violations, but this is really the first we’ve heard about them chasing down violators. What will they do when they catch one?

Now I understand that it creates that ambiguous situation. However there is a little bit of leeway when we have our our uniform on

No person shall ride, operate or use a bicycle or unicycle on Ocean Front Walk between Marine Street and Via Marina within the City of Los Angeles …

Do you see the part that says “unless they’re wearing a colored t-shirt in which case they have some leeway” in there? This is not an ambiguous situation, this is a case of private security guards committing misdemeanors in order to chase after people who refuse their orders, as they have every legal right to do. How is that ambiguous? It’s against the freaking law. It’s not ambiguous. There’s no leeway in laws, that’s not how laws work.

Well, I’m going a little too far there, I guess. That is how certain laws work in the City of Los Angeles. There are certain laws that homeless people are likely to break, like this one, like sitting on the sidewalk in the absence of a parade,1 like keeping one’s belongings on the sidewalk,2 and like this one. These laws do have some leeway. Like if you’re not homeless no one will arrest you for breaking them, and if you are someone may well arrest you for breaking them. So in that sense Azucena Vela is right, but I don’t think that’s the sense in which she was trying to be right. In that sense she’s quite wrong.

And just for good luck, Azucena Vela wrapped up the issue with one of the quintessential principles of facism, and this is where I’ll leave you as well. Most people don’t mind being illegally bossed around by thugs in colored t-shirts, so why are you complaining?!

Hi good morning. I just want to go over some of the completed items from the previous board meeting. We have scheduled our meet and greet with our homeless community it’s scheduled for at the Westminister Park July 18th between 1:00 p.m. and 5:00 p.m. as promised. The safety team has all badges to identify them. We have actually met with Becky Dennison to discuss coordinated efforts with our homeless community and we have met with Saint Joseph as well to provide direct referrals for building our homeless community. Now I want to address the the bikes and the and the birds on the boardwalk a little more intensively we have started to do set up points at different areas of the boardwalk and we are off our bikes and we’re trying to stop them however it has become an issue when they refuse to stop or us escorting them to the bike path so being on the bikes becomes a lot more mobile and more agile. Now I understand that it creates that ambiguous situation. However there is a little bit of leeway when we have our our uniform on and the safety team approaches everyone and normally and usually I would say about 99% of those that we do address have no issue going on to the bike path or the street this is an ongoing effort it’s it’s been ongoing for a really long time I think that since we’ve launched it’s going to be tomorrow two months we have you know have had great strides we’re not there yet we’re still working on it but in order to for us to continue to be able to do that we need to be able to be mobile and agile to answer to other calls with a little bit as well so that’s the importance of that

Image of Azucena Vela is §2018 MichaelKohlhaas.Org and is floofed up outta this right here.