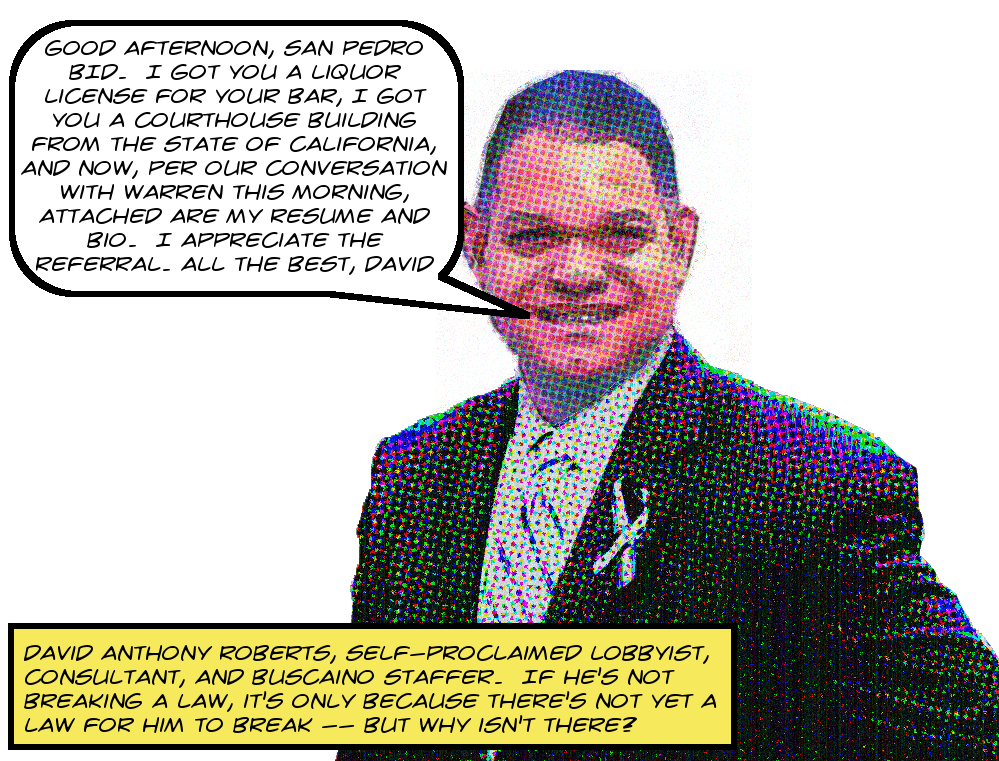 In the high and far off times, O best beloved, there was a candidate for Los Angeles City Council District 9, endorsed by the L.A. Times in 2013 and a favorite of both Bernard Parks and Jan Perry. Well, nothing works out like one expects in this mean old world and in these latter days our hero, whose name, by the way, is David Anthony Roberts, rather than having his own council district to do with as he might please, is instead some kind of high mückety-mücklischer poo-bah type guy in Joe Buscaino‘s employ over at CD 15.

And of course, if you’re going to be on Joe Buscaino’s staff you’re going to spend a lot of time working with the San Pedro Historic Waterfront BID. It goes with the territory. If the BID or its constituent conspirators need to get criminal trash-dumping charges fixed or maybe if they need to get criminal dog-grooming charges fixed or, I don’t know, need some bodies weighted down and dumped into the deeps off Terminal 26 or something, CD15 staff are gonna get a call or an email from Lorena Parker, San Pedro BIDdie extraordinaire. And, just because it goes with the job and stuff, sometimes the staffie under the gun is going to be David Anthony Roberts.

And then, because these people are so uniformly your-back-my-back-skritchy-skratchy, it’s not surprising that in September 2017 we find David Anthony Roberts emailing his resume to Lorena Parker after a conversation about it, using his lacity.org work email address, no less:

Per our conversation with Warren this morning, attached are my resume and bio. I appreciate the referral.

And it’s not at all surprising to find, just a few minutes later, Lorena Parker forwarding the material to Warren Gunter, Warren Gunter being some San Pedro zillionaire property owner and BID board member, who’s evidently going to hook David Anthony Roberts up with some kind of job:

And that’s all shady enough, although without knowing what kind of job is on the table it’s hard to tell precisely how shady it is. However, the two attachments to David Anthony Roberts’s email crank the shady up to eleven. Take a look:

And especially take a look at the very last item on the first page of the resume of David Anthony Roberts. It turns out that he has his very own consulting company, named after him, and he’s not only the owner, he’s the president as well.2 And here’s how he describes what this little entreprenurial slice of cake is all about:

President
David A. Roberts & Associates
Government and Strategic Relations
10/2013 – Present
Consulting service and lobbying firm specializing in public policy analysis, government and public affairs, advocacy, land-use, entitlements and economic development. David A. Roberts & Associates have long-standing and extensive relationships with elected and appointed officials, as well as executive management and staff with local municipal departments and public agencies in the City of Los Angeles. The firm has a thorough understanding of how public policy decisions are made, and who makes these decisions. Throughout his career, Roberts has overseen capital projects totaling over $2.5 billion, and keenly understands the art of balancing political, bureaucratic and community outreach to ensure the successful completion of projects. Clients include business and trade associations, public agencies, elected officials and non-profit organizations.

However, §49.5.13 is not the only muni code section that deals with employment. There is also LAMC §49.5.7, which is entitled “Honoraria and Outside Employment.” It’s conceivable that this might apply to ban City staffers, such as David Anthony Roberts, from accepting money to influence their colleagues. The first relevant bit seems to be §49.5.7(C)(1)(b), which states, after removing some of the formatting:

So maybe David Anthony Roberts got prior written approval from his boss3 to be a lobbyist while still working for the City. I asked CD15 but they haven’t yet responded.4

Oh, and just plain common sense suggests that permission from the boss is necessary for working an extra gig, but it can’t possibly be sufficient. Like what if the night job is something really reprehensible?5 And this turns out to be the case, as reflected in Subdivision (3), which is worth quoting at length here:

The approval required by Subdivisions 1. and 2. shall be denied if the general manager, chief administrative officer, appointing authority, or Ethics Commission determines that receipt of the payment would be inconsistent, incompatible, in conflict with, or inimical to the City official’s official duties, functions, or responsibilities. Such a determination must be made if one or more of the following factors applies:

a. The payment or the services for which the payment would be received would involve any of the following:

i. The actual use of or the appearance of the use of public office, employment, time, facilities, equipment, or supplies for private gain;

iii. Such time demands that the City official’s performance of official City duties would be rendered less efficient.

c. The City official is in a position to make, participate in making, or influence a City decision that could foreseeably have a material financial effect on the source of the payment.

And which of the circumstances apply which might make it mandatory that someone, anyone, find that David Anthony Roberts should be denied permission to run this lobbying firm? Well, first and foremost, how about this one: Such a determination must be made if one or more of the following factors applies …The City official is in a position to make, participate in making, or influence a City decision that could foreseeably have a material financial effect on the source of the payment.

After all, what are lobbyists selling but their ability to “influence a City decision”? And why are their customers buying this influence? They’re almost certainly not paying actual money to lobbyists for the purpose of influencing City decisions out of some kind of altruistic instinct. They must be buying influence because it helps them make money. Like their development projects get approved, or laws reigning in their capitalistic frenzies don’t get passed, or whatever.

No one is going to pay zillions of dollars to a lobbyist unless the lobbyist can affect … a City decision that could foreseeably have a material financial effect on the source of the payment.” That’s what lobbyists do. This isn’t even to mention subpart (a)(i): “The actual use of or the appearance of the use of public office [or] employment … for private gain” I mean, what’s he selling if not his connections to City officials. Why does he have them? Because he’s in office.

Thus it seems like David Anthony Roberts, if he even has permission to run this business, must now be denied such permission. Obviously Joe Buscaino isn’t going to do it. He’s certainly still too busy rolling around in his ill-gotten gains like freaking Scrooge McDuck. That leaves the Ethics Commission. I’m going to send them a letter about this in the next week or two. Look for it here, friends!

Image of David Anthony Roberts is ©2018 MichaelKohlhaas.Org. It’s all mooshed up outta this item here.