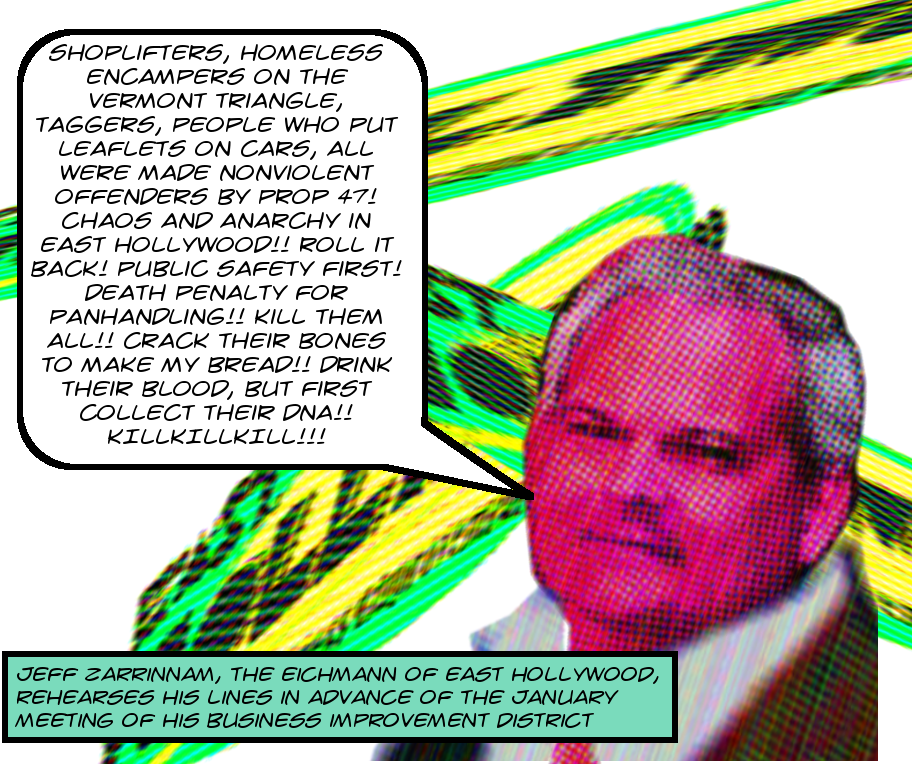 One of the most neglected aspects of the Property and Business Improvement District Act, the fons et origo of the state’s grant of authority to establish, regulate, and control BIDs, is a limitation found in §36625(a)(6), which states:

This places two essential limitations on how BIDs are allowed to spend the money they collect from property owners.1 First, BIDs must only spend their money on stuff inside their districts, and second they must only spend it on activities specified in the resolution of intention to form the district. In the City of Los Angeles, at least, these activities are specified by incorporating the BID’s management district plan, which is filed with the City Council at some point prior to the BID’s formation, into the ordinance of intention.2

Now, if you follow this blog even half-heartedly, you’re well aware that this statute is completely flouted by BIDs in the City of Los Angeles. For instance, Blair Besten’s lobbying over Skid Row, which isn’t part of the Historic Core BID at all, not to mention Hurricane Kerry Morrison’s indefatigable lobbying everyone in the whole freaking universe over reforms to the Public Records Act.

And of course, all of them, every last delusional white supremacist BID in the whole freaking City of Los Angeles lobbying3 against Proposition 47, a particularly half-witted example of which can be found here. Which brings us to today’s subject, which is that squarmy little love child of Jeff Zarrinnam and David Miscavige known to the world as the East Hollywood BID.

It seems that at their upcoming meeting,4 at least according to the agenda, they’re poised to discuss the following item:

And turn the page for details and discussion!

First of all, according to the Wiki, anyway, Jim Cooper is some kind of former cop, now Assemblymember, and he’s evidently sponsoring an initiative to roll back Prop 47 reforms because FREAKING CRIMINALS! And the BID is right up in there with the dude. This item comes with a bunch of powerpoint and other propaganda, which you can find here on the Archive or through these individual links:

According to the Initiative draft language, this proposition has three purposes:

And according to the Powerpoint thing on the initiative, these putative enhancements to putative public safety are somehow, in a way which no doubt makes sense to cops and their fluffers if no one else, intimately tied into expanding the death penalty in California. Now, obviously this is typical fascist cop-loving propaganda bullshit containing more lies than stars in the skies and if it passes it will be horrible for the state of California and will almost certainly lead to even more human suffering, not to mention renewed federal oversight and mandated releases from prison.

A detailed discussion of such matters, though, is beyond both the scope of this blog and my personal expertise.5 I’m just concentrating here on the intersection of the presence of this propaganda effort on the BID’s agenda with the limitations on BID activities imposed by the PBID law at §36625(a)(6).

In particular, there are two requirements which must be met before the BID can spend its money on this nonsense. Oh, before I get to the two requirements, let’s discuss what it means for BIDs to spend money. It’s my opinion6 that when the legislature inserted this statute section limiting how money could be spent, they were exercising the power of the purse.

That is, I think their intent must have been to control the activities of BID staff, who after all are paid out of assessment money, as well as actual direct expenditures. The argument is, therefore, that BID staff activities are covered under the law’s restrictions on how assessment money can be spent.7 Now on to the two requirements!

First of all, according to §36625(a)(6), [t]he revenue from the levy of assessments within a district shall not be used to provide improvements, maintenance, or activities outside the district. Second, the revenue may not be used for any purpose other than the purposes specified in the resolution of intention.8

Let’s look at the second one first. If you want to, you can take a look at the actual resolution of intention for the East Hollywood BID as passed by City Council in July 2011. It’s not that informative, though. As is typical for these things, the specified activities are dealt with by incorporating the so-called Management District Plan:

Sec. 8. IMPROVEMENTS AND ACTIVITIES. The City Council hereby declares that the proposed activities and improvements to be funded by the levy of assessments on property within the District are detailed in the Management District Plan. They include, but are not limited to, Streetscape and Landscape Projects, Maintenance, Administration and Advocacy, and Marketing and Promotion.

The Management District Plan is a requirement of the BID Law, which requires it at §36622. I don’t want to quote, because that particular section is super-technical and long, but essentially the MDP must contain, among many other things, a description of what’s to be done with the money. You can read the EHBID’s current MDP if you’re interested.9 Here’s what it has to say about advocacy, which I suppose is the only plausible category for the present nonsense:

Now, I suppose that the case can be made that supporting a Prop 47 rollback “enhance[s] the District’s ability to develop as a vibrant commercial area,” but only in some broad, not all-that-convincing, sense. One might argue, e.g., that Prop 47 causes crime,11 that crime hinders vibrant12 commercialism, and thus that EHBID staff’s support of a Prop 47 rollback falls within the purview of the MDP as stated. Hold that thought.

Now let’s take a look at the first13 limitation on BID expenditure imposed by §36625(a)(6), that is, that “[t]he revenue from the levy of assessments within a district shall not be used to provide improvements, maintenance, or activities outside the district.” As before, it’s marginally plausible that the EHBID’s support of this anti-Prop-47 initiative affects conditions inside the district. The potential argument given above still works. But in this case I think that the statutory language precludes that argument.

That is, even though it’s true that state laws affect conditions inside a BID, they only do so in the broadest sense that everything in the world affects everything else in the world. For instance, if there’s a nuclear war, it would pretty much wipe out East Hollywood as a “vibrant commercial area.” Thus, the argument might go, the BID can spend its money lobbying against nuclear war. Nuclear war would inevitably be an activity inside the district.

Or, e.g., federal tax laws affect conditions in the district. If corporate taxes are cut essentially to zero it’ll give the property owners in the district more money to pay higher assessments, so why not spend BID money supporting Donald Trump for president? The same kind of reasoning could support BID expenditures on lobbying about, I don’t know, Mars colonization, bilingual education policy, foreign aid to Zambia, or whatever.

And this style of argument doesn’t just work for advocacy. After all, actual conditions outside the EHBID affect the economy inside it. What if there were a giant homeless encampment at the corner of Melrose and Juanita, which is just outside the BID’s boundaries?14 Would it not improve the situation of the properties right across the street from there in the BID if this encampment were to be eliminated? Does that idea not provide an argument for spending BID money on security to hassle the homeless just outside the BID’s borders, since their presence adversely affects conditions inside.

And this, it turns out, violates one of the canons of statutory construction, namely the rule against surplusage, which states, according to the Wiki:

Where one reading of a statute would make one or more parts of the statute redundant and another reading would avoid the redundancy, the other reading is preferred.

If the removal of a clause from a statute fails to change the range of application of the statute, the clause is certainly redundant. Hence this clause can’t mean what it would be required to mean to validate any of the given arguments in favor of allowing BIDs to spend money lobbying on state-level initiatives and policies.

Anyway, that’s my argument. At some point I’ll have enough money and lawyers to test it out, and when I do I’ll certainly write about it here. Meanwhile, stay tuned, and maybe I’ll see you at the EHBID’s meeting on Tuesday!

Image of Jeff Zarrinnam engaging in activities is ©2018 MichaelKohlhaas.Org and was foozled out from this “handsome” fellow right here along with this little peepster. Make of it what you will.