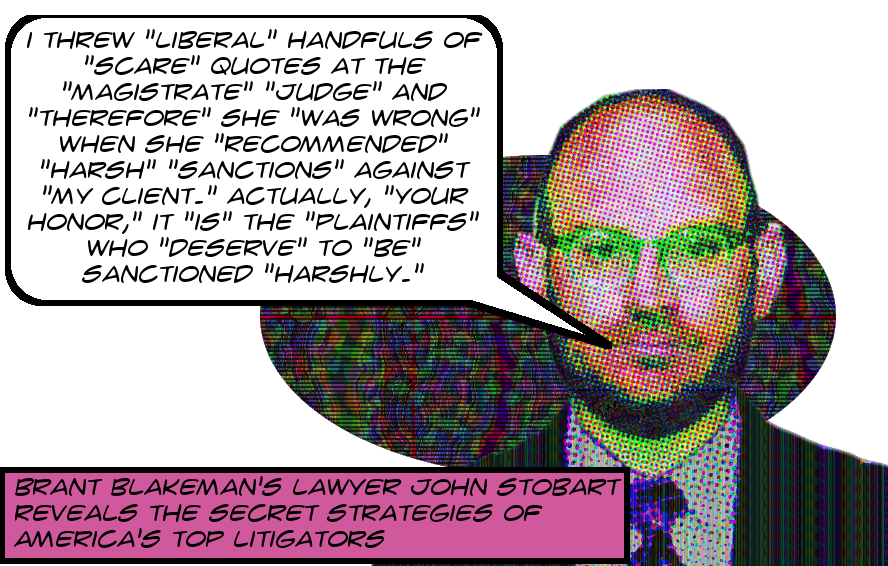 … that Plaintiffs are permitted to depose Defendants Sang Lee, Charlie Ferrara, and Frank Ferrara regarding issues relevant to spoliation, with costs to be shared by Plaintiffs and the deposed Defendants. At trial, the parties will be permitted to present evidence and argument related to the unrecoverable text messages for Defendant Lee and the Ferrara Defendants and the unavailable cellular billing records for Charlie Ferrara.

This was not unexpected, but it’s interesting nevertheless. However, the plaintiffs’ motion for sanctions against these three clowns was not the only such motion concerning which Rozella Oliver has recommendations. There’s also, of course, her report on Brant Blakeman and his wildly antisocial handling of evidence in his possession. Well, on December 27, John Stobart, Blakeman’s lawyer, filed an opposition to Oliver’s recommendations, and this morning the plaintiffs responded to Blakeman’s objection. The two pleadings are available here:

The plaintiffs’ response was written by the agressively sane Samantha Wolff of Hanson Bridgett. And it’s definitely worth reading, but it’s, you know, competent, prudent, measured, and so on. Therefore there’s not much for me to comment on.

On the other hand, Brant Blakeman’s objection, written by John Stobart, is, as befits the rapiest Bay Boy, a surreal sludge pot of scare quotes, sophomoric sarcasm, and generalized cack-handedness, and, as such, is required reading!1

Selections after the break, and please, note that I didn’t add a single quotation mark. Not a single one. Footnotes also are as in the original,2 and read them if you want to see some of John Stobart’s most flamboyantly weird scare quotation.

Plaintiffs brought this motion against Brant Blakeman under Rule 37(e) seeking two substantive sanctions regarding “lost” text messages: (1) the denial of his motion for summary judgment and (2) an adverse inference regarding the contents of the text messages at trial. … Plaintiffs also requested attorney’s fees for bringing the motion.

Under subsection (e)(2), the substantive sanctions plaintiffs requested required an evidentiary showing that Mr. Blakeman had an “intent to deprive” them of the “lost” text messages. Since the moving papers failed to advance any argument or evidence that Mr. Blakeman had such intent, the request for “harsh” sanctions under subsection (e)(2) had no evidentiary support and was frivolous under Rule 11(b)(3).3

Plaintiffs were completely unsuccessful in obtaining any of the substantive
relief they sought.4 The Magistrate Judge agreed that there was “no evidence” to support the “harsh” sanctions they expressly requested. Nevertheless, there was a finding of prejudice and a recommendation that other unrequested “measures” be granted to cure the prejudice, i.e. a second, all expenses paid deposition of Mr. Blakeman and the right to inquire about the missing texts messages at trial.5 It is also recommended that Mr. Blakeman pays the attorney’s fees related to plaintiffs’ otherwise unsuccessful motion. The result, whether intended or unintended, is that the plaintiffs brought this motion just to make Mr. Blakeman pay for it.

Here, just as there is no evidence that Mr. Blakeman operated with an “intent to deprive,” there is no evidence he acted in “bad faith” either. The findings that “Blakeman could have locked the text messages from being deleted or overwritten” on his archaic flip-phone is speculation because no such technical evidence was before the district court. Nobody knows whether the four texts at issue still existed when Mr. Blakeman’s duty to preserve arose on April 14, 2016. The fact that two of the text messages at issue were sent two-days prior has no inferential value because the only “evidence” before the court regarding cell phone memory is that it can be automatically overwritten without direction from the user. There is no “evidence” about how Mr. Blakeman’s phone operates because the plaintiffs never requested production of the phone nor had it forensically analyzed, despite knowing the phone existed since his deposition on November 21, 2016, and that the text messages at issue existed as early as May 2017. Given Mr. Blakeman’s complete lack of tech savvy, there would be no reason for him to write down “what he recalled about the text messages” immediately after being served with the lawsuit.6 It would be a mischarge of justice to find Mr. Blakeman in bad faith for not taking the hypothetical steps to preserve the text messages that were developed by the Magistrate Judge in hindsight.

Image of John Stobart is ©2017 MichaelKohlhaas.Org and was mumblyfied up outta this lil item here.