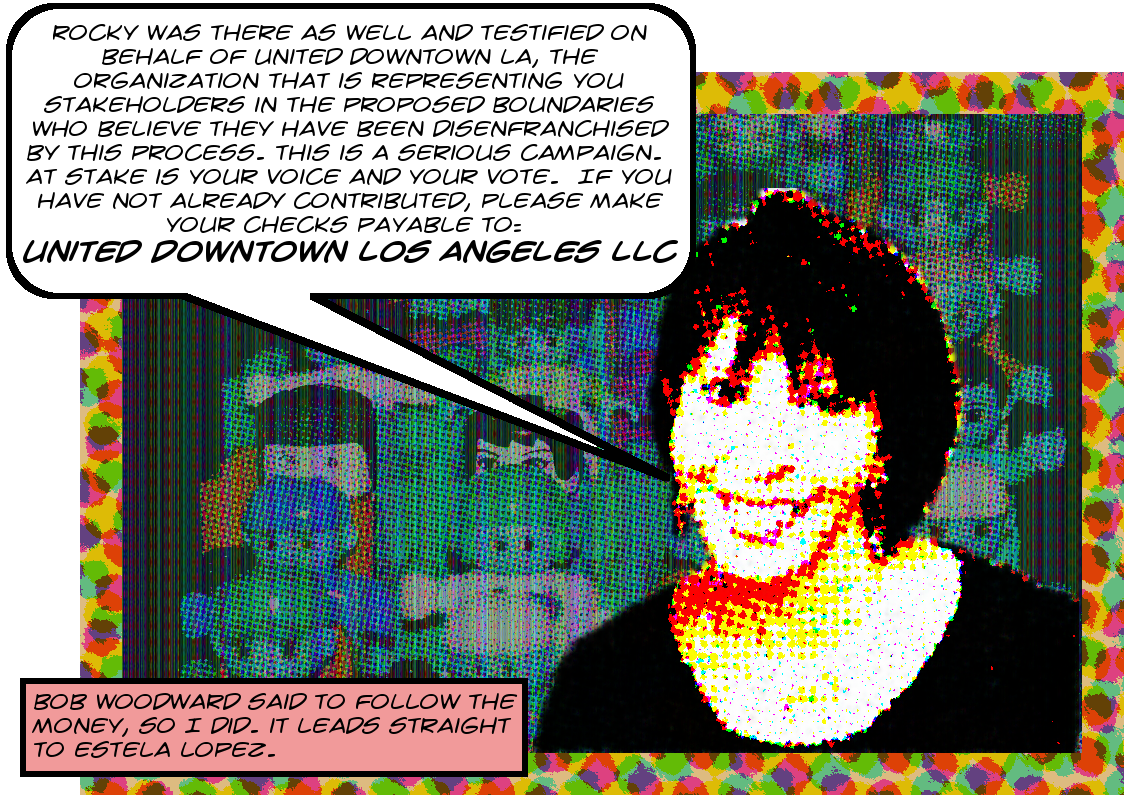 You may recall that the first anyone heard publicly from this bunch of dimwits was on March 17, 2017, when Rockard Delgadillo, former City Attorney of Los Angeles and employee of lobbying firm Liner LLP, wrote his infamous letter to the Department of Neighborhood Empowerment demanding for various nonsensical reasons that they put a halt to the Skid Row Neighborhood Council formation process.

The next milestone was a meeting between Estela Lopez of the Central City East Association, Rena Leddy of the Fashion District BID, and Rockard Delgadillo. This took place at 11 a.m. on March 20 and was actually organized by Estela Lopez, who scheduled the meeting on March 18. Less than an hour after this meeting ended, Rena Leddy was emailing her property owners with the gospel of the birth of United Downtown Los Angeles.

Finally, in July I learned that United Downtown LA has the same phone number as the Central City East Association. This is all reasonably strong but not conclusive evidence in favor of the proposition that Estela Lopez was in control of United Downtown, if not its actual founder. And that brings our story to the present day.

Newly obtained evidence, part of the massive release of emails from the Downtown Center BID, shows that by a little after 5 p.m. that evening, Estela Lopez was emailing a large group of anti-SRNC conspirators, announcing the existence of United DTLA, distributing talking points prepared by United DTLA to be used at public hearings on the SRNC, and, most amazingly, soliciting donations from the recipients in the form of checks made out to United Downtown Los Angeles LLC. You can read the email here and, as always, there’s a transcription below.1

Here are some reasons why this email, along with the timing of the already-known facts and the phone number thing, suggest very strongly that Estela Lopez was running United DTLA:

So that’s what I have. Estela Lopez either ran United DTLA or knows who did and was in constant communication and cahoots with them. She was in with them enough to handle their money and lend them her phone number. My guess is that she and Rockard Delgadillo started United DTLA together, brought Rena Leddy in on it later, and then brought in the rest of the six-fingered minions that appear on the list below. Research continues, so stay tuned!

Just a quick update on the meeting this afternoon at City Hall.  This issue was before the Board of Neighborhood Commissioners.  Thank you to each of you who were there in person to testify to the failure of proper notice and extreme limitations on voter engagement.  All of your testimonies will now go into the public record together with the letter prepared by Rocky Delgadillo, and will form the basis for challenging the City’s process thus far.

Rocky was there as well and testified on behalf of United Downtown LA, the organization that is representing YOU stakeholders in the proposed boundaries who believe they have been disenfranchised by this process.

In the end, the Board of Neighborhood Commissioners took no action.  Their position is that they have no jurisdiction to postpone the election.

The next IMMEDIATE step is to call on Councilman Jose Huizar to support the community’s call for a postponement of this election.  Call or email the Councilmember TODAY.  Below and attached are brief bullet points you can use.  The Councilmember can be reached at 213-473-7014 and at jose.huizar@lacity.org.

The next and final community “town hall” meeting is scheduled for Wednesday, March 29 at 6pm.  It was announced today that the location for this meeting has changed.  It will now take place at the headquarters of the LA Community Action Network (LA CAN), 838 E. 6th Street.

This is a serious campaign.  At stake is your voice and your vote.  If you have not already contributed, please make your checks payable to:

• I am a business owner/property owner within the boundaries of the proposed Skid Row Neighborhood Council.
• I am extremely concerned about the lack of notice and numerous flaws in the process conducted thus far by the Department of Neighborhood Empowerment.
• I am one of a very large group of stakeholders who did not receive any information from the City about this proposal.  We do not know what this means for us, who is for or against this proposal, or why this is being proposed.
• We are now learning that the election is April 6.  We have also learned that the election will be held in one location for four hours.  That is an impossible situation for the many persons affected by the outcome of this election.
• It seems to us that our right to be informed and our right to vote in a City election is being completely violated.
• This election must be suspended until such time that there is adequate information, notification and opportunity for all interested stakeholders to vote.

Image of Estela Lopez is ©2017 MichaelKohlhaas.Org and was painstakingly mashed up out of this Estela and these willing minions.