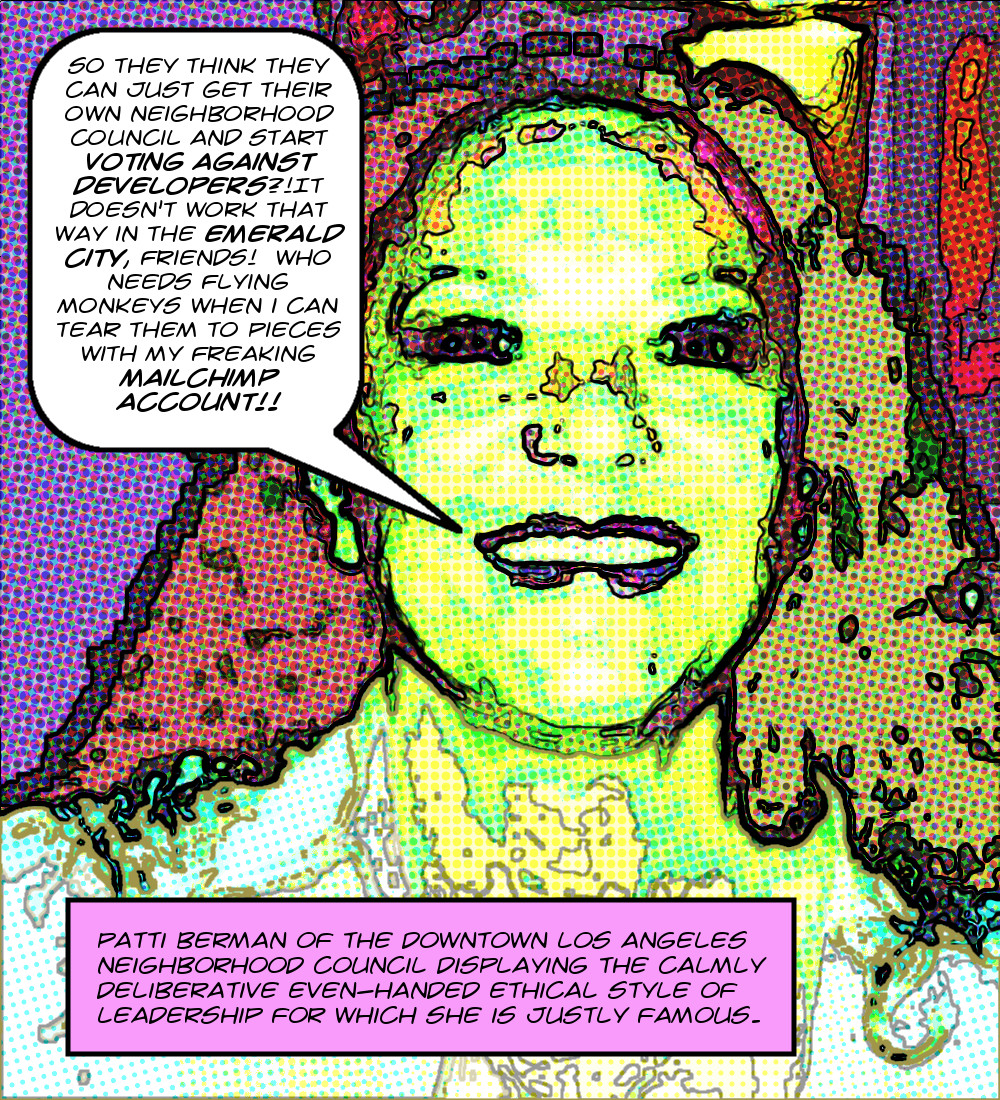 Recall that just last week the proposed Skid Row Neighborhood Council was narrowly defeated in a hotly contested, deeply controversial election. I reported at the time that CCEA voodoo queen Estela Lopez seemed to be deeply involved in some as-yet-unclear way in the anti-SRNC campaign. This is bad and creepy, but probably not illegal, as lobbying the City seems to be in the job description of business improvement districts.

Well, just tonight it’s come to my attention that General Jeff and Katherine McNenny have discovered that Patti Berman, chief boss-lady of the Downtown Los Angeles Neighborhood Council, or anyway someone with access to DLANC computer accounts, evidently used City resources to campaign against the SRNC. You can watch them here explaining the proof. It boils down to the fact that DLANC used their Mailchimp account to send out email blasts, which incorporated the City logo, urging people to vote against SRNC. This is bad and creepy and probably illegal. General Jeff promises in the video to use it to challenge the outcome of the election.

Not only that, but an anonymous group calling itself “United Downtown LA” hired former City attorney Rocky Delgadillo to write to the City Council urging them to adopt online voting for the SRNC election even though it has not been used in most other NC certification elections. Online voting, of course, is what did in the SRNC, as the paper ballots were overwhelmingly in favor of formation. You can read the whole Council file here and Delgadillo’s letter in particular here. Well, you can also see in the video that General Jeff and Katherine McNenny have made that DLANC was using the name “Unite DTLA” to carry on their covert campaign. Whether these are the same shadowy anonymous entity remains to be seen, of course.

However, of interest to municipal ethics geeks like the staff and at least some of the readership of this blog is the fact that Delgadillo’s employer, Liner LLP, is registered with the City Ethics Commission as a lobbying firm.1 This places them under certain legal obligations to reveal the identities of their clients.2 So we’re keeping a close eye on the City Ethics Commission website to see if they comply with the disclosure requirement in a timely manner. If they do, we’ll find out exactly who’s behind the whole campaign and whether DLANC’s front group Unite DTLA is the same as Liner’s client United DTLA. If they don’t, I will turn them in to the Ethics Commission. So in the face of the huge loss of the SRNC election, at least we have some kind of win to look forward to.

The picture of Patti Berman started its life as a public record hosted by DLANC and I transformed it to the point where it is entirely reasonable for me to claim that it is now ©2017 MichaelKohlhaas.org.