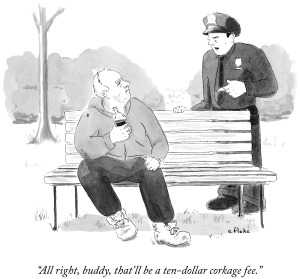 As of October 2014 the Hollywood Entertainment District BID and the Sunset-Vine BID had made over 600 arrests for drinking in public. Annualized this is over 700 arrests for 2014. By that point they’d made 945 arrests, which we’ll annualize to 1000 for ease of calculation. Thus around 70% of the arrests that BID security makes are for the simple act of drinking alcohol in public. In 2013 the Entertainment district seems to have spent about $1,600,000 on security.1

Thus we can estimate that the BIDs pay about $1,600 per arrest (about $1,120,000 per year) to arrest people for drinking in public. This is around a third of their annual budget and, of course, where your treasure is, there will your heart be also. The BID is really in a tizzy over this. In this issue of their newsletter you can read as Kerry Morrison frets and frets about what to do:

For the past seven years, it has been evident that a prime day-time issue impacting the Hollywood Entertainment District (and its sister BID to the south, the Sunset & Vine BID) has been the neighborhood impacts resulting from people who are drinking in public.

Nowhere in this article does Kerry say what the “neighborhood impacts” are. She does, however, give the alert reader a clue:

This problem is well-documented, owing to the records kept by Andrews International, the BID’s security vendor. For example, consider the following:

The “neighborhood impacts,” it seems, are that a lot of people are getting arrested for drinking in public. We agree with Kerry that this is a serious problem. Hyperenforcement of petty laws is not just a waste of money, it’s also bad public policy and extremely harmful to the people who get arrested.

Arresting people at this oncological rate damages lives. It also creates and nourishes violent conditions like those that led to the death of Eric Garner, a victim of hyperenforcement of stupid laws by overzealous security forces. We are thrilled to read that Kerry is concerned about this. We’d thought that since she directs the funding of the BID patrols she supported their actions.

The BID’s proposed solution, limiting sales of cheap alcohol has, we can say with the certainty of hindsight, been a failure. In 2014 arrests are up dramatically despite the BID’s best efforts. It’s time to think outside the box, move our cheese, seek a disruptive-transformative paradigm shift, or whatever infelicitous, managementological, self-satisfied phrase it is that the BID people use when they toss back a paper cup of (non-alcoholic) purple kool-aid.

First of all, drinking in public was legal in Los Angeles until 1983, so how much of a problem could it be? And why was it made illegal? Because that was the year the California Supreme Court (rightfully) struck down state laws against vagrancy.2 Left without a way to arrest homeless people for no reason, the LAPD begged the city council to provide them with a new weapon. The point is that LA’s law against public drinking exists solely as a tool to oppress the homeless. Drinking in public per se has never been a problem in Los Angeles, or there would have been a law against it earlier.

Secondly, drinking in public is legal in many places. New Orleans is a famous example, but even humble Sonoma, California allows it.2 Is the world ending in Sonoma? Butte, Montana?3 Erie, Pennsylvania?3 Legal public drinking is also good for business, so much so that cities all over the United States are overturning laws against it.3

So what’s the solution to Kerry’s “prime day-time issue impacting the Hollywood Entertainment District? My God, just stop arresting people for drinking in public. Everyone likes to drink. People drink in bars, in restaurants, and in their homes. If they don’t have homes, they drink on the street. Kerry’s failed pilot program to stop selling cheap alcohol and measure the effects has been a dreadful failure. We propose a new pilot program. Stop enforcing the law and see if anything happens.

This worked perfectly well here until 1983. There’s no reason to think it’ll ruin anything now. And maybe it will increase business revenues. And we’ll be able to drink beer in parks again when we barbecue, like we could when we were kids.4 And the $1,120,000? We don’t know, spend it on some benches so the BID patrol can stop arresting people for sitting on the sidewalk or some public toilets so they can stop arresting people for pissing in public.


People, please! A little sanity and you can disband your whole misbegotten enterprise because every problem it’s meant to address will have vanished other than the fact you’ll still be able to see homeless people. If you can’t deal with that get the windows of your Land Rover tinted really dark. Problem solved! You’re welcome!

Cartoon by Emily Flake from the New Yorker Collection ©Condé Nast 2014 and is used here with permission. Image of people drinking in public and not getting arrested is ©2014 MichaelKohlhaas.org. Image of Butte, Montana, is public domain and via the Wikimedia Foundation here. Image of Land Rover also public domain via Wikimedia and available here.