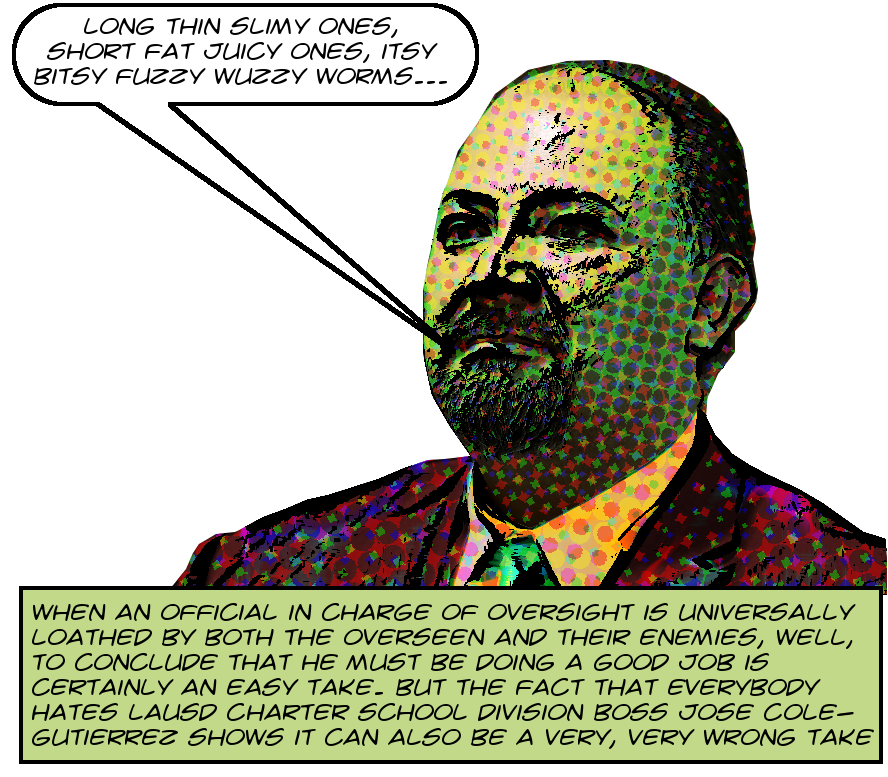 In June I received a massive set of really revelatory emails from Green Dot Charter Schools via the California Public Records Act. There’s a summary of what’s happened since then in this linked post. I have been working on organizing them to publish and at the same time telling stories based on them, and today’s post is another installment in that project.

The California Charter Schools Association sponsors a group of about 20 local charter school leaders, called the Los Angeles Advocacy Council, which meets regularly to plot and plan various pro-charter lobbying activities in LAUSD and a few other districts.1 The LAAC’s workings have hitherto been deeply buried. They don’t issue press releases for the most part, and they’re not really written about very much. As of right now, this blog is the top Google hit for them.

One thing revealed by these emails is that the LAAC is in no sense an egalitarian institution. There are about 20 members, but there is also an inner leadership group, consisting of Cristina de Jesus of Green Dot, Emilio Pack of STEM Preparatory Academy, and a bunch of CCSA flacks.2 This behind-the-scenes cabal shapes the activities of the group through weekly “check-ins,”3 at which they discuss their progress on their most cherished goals, which they call “North Stars”.4

And some of the most revealing records in this set are the leadership’s weekly updates. These are written by CCSA staff and show past progress and future plans for each of the North Stars. These, along with the monthly minutes of the meetings of the full LAAC expose all manner of wrongdoing, weirdness, and supervillainry, and are well worth your time to browse. They’re available on Archive.Org here:

★ Weekly updates — And lots and lots of other interesting items, too various to describe.
★ Agendas and minutes

And there are a million stories in those records, of which I can only tell one at a time. Today’s is about LAUSD’s charter school division, CSD in the vernacular. This office, headed by Jose Cole-Gutierrez, is charged with overseeing charter school operations in the district. And the charters don’t like it one bit. They don’t like being overseen, and they don’t like their overseers. And they would like to see Jose Cole Gutierrez fired and replaced with someone they see as more sympathetic to their cause.5

Some degree of antipathy between the overseen and the overseers is to be expected, of course. But CCSA’s antipathy, as exposed in these records, goes far, far beyond a bunch of charterites griping to the choir around some metaphorical cyberspaced water cooler.6 Whatever you as a sane person may think of privatizers, no one ever accused them of lacking initiative or imagination. In fact, CCSA has been trying to get Jose Cole-Gutierrez fired from his position at least since February 2018, using, at a minimum, the following tactics:

★ Meeting with LAUSD board members Ref Rodriguez, Monica Garcia, Kelly Gonez and Superintendent Austin Beutner to discuss how and why to fire Cole-Gutierrez and, egregiously, accepting concrete advice from Garcia about what kind of evidence the Board would need to be able to move forward on firing him.

★ Compiling a list of acceptable candidates to replace Cole-Gutierrez once they’d succeeded in having him fired.

So far Cole-Gutierrez has managed to hang on to his job in the face of this onslaught, but it’s not clear that he’ll be able to indefinitely. It’s possible that the only reason they haven’t been able to move in on him is that with Rodriguez’s ignominious departure they just don’t have the votes to finish the job.

I don’t have evidence that would explain Cole-Gutierrez’s survival, at least not yet. I am seeking it, of course, but the going is quite slow. It may well be years before we learn the rest of this story. And read on for links to documents and transcribed selections that tell this story in all the detail.
END_OF_DOCUMENT_TOKEN_TO_BE_REPLACED 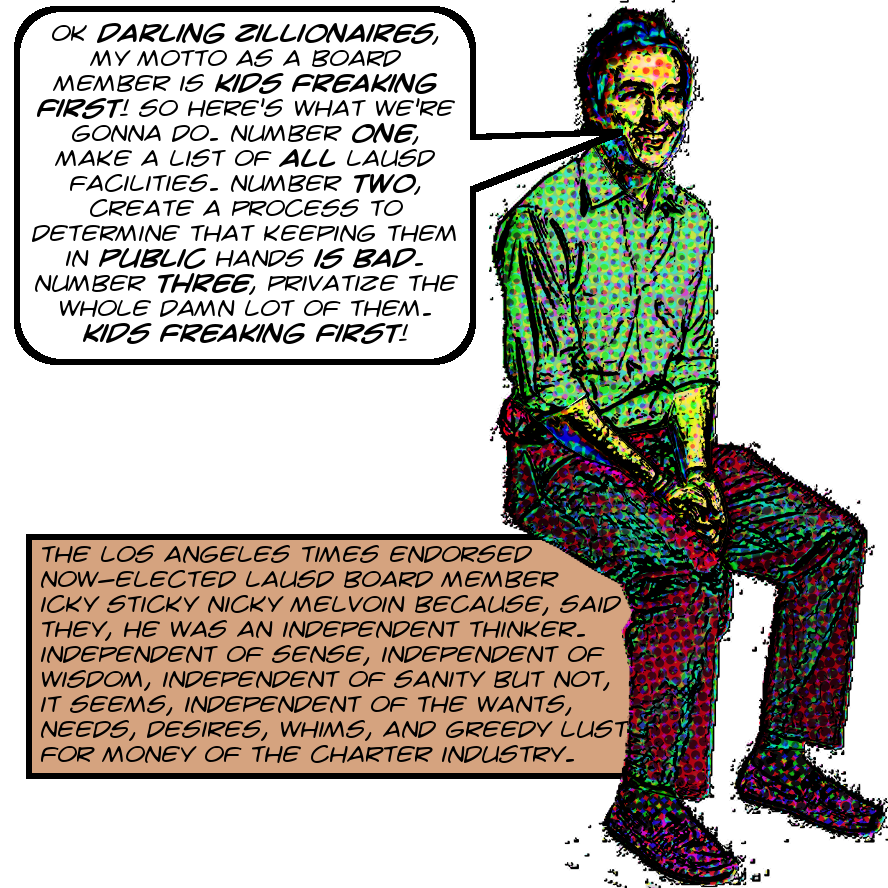 We’ve already seen that LAUSD officials, both elected and appointed, have a sickening penchant for sharing confidential materials with Charter lobbyists, giving them advance input into official policy proposals, and so on. I’ve recently reported, e.g., on an episode from September 2018 where Austin Beutner allowed Cassy Horton and Jed Wallace of the California Charter School Association to vet an upcoming speech and also to talk in advance with his speechwriter to explain what they thought ought to be included. Convicted felon slash former schoolboard member Ref Rodriguez did the same thing in March 2018 with respect to a board proposal.

And it turns out that, beginning in January 2018, LAUSD Board member and charter school bootlicker Icky Sticky Nicky Melvoin1 was involved in a very similar scheme having to do with LAUSD policies on school facilities, a subject which sounds tedious but is actually bureaucratic code for real estate, a subject which is at the very center of the zillionaire plan to loot the public treasure-stores for their own gain.2

Basically the proposal, which seems never to have made it out of the secret meetings, would have called for LAUSD to list all its facilities so that the privatizers could choose which ones to target, to allocate facilities between charter schools and public schools based on excellence and student success rather than on need, to authorize a putatively neutral third party to settle disputes over co-location offers, to study how to sell or lease LAUSD property to charters, and to do something complicated with bonds used to fund facilities. It all seems incredibly shady, shady beyond belief.

Icky Sticky Nicky was elected to the LAUSD Board in May 2017 after having been endorsed by the Los Angeles Times, which delusionally called him an “independent thinker” and also claimed that “Melvoin, who has worked for reform-oriented groups, is decidedly aligned with that movement but in a more balanced way than, say, Monica Garcia.” The LA Times reported on his July 2017 swearing in, and was, by then, after the election was over and the information could no longer sway a single voter, willing to state the relevant facts more explicitly, noting that Melvoin was “elected with the help of millions of dollars from charter school supporters.” The Times also quoted from Melvoin’s speech at the ceremony:

Today is not about the results of an election but about the emergence of a new paradigm. [I am a product of] the coalition that arose to implore us to lead with a simple yet radical maxim: Put kids first.

And today’s story concerns some ugly truth about Melvoin’s putative more-balanced-than-Monica-Garcia alignment with Charter school zillionaires and about what they bought from him in exchange for their zillions of dollars.3 About how these matters actually played out during his first year in office and, by extension, exactly how he interprets his “simple yet radical maxim: Put kids first.”
END_OF_DOCUMENT_TOKEN_TO_BE_REPLACED