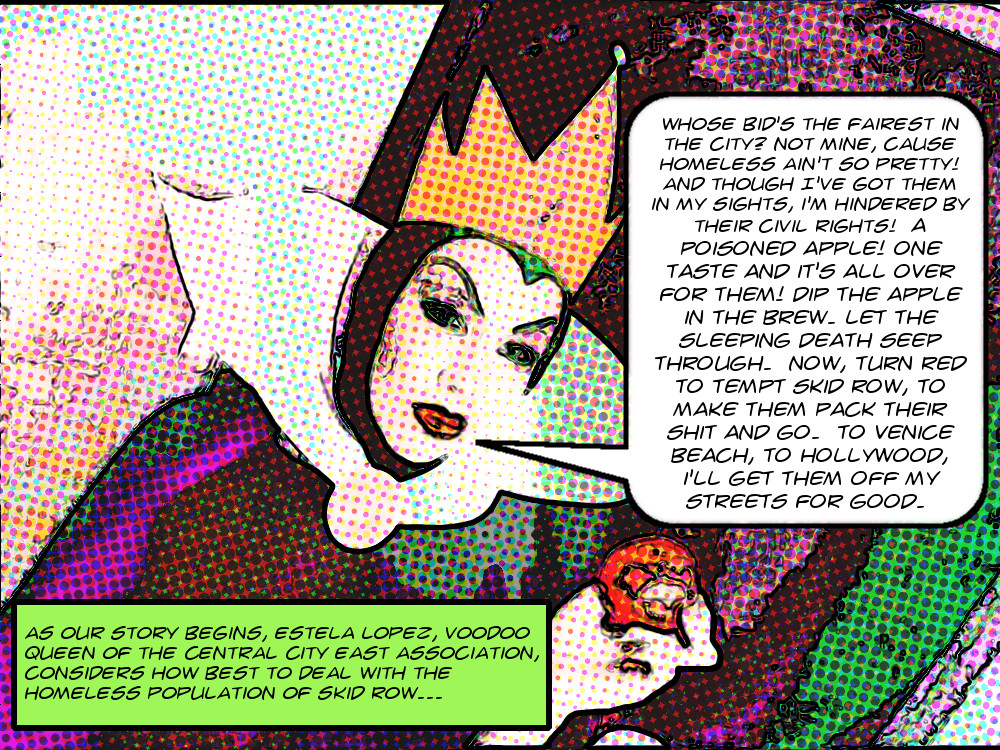 If you’re planning to attend today’s discussion between General Jeff and me about the Skid Row Neighborhood Council you may also want to download these materials:

That’s all, and I hope to see you this afternoon!

General Jeff and I will hold a public conversation on Saturday, March 24, at 3 p.m. about various aspects of the Skid Row Neighborhood Council formation effort. It will take place at the L.A. Poverty Department‘s Skid Row History Museum and Archive at 250 S. Broadway 90012. The event is part of the LAPD’s Public Safety for Real project.

I hope you will join us! And turn the page for essentially the same description of the event that you can find linked to above.
END_OF_DOCUMENT_TOKEN_TO_BE_REPLACED

Opening on Friday, March 9 at 6 p.m. at the Los Angeles Poverty Department‘s Skid Row History Museum & Archive see an exhibit of cartoons from this blog, a timeline and documents by General Jeff from the Skid Row Neighborhood Council Formation Committee, and videos by Linus Shentu. The exhibit will run through June 30. Here is the press release, and turn the page for a transcription.
END_OF_DOCUMENT_TOKEN_TO_BE_REPLACED

This is just a quick note to announce that video of Tuesday’s presentation at the LAPD is now available for your viewing pleasure. Here are the options:

Hey, friends! I’m speaking tomorrow night at the Los Angeles Poverty Department. The title of the talk is Bad BIDness in the City of Angels: Business Improvement Districts, Lobbying, and Class Warfare. It’s at 7:30 p.m. at 250 S. Broadway. Here’s a link to the Facebook event if that’s more convenient for you. This PDF contains somewhat more than I’m going to talk about. Perhaps I’ll see you there!

L.A. voters recently approved Measure HHH, which will fund homeless services via the sale of $1.2 billion in bonds. Last December the City Council approved the creation of a citizens’ oversight committee to monitor the expenditure of this vast sum of money. That committee consists of seven people, three appointed by the Council and four appointed by the Mayor. The Mayor doesn’t seem to have nominated anyone yet, but last Friday the Council, in CF 16-1060-S1, nominated their three. The only weirdo in the bunch is Blair Besten, executive directrix of the Historic Core BID downtown.

Of course, anyone who follows the bad BIDness propagated by our City’s business improvement districts knows this is a bad, bad idea for any number of reasons. It was therefore heartening to see, tonight, explicit opposition to Blair Besten’s appointment coming from a coalition of Skid Row organizations and service providers. Their eloquent and well-argued letter hit the Council file mere moments ago. You can read the whole thing after the break if you don’t like PDFs. Now, I have to say that I agree with their reasoning, and from the point of view of sound public policy, I completely agree that her appointment is a terrible idea. However, for for purely selfish reasons I kind of hope she makes it on, because the potential for chaos is high. Note that this is up for a vote TOMORROW.
END_OF_DOCUMENT_TOKEN_TO_BE_REPLACED