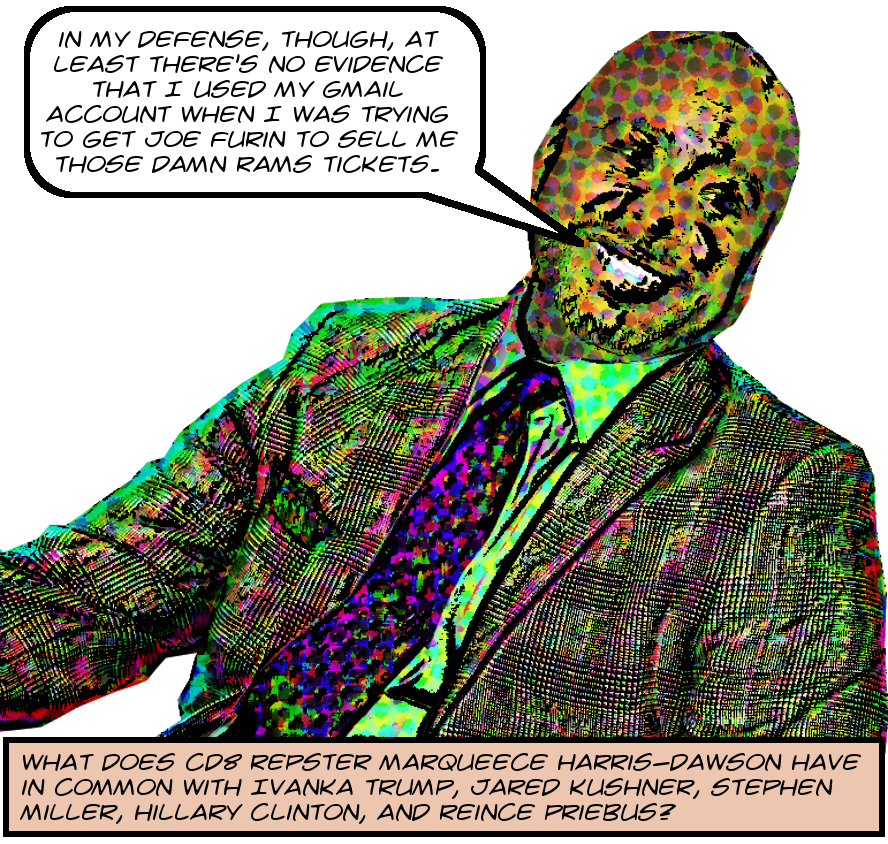 Bunches of creepy Trumpian fascists are rightly and regularly criticized in the national press for exactly the same practice, and yet, at least so far, this is a complete nonstory in Los Angeles.5 And this is far from the only interesting item in this set. Just for instance, there’s a conversation between Rivera and Joe Furin, general manager of the Coliseum, and Sherry Caldwell, the Coliseum’s director of ticketing, trying to arrange for a pair of Rams tickets for Harris-Dawson to purchase at $255 each. Oh, and after all the talk, Harris-Dawson doesn’t even end up wanting the tickets!
END_OF_DOCUMENT_TOKEN_TO_BE_REPLACED 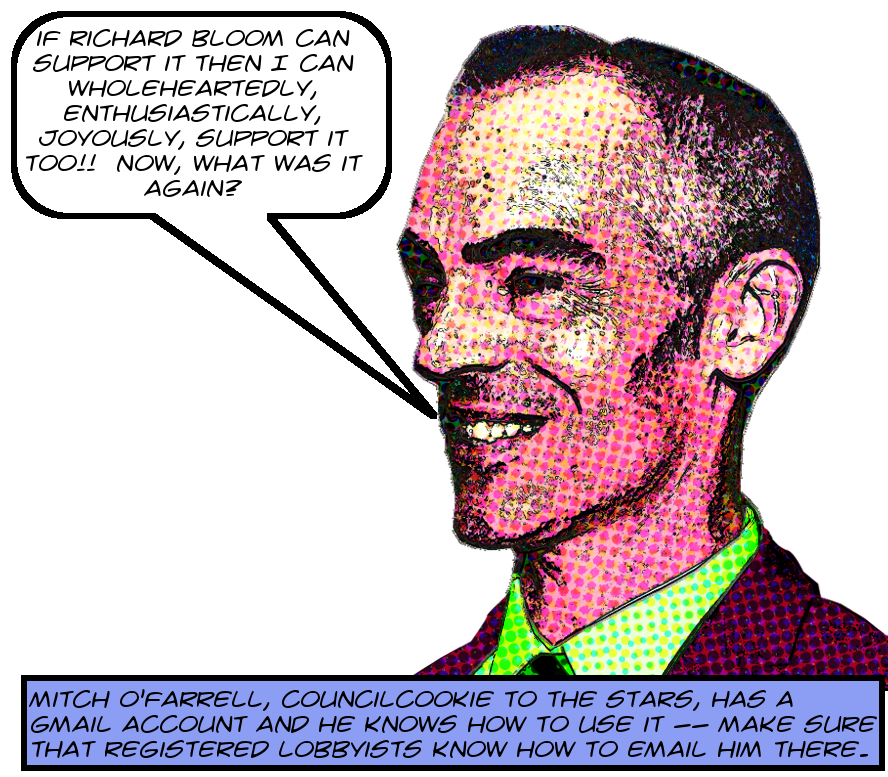 OK, remember that our friends over at the Hollywood Sunshine Coalition discovered recently that CD13 repster Mitch O’Freaking Farrell has a top secret Gmail account that he uses to conduct City business? And remember how they sent CD13 a CPRA request asking for all public records in this account? And remember how Mitch O’Farrell’s fairly sinister chief of staff, Jeanne Min, was all like no way, friend, go pound sand? And then the brave and untrammeled souls over at the Coalition were all like, way, friend, if sand is to be pounded, you pound it!

Well, apparently some part of that message got through to Ms. Jeanne Min, cause evidently yesterday CD13 supplied HSC with a bunch of emails! And they passed them to us!1 And in the typically passive aggressive attitude that the City of LA adopts when complying with CPRA requests the PDFs had pages randomly rotated, interspersed with random blank pages, and so on, making them fairly unreadable. But I’m a whiz with PDFs and I cleaned them all up and published them on Archive.Org right here so you can read all 101 pages of them. Here’s a link straight through to the clean PDF and the original files are also available so you can compare if you’re interested.

And there is a ton of good stuff even just in this small selection. I aim to write at least three more posts highlighting various aspects of it, and I’m sure if you read through it you’ll find gems that completely escaped my notice. The episode you’re reading now is particularly timely, given that it has to do with today’s contentious vote on AirBnB regulation. Did you have an opinion on that? Did you communicate your opinion to your Council rep? Well, you didn’t get to communicate it as well as some people did!

It seems that on April 27, 2018 James W. Litz, then working for the sinister-sounding Beverly Hills/Greater Los Angeles Association of Realtors, and himself a lobbyist registered with the City Ethics Commission, sent an email to the usual list of public-facing Councilfolk email addresses ending with lacity.org telling all of them that his employer, the BHGLAAR, supported the AirBnB regulations proposed in CF 14-1635-S2 as long as they didn’t let people living in rent stabilized units rent out their homes and let building owners forbid their tenants from participating if they wanted to. This email is transcribed after the break.

And then, certainly because as you yourself have no doubt suspected, nobody actually reads a damn thing that comes in to those “councilmember.wtf@lacity.org” addresses, less than two minutes later James W. Litz turned around and forwarded the email to Mitch O’Farrell at the secret Gmail address, which is to say mitchof13@gmail.com, with a personal note:
END_OF_DOCUMENT_TOKEN_TO_BE_REPLACED 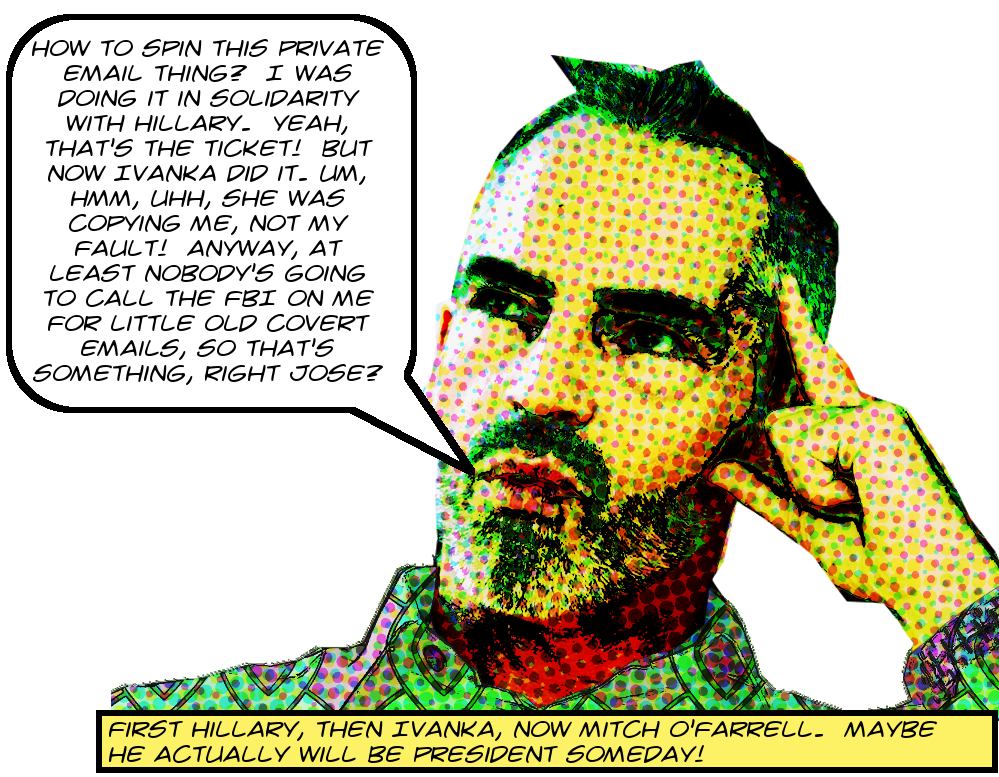 In the last few years a number of public officials have been criticized extensively1 for using privately controlled email accounts to conduct public business. Hillary Clinton was famously investigated by the FBI for this. And just yesterday it was revealed that Ivanka Trump has done the same thing. Thus we were fascinated to learn recently that CD13’s own Mitch O’Farrell also uses a privately owned Gmail account, mitchof13@gmail.com, to conduct City business and, doubtless, to evade scrutiny.

This was discovered recently by our friends at the Hollywood Sunshine Coalition, who passed us the material on which this post is based. And this revelation settles a big mystery. As you know, I personally have obtained many thousands of pages of emails from CD13 on any number of subjects, and there are never any at all from O’Farrell himself. Previously I had thought that either Dan Halden, who handled most of my requests, was purposely omitting emails from his boss or else that O’Farrell was communicating in ways that didn’t leave traces, like phone calls. Now it seems likely that he has been evading scrutiny by using this secret email address.

The HSC has been making public records act requests for emails from this account. There are two ways to approach this. The first, and so far the only successful, way is to find correspondents who are subject to the CPRA and ask them for emails involving O’Farrell’s secret email address. This led to request number 18-2976 on the City’s newish CPRA platform, which is called Nextrequest.2 For some reason the City has made the request page available for public view but not the records provided. They turned over 21 highly duplicative PDF pages of emails between O’Farrell and various officers and, interestingly, some members of the Hollywood Studio District Neighborhood Council. You can read these 21 pages here. Apparently the HSC has other such requests pending.

But the HSC’s other strategy has turned to be much more interesting, even though it hasn’t gotten them any actual records yet. It’s based on last year’s absolutely monumental California Supreme Court opinion in City of San Jose v. Superior Court, which found that the emails and text messages of public officials are subject to the CPRA even if they are held in private accounts.

Based on this principle, on November 7 the HSC sent this CPRA request to CD13, asking for all emails held in the account from July 1, 2013 through the present.3 And yesterday, probably unsurprisingly, O’Farrell’s chief of staff, Jeanne Min, replied with the usual mush-mouthed nonsense, the TL;DR of which is “fuck you no records.” The HSC responded pretty scathingly, and then responded again for good measure. They’ve promised to keep me in the loop with respect to further developments. After the break you can find transcriptions of most of these emails along with some technical discussion of the CPRA issues implicated.

Meanwhile I’m told by those who ought to know that the HSC will not drop this request and that they are prepared to litigate if necessary. We’ll see what happens, I guess. Whatever happens, it’s clear that the public interest is very much against allowing Mitch O’Farrell to get away with maintaining this secret side channel for communicating with his favored few and with secreting emails away from public scrutiny and the City’s record retention policies.
END_OF_DOCUMENT_TOKEN_TO_BE_REPLACED