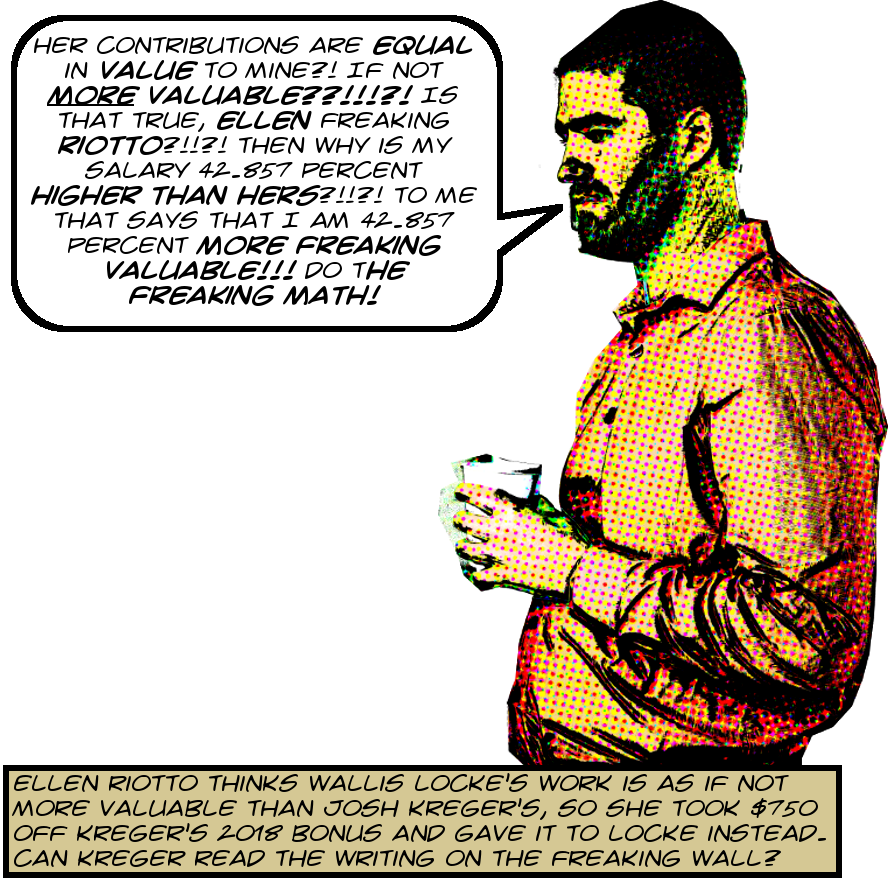 I’ve written before about the South Park BID’s weirdo insistence that its staff members keep their salaries secret even though it’s essentially impossible to do this for publicly funded government agencies like business improvement districts. This information is just all a matter of public record, so we know, e.g., that South Park BID real estate director Josh Kreger makes $100,000 per year, communications director Wallace Locke makes $70,000, operations director Lulu Woldemariam makes $65,000 per year, and executive director Ellen Salome Riotto makes $131,250.

And they also get bonuses! I don’t know what kind of job you have, but I’ve never had a job where they just gave bonuses to everyone. It’s some kind of white collar elite psychodrama that would probably ruin everyone’s time at the Christmas party if they knew what their colleagues were getting. But it turns out that bonuses are all public record too! I am, therefore, pleased to be able to reveal what all these South Park BIDdies got all bonused up with for 2018!

But first there is a crucial backstory! Having to do with BID communications boss Wallis Locke! Who started with the BID in November 2016. And couldn’t be bothered to even show up for work on time! Or respond to emails on time! Or make her freaking green carpet deadlines, whatever the freaking heck those are! You can read all about it right here!

But then her kindly but stern boss lady Ellen Salome Riotto had a little talk with her in December 2017! And she told her to listen up! And fly right! And other cliches like that! Or there wasn’t gonna be a next time! She “made it clear that this would be the very last of this type of conversation, and if her work ethic and attitude is not consistently improved, it’s over.” And it seems that by April 2018 Riotto’s shock treatment had worked! Ellen Riotto told the Board in an email that “she stepped up her game in ways that I frankly didn’t think she was capable of.”

Which brings us up to December 2018, when Ellen Riotto sent an email to BIDdie Warbucks Bob Buente discussing year-end bonuses for the staff. Which evidently, not that I would know, are supposed to be 5% of salary. So that, based on the numbers above, Kreger should have gotten $5,000 and Locke $3,500. But, says Riotto to Buente:

WL’s salary is still lower than where I’d like her to be, based on the competitive landscape in the industry and her specific contributions to the BID. Her bonus should be calculated on her current salary, not on gross annual earnings. That would put her at $3,500. However, Wallis’ contributions are equal in value (if not more valuable) than Josh’s, so my recommendation is to sum their 5%s ($3,500 for WL, $5,000 for Josh = $8,500) and split ($4,250).

And that’s what they did. Oh, ouch! That’s gotta hurt Josh Kreger, wouldn’t you think? His bonus is reduced by 15% and that money passed to Locke, who earns 30% less than him, but his boss thinks her contributions are “equal in value (if not more valuable) than” his. Ouch, ouch, ouch!

If he has any self-respect he’ll quit the damn job after reading about what his boss thinks of him. Stay tuned! And turn the page for a complete transcription of every last detail of Ellen Salome Riotto’s December 2017 email about what a crappy job Wallis Locke had been doing!
END_OF_DOCUMENT_TOKEN_TO_BE_REPLACED