This post is ultimately about an email conversation between Blair Besten and Hollywood Superlawyer Jeffrey Charles Briggs about a public records request that renowned podcaster Carrie Poppy submitted to Besten’s BID in May 2020. It’s a fascinating look behind the scenes as a CPRA request is filled. If you want to skip my nonsense and get straight to the goods, here’s a link to the email itself, and here are a bunch of emails between Poppy and Briggs about her request.

Like I said up there in the title, in March 2020 Carrie Poppy sent a request for public records to Blair Besten, the half-pint Norma Desmond of the Historic Core BID, the third weirdest of the minor Downtown BIDs. Poppy’s request included the following sentence: If any of these records are held by the BID in electronic form I will need to inspect them and potentially receive copies in electronic form.”

And because apparently she’s always thinking of me, Besten immediately fired off a desperate email to self-proclaimed Hollywood Superlawyer Jeffrey Charles Briggs which contained a plaintive cri de coeur: “This sounds like an [Kohlhaas]esque request. ‘Electronic Form’ as they are being held – you know? Maybe?” And Briggs, always voluble, rarely sensible, had something to say about Poppy’s request as well.

Writing in all caps like the serial killer he never had the nerve to become Briggs had this clueless comment: I DON’T UNDERSTAND THIS UNLESS SHE THINKS WE WOULD CHARGE HER FOR A THUMB DRIVE OR WHATEVER; WE CAN JUST SEND PDF’S OR THE EMAILS THEMSELVES IF THERE ARE ANY, BY EMAIL. WE CAN FIGURE OUT HOW TO TRANSMIT WHEN WE KNOW WHAT WE HAVE.”

Which actually raises a pretty interesting question. I mean, I don’t see why Briggs thinks that what Poppy says implies she thinks they’d charge her for a USB drive, but given that he does think that, it’s pretty clear why Poppy might think it.1 After all, Blair Besten is famous for attempting to charge people for stuff that the CPRA specifically forbids her from charging. Just look!

Here she is in 2017 telling me that I would have to pay $3.50 per “flash drive.” At that time, by the way, she was heavily under the influence of Carol Humiston, the world’s angriest CPRA attorney, who famously (and illegally) advised her clients the South Park BID, to stop using Dropbox to transfer files, to only use USB drives, to charge me for them, and to buy the smallest ones available so I’d have to pay more for them. But that’s history!2

Briggs was apparently also worried about whether Poppy and I were linked somehow. So he did a little poking around, a little investigation, before he responded on May 13, 2020 to Besten’s psychically damaged comment. He talked to other BIDs about Poppy’s request and came to the following conclusion: “Everyone asks for electronic versions these days. She has asked these questions of other BIDs, and we do not think she is directly connected to [Kohlhaas].”

Briggs has been obsessed with me for a long time, to the point of mania, not even soothed his recent move to East Jesus, Ventura County, so he didn’t stop his investigations there. On May 21, 2020 he emailed Besten again, this time reassuring her that “…from other sources we still think there is no direct connection to [Kohlhaas].”

So that’s that story. Full, as usual, of a lot of sound, a little too much fury, and signifying not one damn thing other than that I am pleased to have received a copy of this email exchange between Besten and Briggs about Poppy’s request. Most of what’s in there is of narrow interest, except possibly to Carrie Poppy and anyone else who wants to understand what goes on behind the scenes of Blair Besten’s BID when she receives a CPRA request.

In addition to their paranoid ravings about me there’s a ton of discussion from Briggs about how to interpret the various sections of Poppy’s request, some characteristically idiotic remarks from Besten, and so on. It might be worth your time to take a look, and there are images below. And that, as they say, is enough for today! 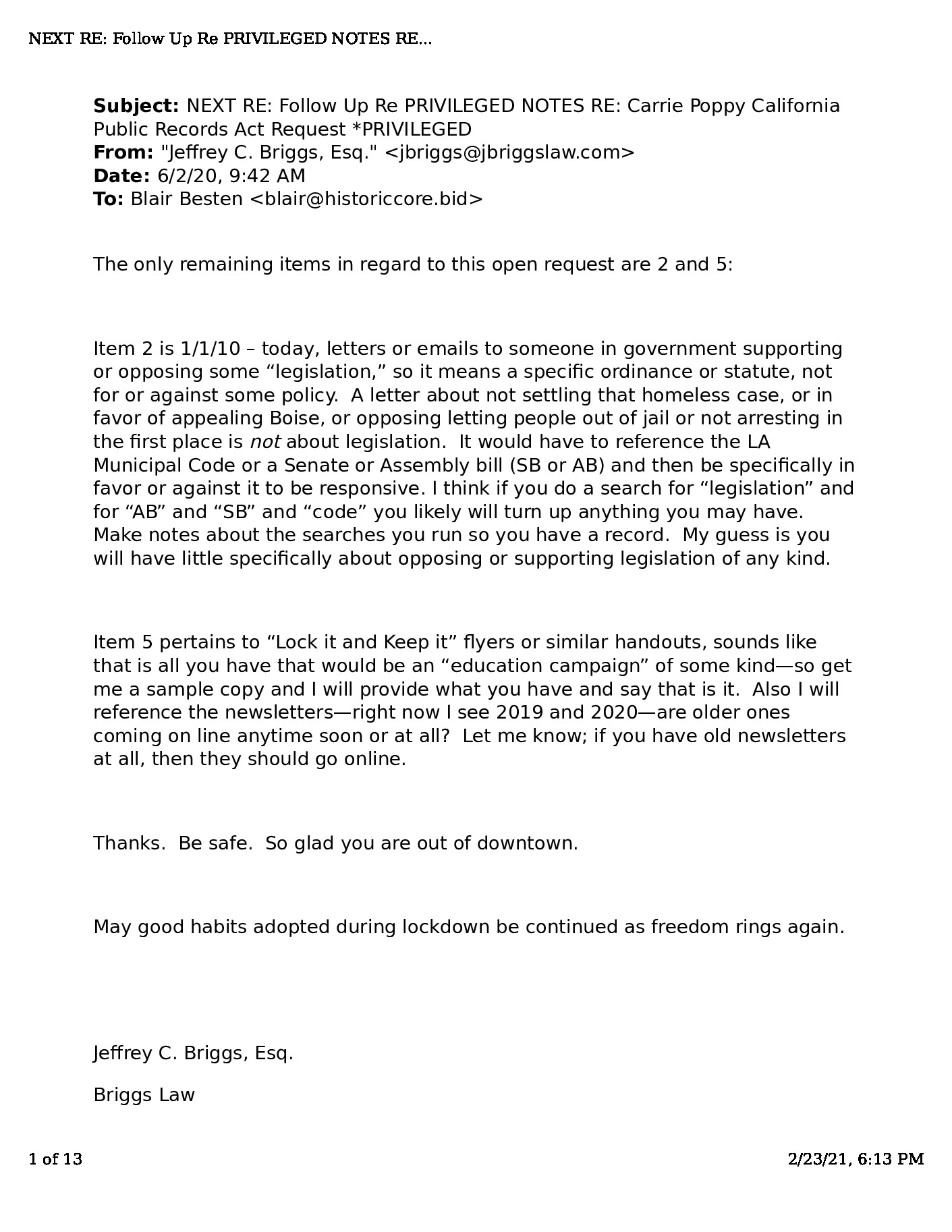 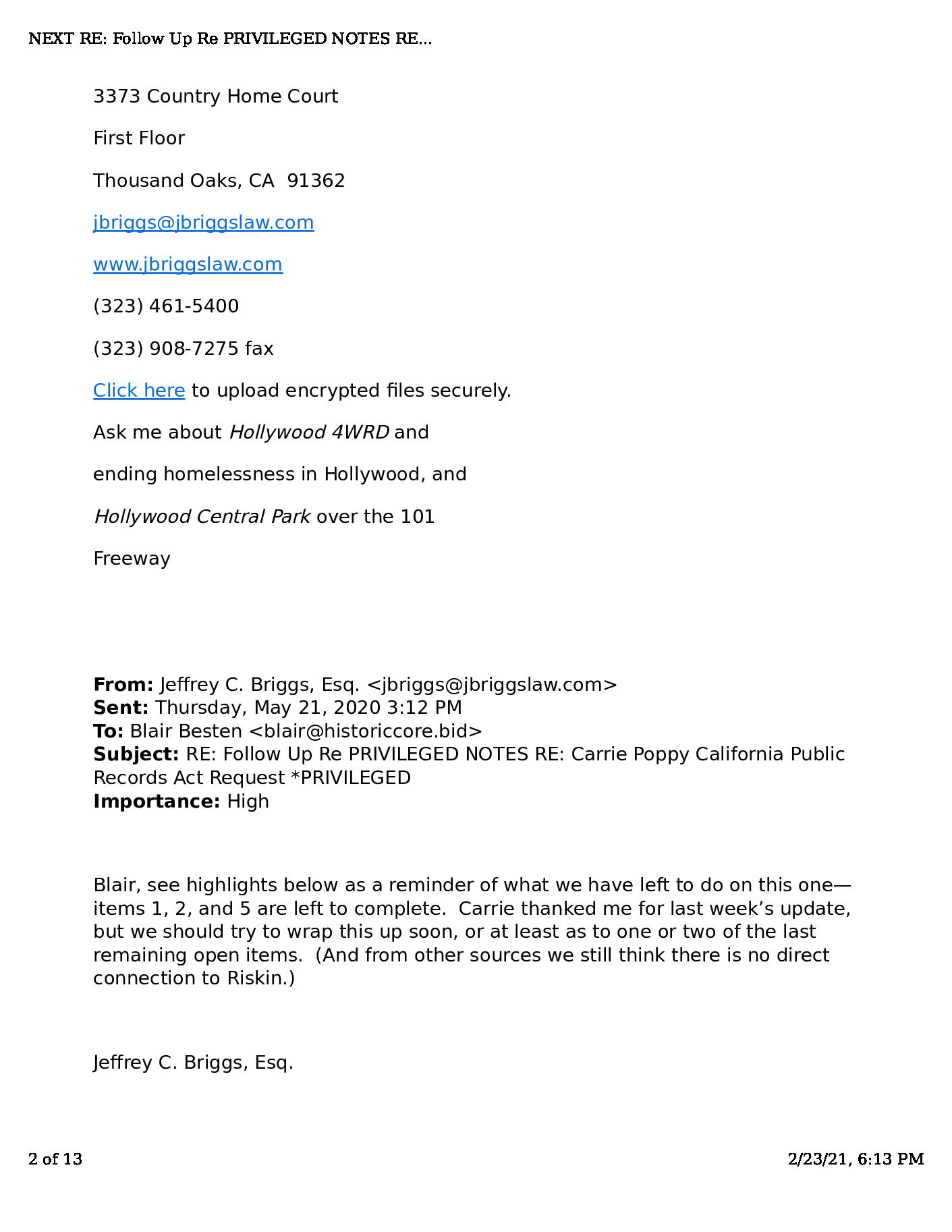 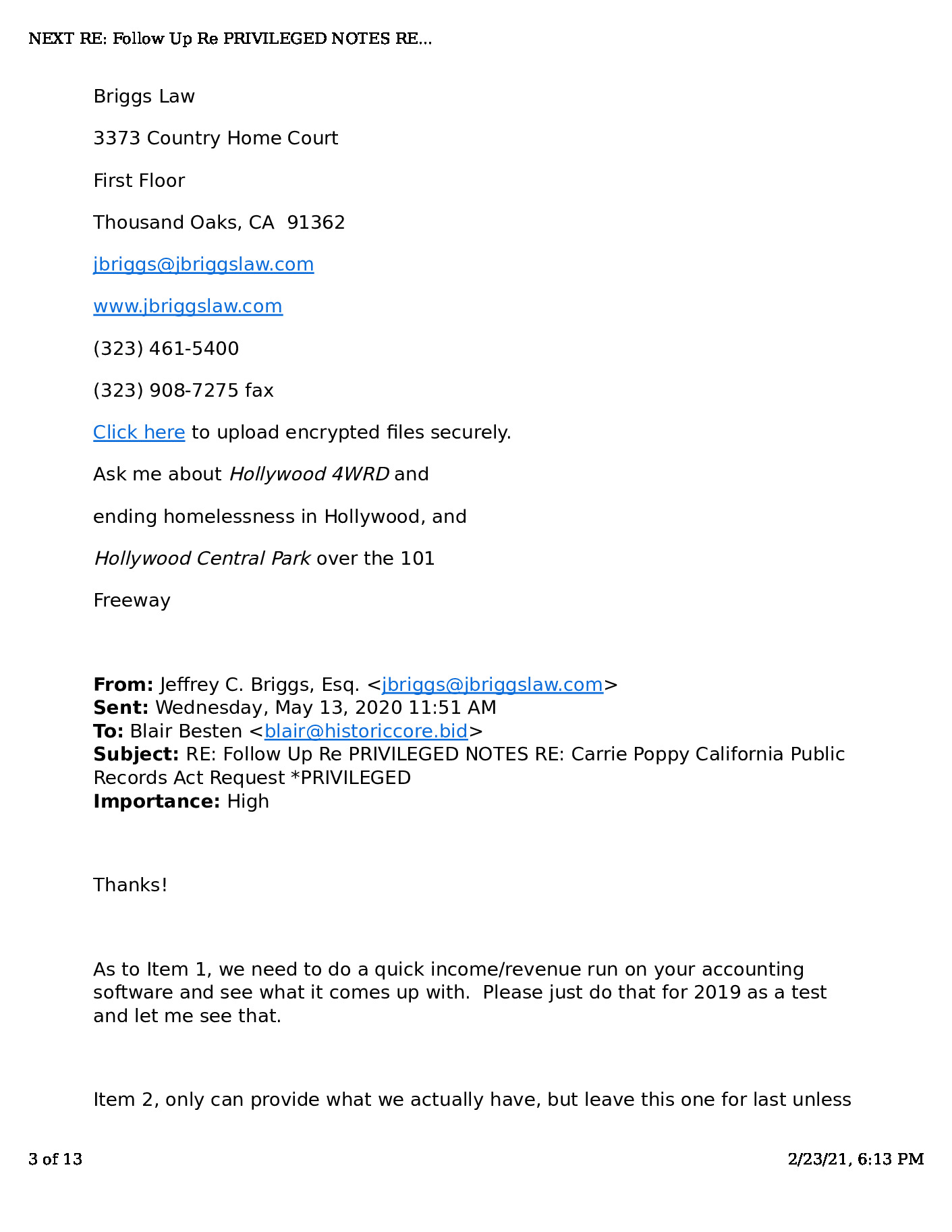 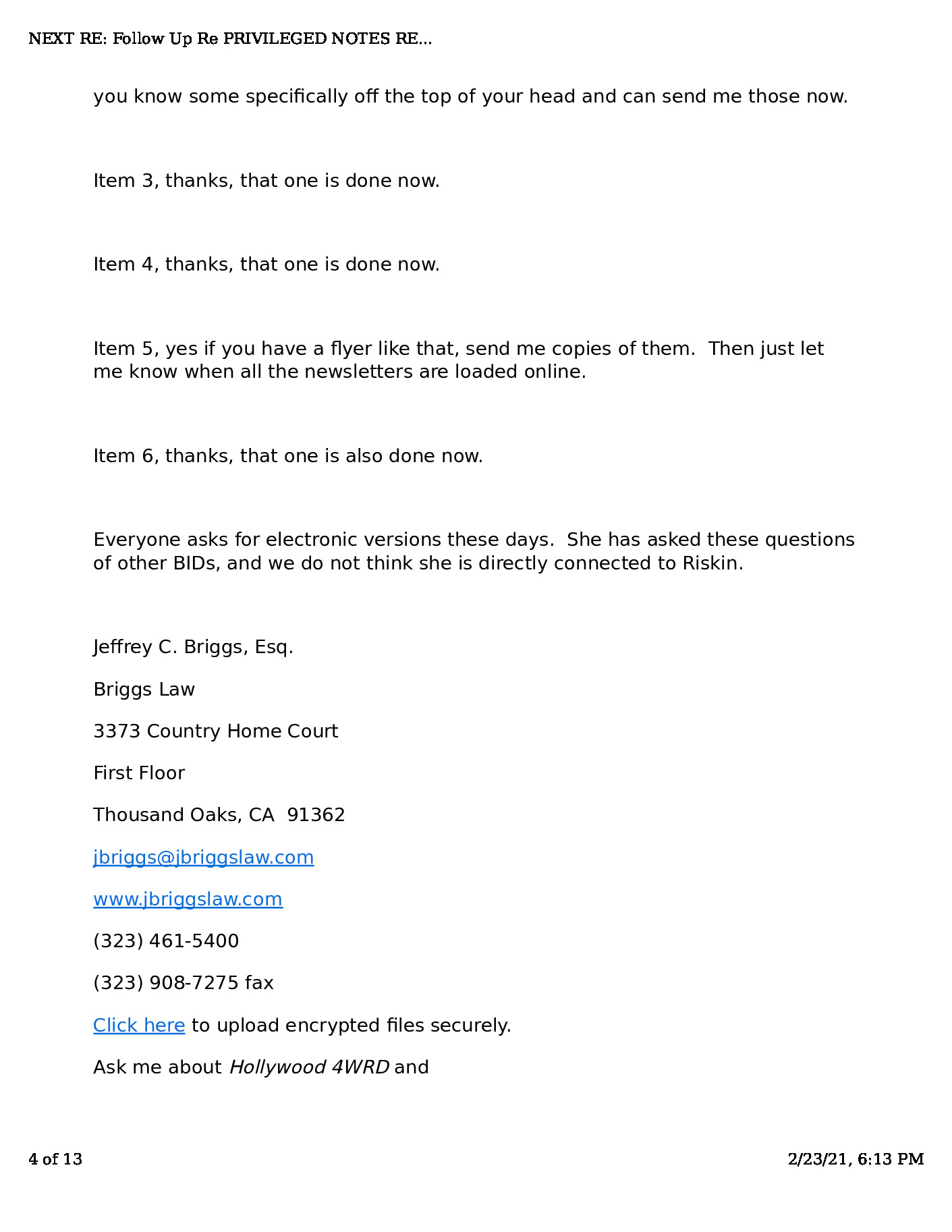 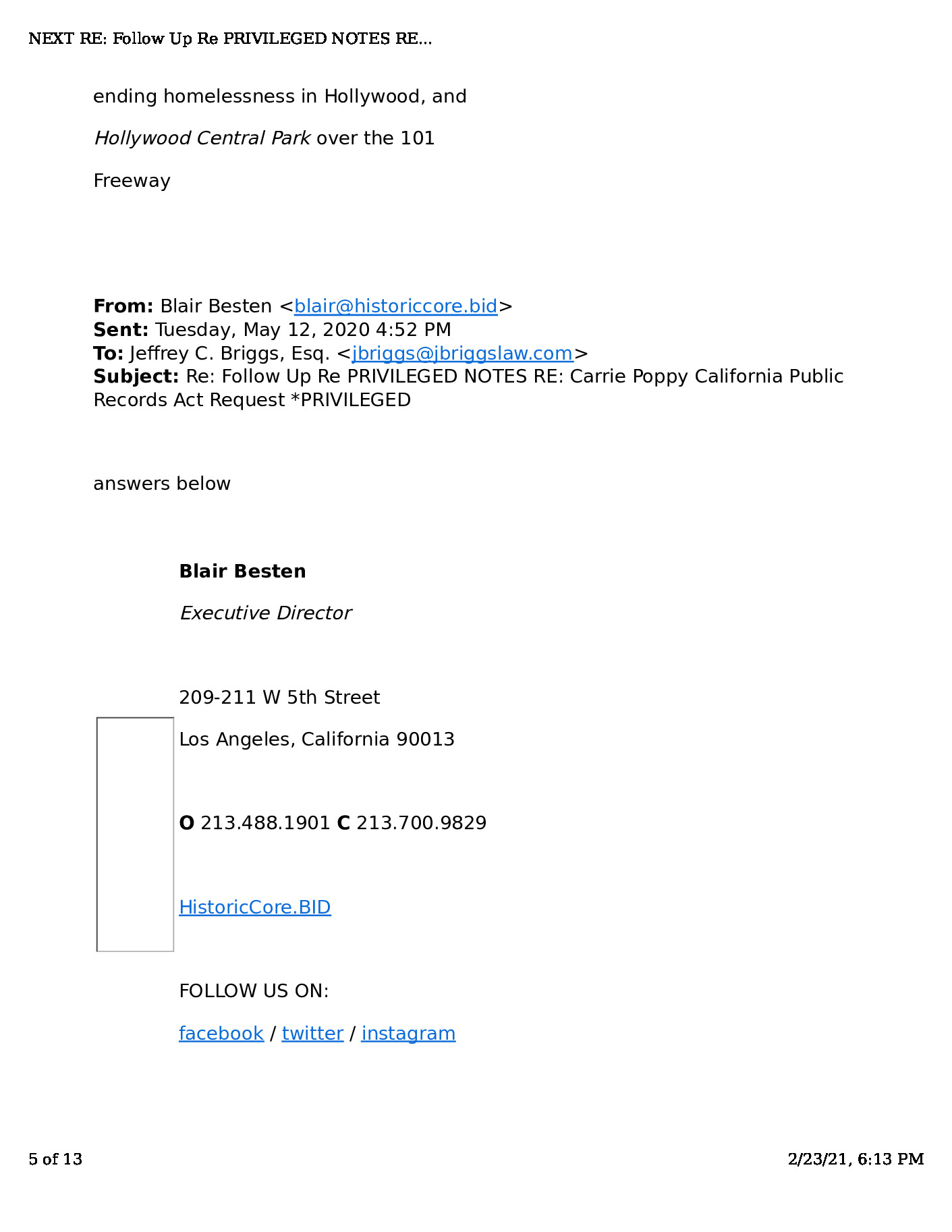 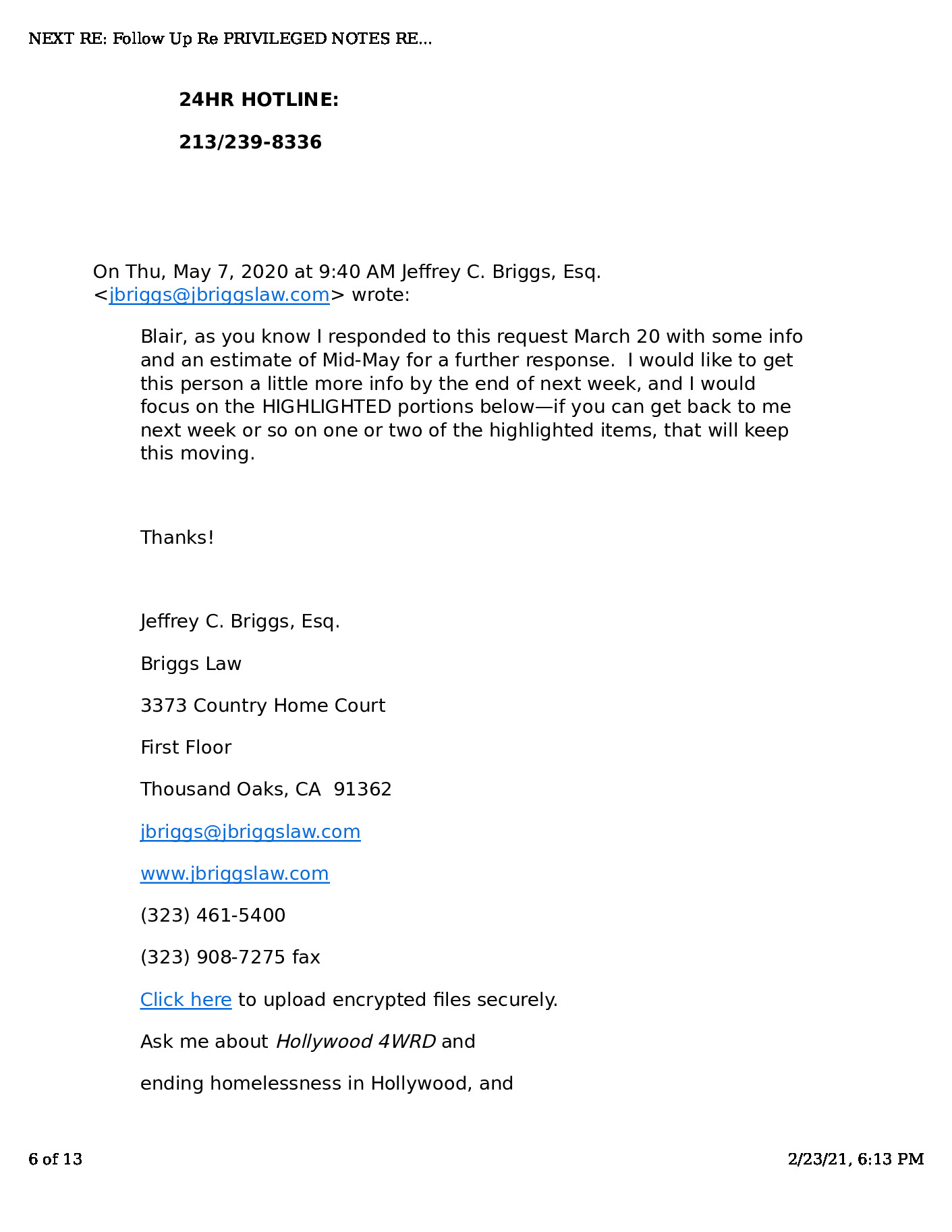 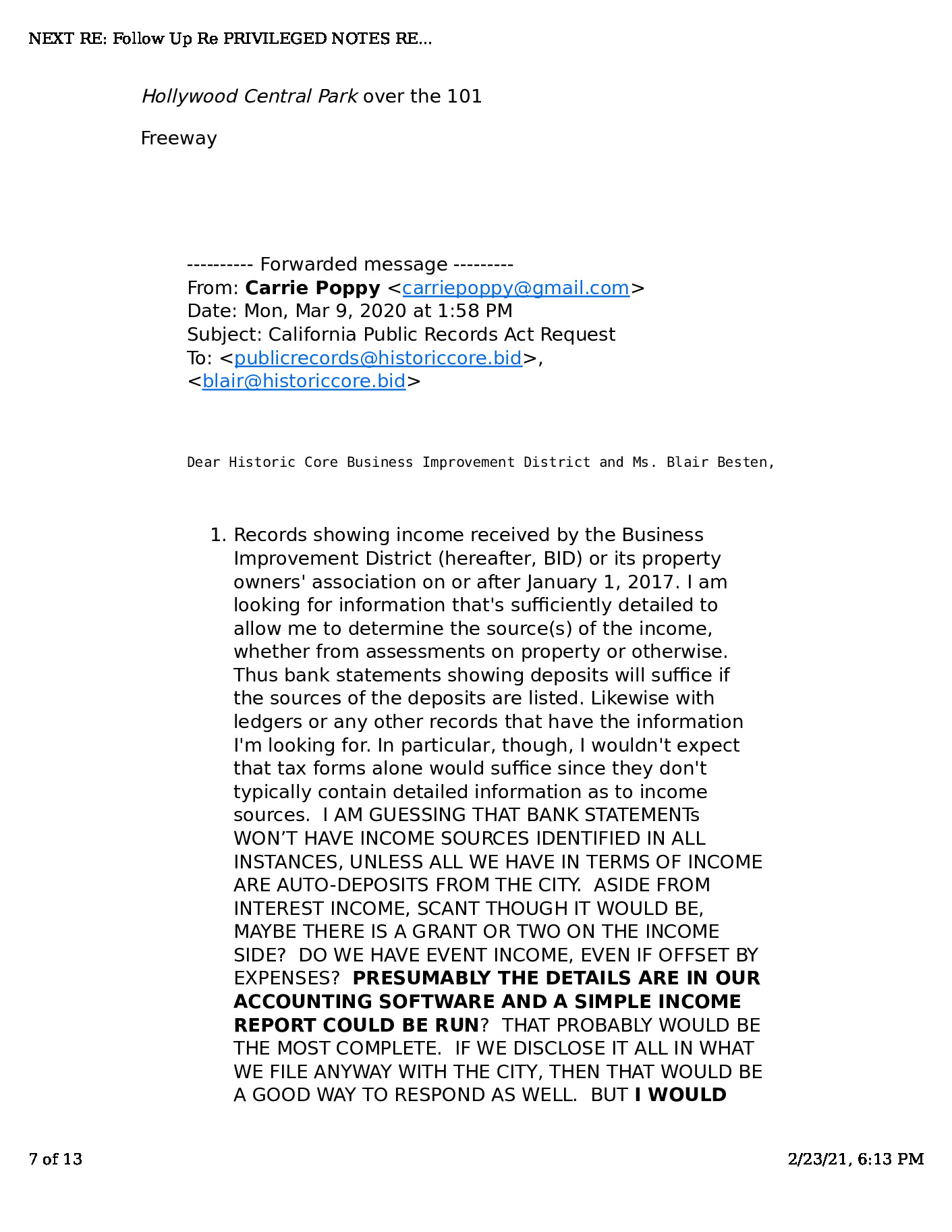 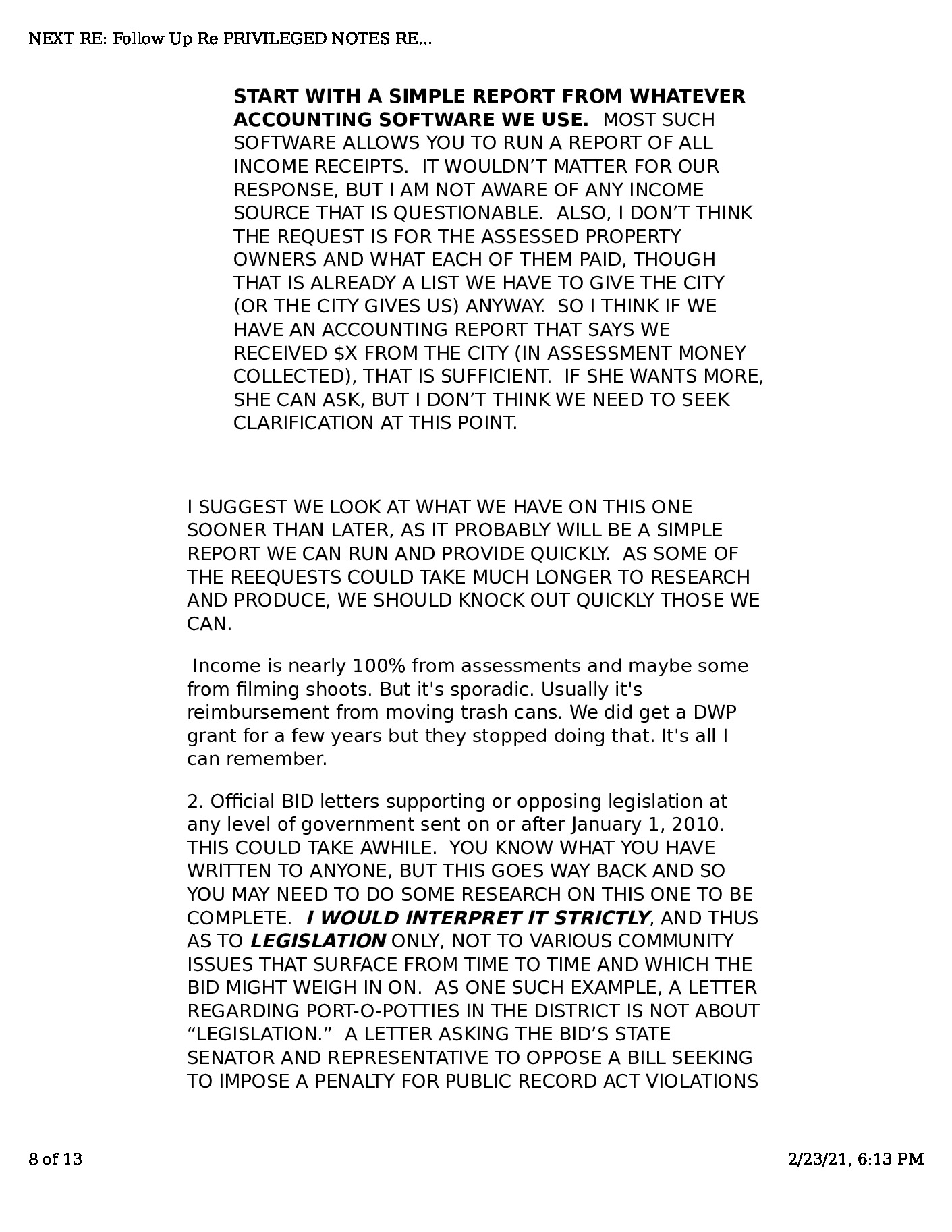 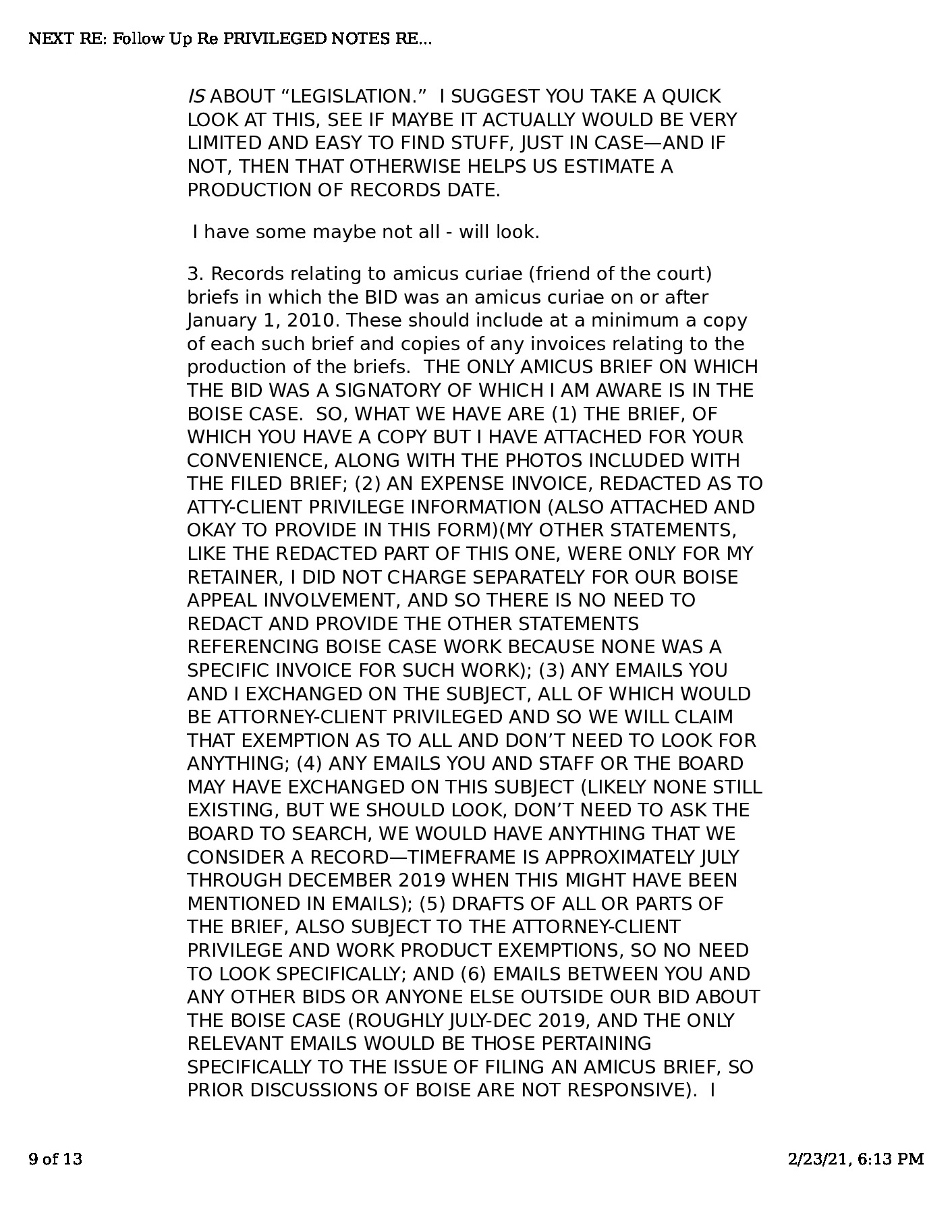 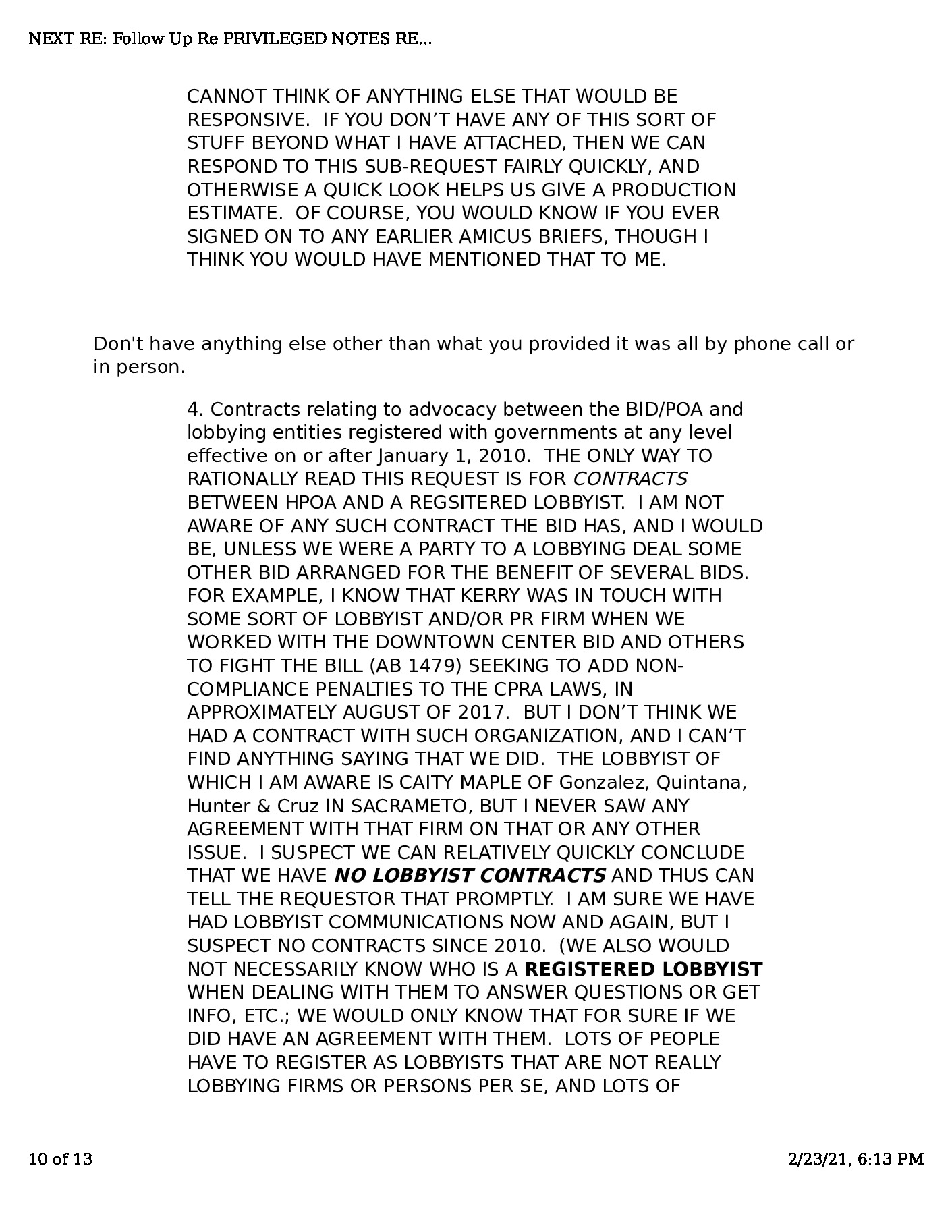 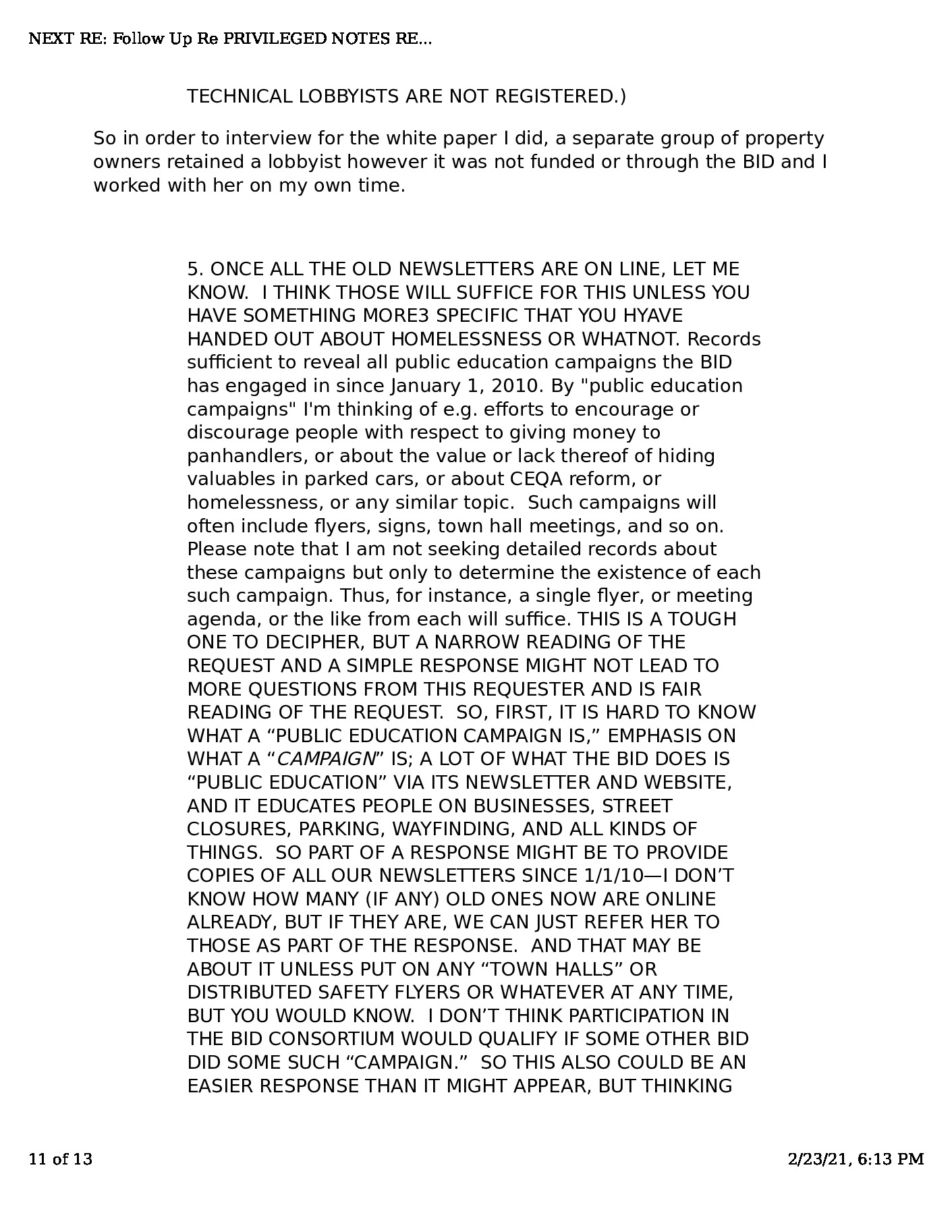 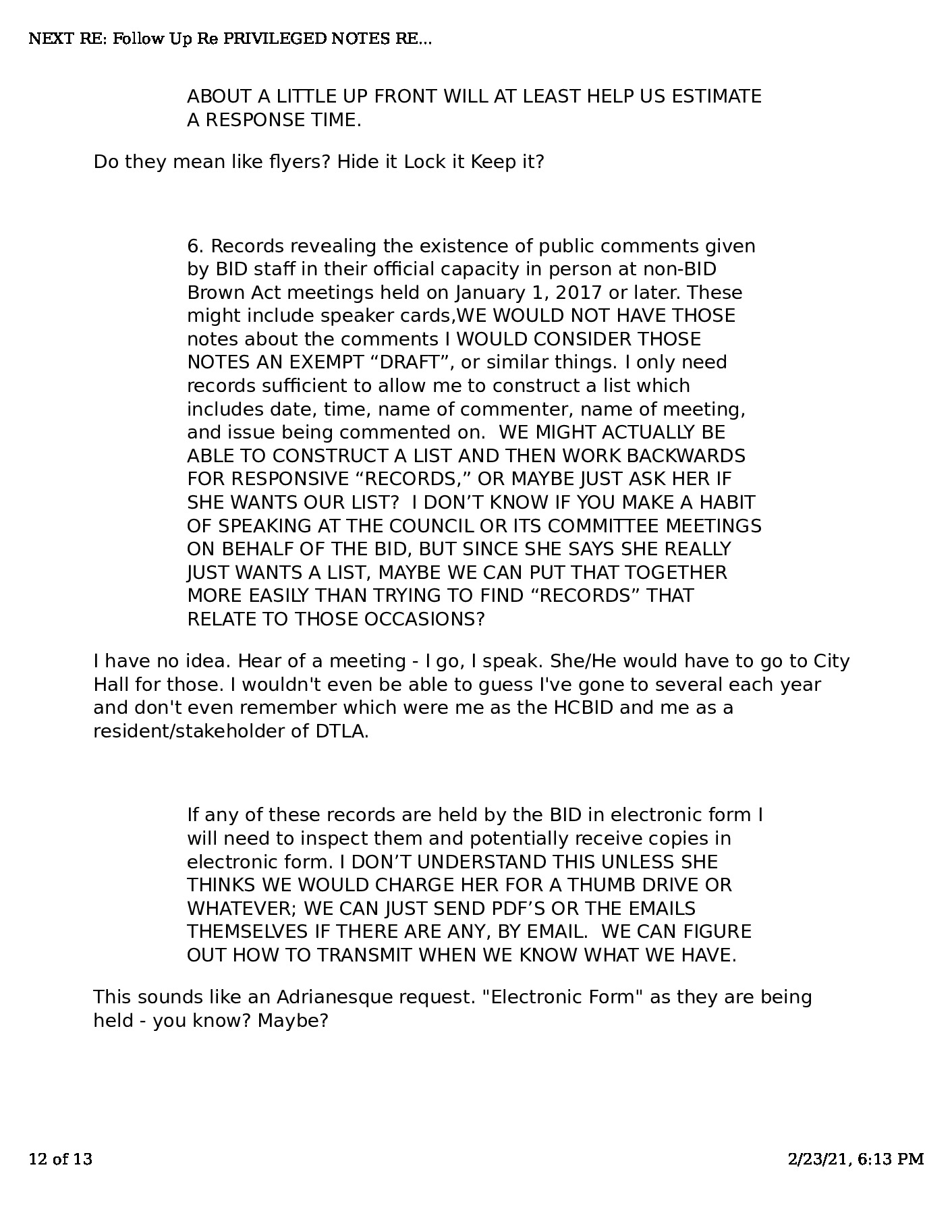 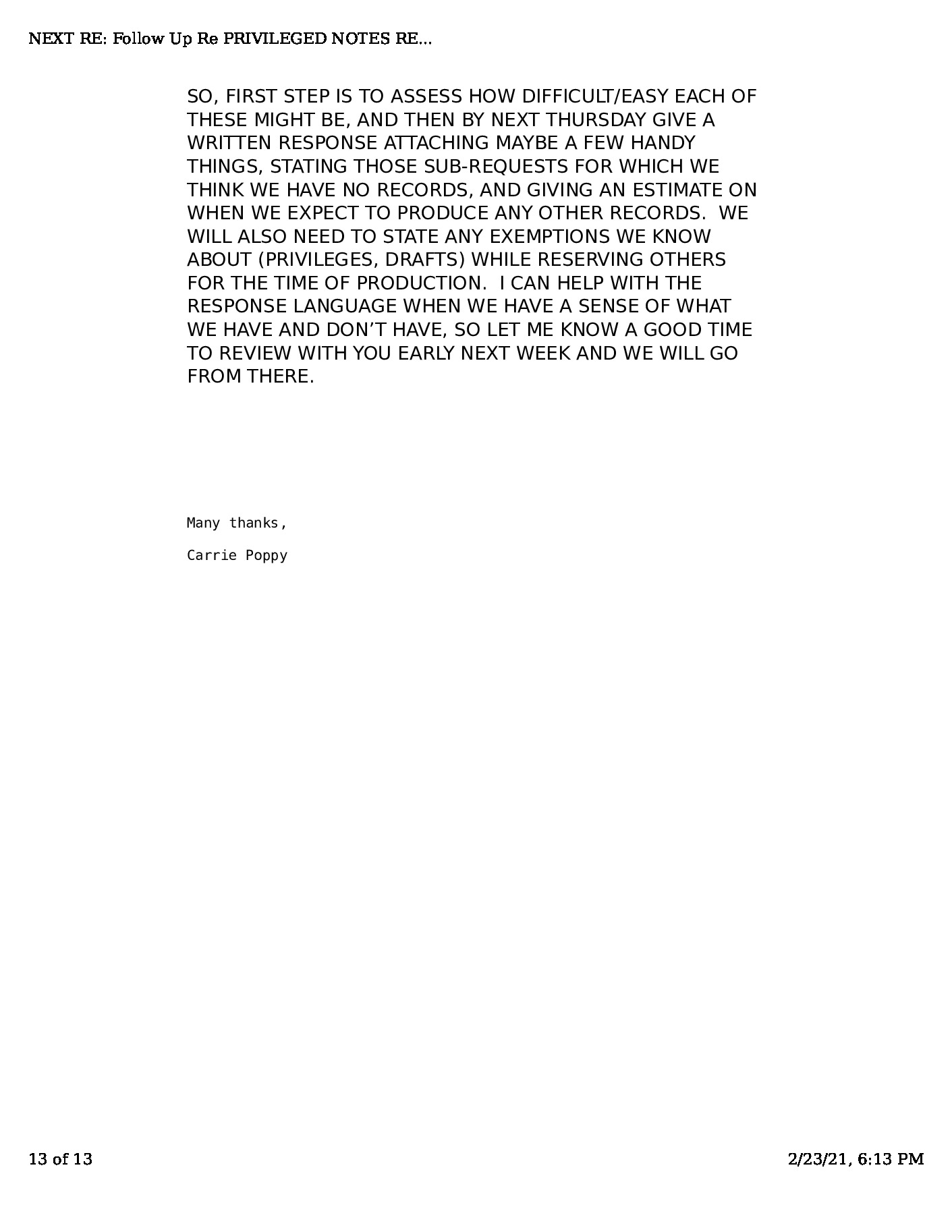 2 thoughts on “In March 2020 Apparently Carrie Poppy Asked The Historic Core BID For Some Public Records — Leading Batty Little Fusspot Blair Besten To Assume It Was Actually Me — And Therefore To Flip Her Already Fairly Unstable Wig — And Write To Self-Proclaimed Hollywood Superlawyer Jeffrey Charles Briggs — THIS REQUEST SEEMS KOHLHAASESQUE!!!! — Prompting Briggs To Interrogate A Bunch Of Other BIDs While Investigating The Most Pressing Question Of Our Time — Is Carrie Poppy Somehow Associated With Kohlhaas??!?!!?! — His Conclusion? — She Is Not Associated With Me — And Jeffrey Charles Briggs Has Never Known Himself To Be Wrong About Anything — So I Guess We Have To Believe Him! — Not Least Because He Writes In All Caps Like A Serial Killer”