This post is ultimately about this confidential Major Case Briefing report from LAPD detectives about LAPD Revolver and Athletic Club manager Archie Duenas stealing 40 guns and illegally selling them to various cops. If you don’t feel like reading my nonsense, just take a look at the damn report! It’s confidential! And has some info that’s not in the newspapers! And the fact that LAPD doesn’t want you to see it is enough of a reason to read it! Now!

In 2019 the Los Angeles Police Department severely curtailed its putatively proactive policing practice of stopping and searching random cars driven by black people in South Central Los Angeles after the Los Angeles Times published a story revealing, to no one’s surprise, that the whole program was deeply, irredeemably racist. And even the cops understand that the practice didn’t stop crime:

LAPD Chief Michel Moore told The Times that Metro’s vehicle stops have not proven effective, netting about one arrest for every 100 cars stopped, while coming at a tremendous cost to innocent drivers who felt they were being racially profiled.

Obviously Moore’s implication, that the effectiveness of the program is measured by the number of arrests, is a deliberate lie. Terrorism rather than arrests was and is the point, and by that measure the program was, is, and will continue to be extremely effective.1 And despite Moore’s statement at the time, well, just yesterday he reversed course and ordered the famously crime-doing2 Metro Division to resume random vehicle stops in South Central. And this time Moore seems to be pushing gun confiscation rates as an effectiveness metric:

As of Friday, the Metro officers had conducted 74 stops, resulting in 50 arrests and 38 guns recovered — a vastly greater rate of arrests and seizures than during stops in the past, according to LAPD data. In 2019, officers made 15,802 stops, leading to about 1,800 arrests and the recovery of 200 guns, the LAPD said.

See how much higher their arrest rate per stop is now? That certainly supports the claim that terrorism was the purpose the first time around. If they know how to make arrests in 68% of their stops and confiscate more than one gun per two stops their 2019 rates of 11.3% of stops resulting in an arrest and about one gun per eight stops must have been purposeful. And if arrests are a measure of effectiveness now, why didn’t Moore notice the low number of arrests on his own before?

But whatever. No one reads this blog for my editorializing!3 Let’s get to the damn point! Last year Archie Duenas, manager at the LAPD’s private revolver and gun club, stole a bunch of guns from work and sold them illegally to various police officers. Not all have been recovered and as far as I can see none of the cops who bought the stolen guns have been punished in any way. And here is a confidential LAPD report on the case from the investigating detectives! It’s transcribed below, and there are images of the pages.

The most interesting part of this story, and the part that makes it relevant to LAPD’s resumption of its racist stop/search policy in South Central, is the complete, utter, and total lack of arrests of the cops who illegally bought guns from Duenas. Obviously these cops knew the guns were illegal, and yet they all told the investigators some variation of the same story: As Duenas was a store manager, the deputy was confident Duenas would complete the remaining documentation.4

These cops who bought these guns broke the law and were in possession of illegal guns, precisely like however many of the 50 people the Metro Division arrested in South Central since resuming their racist stop/search process were in possession of the 38 illegal guns confiscated. And yet not only is the LAPD not interested in arresting them, but the ATF and the LA County DA’s Justice System Integrity Division, both of which are working on the investigation as well, have no plans to arrest the cops:

Duenas was the primary target of the investigation at this juncture. The potential prosecution of law enforcement personnel purchasing firearms from Duenas will be reviewed on an ongoing basis. ATF and JSID indicated this would depend largely on evidence, if any, that they knowingly purchased stolen firearms, knowingly collaborated with Duenas in some way, or received extreme discounts that would have alerted them to the fact that Duenas’ activities were illegal.

The point is the double standard. If recovering guns without arresting the criminals who own them is enough to ensure safety then why is Moore touting the number of arrests his crime-doing Metro Division has made since he allowed them to resume the racist random stops policy? If arrests are necessary, why the universally agreed-on refusal to arrest the cops who illegally bought guns from Duenas?5

But cops lie. They lie all the time. It’s pretty likely that Moore’s lying, either by omission or by invention, about the reason he ordered the Metro Division back into South Central. He was widely criticized by his subordinates last year for what they saw as pandering to Black Lives Matter activists and what they see as their radical supporters in the City government. Maybe he’s letting Metro start terrorizing South Central again as a down payment on their continued loyalty.

Or maybe something entirely different, something unguessable from the outside. Whatever it is, though, the point is even the police don’t believe that arrests in addition to gun confiscation makes the City safer. If they even thought that they’d have handled the Duenas case very, very differently, eh?

Transcription of the confidential report:

Commercial Crimes Division was notified on February 28, 2020 that multiple firearms were missing from the LAPRAAC store located at 1880 Academy Drive, Los Angeles. CCD personnel immediately responded to the location, and spoke to LAPRAAC retail manager Debbie Rhoades. Rhoades stated that on Tuesday, February 25, 2020, she had learned that there was a discrepancy in their inventory tracking systems, and ordered a full physical inspection of all firearms on February 26 – 27, 2020. Unfortunately, this physical inspection revealed that there were 39 firearms unaccounted for. CCD detectives, with the assistance of the GND gun detail, were able to verify that these firearms had not been sold, properly disposed of, or returned to the appropriate manufacturers. Physical boxes associated with missing/stolen firearms were photographed, printed, and swabbed for DNA. The video of the interior of the LAPRAAC store was recovered and secured.

A review of LAPRAAC procedures and documents indicated the involvement of Assistant Manager Archie Duenas with multiple missing/stolen firearms; he was subsequently fired. LAPRAAC security measures were determined to be substandard, and this appears to have inadvertently facilitated Duenas’ efforts to steal multiple firearms without the immediate detection by other LAPRAAC personnel. During the investigation, Duenas spoke to CCD DII Mel Vergara via telephone, but all conversations had been evasive and cryptic, and he declined to be formally interviewed.

Duenas was found to be in possession of multiple miscellaneous items stolen from LAPRAAC, a 9mm pistol, an

illegally modified AR-15 style assault rifle, and a quantity of methamphetamine, and was arrested. The recovered weapons were not on LAPRAAC’s list of stolen firearms.

LAPRAAC initially reported 39 guns unaccounted for. Via records reconciliation and extensive auditing at the behest of investigators, that number was reduced to 32 missing/stolen guns. Of these, several turned up via DROS hits, while others were located via the forensic examination of LAPRAAC paperwork and other documents.

At this time, 20 firearms have been identified as having been sold by Duenas to the below individuals, and voluntarily surrendered to investigators. One additional firearm was recovered from a rear yard near Duenas’ residence.

An LASD Sheriff’s deputy was identified as a seller of a missing LAPRAAC firearm; he was cooperative and voluntarily gave two substantive statements to investigators. He indicated that he purchased 13 firearms at LAPRAAC with the assistance of Archie Duenas. Duenas asked for cash and Venmo payments, and in exchanged offered to discount the price by a relatively small amount (10-15%). Duenas completed some (but not all) documentation at the time of purchase. As Duenas was a store manager, the deputy was confident Duenas would complete the remaining documentation.

The deputy voluntarily surrendered 13 firearms, from LAPRAAC’s list, to investigators.

Further firearms were traced back to an LAPD employee. The employee was cooperative and gave a brief statement. The employee stated that he, too, purchased firearms at LAPRAAC from Archie Duenas, and that Duenas asked for cash, in exchange for a small discount, to pay for the firearms. Because Duenas was a manager, the employee was confident Duenas would complete any further documentation appropriately.

By examining LAPRAAC records, a second LAPD employee was determined to be in possession of several firearms, but declined to make a statement.

A third LAPD employee was identified as a seller of a firearm via a DROS hit. He, through his attorney, declined to give a statement to CCD detectives.

He voluntarily surrendered 1 firearm, from LAPRAAC’s list, to investigators.

On April 21, 2020, an elderly Huntington Park citizen observed an object resembling a firearm wrapped in plastic behind a shed in her back yard, and made contact with CCD detectives.

Detectives recovered 1 firearm, a Benelli M4 semi-automatic shotgun, from the back yard. They determined that this, too, was from LAPRAAC’s list.

Note: the residence is immediately adjacent to Duenas’ residence at 3720 Hope Street, in Huntington Park. Detectives noted that Duenas would have had immediate access to the area where the Benelli was concealed/recovered.

All told 32 firearms, were reported missing/stolen from LAPRAAC. At this time; 21 have been recovered, and 11 remain outstanding.

Duenas was the primary target of the investigation at this juncture. The potential prosecution of law enforcement personnel purchasing firearms from Duenas will be reviewed on an ongoing basis. ATF and JSID indicated this would depend largely on evidence, if any, that they knowingly purchased stolen firearms, knowingly collaborated with Duenas in some way, or received extreme discounts that would have alerted them to the fact that Duenas’ activities were illegal.

Both ATF and JSID agreed that the best strategy was to wait for the entire investigation to be completed against Duenas before any charges were filed. Duenas, who is out on bail, would be rearrested at that time. Any additional firearms recovered during the investigation may add to the charges Duenas ultimately faces; however, the diminishing likelihood of recovering all unaccounted for weapons should not unduly delay the reasonable conclusion of the investigation.

The strength of the evidence, as well as the potential sentence Duenas was likely to receive, would determine who ultimately prosecutes the case.

A follow up call with all parties would be initiated by CCD in two weeks.

A Grand Theft IR was completed

⬩ Ruben Crane, the general manager, and Debbie Rhoades, the retail operations manager, have both been
interviewed. Interviews of LAPRAAC employees have been completed

⬩ Serology, prints, and photos responded to appropriately gather evidence and document the circumstances
of the theft. No significant evidence was obtained via prints or DNA

⬩ All missing firearms have been vetted by the GND gun detail

⬩ The video footage of the LAPRAAC interior has been reviewed, but the equipment was semi-functional,
and the results did not reveal any footage of evidentiary value

Investigative steps remaining:
⬩ Examination of various paperwork in an attempt to track Duenas’ activity while employed at LAPRAAC 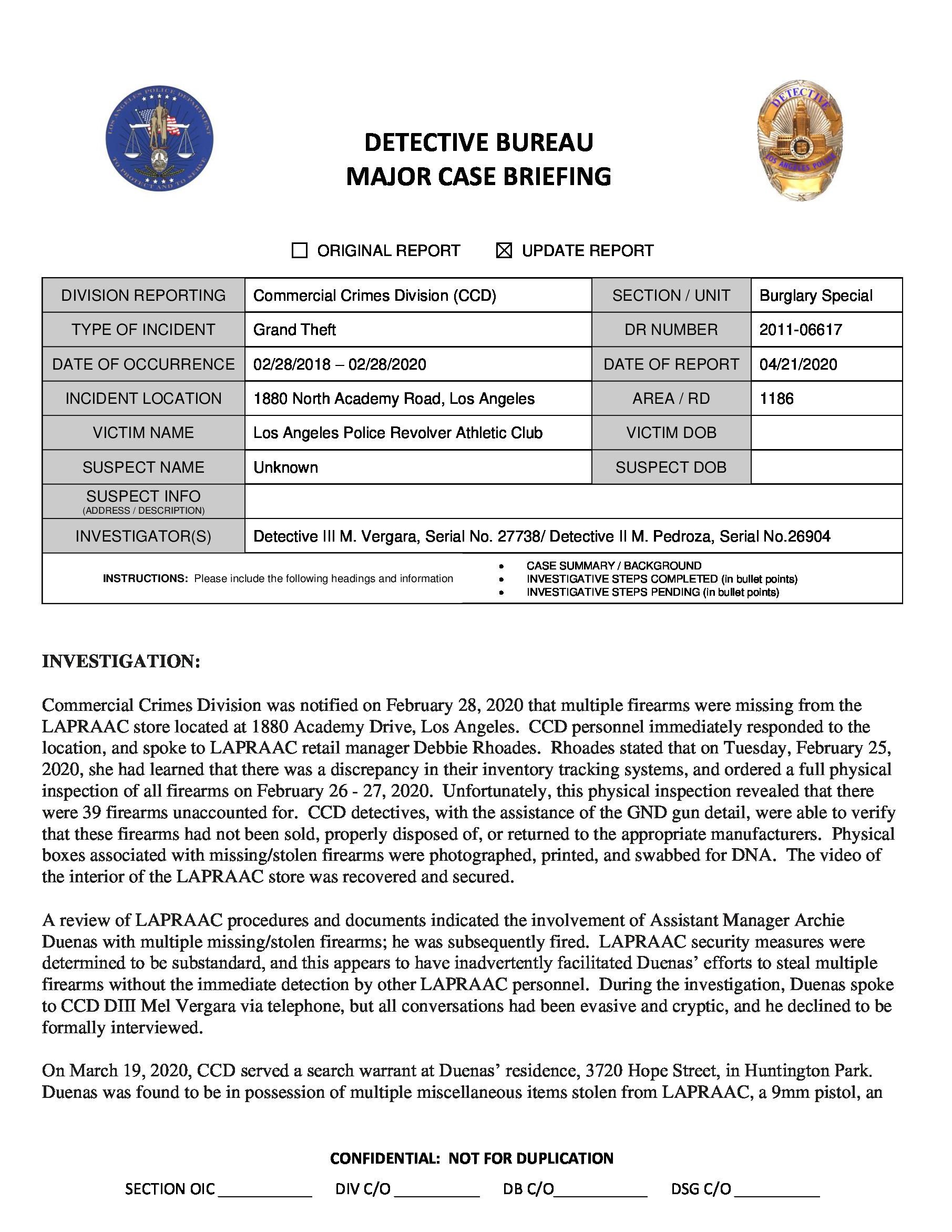 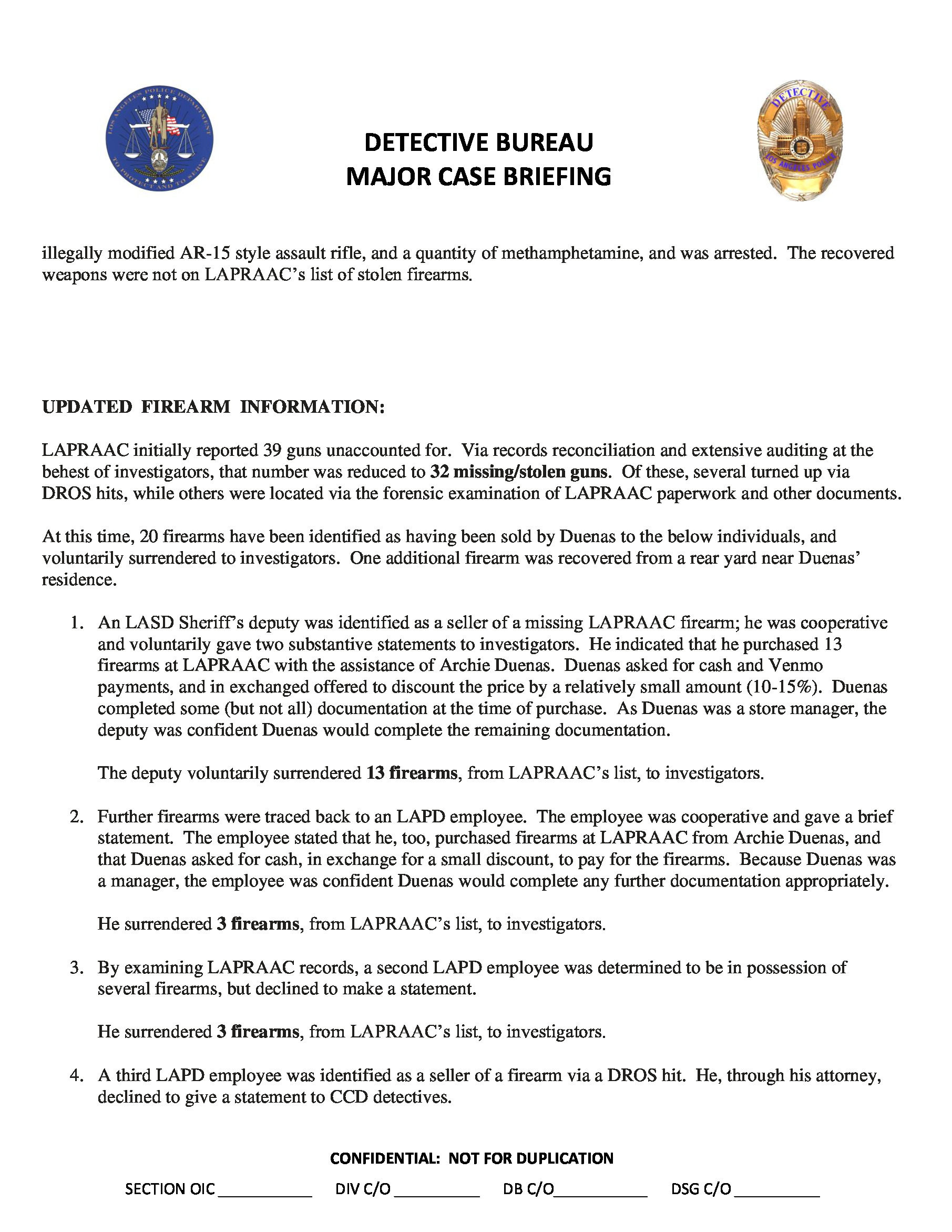 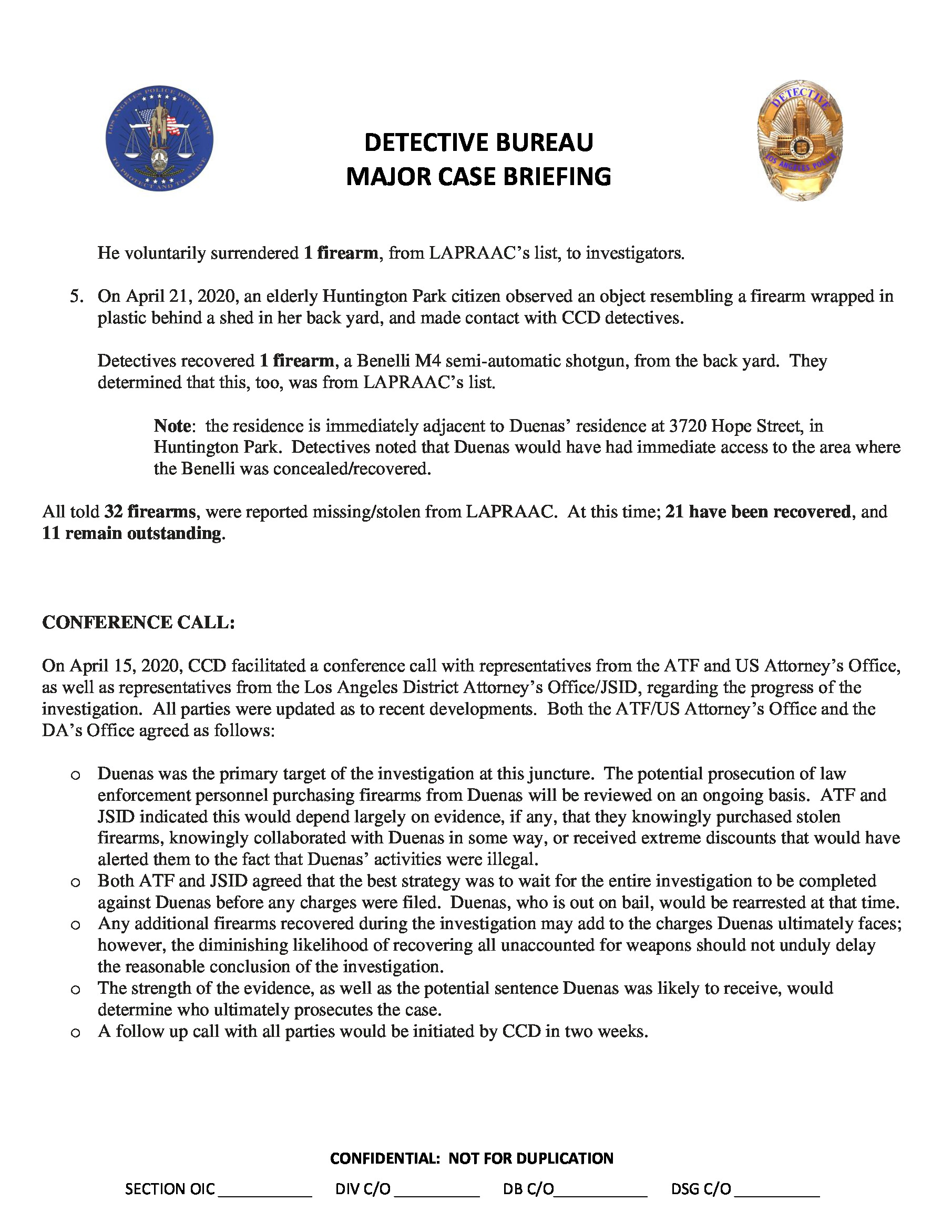 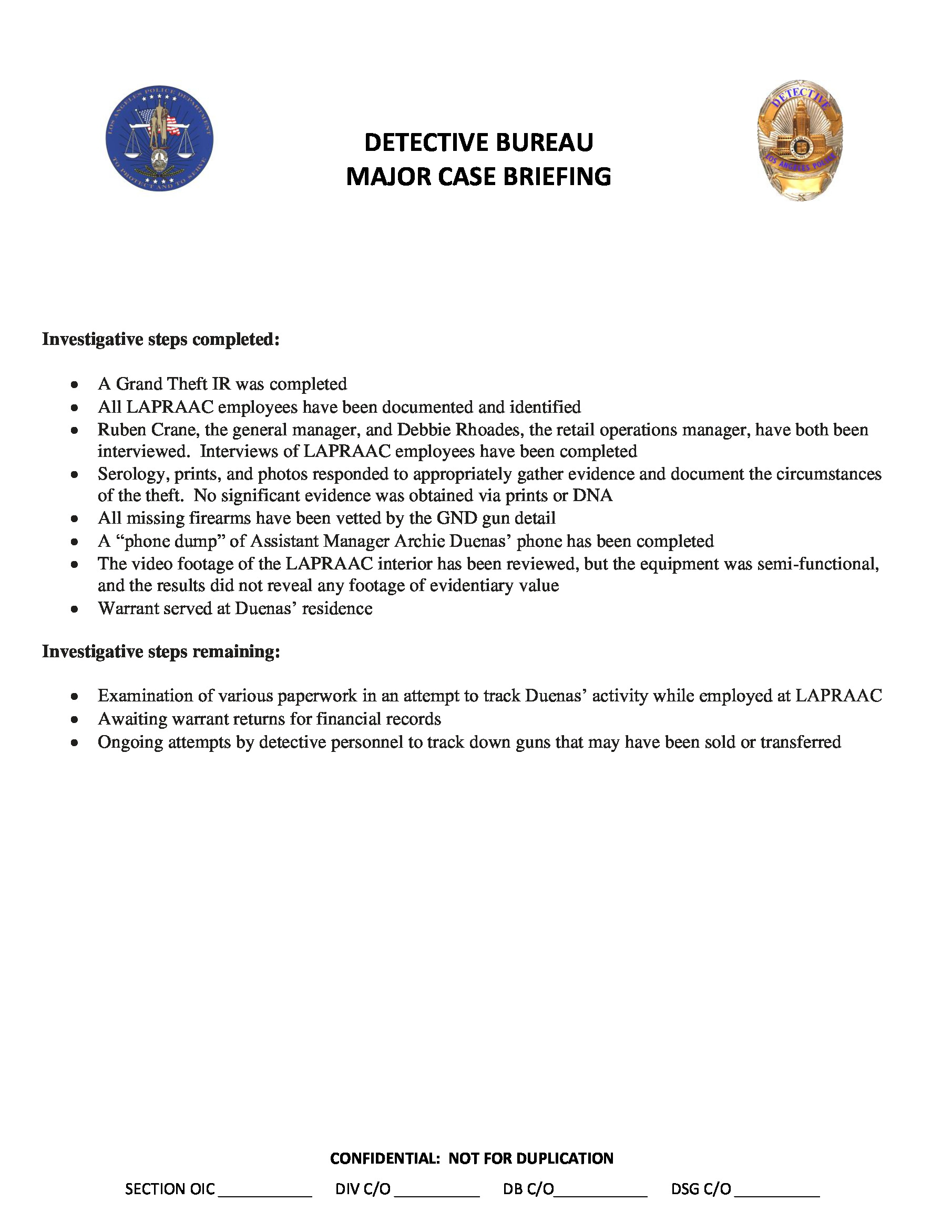