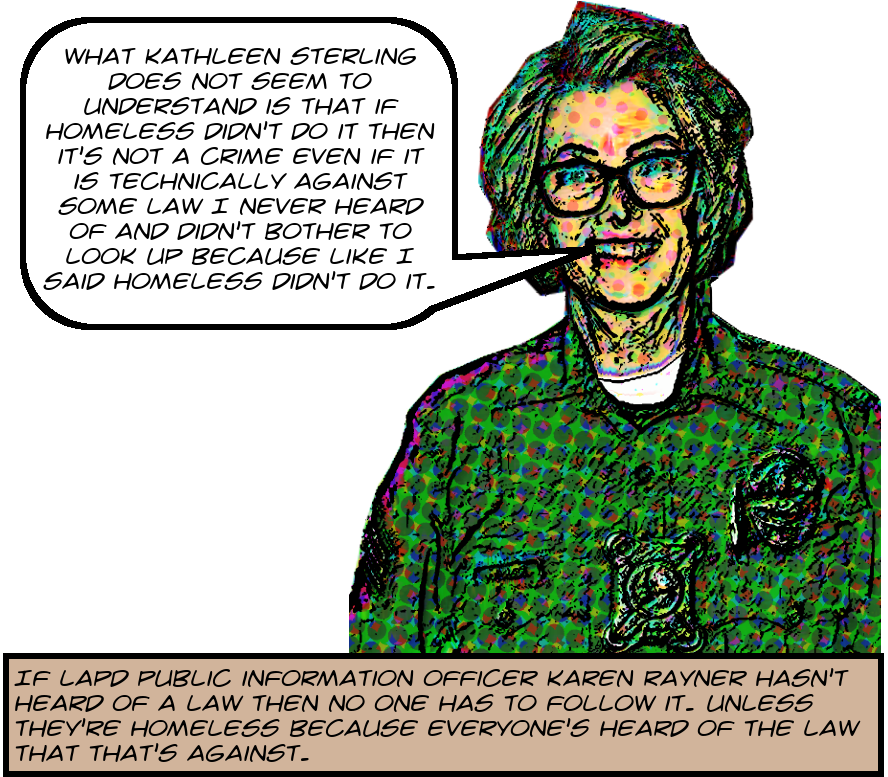 And somehow it fell to Valley public information officer Karen Rayner to deal with this matter, which Sterling, you will recall, had told the police was “blatantly illegal.” Take a look at this email from later in the day, in which Karen Rayner, one of the finest legal minds of her generation, writes to her boss Al Mendoza offering up this tasty tidbit of staggering cop genius:

This email was brought to my attention today and I am looking for your input before I respond. Since the papers are free, I could not think of a crime. It’s rude, but is it a crime. You can see from the screen shots, it’s clearly intentional and they are proud of themselves. To confirm I spoke with Detective Dennis Noone and he agreed.

Got it? Rayner “could not think of a crime.” and “Detective Dennis Noone … agreed.” But, you know, it’s interesting, because even though the cops couldn’t think of a crime, the California State Legislature could and did think of a crime. It’s found at 490.7(a,b) PC, which states unambiguously:

The Legislature finds that free newspapers provide a key source of information to the public, in many cases providing an important alternative to the news and ideas expressed in other local media sources. The Legislature further finds that the unauthorized taking of multiple copies of free newspapers, whether done to sell them to recycling centers, to injure a business competitor, to deprive others of the opportunity to read them, or for any other reason, injures the rights of readers, writers, publishers, and advertisers, and impoverishes the marketplace of ideas in California.

(b) No person shall take more than twenty-five (25) copies of the current issue of a free or complimentary newspaper if done with the intent to … (3) Deprive others of the opportunity to read or enjoy the newspaper.

Now, it’s not that the LAPD lacks the resources to find out what crimes there are in the world. They have whole gangs of lawyers and training officers at their disposal to come up with creative and novel legal theories on the basis of which to prosecute the poor, the helpless, the vulnerable and after they come up with them, to promulgate awareness of them at roll call and the like. We’ve seen just for instance Deputy City Attorney Kurt Knecht wracking his pernicious little brain to find ways to cite homeless people for standing in alleys, and Deputy City Attorney Tia Strozier offering free legal advice to psychopathic rageball George Yu and tricky little ways to cite street vendors.

The difference in this case, obviously, is that the perpetrators are lightskinned zillionaire-adjacent housedwelling vigilante cop loving thugs rather than helpless poor people. Obviously, says every fiber of the consciousness of every police officer everywhere anytime, what these people are doing is not illegal. Therefore I won’t, say the cop-consciousness-fibers, even bother googling, even bother asking a Deputy City Attorney to come up with a theory on which to prosecute this merry gang of fun-loving non-criminals. Instead, says Karen Rayner, let’s just drop it.

But now, thanks to the fact that I bothered to spend 3 seconds typing four words into Google,1 the cops are on notice that these vigilante thugs did in fact break a law. And it was less than two months ago. And we have their names and their spontaneous admissions of guilt. They can still be brought to justice. They must be brought to justice. It seems that a first offense is only an infraction, but subsequent violations are misdemeanors, and I’m sure a creative prosecutor, and we have no shortage of creativity of a certain type among our local prosecutors, more’s the damn pity, could find a way to charge each instance as a separate violation.

Not to mention the conspiracy, laid out plain for the whole world to see. Conspiracy is a crime in itself. So, LAPD, the ball’s in your court. They did break the law. You have the evidence. Now arrest them. And City Attorneys out there? Take a little break from arresting the homeless for sitting on the curb and arrest these book-burning Nazi NIMBYs. The whole world is watching, so get to work. 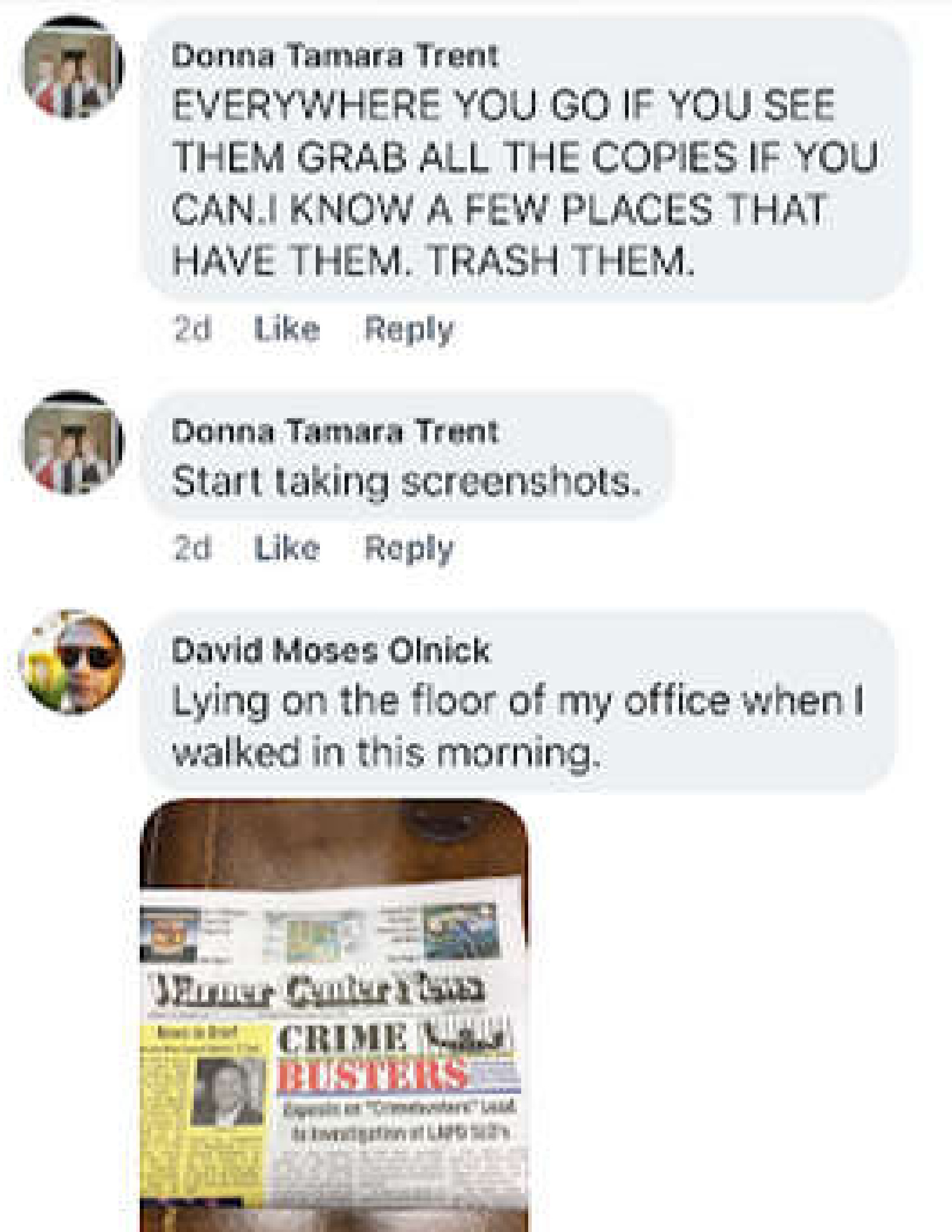 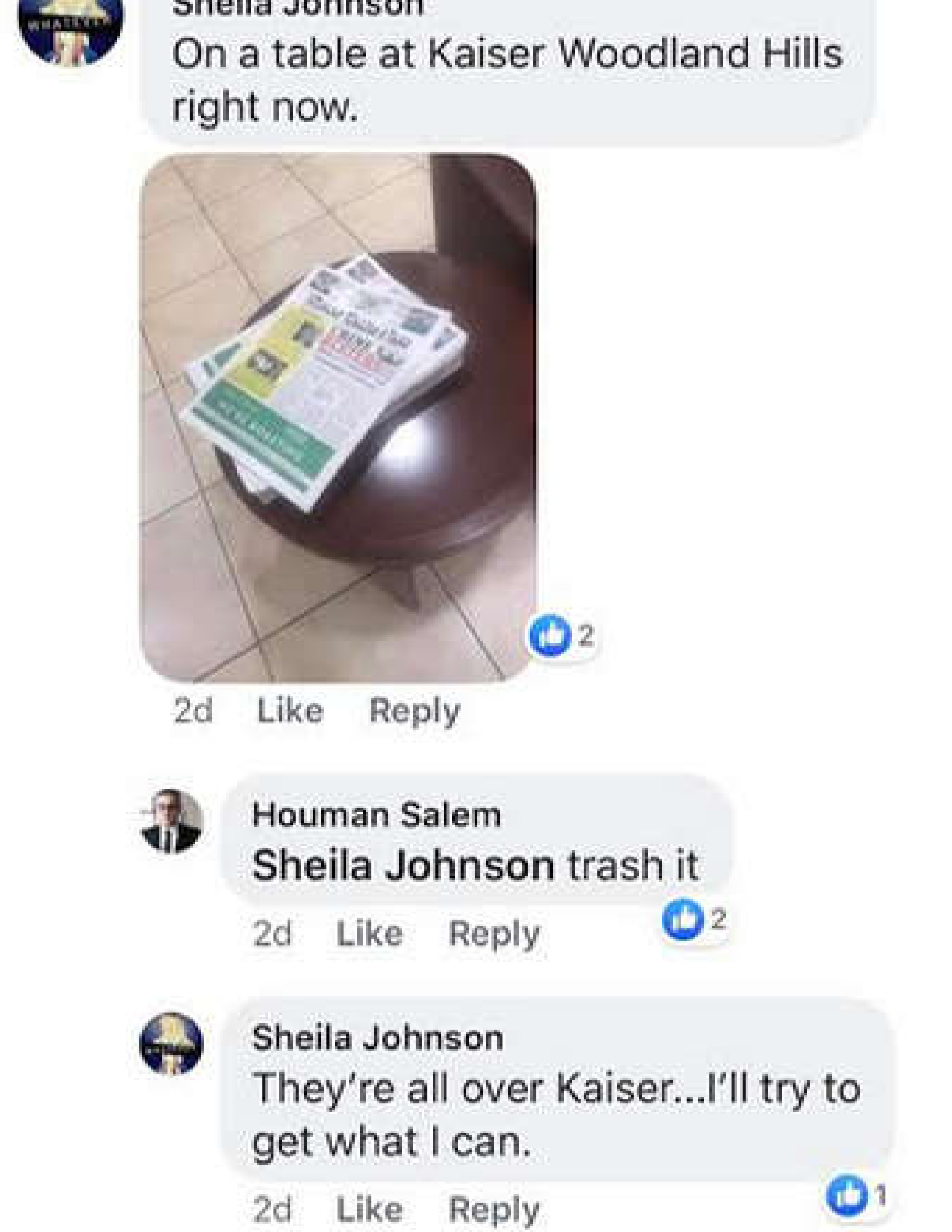 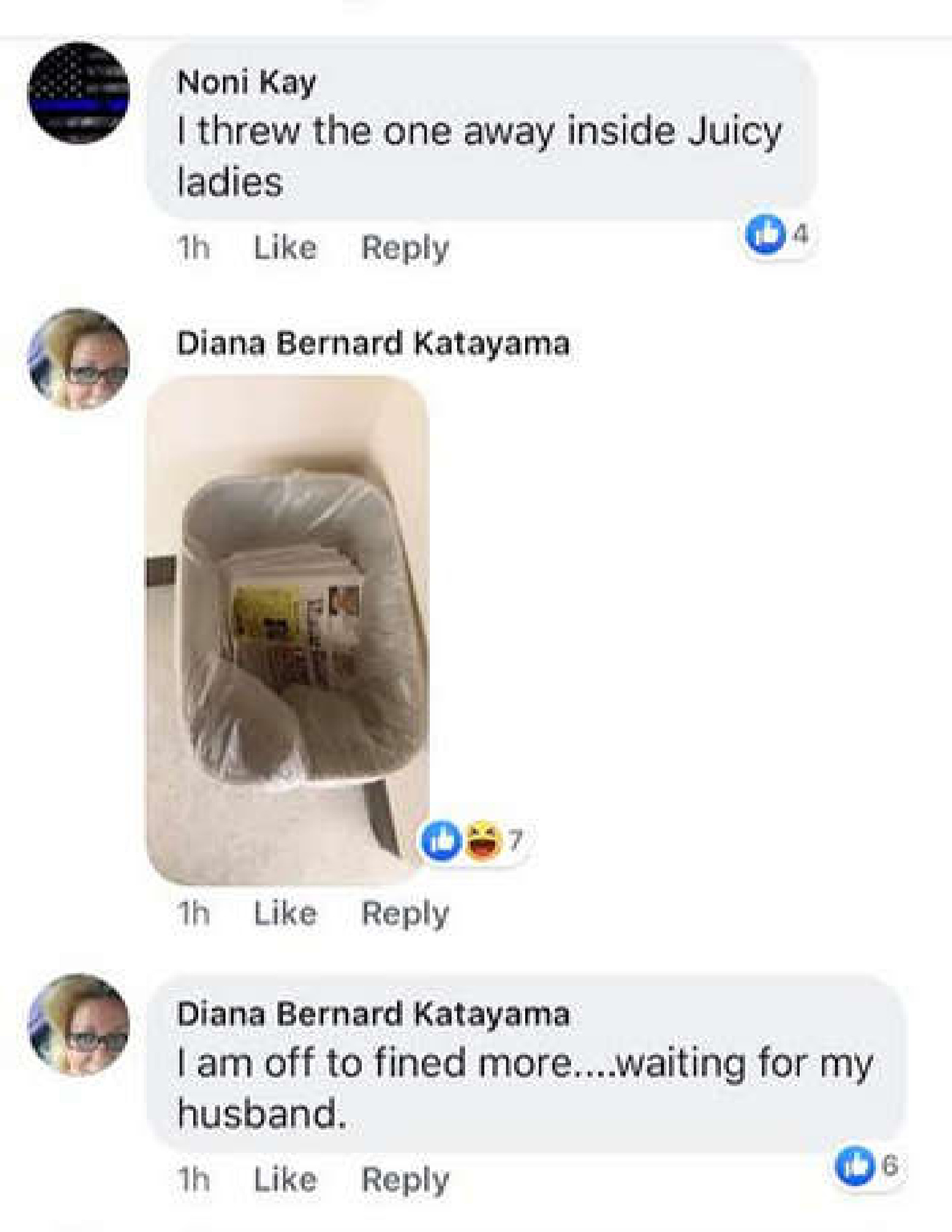 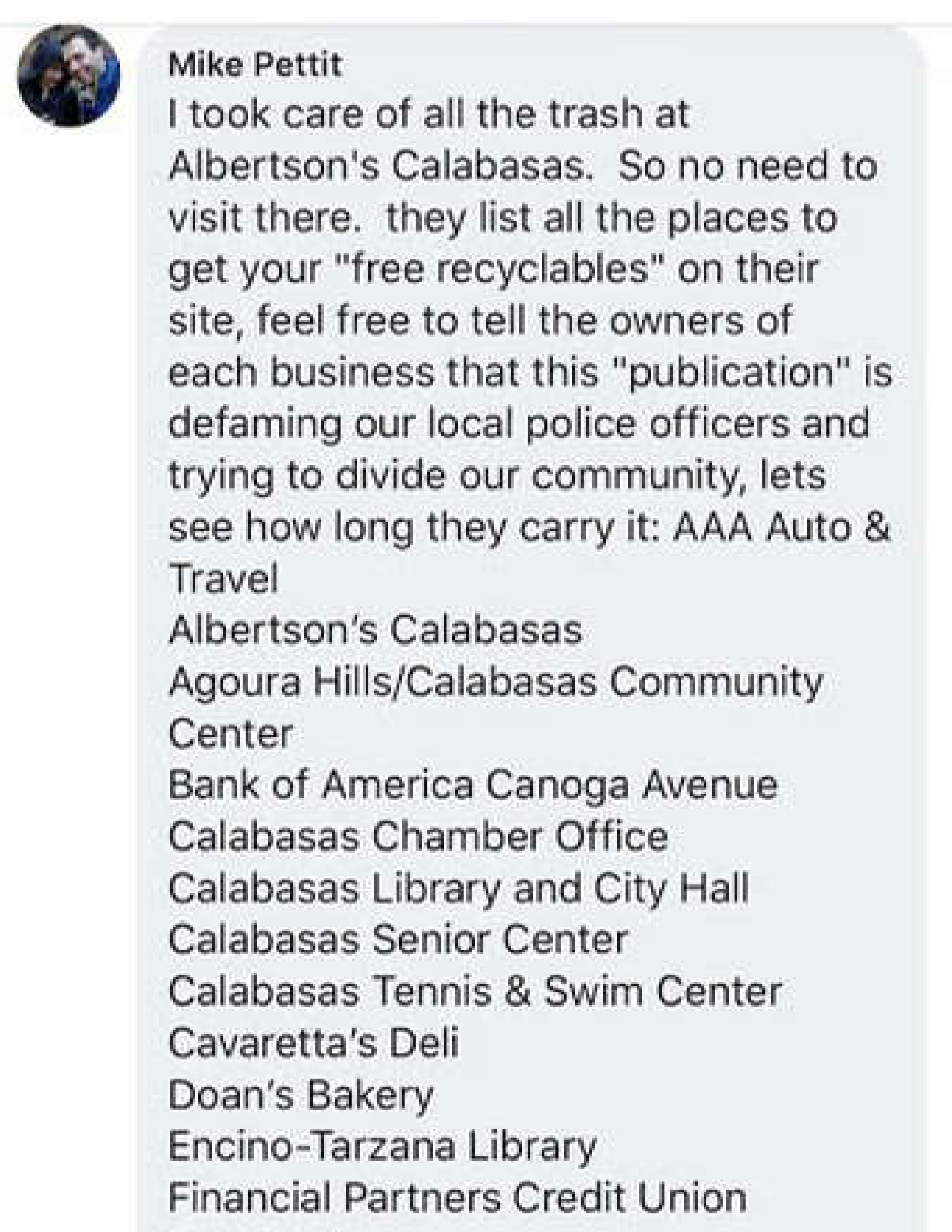