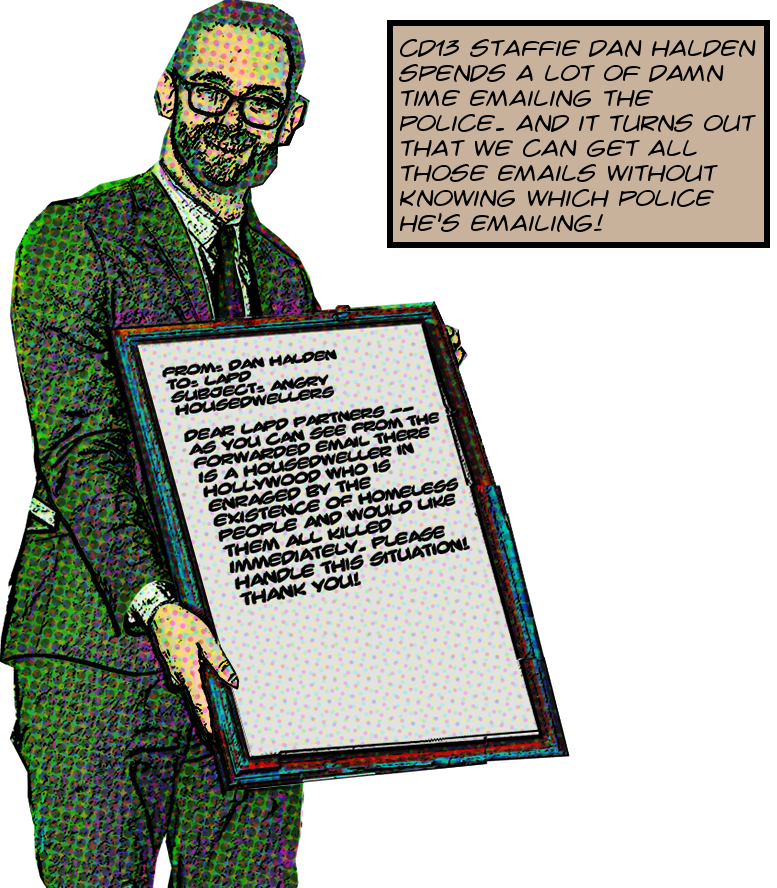 On January 13, 2019 I asked the Los Angeles Police Department for emails between CD13 staffer Dan Halden and any LAPD employee from January 1, 2016 through December 31, 2018. Yesterday, eight months later, they produced emails from October and November 2018 with the promise of more to come. How we got to this point is the subject of today’s post.1 Here’s what the request said exactly:

Per my rights under the California Public Records Act, please provide all correspondence between anyone who works in the Los Angeles Police Department AND daniel.halden@lacity.org, for the time period of January 1, 2016 to December 31, 2018. Correspondence is defined as all emails, texts or other communications.

To be honest, when I made this request in January 2019 I was expecting LAPD to refuse to produce the records on technical grounds,2 And on January 18, 2019 they did exactly that. They gave two separate and mutually contradictory reasons for refusing to produce.

First they told me that “[y[our request does not describe the records sought clearly enough to permit my staff to determine whether any responsive documents exist.” This claim is based on the CPRA at §6253(b), which requires of requests that they “reasonably [describe] an identifiable record or records”. LAPD’s second reason for refusing to produce was that it would be too much work:

A search of email communications and correspondence for “anyone who works in the Department” would be unduly burdensome for the Department as interpreted in the “public interest” provision of section 6255 of the Act, and would require a separate search of each individual email account of approximately 14,400 Department email accounts.


The theory underlying this exceedingly commonplace but nevertheless mostly bogus reason for denying requests is that there’s a huge public interest in public agencies carrying out the purposes for which they’re created. If people’s public records requests, the theory goes, take up too much time then the agencies are prevented from effecting their purposes. Thus, they say, there’s a public interest in not fulfilling requests that take too much time.

This is not unreasonable in theory since it prevents bad actors and smart alecks3 from bringing the government to a standstill by asking for unreasonably wide searches. On the other hand it’s exceedingly unreasonable in practice in the City of Los Angeles, where I have had agencies deny requests on this basis when there are like 500 pages involved.

And if processing 500 pages is going to bring down the government well, a vigorous sneeze might do as much or more damage. But like I said, I was pretty much expecting LAPD to deny the request. As to their first claim, that my requests didn’t describe the records precisely enough, well, that’s obviously wrong. And I explained to them that my request did

… in fact reasonably describe identifiable records. here’s the proof. Look at any email. Is it from someone at lapd.online or lapd.lacity.org? If yes, continue. Is it to daniel.halden@lacity.org? If yes, it’s responsive. If no, repeat with next email.

But it was their second claim that I was really prepared for. I’ve been thinking for years now about whether agencies have a duty to search for emails across all their accounts or whether they can successfully limit requests to relatively short lists of specified email addresses. This issue comes up not only in the context of the Public Records Act, but also in the discovery process.

And in particular, in 2014 The Legal Aid Foundation of Los Angeles filed a federal lawsuit against the City and the Downtown Industrial District Business Improvement District. And as part of discovery they asked for a broad search of LAPD emails. LAPD refused to conduct the search, claiming, as they did in response to my 2019 request, that the process was burdensome and beyond their technical capabilities.

The refusal led to a fairly bitter dispute in court, which included an LAPD systems analyst essentially contradicting himself under oath and also misrepresenting the department’s ability to search across all mailboxes. And as the judicial process brought out more information, it became even more clear that the LAPD had been completely dishonest with respect to their ability to conduct the requisite search.

If a public agency will lie to a federal court, obviously they’ll lie to a random requester like me, which is why I was expecting them to deny my request. And there’s even another twist!4 In 2014 and 2015 LAPD was using some email software called Groupwise, but they have since switched to Outlook. And I happened to know that Microsoft had recently given Outlook administrators the ability to search across all mailboxes. Hence my response:

… it’s pretty disingenuous to suggest that the number of accounts has anything to do with the burdensomeness of the search. If you ask your ITG you will find that Outlook allows searches across all accounts at once. This is explained in this MS help document: https://www.microsoft.com/en-us/microsoft-365/blog/2015/06/17/introducing-compliance-search-in-office-365/

And not only were they lying about their ability to search across all email accounts, well, I had actually laid a trap for them with this request.5 You see, I had learned that in September 2018 LA Times reporter Dakota Smith had filed a CPRA request which said:

Per my rights under the California Public Records Act, please provide all correspondence between anyone who works in the Los Angeles Police Department AND any representative of the Democratic Midterm Victory Fund, including Rick Jacobs and Yusef Robb, for the time period of May 15, 2018 to September 7, 2018. Correspondence is defined as all emails, texts or other communications.

And, as you may note, I totally modeled my request after Smith’s. Down to the very freaking words. And the reason I did so, and the trap for LAPD Discovery, was that they didn’t argue with Smith at all. They didn’t say anything would be burdensome, they didn’t blather on about searching 14K accounts. They just got to work and produced emails less than four months later. Which I pointed out to them when they denied my request:

Finally, LAPD has done this exact kind of search for other requesters. Take a look at 18-2401. You just did the search there and didn’t claim it would be burdensome. Do LA Times reporters get special treatment?

And then, well, LAPD didn’t answer and didn’t answer and then in February they admitted that they had been able to conduct the search but there were too many emails and could I narrow my request? I said that I could not. Then in March a new analyst took over and again asked me to narrow. Again I refused. Then didn’t hear anything till August when yet another analyst took over and told me that the previous analyst had retired and left the request undone.

And then, yesterday, I got two months worth of emails which, as I said, are available on Archive.Org. And the moral of the story? Well, I suppose that it is that LAPD will deny requests and lie about the reasons and unless one has fairly convincing evidence that that’s what they’re doing, they’ll never hand over anything. And even when they do it takes them freaking forever.

Image of Dan Halden, the people’s choice™, is ©2019 MichaelKohlhaas.Org and sonuvvabitch here he is again!