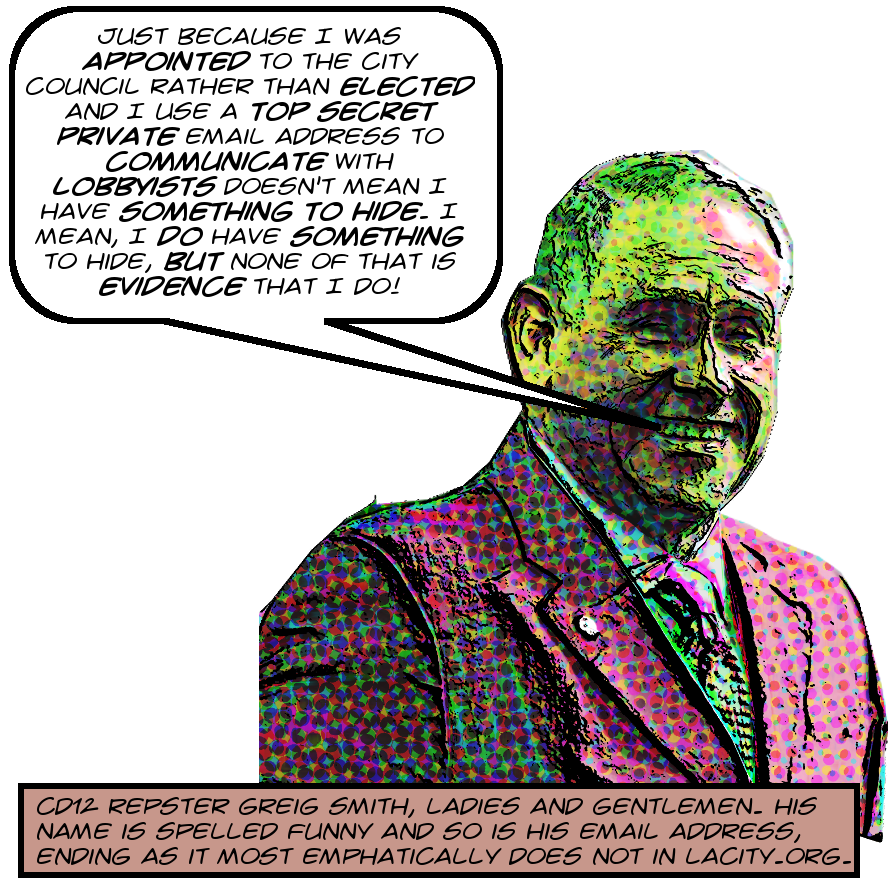 With yesterday’s revelations that Betsy De Vos and seven other members of the Trump administration are being investigated by the House Oversight Committee for their illegal, unethical, appalling, and hypocritical use of private email addresses to conduct public business I thought it was a good time to catch you all up on the state of my investigation into private email use by our own local City Council folks, precisely none of whom are being investigated by anyone for this specific transgression.1

Previously I discovered and revealed that Mitch O’Farrell, David Ryu, and Gil Cedillo all have privately controlled email accounts through which they conduct City business. Jose Huizar also does this, but I didn’t break that story, the FBI did.2 And today, thanks to a huge set of emails I recently received from the ever-courtly Colin Sweeney, director of communications over at CD12, I can, for the first time of which I am aware, break the news that the name of Sweeney’s current boss, the infamous Greig Smith, belongs right smack on that list as well.

The email address in question is citycouncilguy@yahoo.com. The set linked to above only contained a few examples of Smith’s use of this email address to conduct City business, but then I only picked them up by accident. Thanks, as we know, to the monumental 2017 opinion in City of San Jose v. Superior Court, these emails are public records in themselves. Of course I have a request in already for the rest of them, but I imagine it could be a long process. Or maybe not, we’ll certainly see! Read on for links to the emails along with some commentary.

★ September 25, 2018 — Smith didn’t resume office until January 1, 2019, so this email is only a public record by virtue of other recipients at the City. It’s interesting, though, as it concerns Oakridge, the huge estate of Jack Oakie. Evidently Smith was and/or is on some committee seeking to preserve it.3 It doesn’t mean this isn’t important, though.

It was sent by Andrea Alvarado from her email address northridgebeautification@gmail.com, showing that she knows Smith’s private email address and therefore has access to a covert communication channel. Her group, the Northridge Beautification Foundation, has been linked to anti-homeless vigilantism in the Valley, about which I wouldn’t be surprised if you end up reading an awful lot more in the near future, both here and elsewhere.

★ October 24, 2018 — Another conversation about Oakridge preservation, also prior to Smith’s current official status, so also important only for the connections it illustrates.4

★ February 21, 2019 — An email chain between now-Councilmember Smith and Don Larson about some topiary crapola they installed on Tampa Avenue near the 118. I’m not sure what the point of the topiary is although I wouldn’t be surprised if it was some weirdo twist on hostile landscaping. The email is just chocky with vaguely unsettling images which cannot, and I have tried, be unseen. 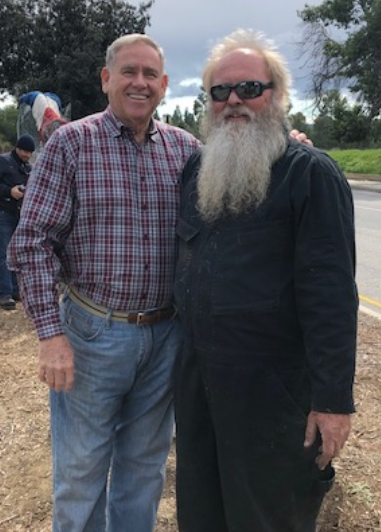 This email, though, is immensely important as it reveals the fact that Don Larson and Smith are friends and that Larson, who is in charge of a creepy anti-homeless vigilante operation known as Clean Streets Clean Starts, which seems to be associated strongly with the aforementioned Northridge Beautification Foundation, knows Smith’s private email address and therefore has access to backchannel commo with the CM. As above, stay tuned, both to this channel and others, for more info on these off-the-chain psychopaths.

★ March 21, 2019 — Here we have an example of exactly one of the kinds of things that are very, very wrong with City officials using private email addresses that only a few people know about. This is an email from Andrea Alvarado of Northridge Beautification to various people, including Smith at his private email address, complaining about shopping carts and, by extension, homeless issues. Smith proceeds to forward it directly to his Senior Field Deputy Colin Crews, who then forwards it along with the terse message “Please grab these carts tomorrow. Thanks” to Christian Loza and Jorge Alvarez, who are part of some creepy Valley nonsense called the CD12 Rapid Response Team.

Don’t know exactly what it is, but from Mitch Englander’s leftover description, it doesn’t sound good. And that’s how stuff gets done in our broken municipal system. Councilmembers have secret email addresses that only a few people know, they forward stuff to staff from them, and staff, seeing from the provenance that it’s very high priority, just takes care of it. That most people don’t have access to such channels is precisely the problem.5

★ June 8, 2019 — This is an email from Eric Rose, a registered lobbyist and partner at Englander, Knabe, and Allen, hands-down the most satanic lobbying firm in the City of Los Angeles.6 The email has to do with Smith’s motion that the LA City Council oppose SB516, a bill which would outlaw so-called poverty tows in California.

This is an utterly reactionary position of precisely the type that CD12 is famous for, but for our purposes what really matters is that registered lobbyist Eric Rose has access to and uses Greig Smith’s private email address, and he uses it to advocate for political positions, which is his job. As he’s been known to do, Smith forwarded Rose’s email on to his legislative deputy, Stephanie Uy, with no message. The fact that it came from him, from his private email, was message enough.

So that’s today’s news. I know you all have likely been waiting for more of these emails to turn up, and I have certainly been working on getting them. Wheels, as we know, turn slowly, slowly, in CPRAlandia, but they do turn, and progress is happening. Stay, as I know you will, tuned!

Image of Greig Freaking Smith is ©2019 MichaelKohlhaas.org and if you wanna look you gotta look, doncha know?