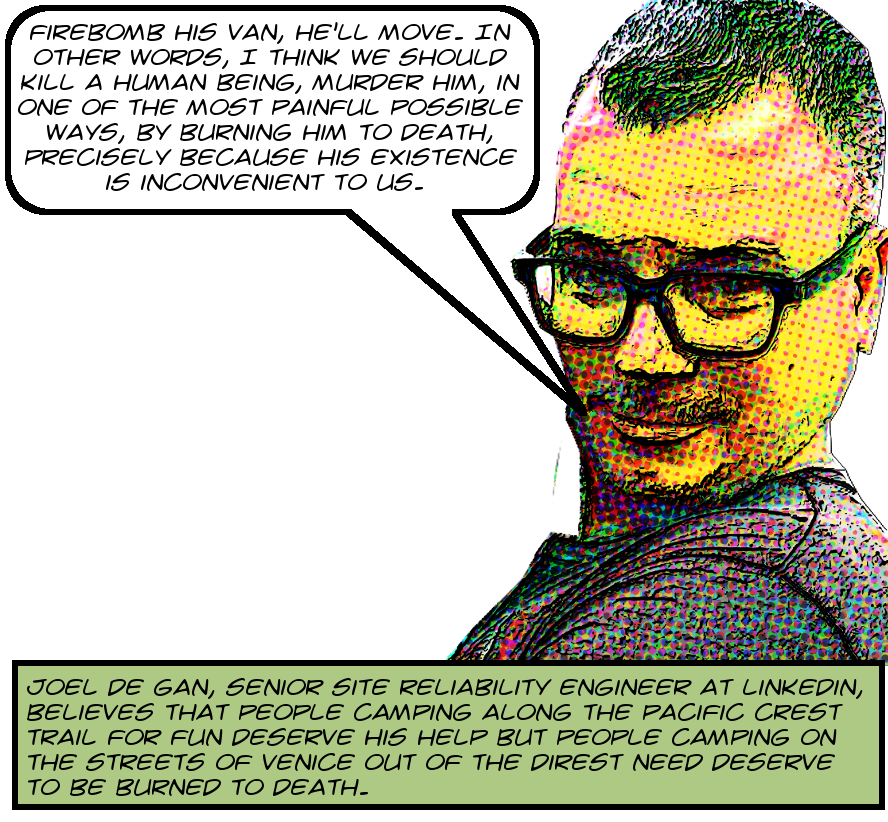 It ought to be easy enough in this City at this moment to get just too used to the casual sadism, the genocidal urge, the unhinged anger, the antihuman racism, the unreasoning relentless violence, directed by sociopathic housedwellers towards our homeless neighbors, including the calls to use starvation as a policy tool. It ought to be easy enough because of the ubiquity of the hatred, the relentless ever-present angry self-pitying rhetoric, but it’s not, it never is, there’s no bottom to this pit and no getting used to its horrors. Just for instance see this post right here on the Venice (California) Facebook page, and here’s a screenshot in case something changes over there.

It seems there’s a person living in a van at Venice and Louella. And the neighbors don’t like it. So Swedish canine-mold-detection specialist Yvonne Sjostrand1 posted a rambling cri de coeur about the vandweller and then, just like that, the usual conversation began yet again. Garcetti won’t do anything, cops won’t do anything, stolen bikes, human excrement, unaesthetic laundry, insert facile self-serving cynicism here, blah blah blah. Until things took a decidedly darker turn with the appearance in the conversation of one Joel De Gan, a housedwelling member of the same profession that built the infrastructure of genocide in Nazi Germany, employed by LinkedIn, with a simple plan. Firebomb his van, he’ll move.

And then all the other Facebook warriors were like ummm, Joel, we hate homeless people too but we don’t want to murder them, we just want them to move to Lancaster or Culver City or whatever. Just kidding, none of them said anything about Joel’s suggestion, and five of them took the trouble to click to like or smileyface it. Because not only does murder strike these housedwellers as an appropriate response to a human being living somewhere they don’t want him to live, but it’s an unremarkable response as well. 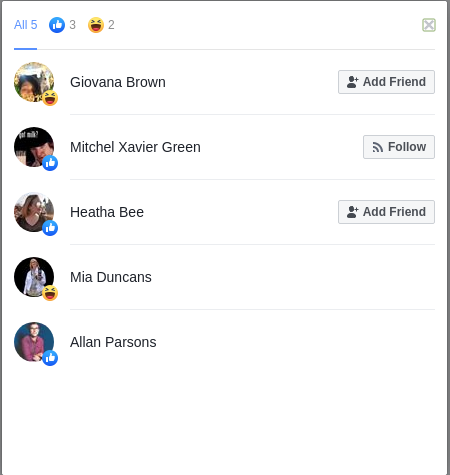 And these like-clickers seem like ordinary enough people, there’s Giovana Brown, who wants donations to a hospital for her birthday and also thinks that burning people to death is a good idea. There’s Mitchel Xavier Green, who at least via his profile picture admits to an unhealthy interest in ultraviolence, which is consistent with his approval of burning people to death.

And it’s a serious research problem in history, sociology, psychology, as to how a society becomes genocidal. Is it authoritarian leaders frightening ordinary people into supporting their killing machines? Does the will of the people create the leaders that organize the genocidal policies the masses crave?

One thing (among many) that makes this problem hard to solve is the lack of data. In the past, it seems, very few people took the time to record their reasons for supporting, participating in, genocide. But despite its many flaws, at least we can be sure that Facebook has solved this problem for future historians. At least there’s that.

2 thoughts on ““Firebomb His Van. He’ll Move” — Just Some Psychopathic Venice Housedwellers Musing — In Public No Less — About Murdering A Homeless Human Being Living In A Van By Burning Him To Death — His Sins? — They Feel Scared — They Think He Steals Bikes — He Urinates — He Hangs Laundry On A Tree — Therefore He Must Die”