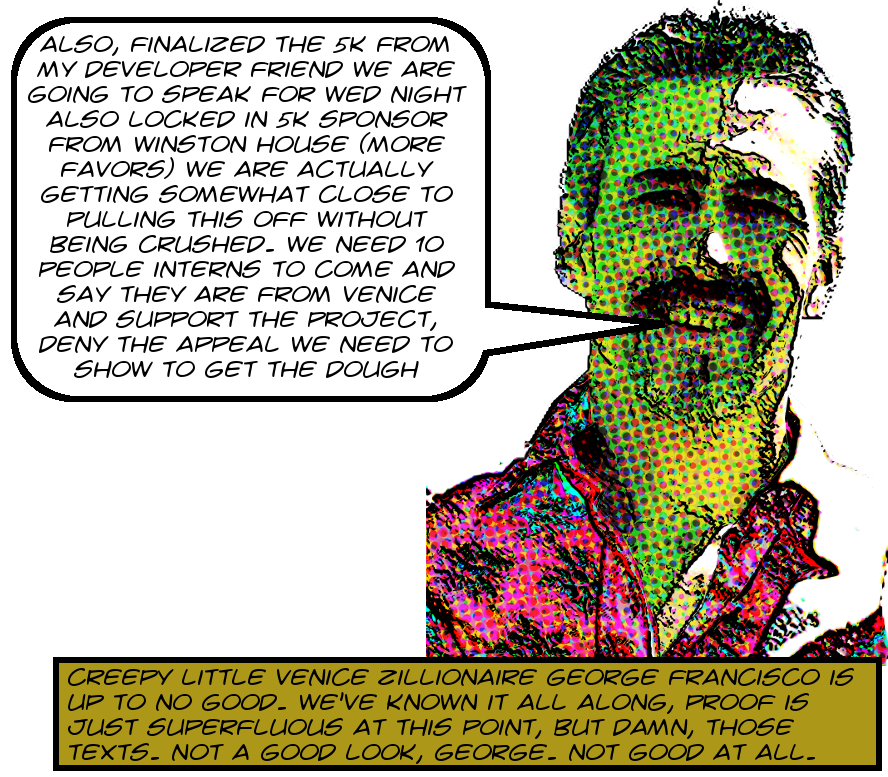 OK, elections are coming up for the Venice Neighborhood Council.1 And you can read this excellent guide to the candidates and the issues at the excellent Free Venice Beachhead. And of course you know our old friend, the creepy little Venice zillionaire himself, George Francisco, who is long-time Vice President of the VNC.

He’s famously also president of the Venice Chamber of Commerce, as well as the supergenius who once got the LAPD to relocate a homeless man who happened to be in the way of some nonsensical “high-impact event” he was planning on the site of the guy’s tent.And his opponent in the already-highly-charged election is Venice Pride head Grant Turck. And there are some debates coming up and stuff, but Turck isn’t holding fire, not holding at all.

This afternoon, May 17, 2019, Turck filed this complaint against George Francisco with the Los Angeles City Ethics Commission. He alleges very credibly a number of extremely serious violations of various governmental ethics ordinances. What’s more amazing is that he has copies of what really appear to be Francisco’s text messages and emails implicating himself in what look like some really deeply shady shenanigans.

Even if nothing comes of this matter, and who can say what will happen when the Ethics Commission is involved, it ought to make the debates interesting and, maybe, just maybe, it’ll be enough to get the creepy little zillionaire tossed out of the temple2 if not into the slammer. Read on for a transcription of Turck’s work and images of the amazing text messages and emails.

Re: Complaint Regarding Alleged Criminal Briber} 7 and Alleged Violations of Los Angeles’ GEO by The VNC Vice President George Francisco

The purpose of this letter is to request that you immediately investigate the following alleged violations of the State’s Penal Code and the City’s Governmental Ethics Ordinance (GEO) by the sitting Venice Neighborhood Council (VNC) Vice President George Francisco. In order to ensure transparency, accuracy of information, and a fair election on June 2, 2019, an investigation of these allegations must be commenced at once.

The Ethics Commission is charged with the impartial and effective administration, implementation, and enforcement of the City’s governmental ethics laws. Charter §§ 702, 706. The GEO (Los Angeles Municipal Code (LAMC) §§ 49.5.1 et. seq.) was enacted to accomplish a number of purposes, including ensuring that the City’s processes promote fairness and equity for all and helping to restore public trust in governmental and electoral institutions. LAMC §§ 49.5.1(C)(2), (7),

A. SUMMARY OF LAWS ALLEGEDLY VIOLATED

Three of the laws designed to foster the GEO’s goals are at issue here. The first prohibits City officials from misusing or attempting to misuse their City positions or authority to create a private advantage or disadvantage of any kind for any person. LAMC § 49.5.5(A).

The third prohibits a member of a City board who is required to file statements of economic interests pursuant to the Political Reform Act from receiving compensation to communicate, either personally or through an agent, with a City official for the purpose of attempting to influence action on a City matter on behalf of a person other than an agency. LAMC § 49.5.13(A).

Furthermore, the allegations contained herein may violate California Penal Code § 68, subdivision (a), which prohibits every executive officer of the State of California, a county or city therein, or a political subdivision thereof, from asking, receiving, or agreeing to receive, any bribe, upon any agreement or understanding that his vote, opinion, or action upon any matter then pending shall be influenced thereby.

B. SUMMARY OF ALLEGED FACTS

On June 20, 2017, the VNC Board voted and passed a motion to recommend approval of the Case as presented if FMB provided a Mello letter and if the dedication entailed widening a street with similar tree to be replaced of species and size in the parkway. 2 Mr. Francisco abstained from voting on the motion.

On July 18, 2017, the VNC Board voted and passed a motion to recommend approval of the Case if FMB provided a Mellow letter. Mr. Francisco abstained from voting on the motion. Thereafter a Los Angeles Department of City Planning public hearing was held on the Case at Los Angeles City Hall on August 9, 2017, an appeal of the Case was filed on March 19, 2018, and a West Los Angeles (WLA) Area Planning Commission public hearing on the Case was scheduled for June 6, 2018.

“I just got a lock on another 5k from my developer friend… Wed June 6 5pm, we need 10 people interns to come and say they are from Venice and support the project, deny the appeal… We need to show to get the dough”

“Also, what is our performer line up again?”

In May 2018, Mr. Francisco and Mr. Wilson were allegedly working together to plan and produce a community event called FlowerFest in the Venice Neighborhood on June 9, 2018. On June 5, 2018, the day before the WLA Area Planning Commission public hearing on the Case, Mr. Francisco allegedly sent Mr. Wilson an email 6 that reads in part:

“Also, finalized the 5k from my developer friend we are going to speak for Wed night…We are actually getting somewhat close to pulling this off without being crushed – right now the shortfall is 23k”

“Good evening, George Francisco, 202 Horizon Avenue, I’m here officially as the president of the Venice Chamber of Commerce to support the project, um, I’m also the vice president of the Venice Neighborhood Council and if you would like I will recount our neighborhood council vote for you, um, in support of the project to represent that. Uh, but more than that I’m here because this is an amenity to the block. It’s an amenity to the community. It adds housing in a very difficult environment to actually create housing. Um, it fits, its attractive, um, but we’re not here for any of those reasons. We’re here simply to provide a social setting for a group of people who want to file appeals. And every time I’m here, Commissioner Margulies, I’m shocked at how you act.”

Mr. Wilson allegedly said the following at the public hearing:

According to the minutes from the WLA Area Planning Commission’s June 6, 2018 public hearing, Commissioner Newhouse moved for motions separately on Item Nos. 5 and 6, Commissioner Yellin seconded on both motions, and President Margulies voted against both proposed motions. 11 Thus “[i]nasmuch as the Appeal Board failed to act, the appeal shall be deemed denied and the decision from which the appeal was taken shall be deemed affirmed.” 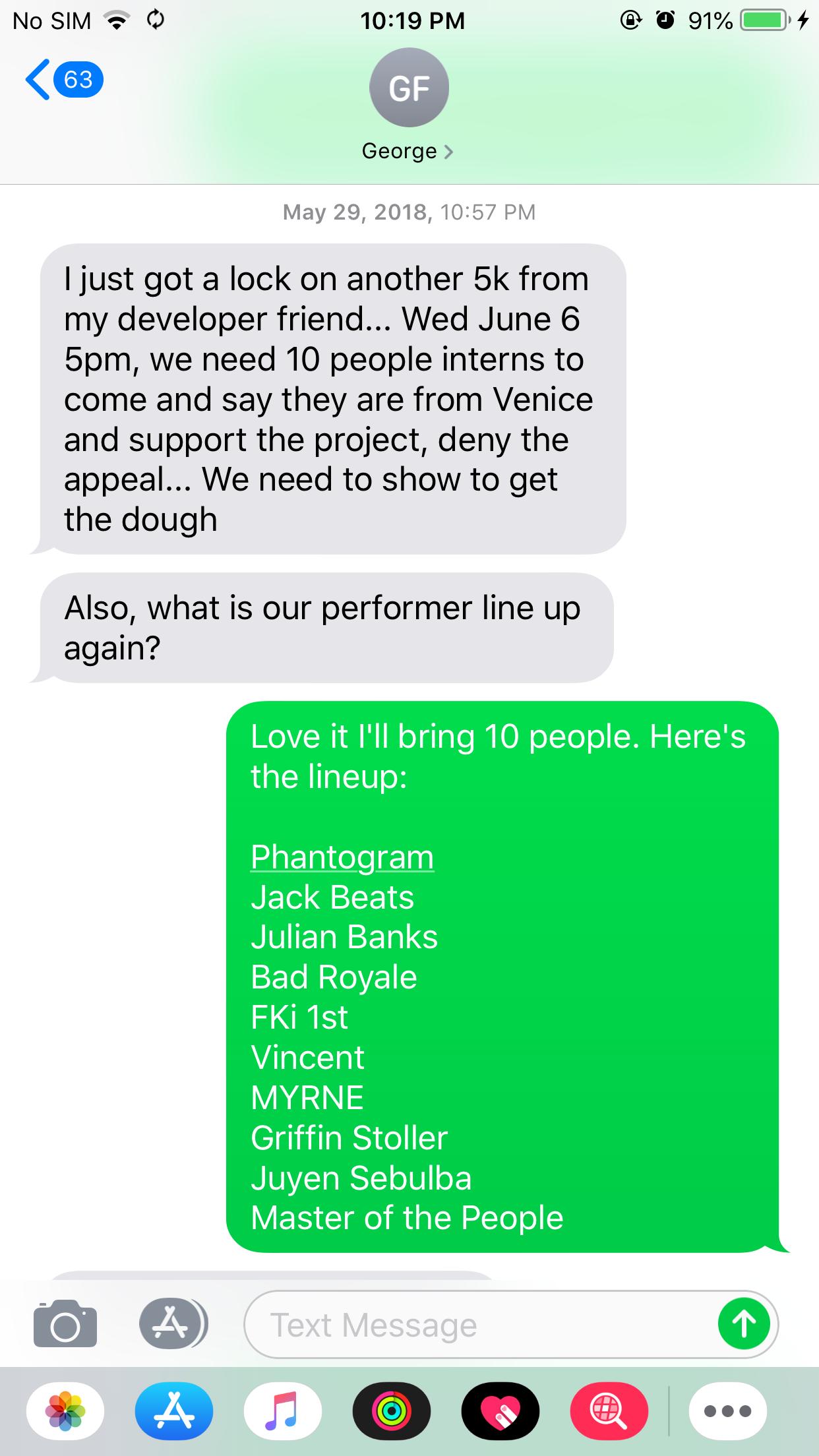 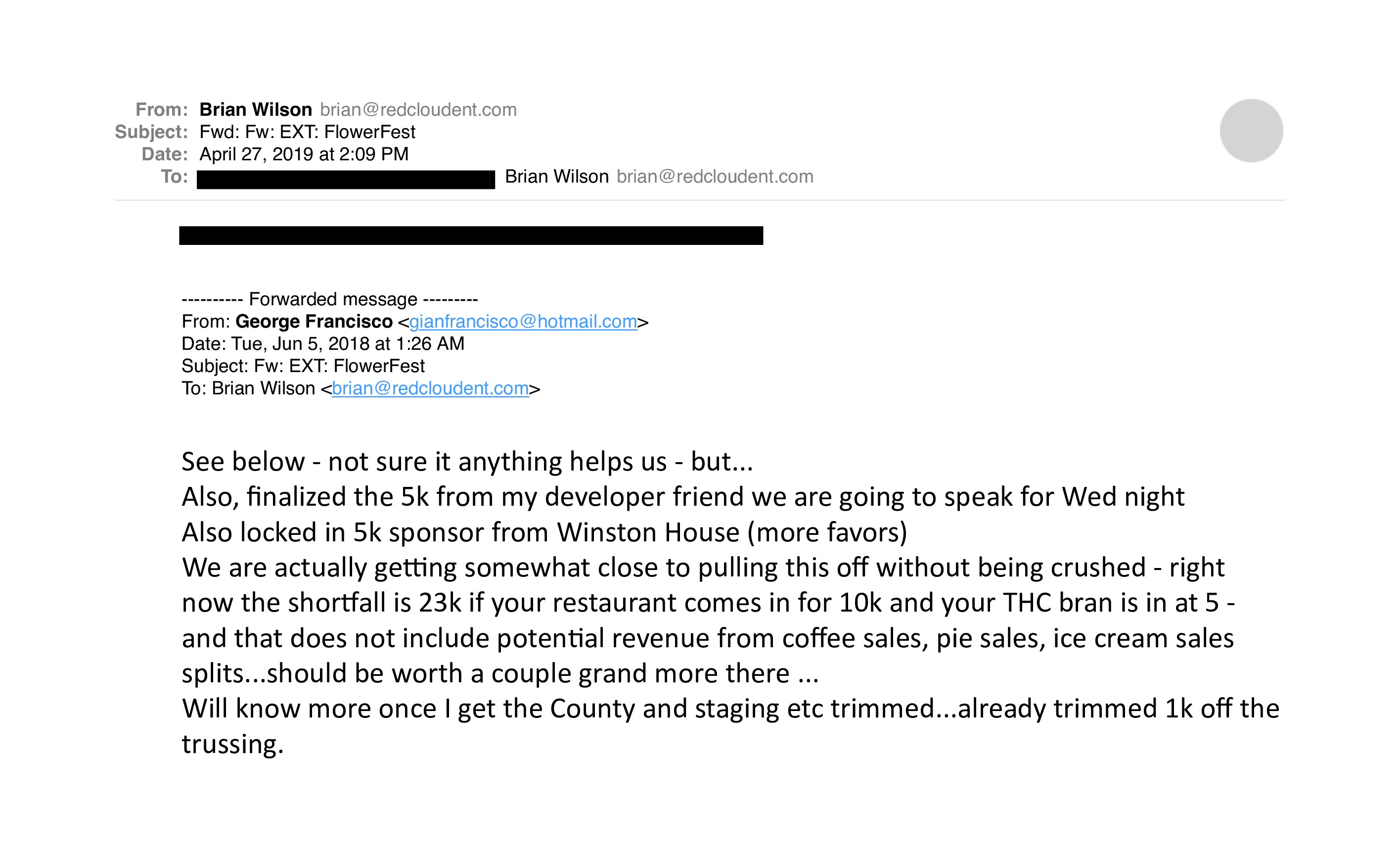