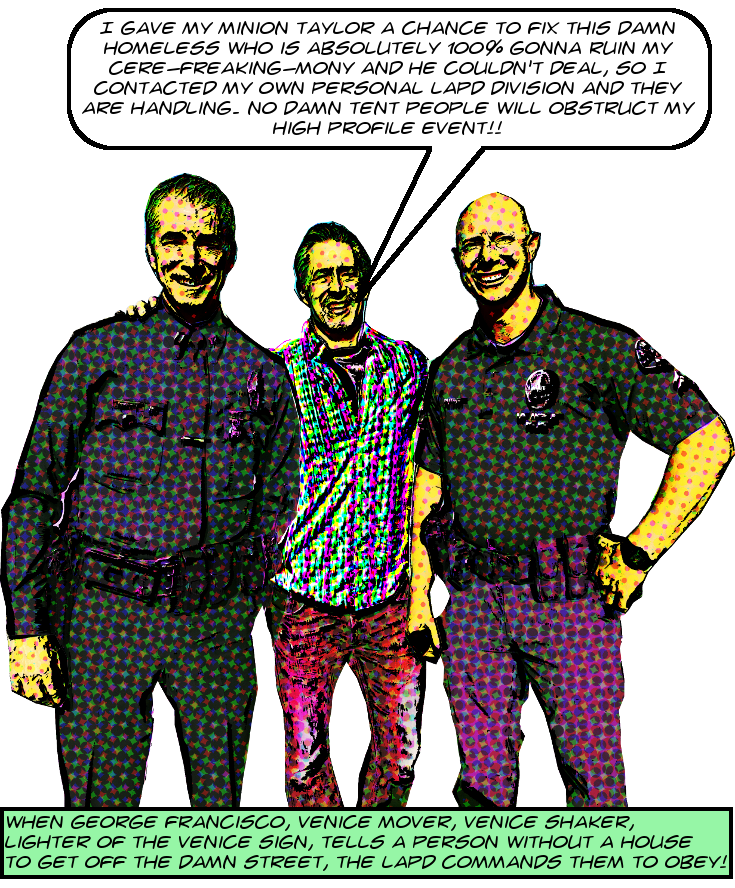 Ask the City’s powerful and you’ll hear a familiar story. That breaking up and cleaning out homeless encampments promotes health, promotes safety, is even good for the people whose homes are being destroyed. Just ask Estela Lopez, the executive director of the Downtown Industrial District BID, who will tell you that these cleanups are good for the very people who are getting cleaned up. Ask famous-on-Facebook homelessness hero Betsy Starman, who’ll tell you that even arresting homeless people is for their own damn good. Ask LAPD’s HOPE team, who will tell you the whole thing is for the benefit of the victims.

Heck, ask zillionaire property owner, serial plagiarist, and erstwhile president of the board of directors of the whole damn Hollywood Property Owners Alliance John Tronson, who will tell you that arresting the homeless isn’t just necessary to help them, but it’s actually good for them. Ask Tronson’s once-upon-a-time BID Patrol minion Mike Coogle, who at one point responded to a social worker’s worries about a man who wasn’t 5150-eligible but who she still wanted to lock up with an offer to arrest him as much as possible so that eventually warrants would issue and she would be able to help him whether he wanted it or not. How’s that for arrests being good for the homeless?!

And this is a good narrative, I guess, or at least a useful one. It lets people who just want the homeless moved out and away and don’t give a damn about the pain and destruction to feel like they’re helping people while helping themselves, to feel like they at least appear that they do give a damn about human suffering. It strains the credulity of the sane, though, to believe that arresting homeless people, that breaking up their camps and destroying their possessions, is actually good for anyone, let alone the people it’s happening to. Or even that anyone actually intends it to be good.

There are just too many episodes like the one about CD13’s scheduling a cleanup because some zillionaire landlord had a property inspection coming up or the one about CD14 arranging a cleanup in advance of a movie company’s planned filming. It sure seems like, no matter what the lies the powerful are telling themselves in the morning mirror, the motives for evicting the homeless are really not humane at all.1

And today I have another example, albeit with a twist this time, which is the involvement of Garcetti homelessness staffer Brian Buchner who, if not humane, at least understands how to manage appearances. The whole story is told in this email conversation between CD11 field deputy Taylor Bazley,2 Brian Buchner, Dominic Choi, Emada Tingirides, and Garcetti’s latest magic bullet, the Unified Homelessness Response Center. The subject is universally-reviled-by-sane-people Venice zillionaire George Francisco and his infernal Venice Sign comma lighting ceremony therefor, scheduled last year for Saturday, December 1, 2018. You can read the special event permit here.

And the problem? Well, there was a human being living on the sidewalk where this very special event was to take place. And George Francisco wasn’t having it. So he had Taylor Bazley email a bunch of LAPDs and ask the eternal burning question, which is how can we get the homeless person out of the way of the zillionaire party? Turn the page for a transcription of this and the rest of the discussion, and don’t ever believe them again when they tell you they’re arresting homeless people for their own damn good.

There is a small single person encampment at the site of this special event (Windward and Pacific in Venice) this Saturday that would obstruct the high profile neighborhood event. What is our capacity to command the personal property be moved in advance of the event?

And this is when Garcetti’s homelessness czar, Brian Buchner, weighed in, albeit without actually responding to Taylor . Evidently he receives email sent to uhrc@lacity.org:

FYI; Taylor from CD11 is asking for a particular kind of intervention (see below) and only included Adrian in the request. You may want to check-in so PD doesn’t get involved in “commanding” movement of personal property at Taylor’s request.

And as suspicious as I am of the whole City crew at this point, at least Brian Buchner is thinking clearly about consequences, unlike most of the rest of them. His two correspondents are Dominic Choi, who’s LAPD’s homelessness coordinator, and Emada Tingirides who, at least according to her Twitter profile, runs the Unified Homeless Response Center.

And because Taylor is asking Officer Adrian Maxwell to get involved, Buchner’s worried that he actually will get involved, so he tells some superior officers to watch out that he doesn’t get involved. Which is all very prudent and how things are supposed to work and so on. But it turns out that it was all in vain. George Francisco, sneaky little rat that he is, jumped the chain of command and went straight to his local cop buddies at Pacific Division, maybe even the ones he’s hugging up in the picture up there, and I’m guessing they dealt with it for him, although the record ends with Dominic Choi’s explanation:

George already contacted the Division. They are handling.

But whatever happened, whatever sense Brian Buchner tried to talk to these people, none of it mattered in the end, because whatever happened, there were no tents on the sidewalk during George Francisco’s high profile neighborhood what ever the hell it was. And that’s how these stories always end around these parts, along with these posts about them.

Image of George Francisco and his two pet cops is ©2019 MichaelKohlhaas.Org and you know you wanna look at this GF!