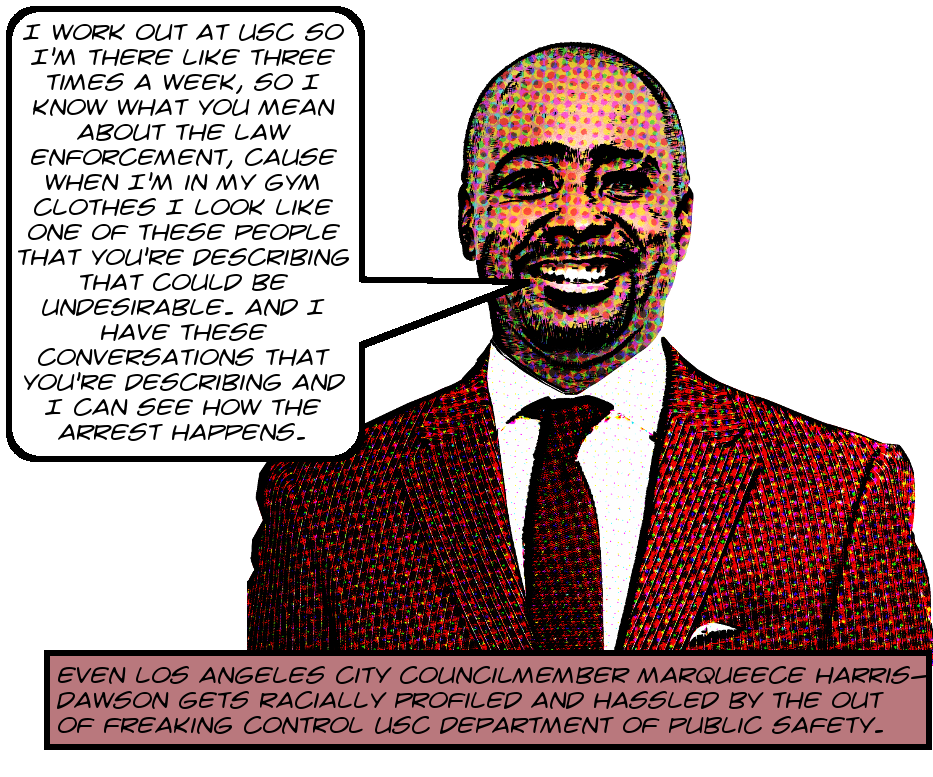 The University of Southern California calls its security guards the Department of Public Safety. It seems to be not so widely known that, with the explicit consent of the City of Los Angeles, USC security operates on public streets in a huge area surrounding the campus. And as you might expect from a troublesome and troubled institution such as USC their policing is both troublesome and troubled. It’s demonstrably racist and demonstrably outside the bounds of what the law allows them to do as security guards. The problem has been covered for years now by the incomparable Sahra Sulaiman of Streetsblog Los Angeles. See e.g.:

And if you still don’t believe that USC DPS is out of control, watch this video of Los Angeles City Councilmember Marqueece Harris-Dawson responding to a constituent concerned about their racist policing by revealing his own personal experiences with their racial profiling. There is, of course, a transcription after the break.1

And this revelation raises a really serious question. If even Marqueece Harris-Dawson gets treated like an “undesirable” by USC DPS, why hasn’t the City of Los Angeles done something to stop them? Why hasn’t Marqueece Harris-Dawson done something to stop them? The logistics wouldn’t be hard. What’s hard is finding political support for a solution.

And whether out of deference to his colleague at CD9, Curren Price, in whose district USC situates, or out of respect for the wants and needs of the zillionaires who eventually come to control every council office, Harris-Dawson has made his choice to do nothing. It may not be possible to explain, but it’s so commonplace a situation in LA politics that it doesn’t really need explanation.

Transcription of the video:

Unidentified constituent: …watch as their bona fide and backed lynch mob that targets certain people, and they work with the police, they target certain people that are quote “undesirable” and they kick them out of the area.

Marqueece Harris-Dawson: So thank you for making it plain and laying it out. I appreciate what you’re saying about USC. You and I are the exact same age. The first house that my family owned when they came from Louisiana to Los Angeles was in the USC neighborhood. They lost it as a result, we lost it as a result of USC expansion. And I work out at USC, so I’m there like three times a week. So I know what you mean about law enforcement, cause when I’m in my gym clothes I look like one of these people that you’re describing, that might, that could be undesirable. And I get, you know, I have the conversations that you’re describing. And I could see how the arrest happens. So I’ll be honest with you. USC is tough. The community benefits process, I was a part of it as well. I wasn’t on the City Council at that time, I was an executive director of Community Coalition. I also left at the same exact time that they said you have to sign something saying you can’t sue if you are in the room for this process. I left because I knew that Community Coalition in the future might want to be part of a lawsuit or I might want to be part of a lawsuit. And I will tell you, one of the things I will say, that doesn’t fix this but it’s something to remember in the future, cause that’s not the last development that will happen, in my district I do not encourage community benefits agreements. The reason why I don’t is cause the recourse to them…

Image of Marqueece Harris-Dawson is ©2019 MichaelKohlhaas.Org. Fixed it right up outta this lil fellow here!