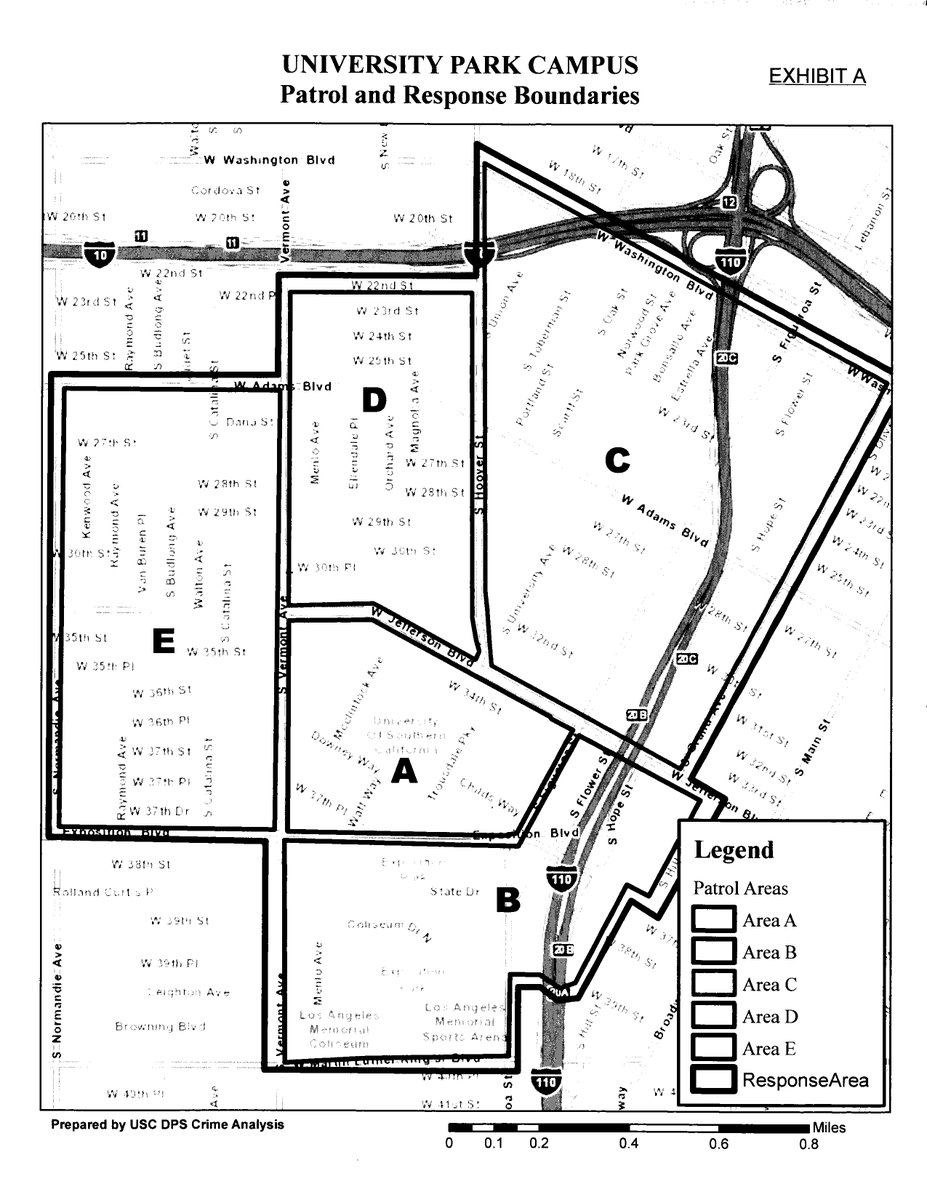 So it turns out that security guards at private universities can actually be peace officers under California law if certain conditions are satisfied. This is authorized by the Penal Code at §830.75, which lists the fairly minimal conditions. They include a requirement that “[t]he institution of higher education and the appropriate local law enforcement agency have entered into a memorandum of understanding.” Once the conditions are met, the law allows the security guards to act as police officers on public property within a mile of their campus.

And the University of Southern California has taken full advantage of this opportunity, entering into the appropriate MOU with the Los Angeles Police Department so that its security guards, collectively known as the Department of Public Safety, have the arrest power and are allowed to exercise it within the boundaries of the map shown above. I obtained a copy of this MOU from LAPD under the CPRA, and it’s well worth reading.

If you’re paying attention at all you’ll have heard that this situation, with USC policing a vast off-campus area in neighborhoods whose residents are mostly poor, mostly black or brown, is intolerably abusive. Sahra Sulaiman, for one, has been writing about it for years on Streetsblog. See e.g. this 2013 overview and this more recent description of yet another appalling incident.

When the LAPD is involved in activities like this, well, it’s not so easy to stop them, but it is at least possible to use the Public Records Act to try understand what they’re up to. This is not so clearly possible with USC, since they’re a private school and not prima facie subject to the CPRA.1 But the MOU does provide for some transparency about USC operations.

In particular take a look at Article 5, which requires all kinds of reporting about police activities by USC, all of it to be submitted to LAPD.2 USC DPS is required to submit reports of significant incidents, daily reports of calls, weekly crime statistics, monthly reports of all activities pertaining to the exercise of the powers granted by the MOU, and other stuff besides.

So naturally I asked LAPD for copies of all of these reports from 2018 and 2019 under the CPRA.3 And imagine my surprise when the LAPD told me this afternoon that they didn’t have any records. They even said that they asked Southwest Division to look for them, which was the right thing to do as they’re the designated recipients under the MOU.

So if LAPD Discovery is telling the truth and no one actually has copies of all these reports that USC is supposed to submit, then USC is in violation of the MOU and they certainly ought to stop patrolling off-campus immediately and have all the powers granted to them under its terms suspended until they come back into compliance.

This isn’t just some kind of technicality, either. If USC DPS is going to operate on public property, detain and arrest citizens of Los Angeles who aren’t remotely interacting with USC property or employees, and so on, then we have a right to keep track of what exactly they’re up to. If they actually haven’t been submitting these reports, or if LAPD isn’t retaining them or is hiding them, then it’s impossible for us to understand USC’s operations on our streets, which is unacceptable.

On the other hand, obviously, it’s possible that LAPD is either lying or mistaken, either of which would be completely not at all surprising to anyone who’s dealt with them before. So I asked Southwest Division to put me in touch with whoever is their USC liason, and I asked USC senior vice something or other Todd Dickey, who signed the most recent amendment to the MOU, to please let me know what’s going on. If and when I hear back from them well, you’ll read about it here. Meanwhile, turn the page for all the transcriptions.

The reporting duties mandated by the MOU:

The proper recording of information and exchanging information is critical to the process of deploying resources both inside and outside the university. There is also a need for compatible record keeping and UCR reporting. This reporting requirement is further identified in the following paragraphs:

(A) USC Administration upon becoming aware of a significant incident occurring within the defined Geographic Area of Responsibility shall notify, without unnecessary delay, the USC DPS and/or LAPD. A significant incident is defined as an act or omission to act which would constitute a felony or misdemeanor under California law or any other incident of a sensitive public safety or hazardous nature.

(B) The USC DPS, upon becoming aware of a significant incident, shall complete the appropriate crime report(s), and without unnecessary delay submit the report(s) to the on-duty Southwest Watch Commander, or if outside Southwest Area, the Area of occurrence, for approval. Upon completion and approval, a copy of each crime report and/or arrest report or RFC completed by USC DPS personnel shall be forwarded to the Southwest Detective Division Commanding Officer without unnecessary delay. In those cases where the incident constitutes a complex felony under California law or a crime of violence involving the use of a weapon, or a reportable incident as defined below, USC shall immediately notify the Watch Commander of the appropriate patrol division where the incident occurred.

Note: USC DPS personnel shall not conduct either the preliminary or follow-up investigations of any “reportable incident” described below. In those instances, immediate notification shall be made to the Southwest Area Patrol Watch Commander or depending on the emergent circumstances, any on-duty, sworn LAPD personnel.

A reportable incident shall include but not be limited to the following:
• Homicide
• All crimes where shots were fired
• Sexual assaults (see below)
• Bomb threats
• Crimes or incidents which are motivated by hatred due to race, religion, or ethnic group
• Injuries where City liability may be an issue
• Suicides and attempt suicides
• Hazardous material spills or contamination
• Theft over $5,000.00
• Incidents that if known would be considered newsworthy or could have a significant impact on the City of Los Angeles.
• Any incident in which the LAPD determines to be in the best interest of the City of Los Angeles to handle.

The crime of rape, or attempted rape, is a serious criminal act, which requires the immediate investigation by LAPD uniformed or detective personnel.

While it is understood that some victims may be hesitant or reluctant to cooperate in the investigation of these crimes, it is imperative that a preliminary investigation be conducted to identify, if possible, the involved suspect(s). Rape is a crime of violence and suspects who commit this type of violent act often are repeat offenders. There is an inherent obligation to try to prevent future occurrences.

The term sexual assault is intended to include those criminal acts described in the California Penal Code and the California Welfare and Institutions Code. It includes the crimes of rape, attempted rape, sodomy, oral copulation, indecent exposure, and child, molestation. Whenever a crime of a sexual nature is reported to USC DPS [security] personnel, notification shall immediately be made to the appropriate geographic area Watch Commander who will make the appropriate detective notifications. While the first concern shall be for the well being and medical treatment of the victim, the reporting of the incidents to LAPD personnel shall not be delayed because of such treatment or request for such treatment. The reluctance of the victim to report the crime, identify the suspect(s), or proceed with the prosecution shall not be a factor in the reporting policy of USC DPS personnel.

(D) Any general orders issued by USC DPS pertaining to USC response to, or reporting of crimes will be made available upon request to the CO, SW Area for appropriate LAPD review and approval;

(E) All report forms used by the USC DPS for the reporting of crimes shall be submitted to the Chief of Police for approval, to insure compatibility with the Los Angeles Police Department’s report forms.

(F) Weekly crime statistics shall be maintained and supplied to SW Detective Division by USC DPS depicting specific locations of reported crimes on the campus.

(G) During the term of this MOU, USC shall immediately report all discharges of firearms, (accidental, negligent, or intentional) involving USC DPS personnel to the LAPD and cooperate, as required, with the investigation of the firearms incidents conducted by the LAPD. The LAPD will investigate the criminal aspects of a firearm discharge. The USC DPS will be responsible for administrative matters associated with the discharge of firearms.

(H) All records and files of enforcement activities granted by this MOU to USC personnel shall be open for inspection to designated members of the LAPD.

(I) All records of complaints or investigations of complaints lodged against USC DPS personnel arising from the exercise of authority granted by this MOU shall be open for inspection and when necessary investigation by designated members of the Los Angeles Police Department.

(K) USC DPS shall submit monthly reports to the concerned Area commands on the activities of officers at USC pertaining to the exercise of power granted by this MOU.

(M) Any use of force by USC DPS personnel related to the authority granted by this MOU shall be documented and explained under the heading of “Use of Force” in the appropriate report (i.e. Arrest Report, Crime Report, USC Daily Occurrence Report).

Note : All of the above described reports, statistics, and records shall be provided unless otherwise agreed to by the LAPD.

a. 2018 and 2019 daily occurrence reports from USC DPS to LAPD as required by Article 5 Paragraph (D) of the MOU between LAPD and USC.

c. All firearms discharge reports as required by Article 5 Paragraph (G) of the MOU from 2009 through 2019.

d. All records of complaints and investigations of complaints lodged against USC DPS personnel falling under the categories made releasable by SB1421 as available to LAPD per Article 5 Paragraph (I) of the MOU with no time limitation. Note that as PC 830.7(b) states that USC DPS officers are not peace officers these are not covered by the court’s restraining order and may therefore be released by LAPD.

e. All monthly reports from USC DPS to LAPD as required by Article 5 Paragraph (K) of the MOU from 2009 through 2019.

We have reviewed your request …

Your request was made pursuant to the California Public Records Act (the Act). The Department is cognizant of its responsibilities under the Act. It recognizes the statutory scheme was enacted to maximize citizen access to the workings of government. The Act does not mandate disclosure of all documents within the government’s possession. Rather, by specific exemption and reference to other statutes, the Act recognizes that there are boundaries where the public’s right to access must be balanced against such weighty considerations as the right of privacy, a right of constitutional dimension under California Constitution, Article 1, Section 1. The law also exempts from disclosure records that are privileged or confidential or otherwise exempt under either express provisions of the Act or pursuant to applicable federal or state law, per California Government Code Sections 6254(b); 6254(c); 6254(f); 6254(k); and 6255.

We submitted your request to the Los Angeles Police Department’s (LAPD) Southwest Division. The Division did not find any records responsive to your request. The records you are seeking are not LAPD’s records and LAPD is not the custodian of these records. You may wish to contact the University of Southern California’s Department of Public Safety and inquire.

If you have any questions, please respond to this email.