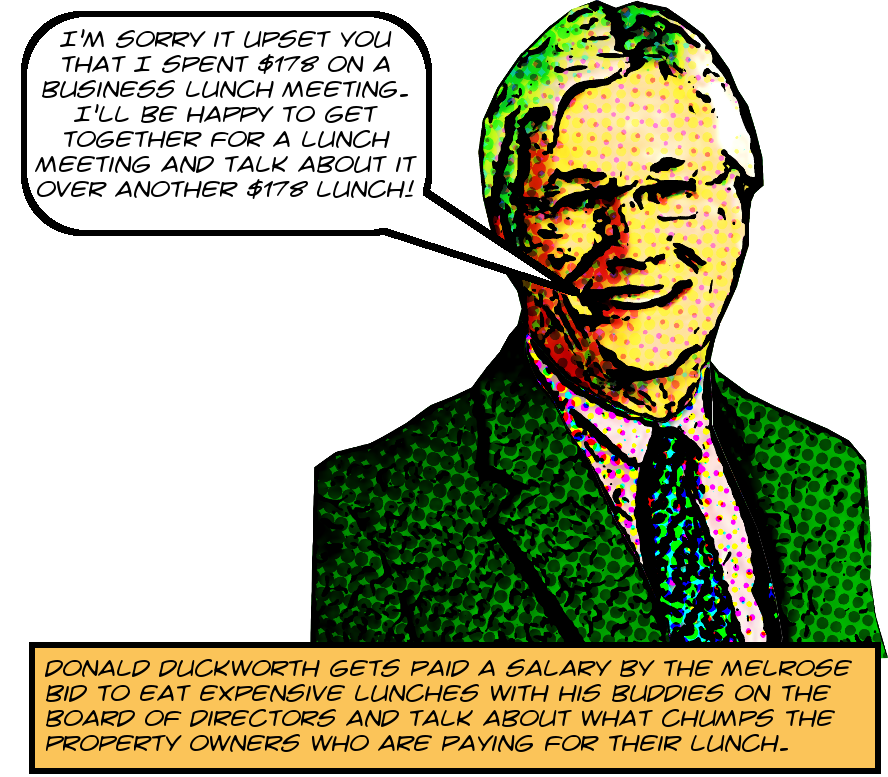 It’s been a damn month now since last I wrote about BIDological freak show specimen Donald R. Duckworth, the pirate king1 of the Melrose Avenue Business Improvement District. But it’s El Duckie’s own damn fault that he’s not getting the publicity he craves from MK.Org.

For whatever reason, the baleful influence of Carol Humiston, his own mulishly porcine intransigence, something as-yet-unguessed-at, he is chronically unable to comply with the tender mandates of the California Public Records Act. And I can’t very well mock him without public records, the very fuel and the flavor of MK.Org-style mockery.2

But recently I managed to lay hands on an interesting set of goodies, which are all of El Duckie’s requests for reimbursement from Melrose BID coffers for the last few years.3 I originally asked for these because last summer the property owners of Melrose were in open and fiery rebellion against the Duckworthian regime and one of the underlying causes was Duckworth’s irrepressible profligacy.

If you don’t want to or can’t read the PDF, there’s an html conversion at the end of this post.4 And it reveals that Duckworth and his BIDdie buddies, most especially the notorious Weintraub gang, Deny and Sylvia, are indeed basically flinging the property owners’ assessments to the winds like rain.5

Just for instance, on January 19, 2018 the BID bought Duckworth, the Weintraubs, and a couple other BIDdies lunch to the tune of $122.09. Sure, that’s not over the top for lunch for five, but why is the BID buying lunch in the first place? I have to go to work meetings all the damn time and no one buys me lunch. But I, for my part, have to ask an accountant for permission. Donald R. Duckwalk just has to ask Deny Weintraub, and Deny Weintraub is right there at the trough with him.

Or see on November 29, 2017 when The Duckster put in for $75.07 for a “work session” with Kim Sudhalter. Kim Sudhalter is the BID’s social media flunkie, so she already gets paid for the work she does. As does Donald R. Duckandcover. So what was the 75 bucks for? More food for the work session? The usual arrangement, Duckfellow, is to pay for your own food when you’re working.

And there are plenty of these instances, where Duckworth, the Weintraubs, and sometimes an unindicted co-conspirator or two, will go out to lunch at some ritzy place and charge it off to the BID. But the most egregious of these are the ones that are labeled as committee meetings. Because, as we know, the BID is bound by the Brown Act, and the Brown Act has very strict rules about where and how committee meetings can be held. And it’s likely that these violate them.

In particular, on September 1, 2017 Duckworth, the Weintraubs, and Kim Sudhalter spent $133.89 on lunch at a committee meeting at Off Vine, a super-ritz joint near the southeast corner of Vine and Sunset. This is highly problematic, friends, and turn the page to see why!

First of all, let’s establish that BID committees are in fact bound by the Brown Act. The Brown Act at §54952 lists the kinds of bodies that are subject: commission, committee, board, or other body of a local agency, whether permanent or temporary, decisionmaking or advisory, created by charter, ordinance, resolution, or formal action of a legislative body. Now, there are some exceptions to this, and we’ll talk about them below.

Off Vine is not in the Melrose Avenue BID. In fact it’s miles away. This is a problem because the Brown Act at §54954(b) states very clearly that Regular and special meetings of the legislative body shall be held within the boundaries of the territory over which the local agency exercises jurisdiction… This requirement also has some exceptions.

Like they can meet outside their boundaries if they have to go to court, or a judge orders them to, or they’re going to buy property and they have to go inspect it, or if they don’t have any place to meet that’s in their boundaries. Pretty clearly none of these apply to lunch at Off Vine, although I confess that I didn’t check into whether they were under court order.

And that’s not all! The Brown Act at §54953(a) famously requires that all meetings be open to the public. And conceivably it could be argued that Off Vine is open to the public in case we all wanted to attend the meeting, although I have my doubts about how that ritzy restaurant would feel if a bunch of us descended on it and wanted to sit around their expensive tables, bleeding their waitstaff of tips, and not even ordering coffee.

And they couldn’t even force us to order coffee, or anything, for that matter, because the Brown Act at §54961(a) states that No legislative body of a local agency shall conduct any meeting in any facility that prohibits the admittance of any person, or persons, on the basis of ancestry or any characteristic listed or defined in Section 11135, or which is inaccessible to disabled persons, or where members of the public may not be present without making a payment or purchase.

The North Figueroa Association, managing corporation of the egregious, infamous, shameful, horroristical Highland Park BID, is famous for its despicable and illegal exploitation of this crapola technicality. The Hollywood Property Owners’ Alliance, another basket of BIDdie deplorability, also uses it regularly to evade public scrutiny.

So maybe that’s the Melrose BIDdie defense here? But if so, why call the damn meeting a committee meeting in the first place? Especially in a document which, at the time it was created, no one involved had any reason to suspect that I would ask for it and publish it to the world.

I personally can’t think of any reason other than to prepare before it was needed a defense to the probably inevitable charge that Duckworth and the Weintraubs were, and are, looting the treasury whose oversight has been entrusted to them, spending it $133 at a time on ritzy restaurants. Maybe they were thinking that when they got caught they could just say but no! Committee!

Perhaps they thought that that would mollify the pitchfork bearing hordes angry that their coercively collected assessments were being unwillingly ripped from their wallets not to improve their community, whatever that might even mean for freaking Melrose Avenue, but to pay for fancy lunches for Deny and Sylvia Weintraub and their hatchet-faced buddyboy Donald R. Duckworth. Well, and maybe it’s even working, who knows!