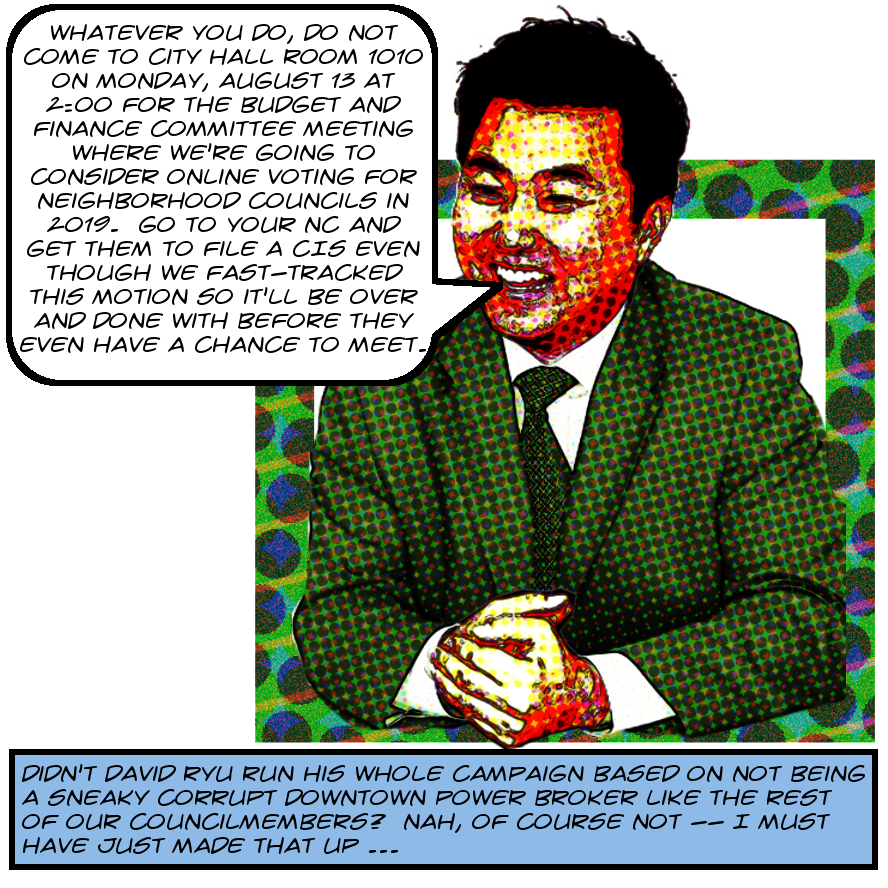 Recall that because Jose Huizar just cannot give up on online voting in neighborhood council elections after he used it to such zillionaire-jeans-creamsing effect in 2017, he, David Ryu, and Paul Koretz introduced a motion on August 2, 2018 ordering the City Clerk to report back on the feasibility of running a 2019 pilot program involving 10 councils.

And now, in a move that adds further layers of weirdo insanity to the whole situation, the motion has been scheduled for consideration this very Monday, August 13, 2018, at 2:00 p.m. at the meeting of the Budget and Finance Committee in City Hall Room 1010. Here’s the agenda. This kind of fast-tracking is virtually unheard of with the City Council. On this schedule it’s extremely unlikely that neighborhood councils, who are of course the most concerned with and knowledgeable about the issue, will have time to meet and file community impact statements. What are Huizar and his creepy co-conspirators trying to hide?

Finally, though, they didn’t manage to sneak it past everyone. Stalwart Los Angeles activist and heroine Laura Velkei, neighborhood councilor and guiding genius behind the essential Department of Neighborhood Empowerment watchdog group DONEwatch, wrote the Council a blistering letter opposing this abortion of a motion.

Turn the page for a transcription of the whole thing, and consider sending your own letter as well. See you Monday, activist friends!

Many of us who have sat before you and sent numerous emails and letters regarding the ill conceived push to move online voting into the NC system, were utterly appalled and deeply disappointed that this motion was moved forward to budget. Councilman Ryu, 60% of that is directed at you for moving this to Budget. It was beyond disheartening to see this move with your stamp of approval.

Never mind that no other body in the state is legally allowed to conduct voting in this fashion, never mind that the country has been plagued with voter suppression and hacking and never mind that the credibility of the petitioner is now even at issue with new documents coming to the surface that tie lobbyist activity to Mr. Huizar’s decision to move online voting forward soley for the SR NC election. To date. No one at DONE has been able to reconcile the voter turnout numbers nor has anyone been able to justify or explain a single contradiction that came out of their office of which for me personally were 9.

We are now on Mr. Huizar’s 3rd attempt to move this turd forward. Why? NC’s oppose it, the Budget Advocates did not fund it, it was proven to NOT increase voter turnout, it favors one block of constituents and disenfranchises another (it is not just the homeless. The poor, seniors, immigrant communities are all impacted) and it continues to be plagued with technical and human failures by the vendors own admission.

The contract with everyone counts was for 900,000 and expired on June 23rd. Over 350,000 of that contract was flushed down the toilet and despite the train wreck GM Liu stood before you claiming success.

While I appreciate Mr. Huizar’s desire to “empower” his elite DTLA supporters, the rest of us understand what it means to actually show up for our communities.

Attached is the writ filed by Skid Row NC Formation Committee Case No. BS 170257. I have now heard of 4 other groups planning to serve the City over unaddressed NC issues, online voting and now harassment of stakeholders and Board members by DONE management. One letter to the City Attorney expires today and will shortly move to writ.

While my grant for 2k to trim trees in our only dog park was rejected because its on “private property” (despite prior approvals), we’re going to approve 215K for a proven failure; an undemocratic voting system that can be manipulated by opening an excel spreadsheet?

215K (and 900K for that matter) would be huge boost for community amenities.

I implore you to vote against any further funding of online voting for the NC’s and reject this motion to fund.

Image of David Ryu is ©2018 MichaelKohlhaas.Org and is somehow related to this lil Ryu right here.