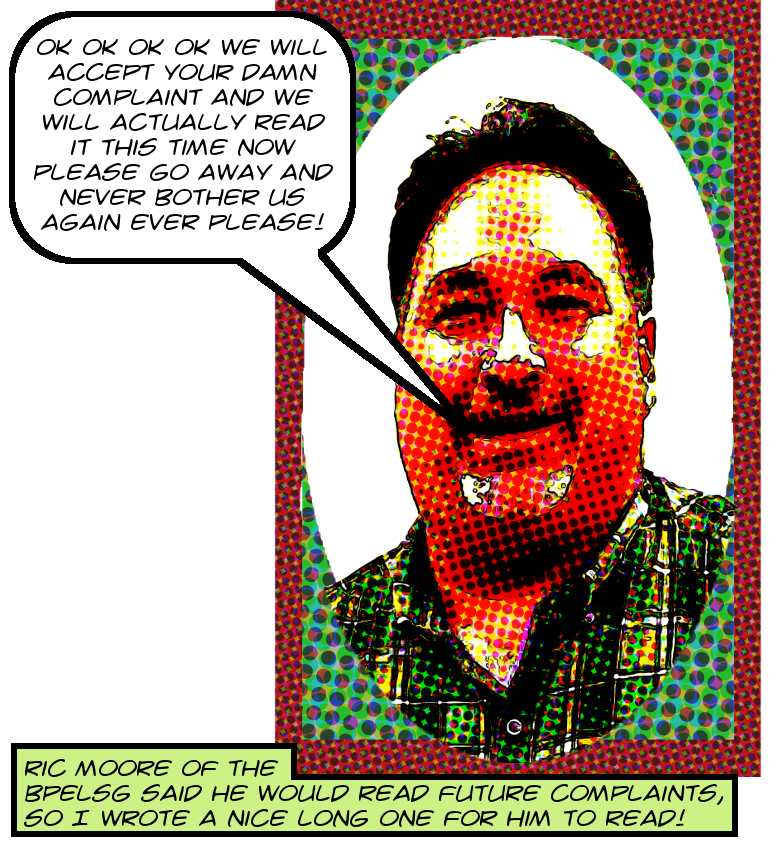 Here’s a quick summary of the background. BID formations are required by the Property and Business Improvement District Law of 1994 to be supported by a report prepared by a licensed engineer.1 Engineer Ed Henning wrote the report for the ill-born Venice Beach BID.2 The California Board for Professional Engineers regulates the engineering profession and can investigate allegations of incompetence or negligence. Ed Henning wrote the engineer’s report for the Venice Beach BID and did an awful, negligent, incompetent job of it.

A complaint was made against Henning but was rejected by the Board without being read because they claimed that writing BID reports didn’t constitute the practice of engineering. After a great deal of discussion with BPELSG executive officer Ric Moore, he agreed that in the future his office would not dismiss such complaints unread.

Well, given this assurance it seemed worthwhile to me to spend time writing another complaint against Henning, whose work is universally acknowledged to be ultra-shabby,3 And that’s just what I did! You can grab a copy of the whole thing right here on Archive.Org, and turn the page for selections and little bit of discussion!

It’s some kind of universal law of bureaucracy that agencies will first reject complaints by claiming that they have no power to deal with them. Thus, in complaints generally, it’s a good idea to head off this sure-to-be-made argument by providing the recipient with your reasons for thinking that they have the power to consider the issue. The arguments I used in this complaint are pretty thoroughly discussed in this old post on the matter.

For reasons that are too technical to go into here, BIDs are only allowed to fund benefits that are “special” to the property owners paying the assessments. E.g. this requirement is why that judge dissolved the arts district BID in 2013 for promoting tourism which seemed to be a general benefit. Engineers are required to measure the proportion of benefits to be provided by the BID which are general and then the assessments get discounted by that factor.

One measure of this quantity that seems to be popular among BID engineers is the proportion of people passing through the BID boundaries who don’t intend to do business there. The idea seems to be that if people are just walking through they do still get some good out of the cleaner sidewalks and the security guards, and the BID owners are paying for that but failing to benefit from it because the people aren’t there to buy stuff.4

Whether or not the just-passing-through proportion measures general benefits is an open question, but clearly, obviously, calculating that proportion is an empirical matter that will vary wildly from BID to BID and must therefore be decided by actual fact collection. Interestingly, BID engineers other than Henning do intensive studies to calculate this figure. Henning, on the other hand, copy/pastes a statement like the following into every single one of his reports:

Assessment Engineering experience in California has found that generally over 95% of people moving about within BID boundaries are engaged in business related to assessed parcels and businesses contained on them within the District, while the public at large “just passing through” is typically much less than 5%.

He then proceeds to make an unsupported claim about the proportion for the BID at hand based on his experience. For instance, with the Venice Beach BID he stated:

That is, without any evidence whatsoever he’s claiming that only one out of a hundred people who set foot in the Venice Beach BID each day are not there to do some kind of business with BID properties. This seems unlikely, but more importantly it seems impossible to establish without data. In the context of Henning’s other engineering reports, discussed at length in my report, the words stay the same but the figures vary wildly.

Since the percent of people passing through putatively measures the general benefit provided, and since the proportion of general to special benefit significantly impacts the actual dollar amount paid by the assessees, this figure is important and oughtn’t to be just made up. And it turns out that the American Society of Civil Engineers has a code of ethics. And the code of ethics5 contains the following salient requirement:

The point is that if one is going to pronounce on an empirical matter it’s certainly “relevant and pertinent information” as to how one arrived at the figures involved. Henning’s colleagues in the assessment engineering community take up a great deal of space in their reports detailing the data on which they base their opinions. Henning does not. This is a violation of the ASCE code of ethics, and therefore is the kind of fraud, negligence, or incompetence which the BPELSG is meant to handle.

That’s a small sample of the kind of arguments I made, but I recommend you read yourself. If PDFs are too irritating to read on your phone, here’s a link to a (machine)-transcription of the whole complaint. Anyway, stay tuned for more info. Regardless of whether the BPELSG will actually do anything to Henning, and I more or less think they will not, we ought to, if he’s as good as his word, get a detailed response from Ric Moore, which ought to be worth reading.

Image of Ric Moore is ©2018 MichaelKohlhaas.Org. It’s based as usual off this Twitter pic cause dude don’t have many photos of him flying around the internets.