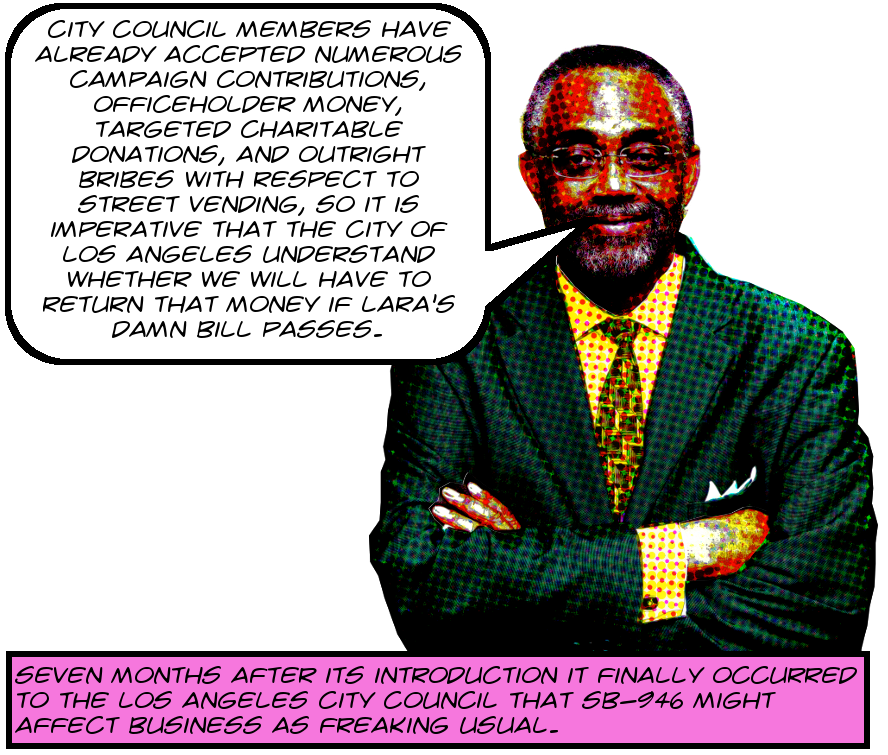 As you’re probably aware, the City of Los Angeles has been grinding away for more than four years now at developing an ordinance regulating street vending, and you can track the tortured permutations in CF 13-1493. When the whole thing started in 2013 it seemed like José Huizar and Curren Price, who kicked off the process, actually intended to develop a sane ordinance to regulate vending in Los Angeles.

But after four bitter years of exceedingly expensive lobbying, racist rhetoric, and generalized hatred and lies by Carol Schatz and BIDs, the whole thing turned into the unholy mess that we’re living with today, with e.g. Councilmembers directing the LAPD to enforce inapplicable laws on an arbitrary targeted basis at the whim of such enemies of civil society as Kerry Morrison of the Hollywood Freaking Property Owners’ Alliance.

This crazed race-to-the-bottom showed no signs of abating, with, e.g., the Bureau of Street Services weighing in just the other day with yet another unhinged series of suggestions on how the proposed ordinance could be made even more anti-human. And it’s this kind of bizarrely laser-focused insistence on punishment, torture, and incarceration of street vendors, who are one of the cultural treasures of this City, that led state senator Ricardo Lara to introduce SB-946, which would impose very strict limitations on how cities can regulate street vending.

Lara’s comments on the bill make it pretty clear that it’s substantially aimed at cutting through the money-obscured fog of the Los Angeles City Council’s inability to pass any kind of law at all while, somehow, continuing to arrest vendors, confiscate their equipment, and so on. But like the Ancient Mariner, who wouldn’t look behind him for fear of seeing the demons hunting him, the City Council has not uttered the teensiest peep about Lara’s bill.

This silence is certainly uncharacteristic of our Councillors, who will famously take a position on everything from nuclear weapons to freaking garage door openers. However, a couple days ago they finally decided to notice the existence of Lara’s bill. They’re so entrapped by various constituencies, though, that they found themselves unable either to support or oppose Lara’s bill.

Instead Huizar and Price introduced a motion asking the Chief Legislative Analyst to figure out what the passage of Lara’s bill, which seems increasingly likely to happen, would mean for the City’s increasingly unworkable collection of carve-outs masquerading as legislation. What’s amazing about this motion, as I said, is not its content, but its very existence. You can, however, read a transcription after the break.

In 2013, the Los Angeles City Council initiated the process to create a program to legalize sidewalk vending. Since then, the City Council has held numerous public hearings on the matter, and voted to decriminalize the act of vending on City sidewalks. The Council approved a policy framework, including permit requirements, rules, and regulations; and requested the City Attorney to prepare a draft ordinance. The draft ordinance is currently pending before Council.

On January 29,2018, Senator Ricardo Lara introduced the Safe Sidewalk Vending Act (SB 946) which seeks to decriminalize vending in California and provides rules that local jurisdictions would have to follow when crafting local sidewalk vending policies. It is anticipated that passage of SB 946 would impact the rules and regulations of the sidewalk vending program that the City is now crafting.

Given the City’s progress in terms of community engagement with all associated parties, the partnerships built with County health officials, and the work of City departments in the development of the City of Los Angeles Sidewalk Vending Program, it is imperative that the Council understand the potential impact of SB 946 on the City ofLos Angeles.

I THEREFORE MOVE that the City Council instruct the Office of the Chief Legislative Analyst, with assistance of City Attorney and any other departments as necessary, to analyze Senate Bill 946 (Lara) and report on its impact to the City’s draft Sidewalk Vending Program.

Image of Curren Price is ©2018 MichaelKohlhaas.Org and is kinda sorta something to this Curren Price over here.