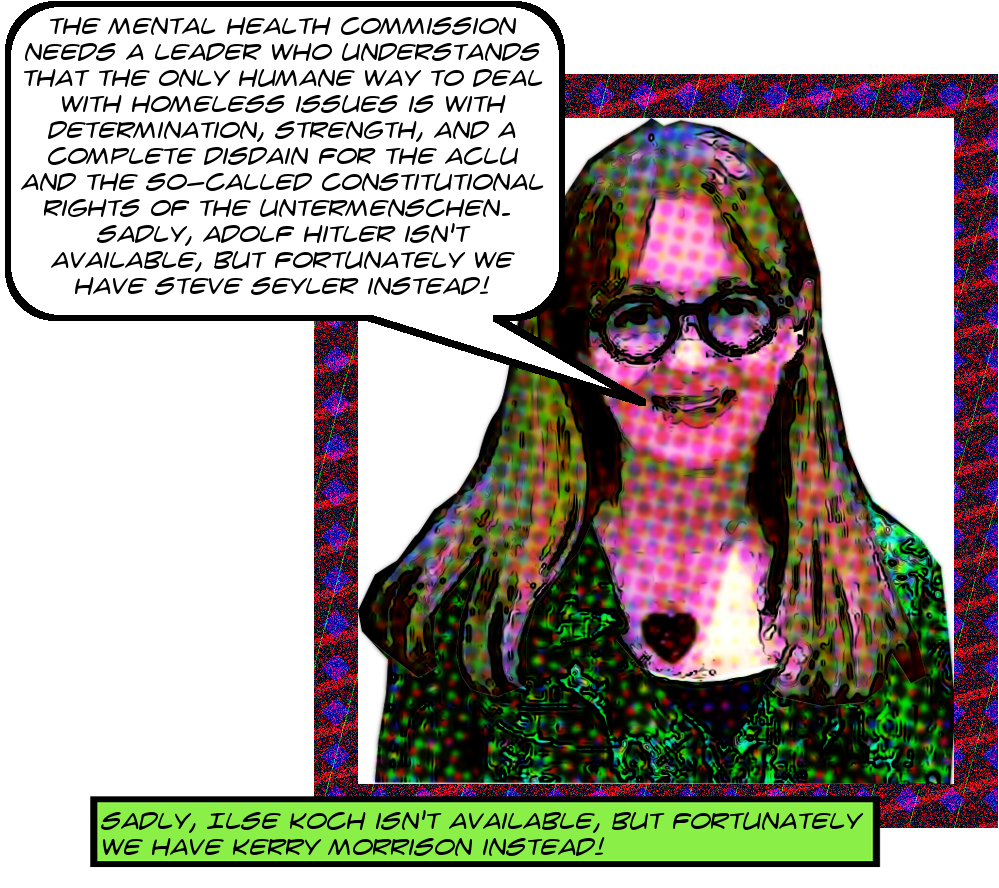 As you’re surely aware, our old friend Kerry Morrison has managed over the last twenty two years to position herself as some kind of neutral expert on homelessness in Los Angeles and thereby to be appointed to all kinds of influential positions even though actually, as executive director of the Hollywood Property Owners’ Alliance, she earns her salary by overseeing the arrest of homeless residents of Hollywood at an astonishing rate as part of her ultimate goal of moving them out of her BIDs by any means necessary.

For instance, as a result, former CD13 rep Eric Garcetti felt free to appoint her to the LAHSA Commission and subsequently to the Prop HHH Citizens’ oversight committee.1 The fact that Kerry Morrison is a politically viable candidate for such appointments despite the fact that her positions differ not at all in any pragmatic way from those of e.g. open advocate for violence, slavering anti-homeless psychopath, and manifestly unappointable-to-anything Mark Ryavec shows the disheartening extent to which she’s managed, through deception and the inattention of journalists to BIDs in Los Angeles, to maintain her public image as some kind of local Mother Teresa figure.2

Kerry Morrison’s genius for reputation-laundering reached a kind of apotheosis in 2016 when she wangled herself a Stanton Fellowship, which is some kind of grant awarded by the Durfee Foundation3 to “allow leaders to test a hunch,” whatever that means.4 And regardless of what it means to the Foundation, it’s also very convenient for Ms. Kerry Morrison as yet another way to fail to acknowledge her paymasters at the BID.5

Given all this it was no surprise to discover that in 2017 Kerry Morrison somehow found her way onto something called the Los Angeles County Mental Health Commission‘s Ad Hoc Committee on LA County’s Board And Care System. When I learned of this in February, naturally I went ahead and sent a CPRA request to the County for all relevant emails. After an astonishing level of obstructionist shenanigans6 they finally released some subset of what I asked for, and you can read the whole set here on Archive.Org.

One moderately interesting item lurking amongst the chaff is the actual report prepared by the Ad Hockies. It’s mostly expected platitudes and stuff, though. The most interesting part is that, as discussed above, Kerry Morrison gives her institutional affiliation as “Stanton Fellow 2016-17” rather than as something honest like, e.g., queen homeless killer for the HPOA.

And there is a lot to write about in this set of records, but the text for today’s sermon is this June 12, 2017 email from Kerry Morrison7 to her gang of yes-people on the Hollywood 4WRD mailing list8 asking if any of them want to be appointed to the County Mental Health Commission. Turn the page for links to the emails, transcriptions thereof, and some commentary!

So here’s the email that kicked it all off:

l am aware that the Los Angeles County Mental Health Commission is looking to fill five vacancies on their citizen, volunteer commission. At least 50 percent of the seats must be filled by individuals with lived experience (either personally, or through family connections). The Commission also seeks to reflect the diversity of the county, and values a variety of disciplines and expertise: law, business, nonprofit, health care, law enforcement, etc. The seats are filled by members of the board of supervisors.

If you would like to know more about what it takes to serve on the commission, or if you have someone in mind who might be a candidate, let me know. I offered to reach assist [sic] the chair in cultivating some names that could be presented to the supervisors.

And all her BIDdie buddies were evidently willing and able to get on the Mental Health Commission and start legislating away the rights of the homeless in Los Angeles County, because a mere 31 hours later, Kerry Morrison informed Caroline Kelly, the Commission Chair, via this email, that she had a little list:

From: Kerry Morrison <Kerry@hollvwoodbid.org>
Date: Tue, Jun 13, 2017 at 7:16 PM
Subject: RE: Board and Care project
To: Caroline Kelly <chairlamhc@gmail.com>

Caroline, I sent out an email to Hollywood 4WRD and I received some TERRIFIC replies. Here is a sampling:

Rev. Kathy Cooper Ledesma, pastor at Hollywood United Methodist Church – she has been very involved in this issue

Antquan Washington, works at the CES matcher for the Mid-Wilshire section of SPA 4, and is a pastor for Broken Hearts Ministry which is street-based work with homeless

We’ll talk more when I get back!

So there’s our old friend Steve Seyler vying at Kerry Morrison’s request to get on the Los Angeles County Mental Health Commission. One problem? He lives in freaking Simi Valley, caucasian cop’s paradise and famously NOT IN LOS ANGELES COUNTY. Does this matter? I don’t know, probably. After all, Kerry Morrison did say that appointments sought “ to reflect the diversity of the county.” Do white cops who can’t even stand to live in the same county as the people they police do that? Arguably, anyway. There are certainly enough of them.

And although that problem ought to take second place to the next problem I’m going to discuss, I’m guessing it would not. After all, where one lives is a technicality, and politicians love to decide things on the basis of technicalities. Which county one lives in is a bright-line matter. There are no nuances. As opposed to, e.g., not only being completely incompetent, but being actively hostile towards the very existence of the mentally ill. One would prefer that kind of thing to be dispositive rather than the random matter of which side of an imaginary line one lives on. But that’s not our world, is it?

And when I say the guy’s hostile and incompetent with respect to mental health issues, let me clarify. This is a guy who believes in involuntary commitment of the homeless because arresting them so freaking many times is a burden on his security guards. His subordinates think it’s OK to repeatedly arrest homeless people in order to build a record leading to involuntary commitment. He believes that conservatorship is a valid tool for moving homeless people out of Hollywood, which is what he and Kerry Morrison are ultimately paid to do.

This is a guy who thinks “we’re here to help you” is a valid first approach to the homeless, to be followed up immediately with handcuffs and an arrest if being nice doesn’t work. This is not a guy who ought to be anywhere near a commission with significant responsibility over how the mentally ill, the homeless, are treated by our public officials. This guy is part of the problem. He is not part of the freaking solution.

This is a guy that Kerry Morrison, self-proclaimed compassionate expert on homelessness and mental health, is trying to insinuate into our County government because this is a guy who thinks in a way she’s comfortable with when it comes to homeless policy. This is the kind of danger our politicians create for us when they let business improvement districts run freaking everything to do with homelessness and mental health. It’s a big problem, and sadly a solution, or even some kind of mitigation, is not readily apparent.

Image of Kerry Freaking Morrison doing what she does is ©2018 MichaelKohlhaas.Org and is floofed over de esta cosa, si se importa.