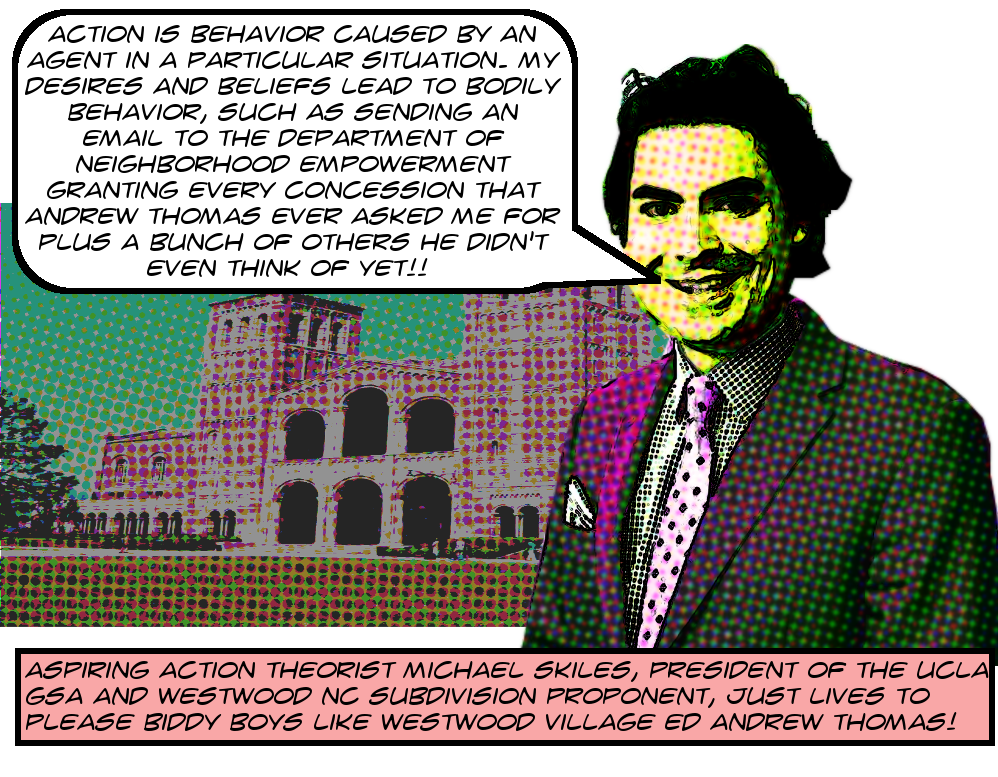 Check out the whole collection here on Archive.Org. In particular, though, for tonight’s sermon, take a look at this little gem (of which there is a transcription after the break), which reveals Andrew Thomas as the puppet master pulling the strings that make Michael Skiles dance. And the tune he’s dancing to is, you’ll not be surprised to learn, all about more seats for zillionaires on the new neighborhood council’s board of directors. And Michael Skiles not only dances to the tune, but he dances like he likes dancing! He’ll go far in academia, friends.

So here’s how it went down. On March 7, 2018, at 11:46 a.m. Michael Skiles wrote to the Department of Neighborhood Empowerment, and told them he was reducing the number of at-large seats to make room for another business seat:

In the course of our outreach to community leaders over the past months, it has become clear to our formation committee that a change would improve our proposed bylaws:

This change was encouraged by business leaders who pointed out that since there are 4/19 business seats on the current WWNC, maintaining that promotion [sic] on our NWWNC would necessitate 3/15 seats. Moreover, they agued [sic] that while others [sic] groups that had seen a reduction in their dedicated seats such as Homeowners should see that reduction because homeowners make up a much smaller fraction of North Westwood stakeholders, businesses actually make up a larger porporortion [sic] of North Westwood’s Stakeholders than Westwood’s stakeholders in general–hence the proportion of their representation should increase or at least not decrease.

So we now ask what would be the most convenient process for us to implement this change? Can I just send you updated bylaws? Should we request this change at our BNC meeting on Tuesday? At our BNC hearing after the election? Does this need to wait until our council is formed? We’d like to implement the change; but absolutely don’t want any delays to result from our doing so.

The very next day, at 5:08 p.m. DONE dude Gibson Nyambura wrote back:

Then, just two and one half hours later, Michael Skiles wrote back with the requisite pinch of sycophancy and the revised bylaws attached. Unfortunately I do not yet have a copy of these bylaws, but I’m working on it:

Please find the attached new Bylaw proposal which has implemented the change from 2 business seats and 3 at-large, to 2 at-large and 3 business.

And here’s where things get really interesting. A few minutes after midnight that night, at 12:08 a.m. on March 9, Skiles forwarded this whole discussion to the ickety-plooey Andrew Thomas, with a brief and familiar note, like how vampire slaves have to check in with their masters at appointed times:

Looks like we’ve made the change to 3 business seats.

And the very next day, Michael Skiles got the smoochy-woochies he was evidently angling for when Andrew Thomas, who does look bitchin-if-creepy-as-hell in those sunglasses, wrote back:

Terrific! Thanks so much for doing this.

So where are the BIDs of Los Angeles? Well, they’re everywhere. They’re not only running the damn neighborhood councils like our friend Ms. Rena Freaking Leddy from the Fashion District BID, another client of Carol Humiston, by the way, they’re actually writing their damn bylaws now. Pretty soon neighborhood councils will just be another project of the BIDs, by the BIDs, and for the BIDs, and ain’t none of it gonna perish from this earth, more’s the damn pity!

Image of aspiring action theorist Michael Skiles is ©2018 MichaelKohlhaas.Org and is mashed up from this lil potato and that other lil taco dorado.