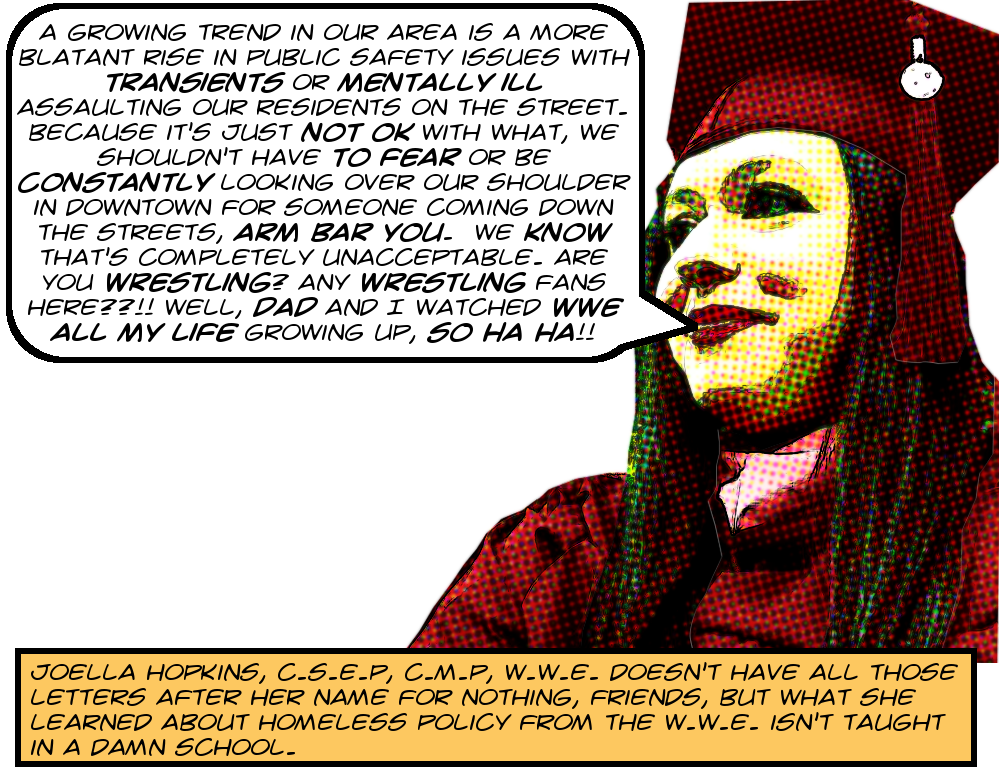 José Huizar was scheduled to speak at yesterday’s South Park BID board of directors meeting, so off I went to record the goings-on for history’s sake. The entire video is here on YouTube and Huizar starts here. His remarks were even more devoid of content than usual, although I’ll have something to say about them soon.1

The CM was, however, late to the meeting, leaving his brand-new Downtown District Director, Carol Schatz’s former event planner, the one and only Joella Hopkins, CSEP, CMP, MBA, to extemporize for a surprisingly long time, starting here. As always there’s a transcription after the break.

The focus at first was on homelessness. In particular on the usual story about how essential it is for the City to build enough housing so that the LAPD can start arresting every homeless person in sight. She then moved on to what she characterized as “a rise, a more blatant rise in public safety issues with transients or mentally ill assaulting our residents on the street.” And while Joella Hopkins’s remarks are usually weird, her remarks here were even weirder than usual.

Of course, this “rise in public safety issues” is a favorite narrative of our City’s zillionaire elite when it comes to repressing the homeless of Los Angeles. Usually they don’t bother with evidence, but Joella Hopkins, to her credit, her shame, something, did at least try to support the claim, seemingly justifying it with this cryptic remark: “… if you guys are on social media …”

That’s clearly2 a reference to the infernal Facebook group DTLA Town Square, where unsavory gangs of reeking Josh-Albrektson-wannabe zombies, including both Joella Hopkins and her damn boss, lurch to and fro moaning about unprovoked homeless people attacking them and their damn fluffy doggies. Why look, here she herself is asking them what they think about putative public safety, right on the group there, just last night.3 You can tell things are getting serious because the replies all link to a super-believable stranger-danger story in the freaking Daily Mail.4

The tone of which story is, not coincidentally, right in line with Joella Hopkins’s envisioning of the streets of Downtown Los Angeles as some kind of post-apocalyptic free-for-all in which the housed residents, whom she calls simply “residents,” are the victims of ongoing unprovoked physical attacks by the homeless residents, whom she calls simply “homeless,” using all kinds of exotic techniques of physical violence.

Which, I guess, is why she told the South Park Board that “… we shouldn’t have to fear or be constantly looking over our shoulder in Downtown for someone coming down the streets, arm bar you.” This statement was met by all with well-deserved WTFlitude. Evidently the board is as ignorant as I am about the putative attack techniques of unprovoked homeless residents, so that Joella Hopkins was forced to explain herself, which she did quite clearly: “Any wrestling fans here??!! [general moronic hilarity] Well, Dad and I watched WWE all my life growing up, so ha ha!!”

Be sure to watch her actual real-time demonstration of how unprovoked homeless people carry out an arm-bar attack! And of course, the subsequent attack of nervous, guilty, clueless giggling on the part of the board as they all enjoy sharing in Joella Hopkins’s weirdo envisioning of homeless human beings as costumed wrestling villains. It’s worse than the damn Grey Poupon episode at the Fashion District BID.

There’s ultimately no point to this post I guess. It’s yet another evocation of my lost innocence. As I’ve mentioned many times before, when I started this blog in 2014, and even for maybe a year after that, I had some kind of faith, no matter how weirdly incompetent, privileged, whiny, and ridiculous the BIDdies might be, that at least City staff must be at least professional, at least a little bit invested in governing well. Now not only do I not believe any such thing, I can’t even remember why I believed it then.

Hi good morning everybody my name is Joella. I am the Downtown Area director for councilmember Jose Huizar. And he had another event this morning so he’s coming a little late. But I am happy to get started and really answer any immediate questions, or if you just want me to give a brief overview, what would you prefer? So obviously homelessness is a top priority for us. And addressing the numerous pieces of the puzzle to that concern and as Ellen was mentioning, the mental health issue, we’re watching and seeing what’s happening with the jail and the county space and what they’re proposing there, that piece of the puzzle. Looking to do additional shelters, storage, because in order to truly enforce 56.11 the law states that we need to be able to provide those options for our homeless before we can actually enforce some of those ordinances, so we’re really actively engaged in that process. And that’s everything from lot five over at El Pueblo, to I think we’ll be announcing soon another venue here in Downtown which we’re very excited about to start that process down in the Skid Row area, and working obviously with LAPD to look at a growing trend in our area is, and if you guys are on social media, a rise, a more blatant rise in public safety issues with transients or mentally ill assaulting our residents on the street. So we actually just scheduled a meeting with Captain Reina in the council office and the councilmember will be meeting with him Monday after fourth of July cause everyone’s hands are full right now with that. And they’re going to be really reviewing what are our City initiatives, what can we do to build a better capacity, cause our residents are growing, we do have more patrons coming in from outside of Downtown to our businesses and restaurants, so how do we address those issues? What can we do, is it time for us to call for additional officers on the street? Where are we at, and let’s analyze, especially as we grow and look towards the future. So that meeting is scheduled for the 9th. So we’re very excited about getting that up and running and having those discussions, because it’s just not OK with what, we shouldn’t have to fear or be constantly looking over our shoulder in Downtown for someone coming down the streets, arm bar you. We know that’s completely unacceptable. [general questioning; Joella Hopkins acts out an arm bar] Are you wrestling? Any wrestling fans here??!! [general moronic hilarity] Well, Dad and I watched WWE all my life growing up, so ha ha!!

Image of Joella Hopkins is ©2018 MichaelKohlhaas.Org and is based off/on this little floofball right here.