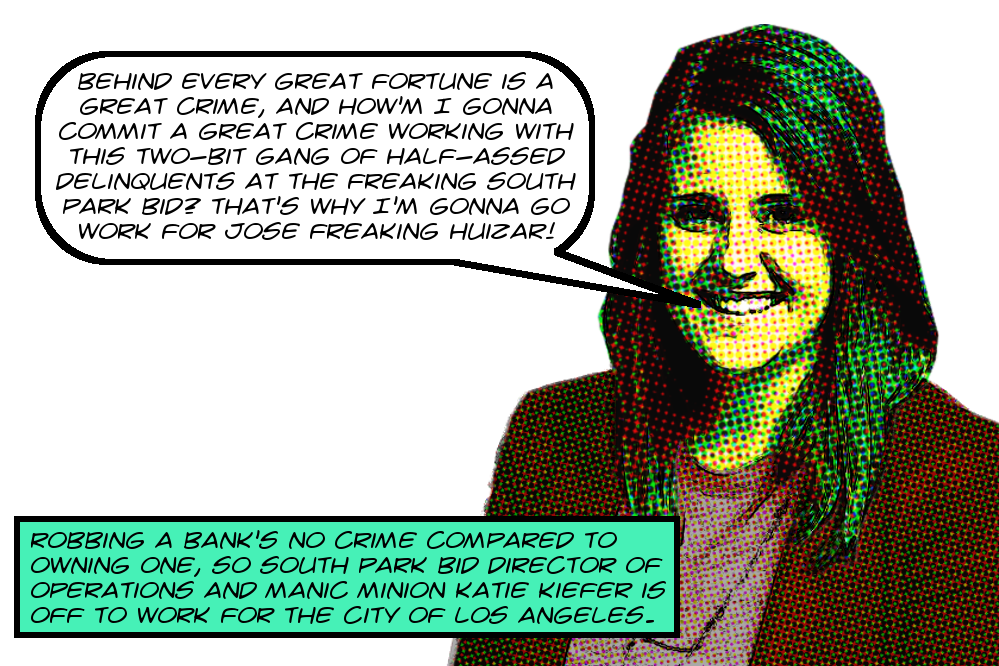 This is just a short note to announce the availability of video of this morning’s meeting of the South Park BID‘s board of directors. There’s a lot going on here, and I have at least a few detailed posts to write about this material over the next few days, but I just wanted to provide links so you can see for yourself, and also to announce a stunning piece of news about the SPBID’s director of operations Katie Kiefer.

She is leaving the BID to go work for the prince of darkness himself, Mr. José Huizar, over at 200 N. Spring Street. This makes her the latest BIDdie to move over to Huizar’s office, the last known instance being Mr. Ari Simon, late of the Historic Core BID, batty little fusspot Blair Besten’s weirdo empire on Broadway.

Here are links to the video, and turn the page for a transcription of bad BIDdie Ellen Riotto’s announcement to the board:

ER: I do have one other important staff update, that it’s with a heavy heart that I make this announcement. Our very own Katie Kiefer, director of operations, will be leaving us at the end of next week. Katie, I can announce [unintelligible], right?

ER: We are excited that we’ll still be able to work with Katie. She will be moving over to Council Office 14 and she will still be in and around Downtown fixing problems and making everyone’s lives better. So I actually just want to thank Katie.

Image of Katie Kiefer is ©2018 MichaelKohlhaas.Org. It was pieced together from this Katie right here.