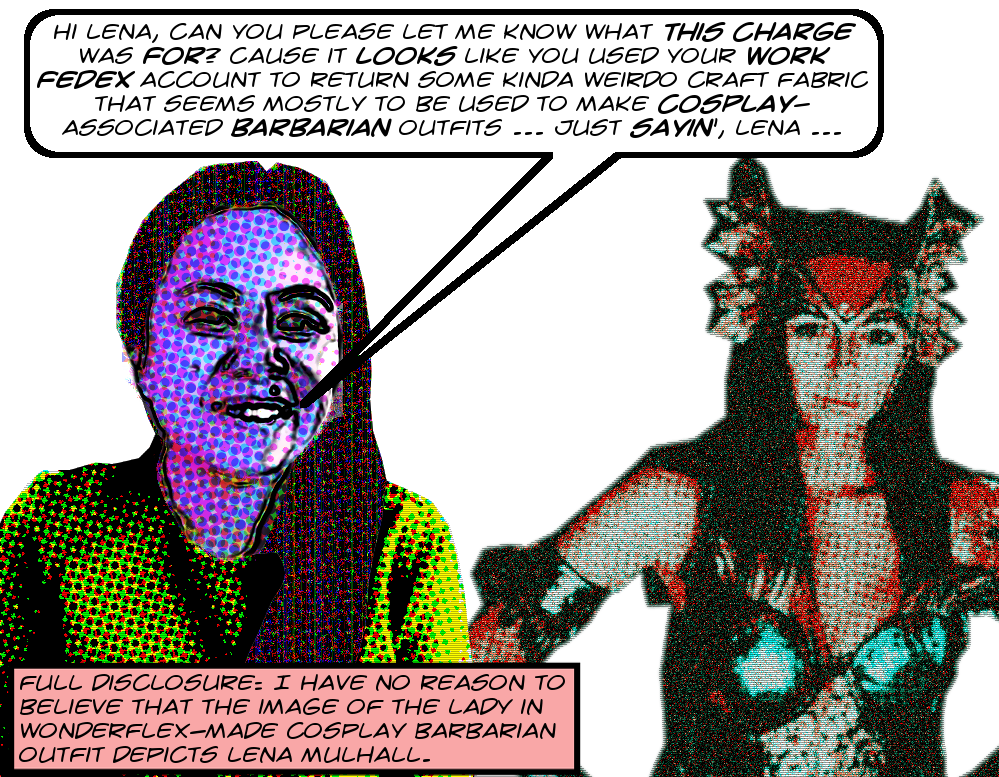 So the other day I got a metric doodieton of emails from the Downtown Center BID, published them all right here on Archive.Org, and have been gradually writing about item after item. Today’s item is, from one perspective, inconsequential albeit entertaining. From another point of view, though, it illustrates the utter flamingly shameless flagrancy of the Downtown zillionaire establishment’s hypocrisy when it comes to law and order.

These parasites1 expect everyone, especially the homeless population of our City, to follow the law to the very freaking letter while they themselves, it turns out, are somehow allowed to steal from their employer and only make retribution months later when their crimes are discovered and that, it seems, settles the issue. Homeless people are caught with stolen bicycles all the time. Just imagine if all they had to do at that point was tell the cop that they would return the bike to the owner and that act of contrition, even if it was only contrition after apprehension, would make everything be just fine!

Why aren’t Carol Schatz and Jessica Lall advocating for this kind of policy, since it’s evident that it’s what they use internally at the CCALA and the DCBID? Oh, right, I haven’t told you the story! Well, TL;DR is that it seems that on March 30, 2017 at 2:00 p.m. precisely, DCBID staff accountant Joan Noble emailed CCALA office manager Lena Mulhall and was all like “WTF?! What did you spend this $31.39 on??!” and Lena Mulhall was all like “Sorry! I’ll pay it back! Just tell me who to write the damn check to!!”

Naturally turn the page for transcriptions, more emails, and the full and complete story of how Lena Mulhall charged $31.39 worth of FedEx to her employer’s account to return some cosplay supplies to a retailer and didn’t reimburse the funds until more than three months later and then not until she actually got caught!

So as I said, the story begins on March 30, 2017 with this email from Joan Noble to Lena Mulhall, which said:

Can you please let me know what this was for (see attached)?

And the attachment was this scan of an invoice from FedEx dated December 30, 2016 with a ship date of December 15, 2016. The amount was $31.38, charged to ship 13.4 pounds to some outfit known as Wonderflex. In case you’re wondering, it turns out that Wonderflex is a material beloved of cosplayers the world over for making those costumes that they love so well. Not, I’m guessing, the kind of thing that Carol Schatz keeps on hand for DCBID or CCALA related activities and thus unlikely to be work-related.2

So then, less than two hours later but ten weeks after she shipped the Wonderflex, Lena Mulhall performatively confessed all in this email:

This is my personal.  I can pay FedEx directly or give a check on Monday?

So ten weeks after she stole the money she gets called out about it and remembers it so clearly that she doesn’t ask questions, she just offers to repay the money. Everyone who’s thought about it knows that this kind of contrition, inspired by the fact of getting caught, is far less perfect than sincere repentence. More important, though, is the fact that this kind of contrition isn’t available to the homeless people that both the DCBID and the CCALA target with their relentless pressure on the police to arrest as many as possible as often as possible.

It’s a serious question; whatever they’re arresting all these homeless people for, bike theft, drinking in public, public urination, sitting on the sidewalk, drug possession, why can’t it all be fixed by just making retribution if and when the transgressors get caught? No need to arrest, just a hearty apology and an offer to pay back damages could suffice if the BID had a consistent moral code.

But of course, morality doesn’t suit their wicked purposes, and neither does moral consistency. On the other hand it’s good to know that it’s not just that they’re all acting like barbarians, but maybe some of them are even dressing up like barbarians. Not in the office, though!