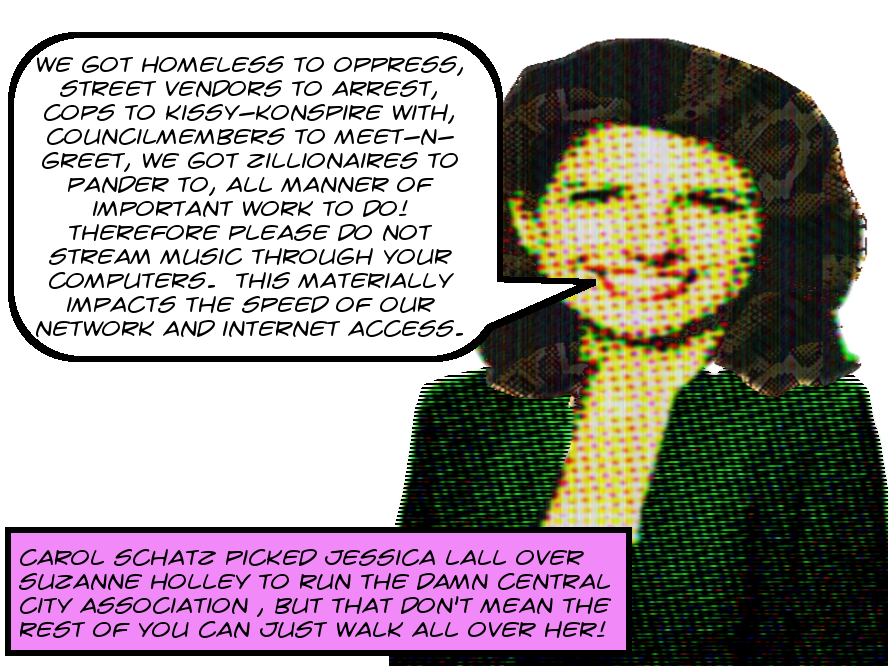 This is just a short note to announce that I recently received a ton of records from Suzanne Holley of the Downtown Center BID. These are ostensibly all non-exempt emails between the Central City Association of Los Angeles and DCBID staffers from July 1, 2016 through January 31, 2018. You can get most of them here on Archive.Org. That set includes a bunch of PDFs I exported as well as an MBOX file that will give you access to the attachments.1

Suzanne also saw fit to redact 134 of these emails. She supplies them as MSG files, which I guess are binaries of some sort and not easily edited, so she prints them to PDF and redacts with some kind of PDF editor.2 You can find these 134 additional emails here on Archive.Org. There are a bunch of really important items here that I’ll be writing about over the next week3 but I just want to leave you with one hilarious item about music streaming. Turn the page for a transcription.

Please do not stream music through your computers. This materially impacts the speed of our network and internet access.

Perhaps even more interesting than that is who she sent this email to:

That’s pretty much the whole gang of co-conspirators, both indicted and unindicted. I mean, just think about it. On July 6, 2016 we have Suzanne Holley telling her boss, the Queen of Downtown herself, Ms. Carol Schatz, that she can’t listen to Frank Sinatra on Spotify at work.5 A mere three months later Carol Schatz handed over the keys to the CCALA empire to pernicious upstart scarecrow Jessica Lall rather than to her protégé Suzanne Holley.6 Coincidence? I hardly think so. Moral? Don’t tell your damn boss what to do with her computer at work. Got it, Suzanne? This WILL be on the final.

Image of Suzanne Holley is ©2018 MichaelKohlhaas.Org.