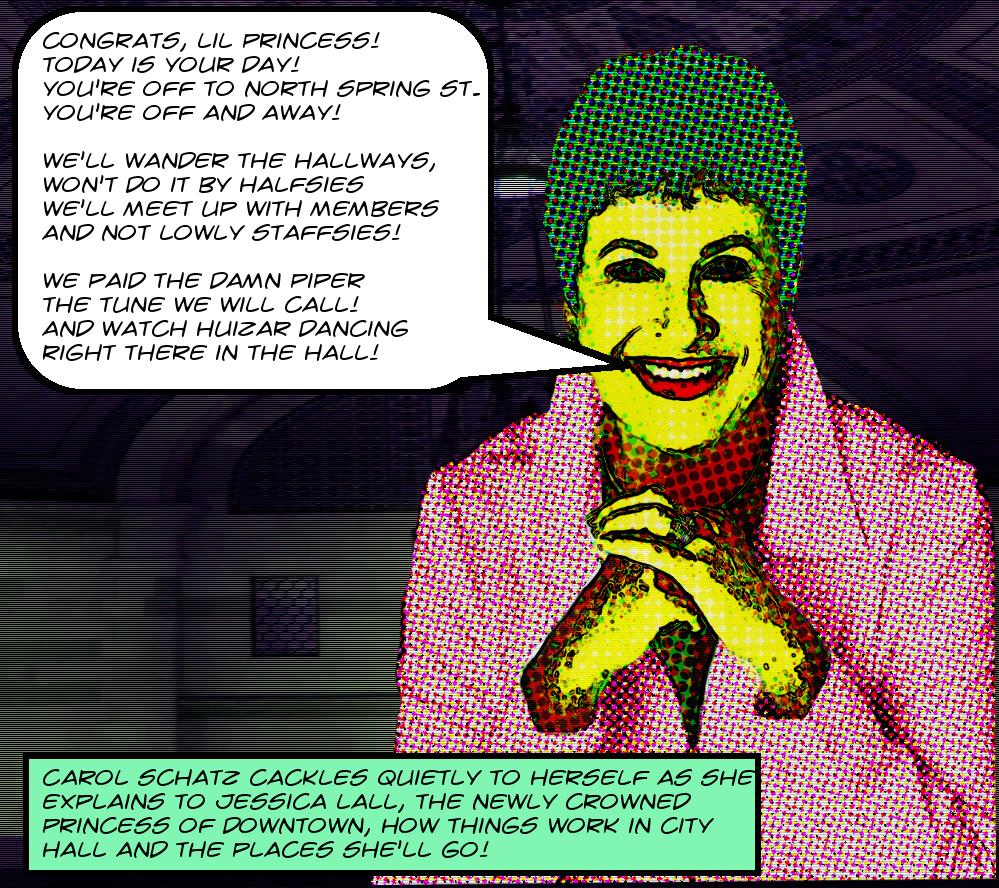 Yesterday I loosed mere anarchy on the world in the form of about 3500 emails between the Downtown Center BID and the seething stew of evil goop known to the world as the Central City Association. The release came in two parts, the unredacted and also the redacted.

Now, I know that not everyone in the world is obsessed with these BIDdies as I am, so let me just remind you all that in September 2016, Queen of Downtown and Zillion Dollar Woman Carol Schatz retired from her lofty post as supreme commanderette of the CCALA. She subsequently anointed the former big bad bossietta of the South Park BID, Jessica Lall, as Princess of Downtown and Schatz’s successorette at CCALA, effective January 3, 2017.

With this background in mind it turns out that this little gem from February 6, 2017, is not, by far, the least interesting item in the new release. In short, what happened is that on January 13, 2017, just ten days after she assumed the throne, Jessica Lall made an appointment to go to City Hall on February 9, 2017 with Carol Schatz, presumably to get shown the ropes and be introduced personally to the tame Councilpets by the master Counciltamer herself.

Of course, February 9, 2017 was a Thursday, which revealed Jessica Lall to be the inexperienced ignoramus that everyone Downtown mostly knew that she was.1 Carol Schatz, though, as much as this faux pas might have made her wish she’d elevated anybody but Ms. Jessica Lall to the crown, gritted her teeth and decided to teach her error-prone little protégé a lesson. Fortunately for us and for history, she did this via an email.

Now, if you are, as I am, a normal human being, those last sentences may well be completely unintelligible to you. Turn the page for transcriptions of everything along with the details of why you should never go to City Hall on a Thursday and how Carol Schatz schooled the newly-minted Princess in the inscrutable folkways of those who are paid to influence!

The whole story begins with this little item right here. It looks like there’s no content, but I believe that what’s going on is that Jessica Lall attached an ICS file to the email and then, because no one handed over a copy of the actual email, we only see the blank body:

On February 6, a Monday, just four days before the big meeting was to take place, Elisabeth Cutler, who is Carol Schatz’s wholly-owned flunky at the DCBID, emailed Shawn Bratton, who plays the same role at the CCALA for Jessica Lall, trying to confirm the big meeting:

Carol wants to confirm if this meeting is still on for Thursday at 10:00am. Please let me know, thank you.

One minute later Shawn Bratton confirmed that indeed, the meeting was still on. Immediately thereafter Schatzian minionette Elisabeth Cutler fired off a manic missive to her bosslady confirming the confirmation:

FYI, Shawn confirmed that Thursdays meeting with Jessica at 10:00am (City Hall) is still on.

And then, hours later, Carol Schatz, having had time to consider how to use all her well-learned politesse to break the news of her own insufferable ignorance to pernicious parvenu Jessica Lall, politely explained to the Princess of Downtown that well-informed lobbyists, influencers, if you will, do NOT go to City Hall on Thursdays:

Jessica, I thought we were going to go together on a day when the City Council meets. If we roam the halls on a Thursday we will probably meet with some staff members but not the members. Is that what you were hoping to do? Give me a call at home tonight or tomorrow morning. I’ll be leaving the house about 12:30 tomorrow and then will be available on my cell. Wish us good luck with ■■■■■■■■■■ Best, Carol2

See how gently the Queen breaks it to the Princess? What a good rabbi is Ms. Schatz! Note, however, that La Schatz does let it slip that this whole trip East3 was Jessica Lall’s idea. That’s also part of the most excellent Schatzian pedagogy, which, like that of her fellow Italian, is heavily reliant on giving the student some lead to make her own errors. Bravo, Ms. Schatz! And, to end up this little parable, let’s see how the Princess herself responded:4
From: Jessica Lall <JLall@ccala.org>
Sent: Monday, February 06, 2017 9:21 PM
To: Carol Schatz <cschatz@downtownla.com>
Subject: Re:  Re: Carol/Jessica meeting at City Hall

You are correct – this was an oversight.

Copying Shawn and I’ll speak with her tomorrow about getting it rescheduled.

And see what a good choice for proto-Queen Ms. Schatz made in choosing Ms. Lall! Ms. Lall has the good sense not to admit that she didn’t have the first freaking idea what she was doing when she made this appointment, but also she doesn’t argue with Regina Emerita either, which is never ever ever a good idea.

And, friends, that’s the story of why you and I are never gonna be successful lobbyists. Not only do we not make megabuxical donations to the campaigns of the Councillors so why would they listen to us anyway, but we probably would just blithely go to City Hall on a Thursday, thereby inadvertently reducing what’s left of our pathetic amount of influence by 20% right off the top! Sigh, amirite?

Image of Carol Schatz is ©2018 MichaelKohlhaas.Org. It’s made up from this picture of Carol Schatz and a picture of the City Hall rotunda that I took myself one lonely Thursday while I was ignorantly wandering the halls hoping to spread some influence around.