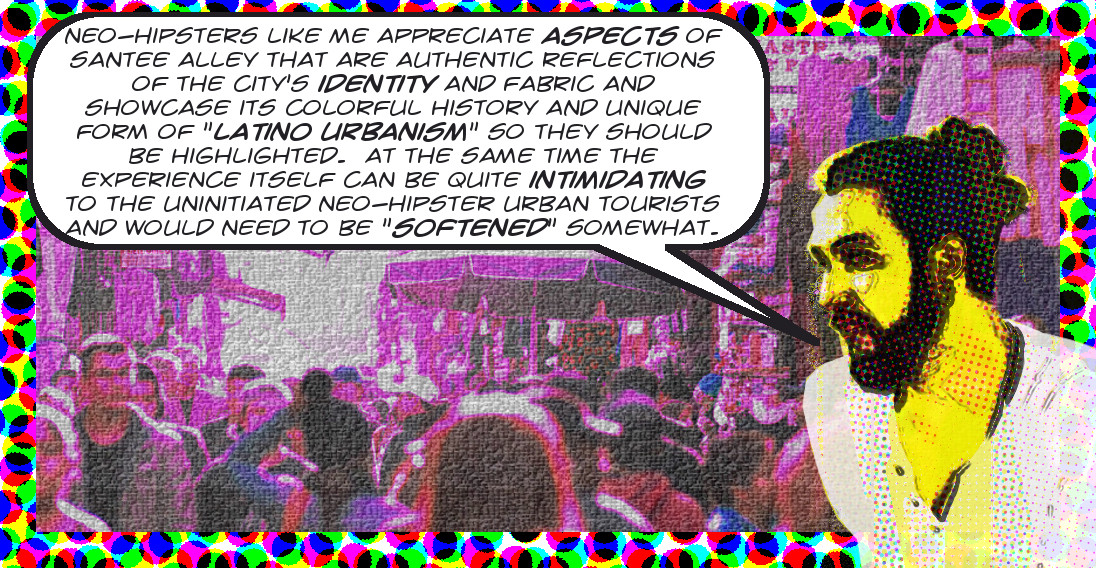 It seems that last year the Fashion District BID hired some outfit from Berkeley known as MJB Consulting to study the so-called “repositioning” of Santee Alley. Here’s a copy of MJB’s proposal offering to do the work for $19,000. And here is a copy of the report they produced. And what a piece of work it is, friends.

Unfortunately the sheer weirdness of this document is probably beyond my power to describe, so I’m going to end up quoting a lot of it. But the stuff in the headline is all in the report, and so much more besides. It’s 25 pages of deep crazy, centered around the socioeconomic interplay between blue-collar Latinos and an imaginary social group called “neo-hipsters.” The methodology is based on “psychographics,” which was made up by Mr. MJB himself, Mike Berne. It is, according to Mike Berne:

In contrast to demographics, which characterizes customers largely in quantitative terms (e.g. household income, home value, etc.), psychographics considers them qualitatively as well, based on their lifestyles, their sensibilities and their aspirations. A classic example is the perceived difference between those who shop at Wal-Mart and those who prefer Target (or “Tar-zhay”).

That’s social science, friends, and you can’t argue with science! And neo-hipsters? Glad you asked!

“Neo-hipster” is a term coined by MJB Consulting, referring to a specific psychographic segment. … The major data-mining outfits, like Claritas and ESRI, have developed frameworks for delineating different psychographic segments – PRIZM and Tapestry, respectively — but MJB Consulting, feeling that those schemes do not adequately reflect the nuances of urban consumers, has devised its own for such markets, in which the “neo-hipster” figures prominently.

And, with this vocabulary firmly in hand, including the prominent figuration of the “neo-hipster,” the report commences a freaking deep dive off the freaking deep end. In short, even though it’s counterintuitive, Santee Alley should continue trying to serve blue collar Latinos. Blue collar Latinos will only be confused by fancy food like grilled cheese and lobster rolls because they have high unemployment and large families and they like bacon dogs.

In some sense, I guess, it’s superficially1 heartening not to see the kind of casual anti-Latino sentiment that pervades the Hollywood BIDs, to the point of their hatred of Latino-influenced art genres and surreal anti-Peruvianism. These people want to keep their Latino customers, I guess.

On the other hand, the sheer number and variety of the stereotypes at work here are deeply disconcerting. Ultimately, it’s yet another manifestation of the cluelessness of the white supremacists who run the BIDs of Los Angeles. As you’ll see below, they only want to keep the Latinos because they can’t figure out how to get the neo-hipsters to move in.

Here are some more examples: blue collar Latinos will be happy if Santee Alley installs dance floors, soccer promotions, flat-screen TVs running sports, and so on. The ultimate goal seems to be to attract “neo-hipsters” to Santee Alley by promoting the blue collar Latinos as an authentic part of a “cultural tourism” experience, although they’re evidently a little scary so will need to be “softened.” Santee Alley as zoo, Latino customers as exhibits, neo-hipsters as patrons. Think I’m kidding? Turn the page for actual quotes.

The submarket which Santee Alley property owners should continue to foster is the one already there: blue-collar Latino families. Often arriving at Santee Alley together, these large households typically contain several children, and their overall buying habits reflect as much, manifesting demand for kids’ clothing and furniture as well as fast food and family restaurants.

Due to their high unemployment, modest incomes and large families, they tend to be laser-focused on bargains, though there is also a consciousness of and preference for the latest trends and fashions, in apparel, personal care, etc.

Some Santee Alley property owners have suggested that energies and resources be focused on trying to attract other submarkets, like the aforementioned neo-hipsters. However, such efforts can backfire.

Bargain pricing is a critical piece of Santee Alley’s identity, as are the bacon-wrapped hot dogs. Within this context, the addition, say, of even just a few gourmet food trucks selling $10 grilled cheese sandwiches and $20 lobster rolls incurs the real risk of confusing and alienating the submarket that accounts for much of the foot traffic there today.

It is worth noting as well that a growing number of “cultural tourists” are drawn to attractions like Santee Alley precisely because they are — or promise to be — authentic reflection(s) of the city’s fabric and identity, and thus offer opportunities for immersing oneself therein.

Indeed, cultural tourism is increasingly popular among the sorts of neo-hipsters who have been or will be populating renovated and newly-built residential complexes across and in the neighborhoods surrounding Downtown Los Angeles, including projects that already exist in the Fashion District or have been recently proposed.

In light of this trend, aspects of Santee Alley that showcase its colorful history and its unique form of “Latino Urbanism” should be highlighted. At the same time, the experience itself can be quite intimidating to the uninitiated and would need to be “softened” somewhat.

The Fashion District could well become the next frontier for “neo-hipsters”, though their antecedents, the “hipsters”, are more likely in the near term.

Such “neo-hipsterfication” is not inevitable, however. It could be undermined by hype-driven speculation and/or growing anti-gentrification sentiment.