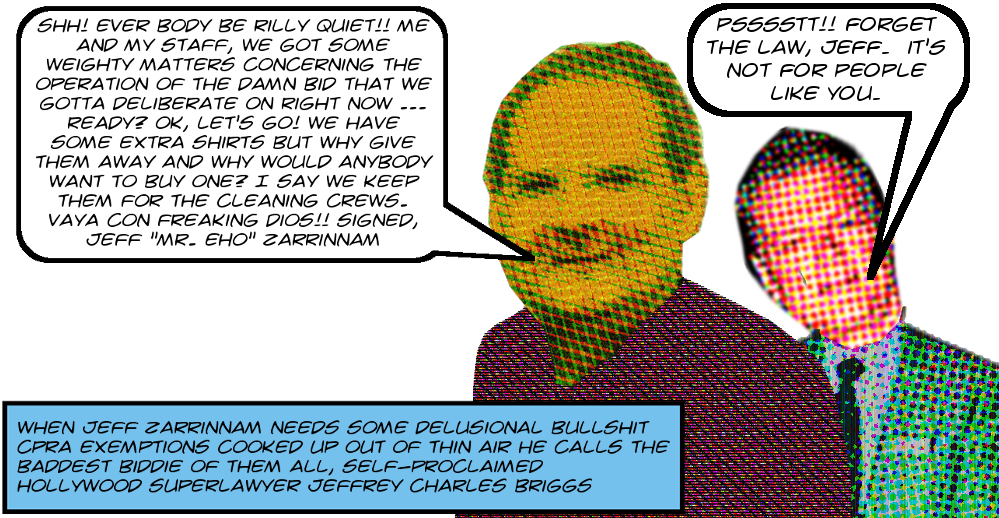 Recently, first on February 8, 2018 and then again on February 17, 2018, I’ve published some sets of emails for which self-proclaimed Hollywood Superlawyer Jeffrey Charles Briggs had at some point in the past claimed were exempt from production via the California Public Records Act due to the half-delusional common law principle known to the zillionaire elite and their minions as the Deliberative Process Exemption.

Both of those sets of documents were collateral fallout from an almost-concluded writ petition I was forced by Briggs’s bizarro intransigence to file against his client, the Hollywood Media District. Today, though, I have yet another set, this batch from the East Hollywood BID. They are also a client of Briggs, moved not only to bizarro intransigence but to a freaking intransigential paradigm shift by Briggs’s newly emboldened stance against simple compliance with the law.1

There are two quite distinct parts to this story. First, there are the actual emails that Briggs Esq. claimed to be exempt. Along with those goes much more than a modicum of mockery. Second, there’s the story of the CPRA request itself and how Attorney Briggs cannot for the freaking life of him just tell his client to follow the damn law because it’s easier for everyone in the long run. Turn the page for an obsessively detailed discussion of the first part.2

As I said, we’re going to talk about four email chains that Jeffrey Charles Briggs once upon a time claimed were exempt due to their deliberative content. Before that, though, you might want to review the Deliberative Process Exemption. I know it’s hard for me to hold all of it in my head at one time. Imagine how hard it must be for Counselor Briggs! Anyway, according to a super-famous case on the matter, that is Times Mirror Co. v. Superior Court, this so-called exemption has three purposes:

First, it protects creative debate and candid consideration of alternatives within an agency, and, thereby, improves the quality of agency policy decisions. Second, it protects the public from the confusion that would result from premature exposure to discussions occurring before the policies affecting it had actually been settled upon. And third, it protects the integrity of the decision-making process itself by confirming that ‘officials should be judged by what they decided[,] not for matters they considered before making up their minds.’

And in order for it to apply to a particular record, in order to exempt it from production in response to a CPRA request, the court found that, first, the document must be pre-decisional in that the government agency must be able to point to “particular policies or decisions that resulted from particular” discussions in the record. Second, it must be deliberative in that it “must consist of opinions or recommendations.” With that in mind, here are the four email chains that Mr. Superlawyer himself claimed were exempt from production as part of a deliberative process:

Let’s take a look at the first one!

Sent from my iPhone 6

That is the president of the Board of Directors of the East Hollywood BID, Mr. Jeff Freaking Zarrinnam himself, telling his Executive Director, Nicole Freaking Shahenian, to put a freaking item on the freaking agenda. Not. Part. Of. A. Deliberative. Process. For shame, attorney Briggs!

Now take a look at the second. This one’s more plausible in some twisted only-in-the-head-of-Jeffrey-Charles-Briggs kind of way, but more plausible does not mean plausible, as it turns out. First Nicole Shahenian writes to the überBIDmeister Jeffrey Zarrinnam:

Hi Sharyn! As part of the EHBID’s sponsorship of the Econ Dev Summit on the 22nd , the BID will have a 3 ft. exhibit space from 8:00 am – 9:00 am. Would one or two of your team be interested in staffing the table for that hour and talking about your work with the BID? You would be welcome to put out any LABT information/collateral to promote your organization as well.

Jeff- do we have any extra EHBID t-shirts or other items that we would want to give away or have available for purchase?

Subsequently, the mad mogul himself, Jeffrey Zarrinnam C.H.A.,3 fired off this masterful4 response:

We have some extra shirts but why give them away and why would anybody want to buy one?

I say we keep them for the cleaning crews

Well, friends, I can hear you saying, yeah, but maybe this is deliberative! After all, they were discussing what to do with some shirts, and Nicole said yeah, let’s give them away or sell them and Jeff said the hell with that, keep them for the cleaning crew. But really, this is not a weighing of options concerning policy. It’s Jeff Zarrinnam unilaterally deciding what to do with some shirts. Not covered, clearly.

From: Amir42@amail.com \ mailto:amir42@gmail.com
Sent: Wednesday, June 29, 2016 11:48 AM
To: Nicole Shahenian <nicole@ehbid.org>
Subject: Nicole, I am an investor, looking to buy commercial property on the Vermont

Hope all is well.

I was reading all about what you are doing in East Hollywood, and am very excited if I can be a part of it, by investing in commercial properties in the areas.

I was hoping to find some projects in the working, other than the parking structure of the presbyterian hospital.

Are you aware of any other projects on that corridor, or on Fountain, that maybe in the entitlement / permit phase with the city, that will impact the area positively?

And Nicole Shahenian sends it along to Jeff Zarrinnam for response:

Subject: FW: Nicole, I am an investor, looking to buy commercial property on the Vermont corridor, near Sunset Bl.

Do you have any ideas for him?

Subject: RE: Nicole, I am an investor, looking to buy commercial property on the Vermont corridor, near Sunset Bl.
From: “Jeff Zarrinnam” <Jeff@Hollywoodhotel.net>
Date: 06/27/2017 09:26 PM
To: “Nicole Shahenian, EHBID”

He’s being very narrow in what he wants.

Vermont near Sunset which is all the hospitals

Same for fountain which is mostly owned by Scientology and Hollywood Pres.

And again, what’s the policy that they’re having candid discussions about? Nothing. No policy, no deliberative process. Obviously they wanted to keep this email secret so good old Amir Halavi wouldn’t have to read what they said about him behind his back. The solution to that, I’d think, would be not to say underhanded stuff behind people’s backs in emails that you can guess pretty well are going to be made public at some point rather than lying, but what do I know?

Also, you’d think Jeffrey Charles Briggs would get tired of being such a freaking liar, and probably he will given that it doesn’t serve him well in court. But seriously, grownups shouldn’t need judges to tell them to be honest, even if they are lawyers.

In any case, the best part of this material isn’t the content so much as the opportunity to look behind what are often opaque claims that some records are exempt from disclosure. One’s instincts, naturally, are screaming out to the high heavens that it must be bullshit, but that’s not always enough to file a petition on.5 Hence it’s intrinsically interesting in cases like this to get to see behind the veil and be able to be explicitly sure that, yes, those exemption claims were in actual fact pure and unadulterated bullshit.

In any case, there aren’t a whole lot of things in my life that make me want to thank old Jeffrey Charles other than sarcastically, but I suppose this might be one of them. So thanks, JCB!6

Image of the Jeffs is ©2018 MichaelKohlhaas.Org and was mashed up outta Jeff One and Jeff Two.