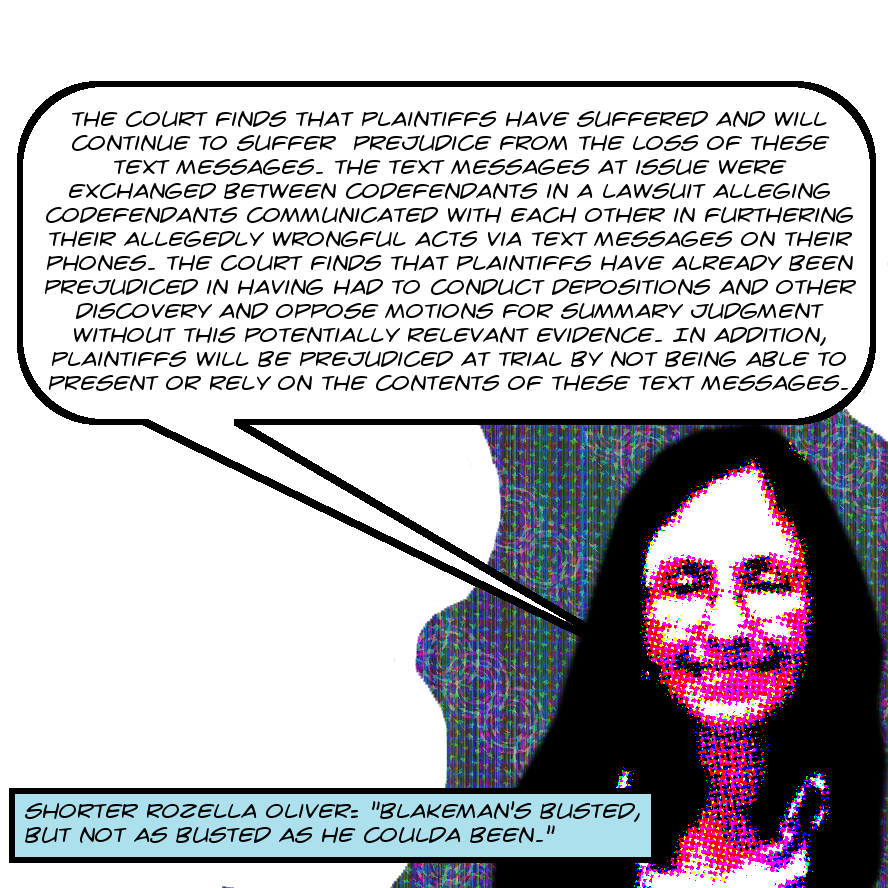 At this point the Lunada Bay Boys discovery-related complaints, cross-complaints, bitching, cross-bitching, moaning, cross-moaning, and so on and on and on have gotten so tortuously complexicated that there’s essentially no way to summarize them any longer. However, I will remind you all that there was a hearing on December 6 before Magistrate Judge Rozella Oliver on spoliation of evidence by the City Defendants1 and most rapiest Bay Boy defendant Sr. Brant Blakeman.

At issue were some text messages that Blakeman failed to preserve. The texts were on a phone issued to him by the City of PVE, which is why they were involved. The plaintiffs asked Oliver to find that Blakeman and the City not only had a duty to preserve the texts but that they had been so adversely affected by their destruction that the court ought to make Blakeman and the City pay fines, pay fees, pay costs, their motions for summary judgment ought to be denied out of hand, and an instruction to the jury stating that they should draw an adverse implication from the destruction of the texts. Blakeman and the City argued that they didn’t do anything wrong at all because they had no duty to preserve anything. Just yesterday Magistrate Judge Oliver issued her report and recommendations on the issues raised during the hearing.

With respect to the City, Oliver found that while they did have a legal obligation to preserve evidence starting earlier than they claimed, no evidence was lost specifically due to the City’s inaction, so she declined to recommend any sanctions against the City. Blakeman, on the other hand, did a few bad things, according to the Magistrate Judge.

Basically, she’s recommending that Blakeman have to pay the plaintiffs’ attorneys for their costs and fees in bringing the motion for sanctions against him, and that he submit to an additional deposition that he pay for on the subject of what happened to the text messages. Additionally she recommends that the plaintiffs be allowed to present evidence to the jury about his failure to preserve and that if Judge Otero thinks it’s justified at trial, he consider allowing an instruction to the jury on what kind of inferences they can draw from Blakeman’s actions. Finally, she declined to recommend that Blakeman’s motion for summary judgment be dismissed a priori. Turn the page for transcribed selections.

Transcription of selections from Rozella Oliver’s report and recommendations on Blakeman’s and the City defendants’ spoliation:

Defendant Blakeman contends that because the four text messages at issue all occurred prior to when his duty to preserve attached, the analysis ends there.3 Additionally, Defendant Blakeman argues that it is completely unreasonable to expect him to immediately retain a forensic expert to conduct a comprehensive and expensive extraction of his phone upon being served with a lawsuit, or to perform evidence preservation measures that were never requested by Plaintiffs. At the December 6 hearing, counsel for Defendant Blakeman stated that Defendant Blakeman kept the DDP Phone in working order and did nothing to attempt to dispose of the DDP Phone. Defendant Blakeman also cites to the Committee Notes’ advisement that courts should be sensitive to a party’s sophistication with regard to litigation in evaluating preservation efforts.

The Court is not persuaded by Defendant Blakeman’s argument that he had “no duty to preserve text messages sent prior to being served with this lawsuit.” Plaintiffs allege that Defendants communicated with each other to coordinate efforts to exclude outsiders, including on various dates prior to the filing of the lawsuit. Beginning on April 14, 2016, Defendant Blakeman had a duty to preserve any such communications that were stored on the DDP Phone, regardless of when they may have been created.

The Court thus finds that Plaintiffs have established the threshold requirement of Rule 37(e) that electronically stored information that should have been preserved in the anticipation or conduct of litigation has been lost because Defendant Blakeman failed to take reasonable steps to preserve it, and it cannot be restored or replaced through additional discovery.

Image of Rozella Oliver is ©2017 MichaelKohlhaas.Org and was based in puny-tive part on this little fellow right here.