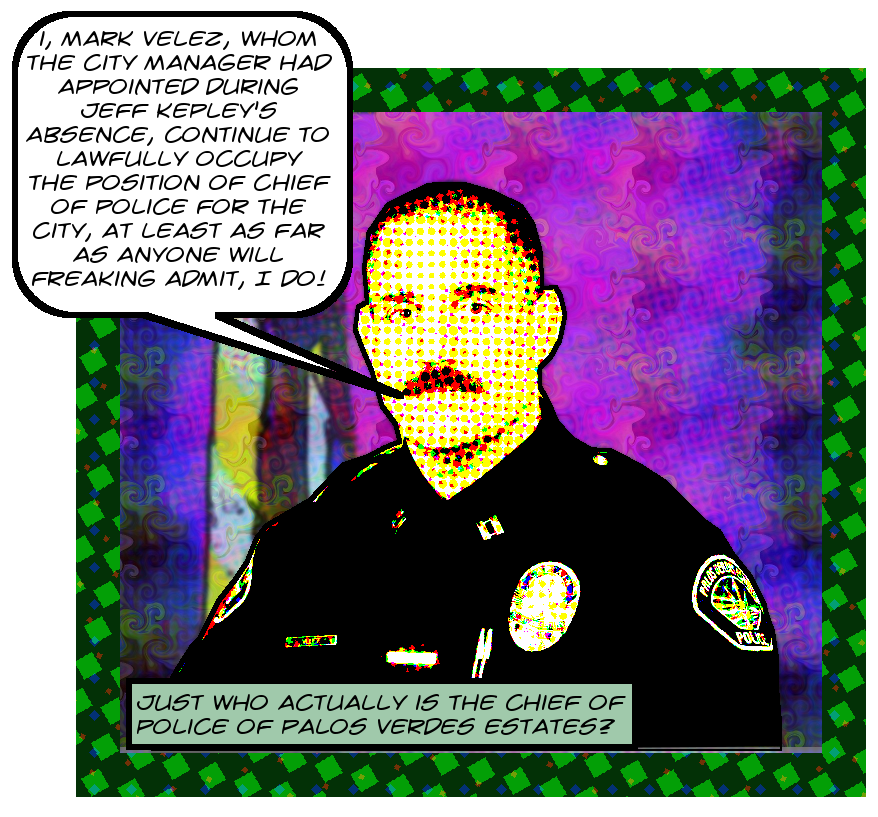 A very peculiar pleading in this most peculiar of cases hit PACER last night, in . It seems that PVE police chief Jeff Kepley retired at some point recently. Since he’s being sued in his official capacity rather than his personal capacity, it appears that Federal Rule of Civil Procedure 25(d) requires that Jeff Kepley be dropped from the suit and his successor named instead:

Public Officers; Death or Separation from Office. An action does not abate when a public officer who is a party in an official capacity dies, resigns, or otherwise ceases to hold office while the action is pending. The officer’s successor is automatically substituted as a party. Later proceedings should be in the substituted party’s name, but any misnomer not affecting the parties’ substantial rights must be disregarded. The court may order substitution at any time, but the absence of such an order does not affect the substitution.

So, very reasonably, it seems, plaintiffs’ attorney Kurt Franklin filed a Suggestion to the Court that the acting Chief, who seems to be Mark Velez at this point, be substituted in.1 This seems to be fairly inconsequential in that the rule seems to say that the substitution happens irrespective of whether anyone acknowledges it, but it also seems like the kind of thing one would want to tell the court about. If it comes up later and one knew about it and didn’t tell the court, how weird is that going to look?

Not that the City of PVE is worried about such niceties. As with everything to do with the City’s involvement in this case, the events leading up to this filing have an air of shady incompetence, evasion, and deception. It hasn’t yet been proven that this weirdo little City on a Hill has anything to hide, but they surely do act as if they do. So what’s one more little item like not telling the court that the freaking chief of police retired?

As always there’s a transcription after the break, as well as a timeline of key events.

Attorneys for Plaintiffs in the above-entitled action suggest to the Court a substitution of names for officials serving in in the position of Chief of Police for the City of Palos Verdes Estates, as the persons in the position have changed and are only named in their representative capacities:

2. During the City’s Rule 30(b)(6) deposition on July 12, 2017, the City identified Captain Tony Best as the person most knowledgeable on certain topics. Captain Best indicated that Chief Jeff Kepley had been on leave much of the year. Further, he stated that he had been appointed “Acting Chief of Police,” but that on July 1, 2017, the City Manager appointed Mark Velez “Acting Chief of Police.” (See, Best Depo., pp. 25-29, a true and correct copy of which is attached hereto as Exhibit 1.)

3. On information and belief pursuant to the attached City news release and representation by the City Manager of Palos Verdes Estates to the Daily Breeze, printed on August 28, 2017 (a true and correct copy of which is attached hereto as Exhibit 2), and the City’s current website as reflected on Friday, September 8, 2017 (a true and correct copy of the “Chiefs Welcome” is attached hereto as Exhibit 3), Jeff Kepley has ceased to hold the office of Chief of Police, due to his retirement.

4. On Friday September 8, 2017, I wrote Mr. Kepley’s attorneys in this matter (Ed Richards, and the other Kutak Rock attorneys) notifying them of Plaintiffs’ anticipated filing of a SUGGESTION UNDER FRCP 25(d) ON RECORD TO SUBSTITUTE OFFICIAL NAMED IN HIS REPRESENTATIVE CAPACITY DUE TO RESIGNATION. More specifically, I wrote “Early next week, we plan to file a request with the Court under FRCP 25(d) substituting Mark Velez as Acting Chief of Police for Jeff Kepley, whom we understand officially retired at the end of last month. We understand this from PMK Best’s deposition (on leave), a City press release (indicating formal retirement), the City’s website (Chief s message changed), and a Daily Breeze article dated August 28 (indicating formal retirement). Per this information, we understand the City Manager hopes to appoint a new full time chief within 4 months.” On that same day, Mr. Richards wrote back confirming that “you are correct that Kepley has now officially retired and Velez continues as the current acting Chief. I will confirm early next week whether we will continue to represent him [Kepley] for trial purposes. ”

5. On Thursday, September 14, 2017, not having heard from Mr. Richards or anyone else from Kutak Rock on the substitution, I wrote Mr. Richards again: “As follow up, I trust there is no objection by Chief Kepley to our filing the below captioned’SUGGESTION UNDER FRCP 25(d) ON RECORD TO SUBSTITUTE OFFICIAL NAMED IN HIS REPRESENTATIVE CAPACITY DUE TO RESIGNATION.’ Not having heard anything, we’ll file this tomorrow morning.” Mr. Richards wrote back quickly, asking Plaintiffs to delay notifying the Court about Defendant Jeff Kepley’s resignation so that he would have additional time to “consider and respond. Also, I am informed that the appointment of Velez to chief was temporary and he will be replaced at the end of the month. I can identify his replacement for you tomorrow. Is all of that acceptable?”

6. Also on Thursday, September 14, 2017, I wrote Mr. Richards back as follows: “Since you’ve confirmed Jeff Kepley is retired and no longer the Chief of Police for the City nor is he a City employee, we believe we have an ethical obligation at this point to notify the Court and substitute Chief Kepley out of the case as soon as possible. Still, we appreciate the notice that Captain Velez will only be holding the Chief of Police position through the end of the month. This is different than what was publicly messaged by the City Manager.” On September 15, 2017, Mr. Richards asked Plaintiffs to again delay notifying the Court about Jeff Kepley’s resignation: “[A]s I indicated and requested, I would appreciate the courtesy of delaying your filing until next Tuesday for the reasons set forth in my prior email. I appreciate your concern about what you perceive as an ethical obligation to make this substitution but I respectfully submit that this rush to file a substitution may be premature in view of the fact that one of the issues raised in the City’s pending Motion for Summary Judgment is a dismissal of the ‘Chief since his inclusion as a defendant is redundant and unnecessary. To try to substitute in the temporary Chief who did not hold that positon during the times relevant to the allegations in the Complaint seems to me to be both redundant for the reasons set forth in our Motion for Summary Judgment and inappropriate.”

7. Pursuant to the attached Exhibits and communication with Ed Richards the attorney of record for Jeff Kepley and the City in this matter, Jeff Kepley is no longer a City employee because he retired, and Mark Velez, whom the City Manager had appointed during Jeff Kepley’s absence, continues to lawfully occupy the position of Chief of Police for the City, serving as acting Chief of Police since July 1, 2017, which full-time permanent position was formally held by his predecessor defendant of record in this action (Jeff Kepley) until he retired. On information and belief, Mark Velez is to serve in the capacity of acting Chief of Police until the City Manager names a permanent Chief of Police, which the City has initially estimated to take place in three or four months.

8. In accordance with Fed. R. Civ. P. 25(d)(1), Plaintiffs suggest that given Defendant Jeff Kepley was named in his representative capacity and that he no longer works for the City of Palos Verdes Estates, that the Court issue an order (1) substituting Mark Velez as a defendant in place of Jeff Kepley, who is the current defendant of record, and (2) that the City notify the Court as soon as either a new acting, interim, or permanent Chief of Police is named and assumes the position of Chief of Police for the City.

The image of Mark Velez at the top of this post started out as this and ended up as you see it today, proudly bearing the mark of the beast: ©2017 MichaelKohlhaas.Org.