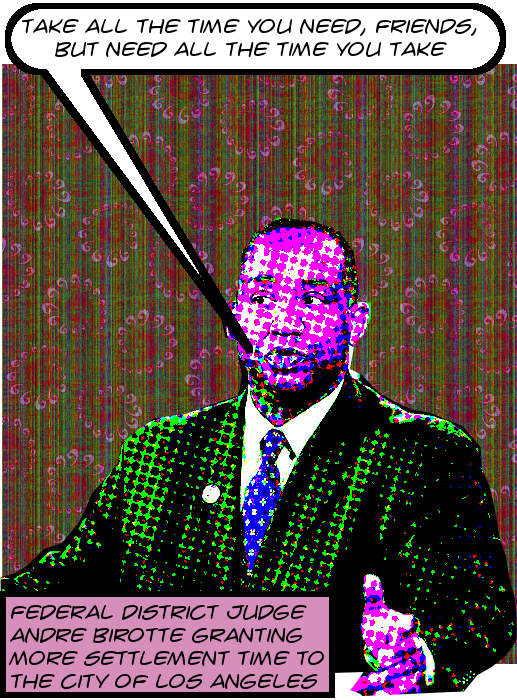 Towards the end of September the parties to this monumental lawsuit against the City of Los Angeles and the Fashion District BID filed papers with the court announcing that a settlement was in the works and asking that the calendar be put on hold.

Today and yesterday a few things happened with respect to this process. Today the parties filed a status report with the court announcing that the settlement process was on track but they needed until December 30 to work out the details. This was closely followed by an order from Judge André Birotte extending the time as requested.

More interestingly, though, yesterday the City Council went into closed session to discuss the terms of the settlement.1 They passed this motion authorizing the expenditure of $150,000 to fund the settlement, at least some of which is going, with good cause, straight to Carol Sobel. Interestingly, and the reason’s not clear, Mitch Englander voted against the motion.

It’s also interesting that the motion was put forth by Paul Krekorian and seconded by Paul Koretz. It’s my unscientific impression that in the ordinary course of events this would have been moved by José Huizar, since the events which precipitated the case happened in his district. Who knows what’s going on? Maybe it’s because Krekorian and Koretz are on the committee which gave its preliminary approval to the motion? Anyway, the whole matter is in Garcetti’s hands now, and he has until December 18 to sign off. There’s a transcription of the motion after the break.

I HEREBY MOVE that the Council ADOPT the following recommendations of the City Attorney in order to effect settlement in the case entitled Aureliano Santiago, et al. v. City of Los Angeles et al.. United States District Court Case No. 2:15-cv-08444-BRO-E (this matter concerns allegations that the City seized and destroyed the personal property of individuals selling merchandise and food on the streets of the Fashion District), SUBJECT TO THE APPROVAL OF THE MAYOR:

1. AUTHORIZE the City Attorney to expend up to $150,000 in settlement of the above entitled matter.

4. AUTHORIZE the City Attorney, or designee, to make necessary technical adjustments, subject to the approval of the City Administrative Officer; and, AUTHORIZE the Controller to implement the instructions.

This matter was recommended for approval by the Budget and Finance Committee (Krekorian – Koretz – Blumenfield – Bonin: “Yes”; Englander “No”) at its meeting on November 27, 2017, in Closed Session as permitted by Government Code Section 54956.9(d)(1).

Image of Federal District Court Judge André Birotte is ©2017 MichaelKohlhaas.Org and is a highly modified revisioning of this freely licensed guy here.