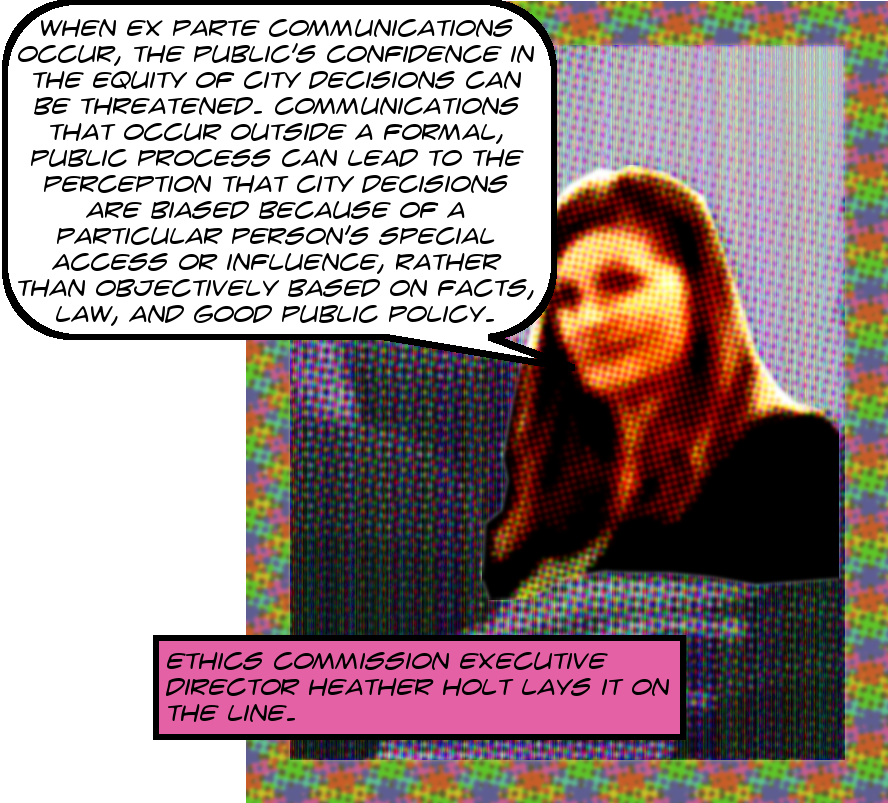 I reported last week that Serena Oberstein, Vice President of the Los Angeles City Ethics Commission, had engaged in undisclosed ex parte communications with a couple of (unregistered) lobbyists regarding a proposal to revise the Municipal Lobbying Ordinance. Of course, at present, there’s no requirement for any City commissioners, except Harbor Commissioners, to disclose such communication.

However, the example of the Board of Harbor Commissioners shows that it is possible for City commissions to adopt more stringent requirements than the rest of City government is subject to. Given the role of the Ethics Commission in defending the public interest in transparency and disclosure, it seems like a natural candidate for such a policy.

Hence, as promised, I’ve written a letter to the Commission asking them to put an item on the agenda for December 19 asking the staff to draft a policy proposal for such a requirement. Here’s a copy of the letter, and you can read a transcription after the break. If you’re moved to write about this yourself, you can, as far as I know, send communications to the Commission at ethics.commission@lacity.org.

The City of Los Angeles has struggled over the last decade to develop a City-wide policy regarding disclosure of ex parte communications for its Boards and Commissions. This process began1 with a pair of Council motions from 2007 and 2009 introduced by Councilmember Wendy Gruel.2 One result of these motions, which ultimately expired in committee without action being taken,3 was a comprehensive 2010 memorandum from your Executive Director, Heather Holt, who was at that time Director of Policy. The memo recommended that the Ethics Commission submit to Council a recommendation that Commissioners disclose all ex parte communications, which they ultimately did do. Holt’s memo eloquently states the reasons why disclosure is desirable:

I think the desirability of a policy requiring, at a minimum, Commissioners to disclose ex parte communications, is self-evident. Disclosure is an easy, efficient, and painless way to address this “information imbalance.” Furthermore, the harm done by ex parte communications is significant. As Heather Holt put the matter in that same 2010 memorandum:4
Two of the [Governmental Ethics Ordinance’s] stated purposes are to ensure that “individuals and interest groups in our society have a fair and equal opportunity to participate in the governmental process” and to ensure that “the governmental process itself promotes fairness and equity for all residents . . . .” Another purpose of the GEO is to “help restore public trust in governmental and electoral institutions.” When ex parte communications occur, the public’s confidence in the equity of City decisions can be threatened. Communications that occur outside a formal, public process can lead to the perception that City decisions are biased because of a particular person’s special access or influence, rather than objectively based on facts, law, and good public policy.

The political likelihood of a City-wide policy being developed and implemented at this time seems slim. Indeed, modified versions of Gruel’s motions were revived in 2016 by Councilmembers David Ryu and José Huizar5 and seem poised to meet the same fate as their predecessors, i.e. a quiet death by expiration.

However, it turns out that a City-wide policy is not required for individual Commissions to take action. For instance, the Board of Harbor Commissioners famously has its own disclosure policy, which requires each Commissioner to orally disclose ex parte communications at the beginning of each meeting. The opportunity exists, therefore, for the Ethics Commission to set an an example for the rest of City government by unilaterally adopting a policy on ex parte communications which includes, at a minimum, a public disclosure requirement.

I am writing, therefore, to request that, for the reasons given above, the Ethics Commission initiate a process whereby such a CEC-specific policy might be developed, discussed, and ultimately adopted. In particular, I hope you will consider putting an item on the agenda for December 19, 2017 directing staff to develop a proposal for a policy regulating ex parte communications to Ethics Commissioners and that this policy, at a minimum, should include a requirement that such communications be publicly disclosed. Given that much of the work on such a policy has already been completed by staff in response to Wendy Gruel’s motions, I think it’s not unreasonable to ask that such a proposal be completed in time for consideration at the Commission’s February 2018 meeting.

Thank you for your time and consideration,