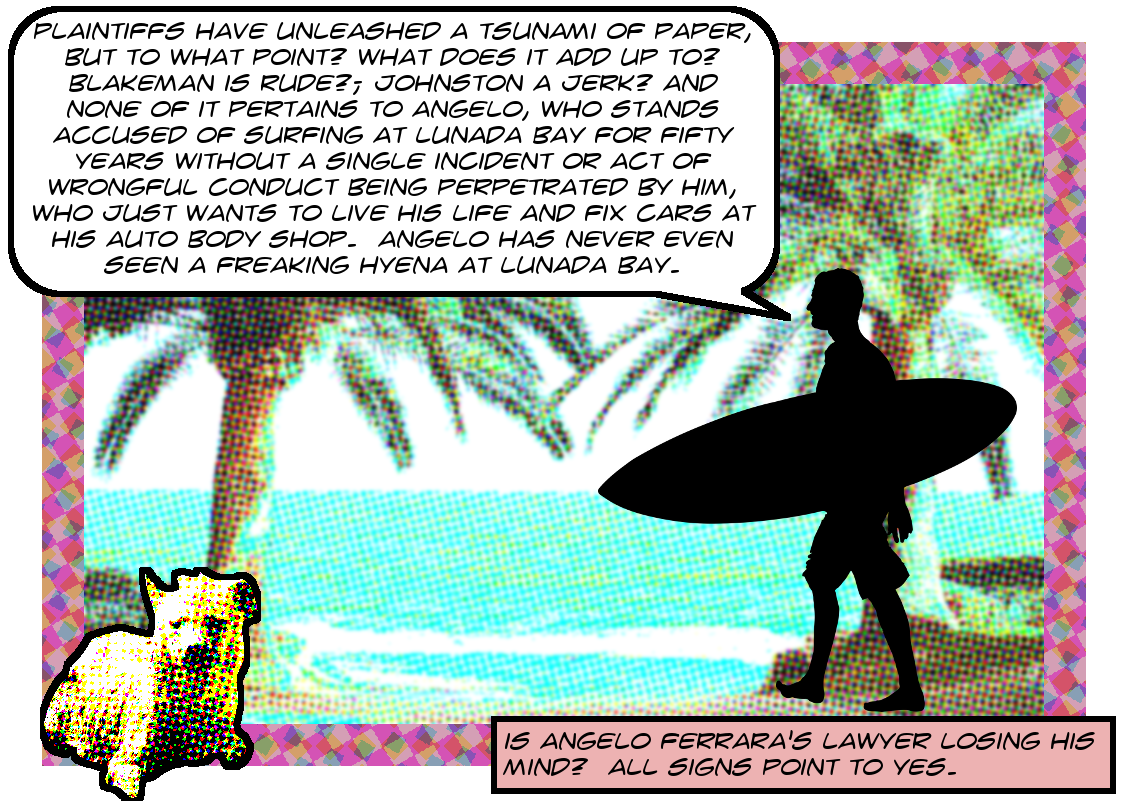 Recall that about 10 days ago the Lunada Bay Boys plaintiffs filed a motion for administrative relief asking Judge Otero to deny the steaming heap of defense motions for summary judgment. Over the last few days the defendants have filed a ton of stuff in opposition to this motion and there are links to all of it after the break.

The most astonishing item, though, is Angelo Ferrara’s reply. There’s a complete transcription after the break, and it’s certainly worth reading. The words in the cartoon above are taken from this document, and here’s another sample: “If there were an Olympic sport of throwing spaghetti against a wall to see what would stick, Plaintiffs would take home the gold.” Not the least weird aspect of this document is that the lawyer refers to his client (Angelo) by his first name throughout.

Also worth taking a look at are:

TO THE PARTIES AND TO THEIR ATTORNEYS OF RECORD:

Based on the history of this case, other Defendants will brief the issues so thoroughly that Angelo does not believe it will be helpful or necessary to add to the mountain of paper that continues to accumulate in the case, so this Reply will be extremely brief and will attempt simply to provide some overall perspective.

If there were an Olympic sport of throwing spaghetti against a wall to see what would stick, Plaintiffs would take home the gold. For instance, the so-called Expert Declaration Of Peter Neushall (Docket # 380) informs the Court that 58% of African-Americans children do not know how to swim compared to 3 1 % of white children. (Docket #380, p. 4, 11. 24 – 27. OK, what’s the Court supposed to do with that factoid?

Plaintiffs’ strategy is to bury the Court with endless declarations and exhibits. Plaintiffs’ have submitted Plaintiffs’ Additional Material Facts pertaining to all the Individual Defendants (Docket # 329). Plaintiffs to a large extent seem to be attempting to relitigate their (denied) Motion For Class Certification. Plaintiffs have unleashed a tsunami of paper, but to what point? What does it add up to? Blakeman is rude?; Johnston a jerk? And none of it pertains to Angelo, who stands accused of surfing at Lunada Bay for fifty years without a single incident or act of wrongful conduct being perpetrated by him, who just wants to live his life and fix cars at his auto body shop rather than being engulfed in this maelstrom of an overpled and overblown federal case, with maritime jurisdiction established by a thread.

Image of a silhouetted surfer representing Angelo Ferrara is ©2017 MichaelKohlhaas.Org. It was assembled from this hyena and this beach and this surfer.