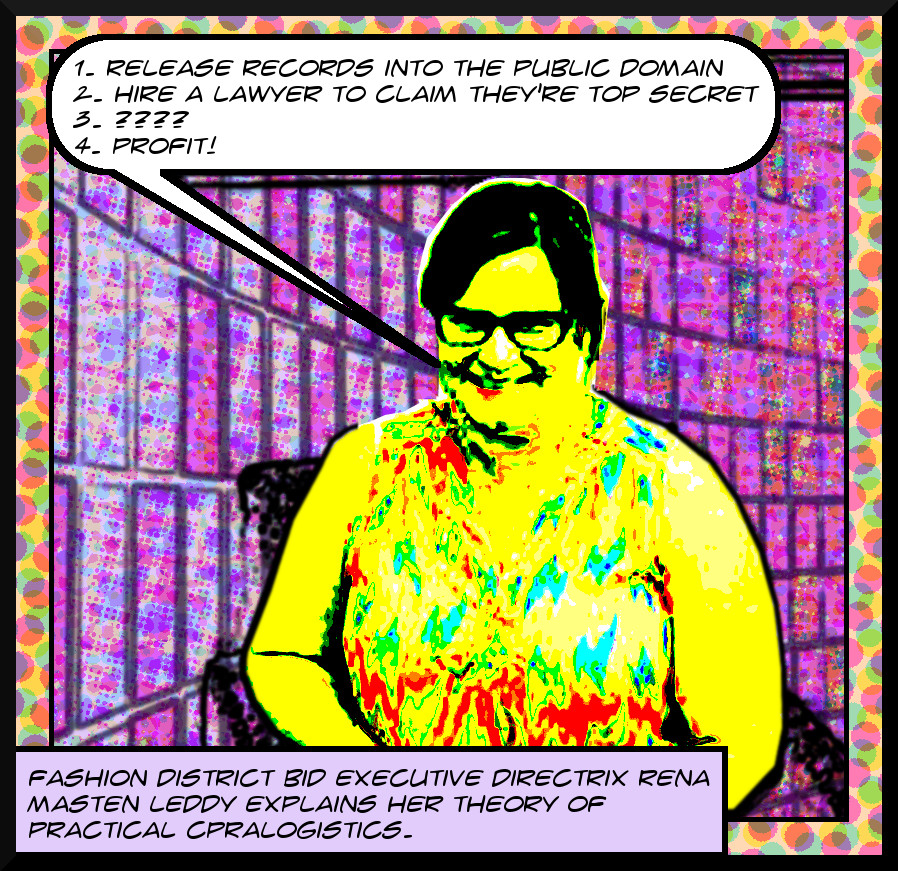 A couple days ago I published a collection of Rena Leddy’s reports to the Board of Directors of the Fashion District BID. This is turning out to be an incredibly rich source of information, revealing, e.g., that a marketing consultant hired by the BID thinks, among other deeply stupid thoughts, that lobster rolls confuse Latinos. And today I have another gem, but, for good or for ill, this one’s more technical although no less interesting.

Perhaps you recall that Urban Place Consulting is working for the Fashion District coordinating the BID’s pending renewal with the City. I obtained UPC’s contract with the BID from Rena Leddy via the California Public Records Act, but she claimed that the chart showing the actual hourly rates of UPC bossboy Steve Gibson and his assorted flunkies was exempt from release because it was a trade secret. Then we spent three months arguing about it and everybody got lawyered up and eventually she gave in and sent me an unredacted copy of the contract showing how much money all the UPC folks were getting paid.

Well, it turns out it was all for nothing. You see, in October 2016, UPC submitted a proposal to the BID for the consulting job. Here is a copy (transcription after the break, as always). And Rena Leddy included this proposal in the November 2016 Board Packet. And the proposal contained an unredacted copy of the cost matrix. To see why this action of Rena Leddy’s obviated our entire subsequent dispute about whether or not the cost matrix was exempt, turn the page, friend!

(a) …agendas of public meetings and any other writings, when distributed to all, or a majority of all, of the members of a legislative body of a local agency by any person in connection with a matter subject to discussion or consideration at an open meeting of the body … shall be made available on request without delay. … (c) Writings that are public records under subdivision (a) and that are distributed during a public meeting shall be made available at the meeting if prepared by the local agency…

This is one of the same sections that tripped up batty little fusspot Blair Besten, executive directrix of the Historic Core BID, last June. What it means for our purposes is that all materials that are passed out to the Board of Directors of the Fashion District BID must be shown to all members of the public immediately at the meeting itself. They are by law not exempt from production at all, so therefore not exempt from production under the public records act.

Well, you might say,1 perhaps the law only requires such materials to be shown to members of the public who are present at the meeting itself, and they’re still exempt with respect to other people. It turns out, though, that the legislature already thought of and shot down that argument. Take a look at CPRA §6254.5, which states in pertinent part:

… if a state or local agency discloses a public record that is otherwise exempt from this chapter, to a member of the public, this disclosure shall constitute a waiver of the exemptions specified in Section 6254 or 6254.7, or other similar provisions of law.

In other words, BANG! Show it to one member of the public, show it to all of them. Note that this section does not require that the record be disclosed under CPRA, but just that it be disclosed. In other words, if a record appears in a board packet that’s distributed at a meeting that’s subject to the Brown Act, all exemptions under CPRA are forever waived.

And what that all adds up to is that when Rena Leddy emailed be in April claiming that the hourly rates of Steve Gibson and his minions and minionettes were top secret, she’d already lost. The exemption, even though it was delusional, was already waived. So this question is really clamoring for an answer: Why did she spend the BID’s money on a lawyer to explain to me that they did not have to give it to me but they were anyway ’cause they’re nice? Well, we’re never going to know, and we have the record, so that, I suppose, is that.

Thank you for your interest in Urban Place Consulting Group and our consulting services. At your request we have developed the following proposal for BID renewal consulting services. The budget defined in this proposal is based upon DPOA staff assuming responsibility for the majority of the database development and property owner communications, including managing both the petition and ballot drives. Urban Place Consulting will be primarily responsible for the following areas:

The total budget for the above services for the development of a management plan and engineer’s report is $55,712.20 which includes $49,220 of consultant labor, $6000 of sub-consultant, engineer labor and an administrative budget of $492.20. The proposed budget is further detailed in the attached labor matrix. The budget is also based on ten steering committee meetings. If fewer meetings or more meetings are necessary, add or subtract at the rate of $700 per meeting if two members of Urban Place attend.

Because of our extensive experience working with the Fashion District we have been able to lower the cost of our renewal consulting services. The proposed cost is $7657 less, 12% less, than our 2012 contract for similar services. If this meets with your approval, we will forward a contract that reflects this proposal and defines the relationship between Urban Place Consulting Group and the Downtown Property Owners Association. We look forward to working with you and your staff to successfully renew the Fashion District BID.

The image of Rena Leddy started out at the Downtown News and ended up here, mutilated beyond recognition and now ©2017 MichaelKohlhaas.Org.