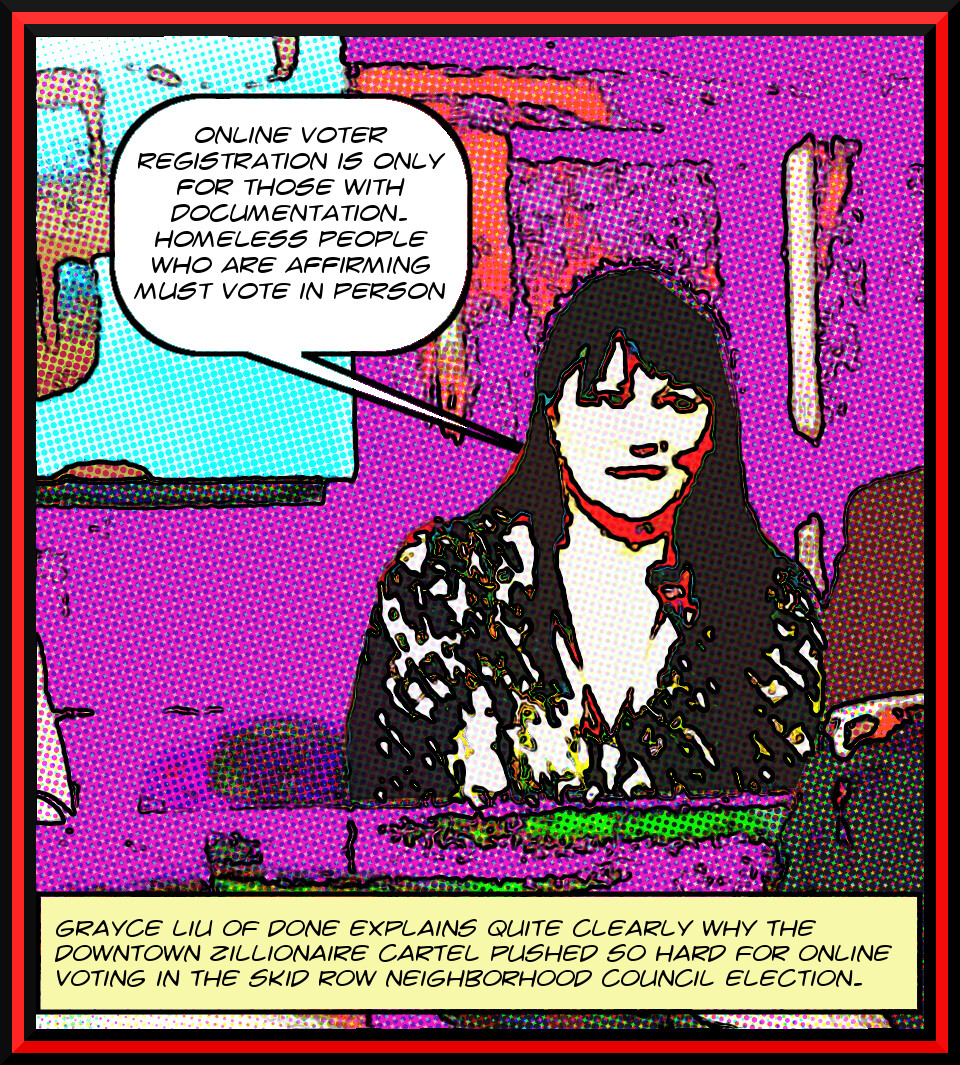 Recently I obtained a few emails which shed even more light on the already unbelievable injustice worked upon the Skid Row Neighborhood Council Formation Committee by CD14 rep José Huizar. As has already been widely reported he unilaterally imposed online voting less than two weeks before the election. He did this in the face of explicit testimony that homeless residents would be irremediably disadvantaged by their relative lack of access to the Internet, a problem known as the digital divide.

He also ignored the serious problem that allowing online voting automatically registered more than 1,000 voters who could reasonably be expected to vote against the SRNC formation effort.1 These 1,000 voters obviously determined the outcome of the election given that, according to Gale Holland of the LA Times, there were 1,398 online ballots cast and 807 were cast against the SRNC.

Now, in addition to these trangressions, newly obtained emails reveal the fact that homeless people without adequate documentation were forbidden from voting online. Also, even non-homeless people, even people as powerful as Carol Schatz and Scott Gray,2 who did have adequate documentation had trouble registering to vote online and were assisted on an individual basis by Department of Neighborhood Empowerment staffers Stephen Box and Mike Fong. How much more difficult, then, was it for homeless people who weren’t on a first name basis with City staff, to register?

Finally, an email from Grayce Liu reveals that online registration was cut off at 11:59 p.m. on April 2, four days before the election. It appears from the Council File that the Council’s approval of online voting wasn’t finalized until March 28, which means that it ran for less than a week. This shows the role of the preregistered 1,000 voters mentioned above to be even more crucial than previously thought, given that proponents had to start essentially from scratch with the difficult process of online registration.

My understanding is that some stakeholders are receiving special treatment and that they do not have to 1) register, or 2) have an address, or 3) produce ID. How is this equitable???

Yes, Scott Gray is actually complaining that homeless people, who don’t have an address because they’re living on the street in a freaking tent if they’re freaking lucky, are not required to have an address to vote whereas he, who does have an address but who is fortunate enough to have a freaking house to go with it, is required to supply said address in order to register to vote online. According to Scott Gray, this is not only unfair, it’s three-freaking-question-marks unfair, which, if you’re keeping score, is really, really unfair!!!

For whatever reason, it doesn’t seem to have occurred to him to give up his own house if it’s so darned important for him to share in the manifold inequitable advantages bestowed by the ever-gracious City of Los Angeles upon its homeless population, every last one of said avantages clawed away from the long-suffering, put-upon, not-specially-treated, deserving grasp of zillionaires like Scott Gray. In any case, Grayce Liu’s response is possibly more revealing than she meant it to be:

All stakeholders have to register and provide an address. Homeless people only need to self affirm their information and not provide further documentation if they do not have them. Online voter registration is only for those with documentation. Homeless people who are affirming must vote in person at the poll on April 6th.

Scott Gray’s clueless bitching aside, what’s really interesting about this exchange is Grayce Liu’s revelation that people without documentation, who must self-affirm their eligibility, are not allowed to vote online. I don’t believe she mentioned this in her testimony before the Rules and Elections Committee. Obviously this effect severely disadvantaged homeless voters and thus constituted yet another injustice in a severely unjust election.

Scott Gray’s other comment in that same set of emails has to do with the fact that, even with all his social advantages, even with his house and his complete set of documentations, even with all that, he can’t figure out how to register online:3
I have attempted to register on-line two times, the second to include my ID, for the on-line registration to vote yesterday. So far, there is no reply from your office? What is the status?

And Grayce Liu is totally on top of that:

My staff is following up with you on your voter registration now as I understand that you did not provide all of the necessary documentation to register online.

And amazingly enough, they did follow up. Here is an email exchange between Scott Gray and various DONE staffers, discussing a number of things, but on April 4, they were discussing Scott Gray’s online registration, which he never did manage to figure out. Even that, it seems, is an occasion for whining;

Because i have never received approval for online registration or a PIN, I decided to vote today at the pop up poll at 420 E 3rd. I have been waiting in line for 1.5 hours and there are still 10 people in front of me.

And Stephen Box, in that impenetrably might-be-sarcasm-hard-to-say tone that veteran City staffers habitually acquire as a result of their long experience dealing with the public, responds cheerfully:

Thanks for your email!

You registered last week with your California Drivers License but you did not submit any documentation with an address that qualified you as a Stakeholder. I worked with you to determine how you could demonstrate that you are a qualified stakeholder and you subsequently submitted a roster on Friday which we used to qualify voters, including you, yesterday.

Voters who were verified yesterday are being sent their credentials today but since you have already voted at the Pop-Up Poll, you will not be receiving credentials.

I apologize for the long wait at the polls but at the same time am pleased that there is such an enthusiastic crowd that is eager to vote.

Thank you for participating in the Skid Row Formation Election!

The theme of whining privileged zillionaires complaining to DONE staff about their inability to deal with the online registration process that José Huizar unilaterally imposed on the SRNC at their whining privileged zillionaire behest continues in this exchange between Carol Schatz and Mike Fong. Thus whined Carol “The Zillion Dollar Woman” Schatz:

On 4/28, I registered online to vote and still have not received my username and pin. Please let me know what can be done to find out why my verification has not been completed by now.

She probably means 3/28, but that kind of mistake can happen to anyone, even zillionaires; doesn’t mean they’re six-fingered morons.4 In any case, Mike Fong got right back to her:

Hope you are doing well.

Thank you very much for your email. We are checking on your registration and will keep you posted as soon as possible.

Thanks and keep up the great leadership in the community.

More substantially, and finally, let’s go back to this email conversation between Scott Gray and various people. Also revealed here is the fact that Scott Gray was not just trying to get himself registered to vote online, but also to get a whole list of his employees registered. DONE, of course, was helping him out at every step. This, of course, is mighty rich coming from a man who, on hearing of the SRNC formation effort, emailed a buddy of his to complain that:

20,000+ homeless people live downtown and they will be carted up to vote!

And that’s the SRNC-FC news for today, friends. Maybe this is the last of it, but somehow I doubt it. Stay tuned!

Image of Grayce Liu is a heavy, deep, hardcore, highly transformative modification of this image from the Twitter feed of Elisabeth Erlandsson and our version is now, friends, by law determined to be ©2017 MichaelKohlhaas.Org.